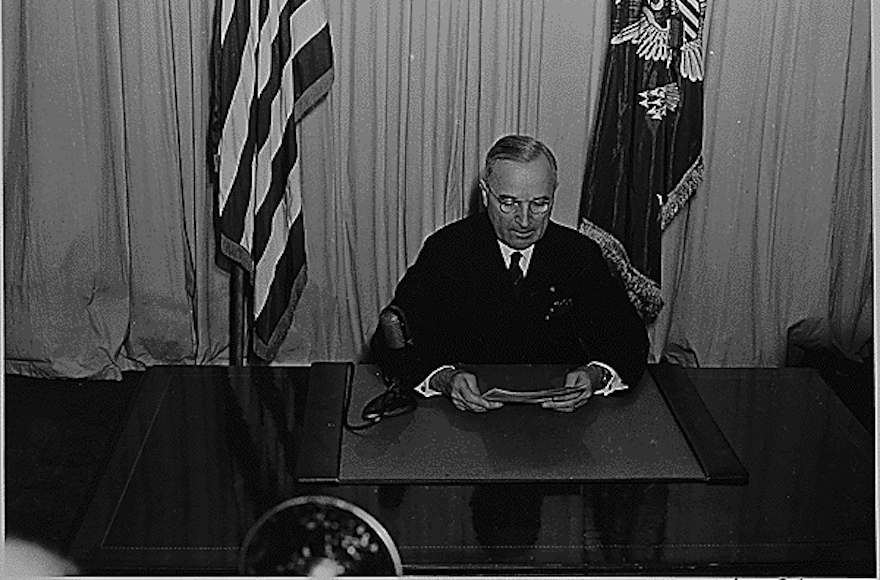 An angry President Truman demanded Israeli withdrawal from territories occupied during Israel’s War of independence but was rebuffed by the nascent Jewish State, according to documents released by the State Department last week.

The document, entitled “Foreign Relations of the United States, 1949,” reinforce the view that the 1949 State Department, whose Near East Affairs Bureau was dominated by Arabists, was actively lobbying against Israel. Previously classified diplomatic notes, cables, and memoranda also depict Truman as waffling in his support for Israel.

According to the documents, Truman delivered an angry note to Israel on May 29, demanding Israel withdraw from territories captured during the 1948-49 fighting. In a formal note to the U.S. Government dated June 8, Israel rejected the American demand. Noting that it was the Arab states that had initiated the war in defiance of the 1947 UN partition resolution, the note insisted that “the Arab attack… had created a new situation”.

A “top secret” State Department memorandum to Truman two days later called upon the U.S. to adopt a hard line attitude toward Israel in an attempt to pressure her to return to the partition lines. The memorandum suggested “the following course of action vis-a-vis Israel:

“(1) Immediate adoption of a generally negative attitude toward Israel. This would include; refusing Israeli requests for U.S. assistance, such as for the training of Israeli officials in this country and the sending of experts to Israel. Maintenance of no more than a correct attitude toward Israeli officials in this country and toward American organizations interested in promoting the cause of Israel, and failing to support the position of Israel in international organizations.

“(2) Holding up allocation of $49 million of a $100 million Export-import Bank loan earmarked for Israel and (3) lifting the tax-exempt status of the United Jewish Appeal and other American Jewish fund-raising organizations.”

The then U.S. Ambassador to Israel, James G. McDonald, who is shown to be sympathetic toward Israel, later cabled White House aide Clark Clifford, another Israeli sympathizer, to inform him that Truman’s note had “embittered Israeli opinion” and that Premier David Ben Gurion and foreign Minister Moshe sharett might be forced “despite their will and better judgment to resist U.S. demands.”

The State Department documents include over 1800 pages of previously unpublished material on American policy in the Middle East during 1949. More than 1,000 pages relate to U.S. interests in the Arab-Israeli conflict and “the future status of Palestine”. Included are diplomatic notes, cables, memoranda and other top secret documents relating to Israel’s admission to the UN, the setting up of the U.S. Embassy in Tel Aviv rather than Jerusalem, and the Israeli-Arab armistice agreements.