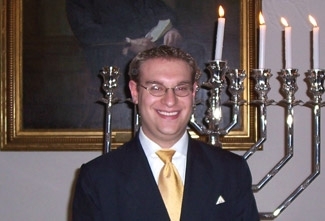 WASHINGTON, May 31 (JTA) — The White House has switched its main contact with the Jewish community once again, this time looking to a 26-year-old from the president’s scheduling office. Jeffrey Berkowitz was named the White House liaison to the Jewish community Tuesday, replacing Noam Neusner, who held the position for a year and now serves as spokesman for the Office of Management and Budget. Berkowitz had served as Neusner’s deputy for Jewish issues in recent months, familiarizing himself with the community. He spoke to several groups last week at the American Israel Public Affairs Committee policy conference, and has been consulting with Jewish leaders in Washington. The appointment of a liaison with little connection with the Jewish organizational world may raise some eyebrows, given the Republican Party’s push to make inroads into the Jewish community. But Jewish leaders stressed that many organizations have connections to senior people in the White House, including Neusner and other high-level Jews in the administration. The naming of a Reform Jew also is interesting, given the broad support President Bush has received from Orthodox and more religiously conservative Jews. It comes at a time when Bush may need to court support from more liberal Jewish groups, who say they have been shunted aside and shut out of meetings with senior administration officials. Many of these liberal groups are more supportive of Israel’s plan to withdraw from the Gaza Strip, which Bush has endorsed, than the Jewish groups and leaders Bush has formed ties with. Berkowitz, who declined to comment on the appointment, will maintain his main job as associate director of scheduling, where he coordinates and vets appointments for Bush and helps plan major events. He previously worked for the Republican National Committee as a foreign policy and defense analyst, and on the 2005 presidential inaugural committee. He worked briefly earlier this year as press secretary for the Republican Jewish Coalition. William Daroff, the RJC’s deputy director, said Berkowitz’s energy would make up for any lack of institutional relationships. “Jeffrey Berkowitz is an incredibly hard-working, intelligent and articulate professional,” Daroff said. “His time at the RNC brought him into the room with the top people and government leaders of our party.” Berkowitz is the fourth man to hold the portfolio under Bush. Neusner’s predecessor, Tevi Troy, returned to the White House earlier this year as deputy director of domestic policy. Adam Goldman, Bush’s first liaison, is a consultant in Austin, Texas. Rabbi Levi Shemtov, Washington director of American Friends of Lubavitch, has met with Berkowitz, and said knowledge of the Jewish community is not as important as access to the president and other senior administration officials. Berkowitz’s day job may give him such access. Indeed, Jewish leaders worked well with both Troy and Neusner, who took on the Jewish portfolio in addition to their senior administrative roles. “Jeff knows the community somewhat and is eager to learn more at this point,” Shemtov said. “But what probably matters more is how close he is to the president.” Berkowitz, a New Haven, Conn. native, attended American University in Washington and worked at several think tanks and trade associations before joining the RNC in July 2002. He was active in Hillel in college and is a member of Alpha Epsilon Pi, a Jewish fraternity. Berkowitz is not expected to take on any Middle East policy tasks in his new position, despite his background in the area, sources told JTA. Traditionally, Jewish liaisons have tried to steer away from national security issues.