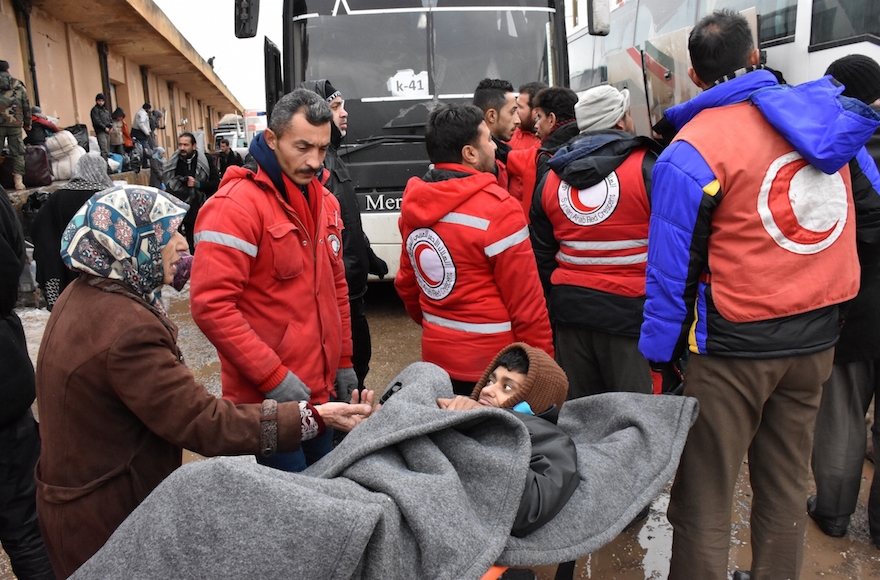 A Syrian civilian being loaded into a bus by members of the Syrian Arab Red Crescent at a makeshift shelter in Jibrin on the eastern outskirts of Aleppo, Dec. 22, 2016. (George Ourfalian/AFP/Getty Images)
Advertisement

(JTA) — Aleppo, one of the world’s oldest cities and Syria’s largest metropolis, is synonymous with one of humanity’s cruelest conflicts — now surpassing the siege of Sarajevo as the deadliest and longest-running battle for a city in our time.

With an estimated 31,000 deaths, the battle for Aleppo has taken more than double the lives lost in Sarajevo. With total Syrian civilian deaths over the past five years reportedly totaling some 450,000, including 50,000 children, the latest atrocities in Aleppo write another dreadful lament in the 21st-century dirge of savagery and indifference. 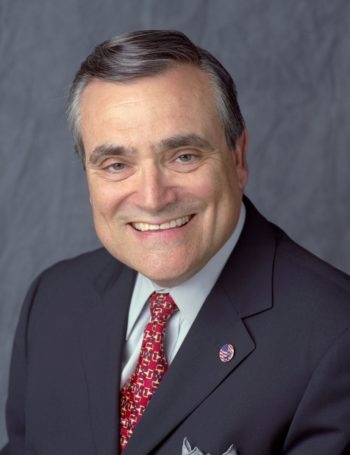 Steven B. Nasatir (Courtesy of the Jewish United Fund/Jewish Federation of Metropolitan Chicago.)

The world has failed to stop the carnage and the suffering, let alone adequately condemn it. Witness the morally bankrupt record of the U.N. General Assembly, which singled out Israel 20 times — and Syria just once — in 2016. Ironically this comes at a time when the people and government of Israel not only have spoken out, but have contributed significantly to aid Syrian victims, despite the history of enmity between the two countries.

In Israel, in Chicago, and in Jewish communities and federations elsewhere, indifference to the suffering of innocents is not an option. Through our Aleppo Assistance Fund, members of our community have an opportunity to respond through a Jewish lens. Contributions go to the national American Jewish Coalition for Disaster Relief, of which our federation is a member. During the past three years, the coalition has provided nearly $2 million of humanitarian aid to Syrians, reaching hundreds of thousands of people with medical supplies and assistance, especially for women and children with severe medical conditions due to abuse, torture or mutilation, and worse.

Locally, during the past few years, our federation has fostered relationships and provided educational programs with key Chicago Syrian community organizations. Everyone recognizes that the humanitarian catastrophe transcends political differences. Both Jews and Syrians hope this shared humanitarian concern for innocent civilians can pave the way for improved relations. The Syrian community recognizes and sincerely appreciates the Jewish response to this crisis.

We are heartened but not surprised by these developments. The Israeli government and Israel Defense Forces — most notably the IDF Medical Corps — continue to aid wounded civilians in the field, transferring many to Israeli hospitals. In addition, Israelis have launched grassroots efforts, such as the Just Beyond the Border crowdfunding campaign, to send emergency supplies and other aid to children in Syria. We are inspired by their actions.

During this dark time, Hanukkah brings its distinct message of perseverance and hope. We have a special Jewish obligation to bring light. As individuals, we do this through tzedakah, righteous giving. We do this by helping to bring food, medical care, shelter and other forms of relief to victims of war, terrorism and natural disaster.

The Torah teaches that in any situation of human suffering there are three parties: the oppressed, the oppressors and the indifferent. The indifferent, those who stand on the sidelines with folded arms, are allies of the oppressors. Our deep Jewish memory of persecution compels us to heed the command of the Torah not to join the tribe of folded arms, not to stand silent while the blood of our fellow humans is shed.

At a time in our country and community of overheated political rhetoric coming from all sides, with calls to federations for public statements on all sorts of issues, it is important that we come forward and announce: Enough with requests for political statements that divide a community — more important is to watch what we do. Doing for others — together — is the foundation of a strong and united community. Especially now, as we prepare to celebrate Hanukkah, we know that to ease someone’s suffering brings light and turns away evil.