Eastern Europe is changing. How we deliver care to Jewish elderly has to change with it. 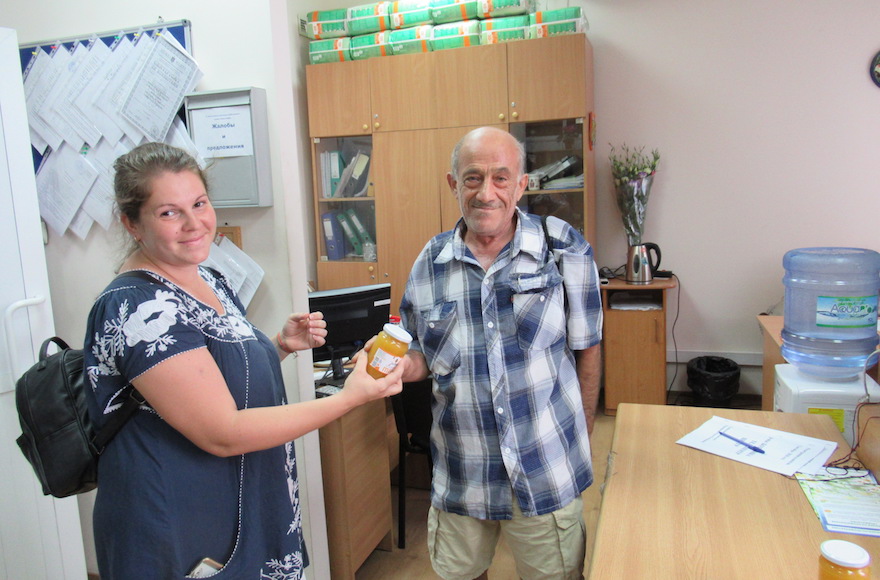 (Courtesy of the JDC)
Advertisement

NEW YORK (JTA) — In business, an effective planning process is essential for success. During the High Holidays, Jews are urged to engage in this sort of process for our own lives. We reflect on the past year, seeking lessons to help us in the coming year. Are we committed to the right ideals? Are we living up to them? When others need us, do we answer the call?

As we look for opportunities to help others in the new year, and consider the best way to do so, we should remember a group that too often is forgotten: elderly Jews in the former Soviet Union.

They have lived unimaginably difficult lives. Most endured the devastation of World War II, and nearly half survived the Holocaust. All lived under a communist regime that discriminated relentlessly against Jews and dismantled Jewish institutions.

They are also the world’s poorest Jews, unable to buy basic necessities. Even retired engineers and doctors have government pensions as low as $2 per day.

While the elderly population of post-Soviet states generally rely on their children for care, elderly Jews often are alone. Many of their relatives left the region decades ago when more than 1.5 million Jews immigrated to Israel, Western Europe and the United States following the fall of communism.

For almost three decades, my organization has mounted a historic humanitarian effort to provide life-saving care to these elderly Jews. The impact of this support is incalculable. It is no exaggeration to say that thousands would die without it.

To save over 90,000 lives, we are spending approximately $115 million this year on food, medicine, winter relief and home care. The Claims Conference provides approximately $90 million for Holocaust survivors, and another $25 million comes from the Jewish Federations of North America, the International Fellowship of Christians and Jews, World Jewish Relief, the Maurice and Vivienne Wohl Charitable Foundation and other partners.

Although these sums are large in the aggregate, the cost per person is astonishingly low. On average, for clients who do not receive Holocaust restitution, $21 pays for food and medicine for an entire month. On average, $4 pays for an hour of home care.

Unfortunately, providing this care is becoming more difficult. Our costs are rising. Inflation in Ukraine is 9 percent, and wages for care workers have increased significantly.

We also face a major long-term challenge: the end of Holocaust restitution. This year, restitution covers approximately 80 percent of the program’s budget. But this funding is available only for Holocaust survivors. Even though restitution dollars increased in 2018 – since survivors need more care as they age – this funding level will decline inevitably over the coming decade as survivors pass away.

But after this funding is gone, elderly Jews who are not survivors will still need life-saving care, and we have over 45,000 of those clients today. Caring for them will be much more difficult, since restitution has helped fund our infrastructure: a network of welfare centers to provide supervision, training, financial oversight, and places for elderly and others to gather.

In the spirit of the High Holidays, my organization has responded to these challenges with an extended period of self-reflection and analysis over the past two years. We know we cannot abandon these elderly Jews. We are committed to maintaining life-saving care. But we cannot keep providing it in the same way that we have before.

So we have resolved to modernize and streamline our operations to get the most out of every dollar. For example, instead of delivering food, we provide bank cards to those who can buy food themselves.

We also are consolidating welfare centers in places where the number of elderly we care for has declined significantly.

To be clear: Clients are continuing to receive the individual care that has sustained them all these years, but the supervisory and administrative functions are taken up by larger welfare centers in the region.

Heartbreakingly, the elderly we serve in these places have to adjust to changes that can take an emotional toll, ones we are trying to alleviate as best we can. Such changes have attracted attention in the media recently when we closed large buildings – expensive to maintain and often where community gatherings traditionally take place – to ensure ongoing care for those who remain.

To alleviate this stress on people who have already suffered so much, we are making accommodations where we can to continue the same or similar activities. Indeed, for Rosh Hashanah this year, thousands of elderly will still celebrate the holidays in a series of festive lectures and concerts, cooking workshops and cultural performances. They will also be visited in their homes by volunteers delivering apples and honey.

By dispatching more volunteers like these around the region – especially young people – we will combat loneliness, a critical issue facing these elderly. In addition to comforting lonely seniors, this program builds a sense of obligation among the volunteers themselves. Over time, these future communal leaders will help shoulder more of the responsibility of providing care.

In Ukraine recently, an elderly woman called the help she received from us “the sunshine in my window.”

In the coming years, there will be tens of thousands of seniors just like her, desperate for the warmth of that same sunshine. But it’s only together that we can can provide this aid.

In doing so, we elevate our concept of community to a global scale. By helping those most in need, we’re being true to our best selves, not just in 5779 but for future generations.