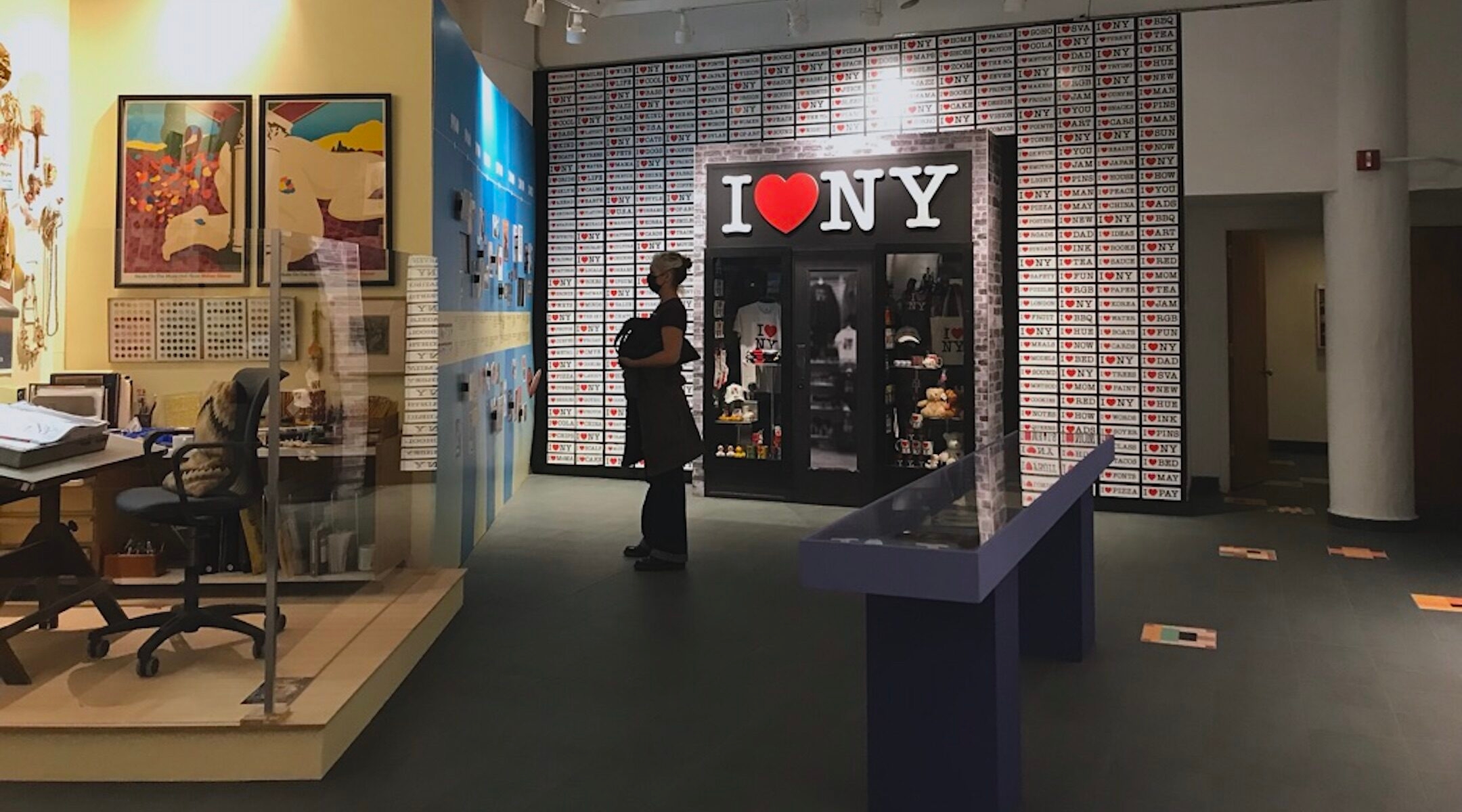 In a tribute to his life and work, the School of Visual Arts’ Gramercy Gallery puts Milton Glaser’s love for New York on display, complete with a wall covered in the iconic logo which he famously designed in the back of a taxi cab in 1976. (Julia Gergely)
Advertisement

(New York Jewish Week via JTA) — Most New Yorkers recognize the “I Love New York” logo, which can be found on everything from coffee mugs to snow globes to boxer briefs. Fewer, however, might recognize the man behind the logo, Milton Glaser. One of the most prolific graphic designers of the 20th century, his designs helped shape the experience of New York for the last half century.

A new exhibit at the School of Visual Arts’ Gramercy Gallery, “SVA ❤️ Milton: The Legacy of Milton Glaser,” attempts to capture the process and the legacy of the designer, who was a professor at the school from 1960 until 2017. The exhibit invites visitors to explore just how much graphic design — and Glaser’s designs, in particular — shapes our every day. Among the displays from Glaser’s impressive body of work are album covers, a “Mad Men” poster, New York Magazine covers (Glaser co-founded the magazine in 1968), the Brooklyn Brewery logo, the DC Comics logo, the Celebrate Israel Parade logo and much more.

“There’s some stuff that people have interacted with continually over the course of their lives — you know, a million times — but maybe didn’t even realize it was Milton Glaser’s work,” said Beth Kleber, head of SVA’s Milton Glaser Archives, which opened in 2003.

An introduction panel into the exhibit explains Glaser’s pedagogy, “Art for Life” — his belief in building a common experience in art diffused throughout the city. A lifetime New Yorker, Glaser was born in the Bronx in 1929. He attended the High School of Music and Art (what is now LaGuardia High School of Music and Performing Arts) and graduated from Cooper Union College in 1951. He co-founded the influential Push Pin Studios in 1954, and throughout his career, Glaser showed his love for the city through his designs.

“It’s really profound,” Kleber said as she considered how much of his work shaped New York and its culture over the last half-century. “New York City was so important to him. It gave him excitement, all the intellectual and cultural stimulation you get from living here. It’s the basis for a lot of his work.”

Glaser was Jewish, although he didn’t discuss it often. Still, many of his design ideas came from his Jewish background, and the idea that he never felt “at home in any culture,” as he said in a 2009 interview with Hadassah Magazine. 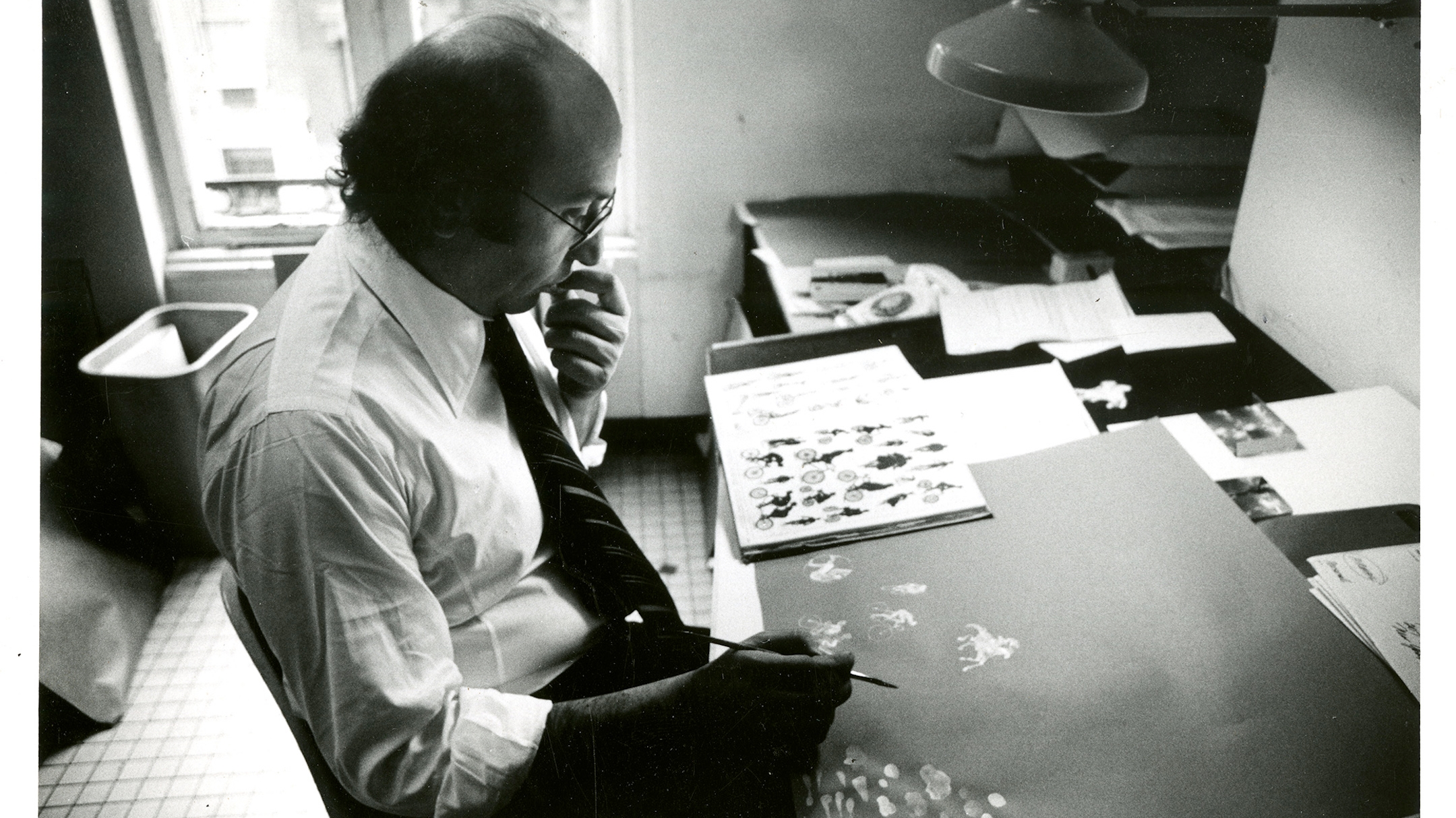 Glaser’s designs came from a deep love and appreciation for the city, and they championed the idea that art can exist anywhere. As the New York Times wrote on Milton Glaser’s 90th birthday, “no one hearts NY quite like Milton Glaser.” (Cosmos Sarchiapone)

A recreation of Glaser’s desk takes up a large portion of one of the rooms in the exhibit, and showcases the way Glaser found design in everything, from shells to a box of pencils to coins and stamps. In a section titled “The Work Behind the Work,” viewers get to see early drafts of different poster prints made throughout Glaser’s career. The city — all the different objects and ideas it contains — comes to life on Glaser’s pages through this visualization of his creative process.

“It was so hard when we were all dispersed and mostly working from home to celebrate him in a way that really felt meaningful,” Kleber said. “Once we were back in the office, we felt like we had an opportunity to present his work in a way that most people could benefit from.”

Another part of the exhibit is set up almost like a miniature city block, so that all of Glaser’s designs can be given their own context. A makeshift book stand showcases his book jackets; nearby is a restaurant-like booth that holds his food and wine labels. A faux record store features dozens of the album covers he’d done over the years.

“It’s a really fun way to experience his work, putting it into real world context,” Kleber said. “It was a way to better introduce him, or reintroduce him to students and to people who might recognize some of the stuff but not know who was responsible for it.”

“SVA❤️ Milton: The Legacy of Milton Glaser” is on view through Jan. 15, 2022 at the SVA Gramercy Gallery at 209 East 23rd Street. Advance registration is required.