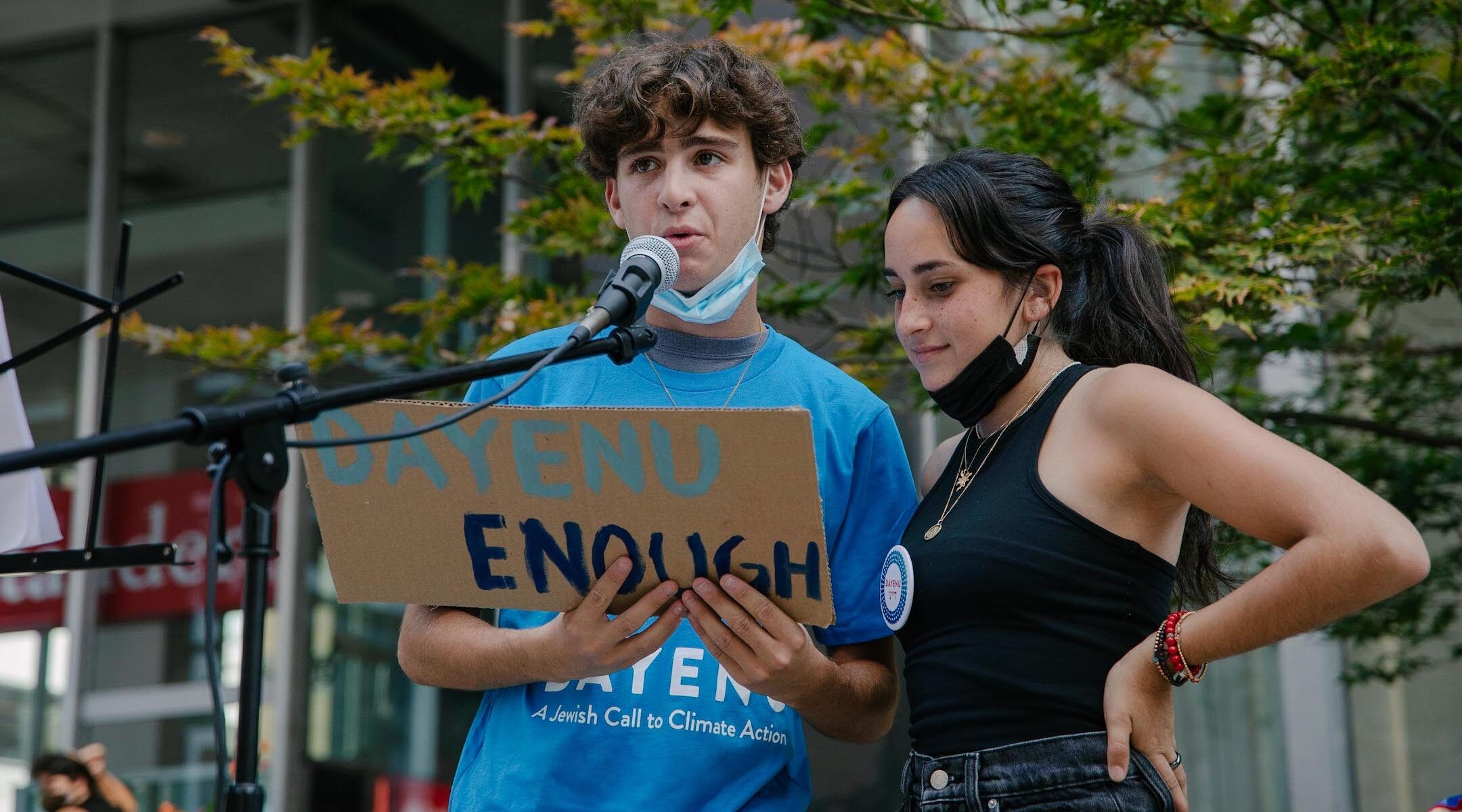 Participants at an event with Dayenu: A Jewish Call to Climate Action hold a sign that says "Dayenu/Enough." (Rachel Warriner)
Advertisement

(JTA) — The passage of a milestone climate bill in Congress on Friday means major progress on a policy issue that American Jews rank above all others in recent surveys of voter priorities.

While climate change is not often pegged as a Jewish issue — unlike, for example, abortion or Israel — a set of poll results suggest concern about it is nearly a consensus in the community.

Already eight years ago, a survey from the nonpartisan group Public Religion Research Institute found that a far larger percentage of American Jews believed that climate change was a concern than Americans as a whole do. At the time, an estimated 8 in 10 American Jews said the planet is facing a crisis or a major problem.

It’s not just that Jews find the climate situation alarming because they tend to be liberal, and that liberals are far more likely than conservatives to prioritize the issue. According to recent polling, Jews not only care about climate — they also seem to prioritize over almost any other issue.

For example, a 2020 election exit survey of 800 Jewish voters by J Street, a liberal pro-Israel group, found that climate change ranked second after the COVID-19 pandemic among issues determining who they picked in the presidential contest between Donald Trump and Joe Biden — above health care, the economy, racial justice and other matters.

Two subsequent polls add to this impression. In 2021 and 2022, the Jewish Electorate Institute, a group led by prominent Jewish Democrats, conducted national surveys of Jewish voters and found that the top issue they wanted President Biden and Congress to focus on was climate change. Voting rights and the economy came in second and third in both cases.

About two years ago, a new group called Dayenu: A Jewish Call to Climate Action launched seeking to harness the overwhelming level of worry American Jews seem to have about how greenhouse gas emissions are wreaking havoc on our weather and oceans.

According to Dayenu’s chief strategy officer, Phil Aroneanu, there has long been a widespread desire among Jews to be more green as individuals and to organize as Jews for systemic change.

“That’s why we’re drinking out of a firehose when it comes to Jews engaging with Dayenu and our campaigns,” he said.

Margery Cooper, a member of Congregation Beth Elohim in Brooklyn, was inspired to help start one of 80 local Dayenu chapters that now exist around the country and abroad.

“In our congregation, people sometimes ask why we are involved in this issue,” Cooper said. “For myself, I have 30-year-old children and I don’t say this to them, but when they talk about having, you know, future children, I am terrified. And then we’ve got the rabbi who’s a young mother, and she talks about having to hide with her daughter in a closet during intense storms. And then we’ve got other parents whose children see pictures of wildfires and can’t sleep at night.”

Senate Majority Leader Chuck Schumer, who spearheaded the passage of the Inflation Reduction Act, as the $370 billion climate bill is known, attends services with Cooper as a fellow congregant at Beth Elohim.

When Cooper helped organize a Jewish climate rally in Park Slope last year, Schumer showed, marking a high point in Dayenu’s visibility and providing a piece of evidence that climate can be effectively galvanized as a Jewish issue.

The very fact there’s a near-consensus might be the reason climate has been under the radar as a Jewish issue, according to Leonard Saxe, a social psychologist at Brandeis University who conducts demographic research on Jews.

“If there were two Jews arguing about climate change, Jewish journalists would be reporting on it — because it’s a fight,” he said. “Perhaps it’s not an issue because there’s not much debate in the Jewish community about it.”