The Canadian Jewish Congress urged the National Hockey League today to re-open its investigation of an anti-Semitic incident that occurred during a game here last March and to make punishable under its rules the use of epithets “which degrade and humiliate the individuality and dignity of all of us.” The Incident involved anti-Semitic taunts and […]

Report Jewish Hockey Star Playing for Reich Against Will

Rudi Ball, Jewish hockey star, will play on the German team against an American aggregation at the opening of the Winter Olympic games at Garmish-Partenkirchen tomorrow, it was learned today. The Jewish Telegraphic Agency learned reliably that he is playing against his will, having yielded to "persuasion" by Nazi sports authorities. 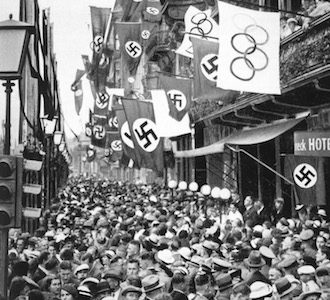 The Associated Press, in a dispatch from Garmisch-Partenkirchen, scene of the Olympic Winter games, reports that Rudi Ball, German “non-Aryan” ice hockey player who was a self-exile in Paris and Milan, has joined the German Olympic team at the invitation of the Reich sports leader, Captain Hans von Tschammer Osten. “He is Germany’s sole Jewish […]