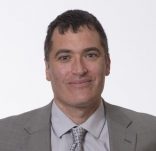 In April 1988, as the first intifada was in full swing, I was a 19-year-old student at Columbia University.

A student group at that time took to the campus plaza to demonstrate solidarity with the Palestinian people and to distribute anti-Israel propaganda. To my surprise I saw a number of Jewish students join them and stand under the Palestinian flag as they helped to staff their table.

They did not bring an Israeli flag with them, in the name of coexistence; rather they “stood with Palestine.” Maybe I had a sheltered childhood but I was shocked to see that and was driven to start my own one-man pro-Israel demonstration and to write an op-ed in the Jewish student paper of the time, Perspectives. In the op-ed I tried to analyze the position and impact of what I termed a Jewish Friend of Palestine (JFP). Now I admit that at the age of 19 I may have been a bit of a hothead. But even today, when we hear the strong reaction against the recent electoral success of Benjamin Netanyahu by Jewish voices on the left like the journalist Peter Beinart and J Street founder Jeremy Ben-Ami, and the efforts of J Street to influence U.S. policy towards Israel against its sitting government, I find that my youthful words still resonate.

I wrote at the time: “So what is it that has led these Jewish students to become JFPs? Perhaps it is greater insight into the issue? Such a claim is foolhardy at best. Maybe it is a stiffer moral fiber? That is unsurpassed conceit.”

Hmm, a sense of moral superiority and a monopoly on truth? Still applies in 2015? Check.

I also wrote: “While rationalizing any Palestinian extremism or fanaticism the JFP completely rejects opposing Jewish views.  From his smugness the JFP tries to understand the Palestinian opinions and condemns those of his brethren that happen to interpret reality in a different way. In the name of open mindedness the JFP closes his mind to his fellow Jews.”

Only sees one side, and delegitimizes other viewpoints. Check.

I wrote: “Unable to prevail in the forum of ideas within the Jewish community, yet still fully convinced of his opinions, the JFP rejects the forum and tries to enlist outside help.”

The left in Israel lost the election last month and can now serve in the role of an honorable and loyal opposition. However, this is not good enough for J Street. I guess the beauty of being an American is never having to admit defeat. So they have ramped up their efforts to push the U.S. to impose a “solution” to the Israeli-Palestinian conflict from outside, against the demonstrated will of the Israeli people, i.e. their fellow Jews who actually live with the consequences. Not only are they demonstrating their own hubris in assuming they know better, but they show disrespect for the democratic process of their own brethren.

Looking back, it seems that the JFPs from 27 years ago are all grown up but still think the same way. This time, however, they have more powerful tools at their disposal, with a real chance of influencing events in what is still a relatively small and vulnerable democracy.

As we celebrate Pesach, maybe we need to update the story of the Four Sons. The Wise Son asks: “How are we going to resolve the conflict with the Palestinians and what is the plan for our future?”  The Wicked Son son asks: “Why aren’t you reaching a peace deal yet?”

Is it wrong to question the Israeli government’s policies? Of course not. But there is a difference between questioning it from within and questioning those policies while sitting in New York or Washington, D.C. Let’s hope that this Passover all our people, regardless of their political views, refocus themselves on the “we” and not view Israel as a “you.”

Edieal Pinker is a professor of operations research at the Yale University School of Management and co-creator of the Jewish GDP Project.

Edieal Pinker
is the BearingPoint Professor of Operations Research at the Yale School of Management where he also serves as Chief Academic Officer and Deputy Dean.
The views and opinions expressed in this article are those of the author and do not necessarily reflect the views of NYJW or its parent company, 70 Faces Media.