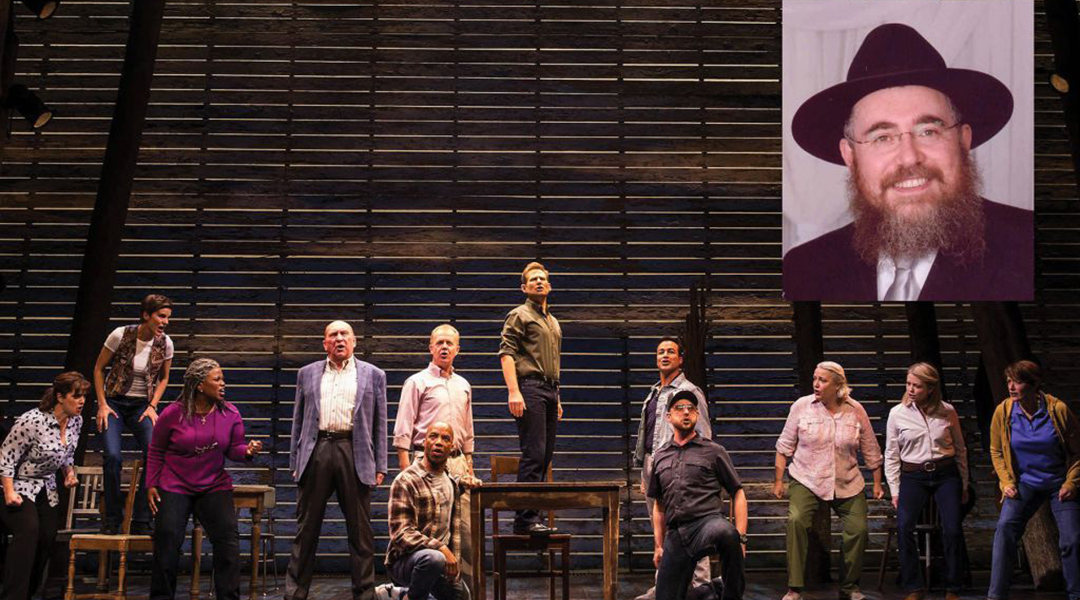 A scene from “Come From Away,” with Geno Carr (kneeling with cap) as Chabad Rabbi Leivi Sudak, small photo. (Matthew Murphy)
Advertisement

It won’t surprise anyone to learn that the kind rabbi in the new Broadway musical “Come From Away” is based on an actual Chabad spiritual leader.

Some of the most beautiful scenes in the musical — which opened in previews on Broadway last week — feature a rabbi ministering to strangers he meets when he, along with about 7,000 others on 38 planes, is diverted to Gander, Newfoundland, after the Twin Towers were hit on Sept. 11, 2001. The play, by Canadian playwrights Irene Sankoff and David Hein, is composed of dozens of stories of kind gestures done by and for the “come from aways,” as visitors to Newfoundland are called. The playwrights based the play on the hours of stories they heard when they traveled to Gander on the 10th anniversary of 9/11, including several about a Rabbi Sudak, though the three never connected.

In the play the rabbi (played by Geno Carr) wears a knitted kipa and modern clothing. But the actual rabbi the stories are based on is Rabbi Leivi Sudak, head of Chabad of Edgware, outside London, who would have been dressed in more traditional chasidic garb. On 9/11 the rabbi had taken a flight from London to New York to visit the grave of the Lubavitcher Rebbe, Rabbi Menachem Mendel Schneerson, just ahead of Rosh HaShanah, which would fall the following week. Instead of returning to London that night as planned, Rabbi Sudak found himself in Gander.

After seeing the play I wondered who this rabbi was. The playwrights knew only his name, which I recognized as a well-known Lubavitch one. Ten minutes after an email to Chabad’s press office, I knew how to reach Rabbi Sudak. A charming hour-long phone call followed.

Two of the stories the playwrights heard about Rabbi Sudak feature prominently in the play. In one scene a local Holocaust survivor who has never told anyone, not even his wife, that he is Jewish, hears that a rabbi is among the passengers and asks to meet him. The audience sees the two talk for a while, and then, as they part, the survivor hands back the yarmulke the rabbi has given him. But, instead of taking it back, the rabbi gestures warmly with his hand back toward the man. He conveys, in the tiniest of gestures, not just the gift of the yarmulke but that the Jewish community has never left him.

“That story is entirely true,” Rabbi Sudak told The Jewish Week in a lovely and warm English accent. “I did meet a survivor, Ed was his name. As a boy he had been tortured by the Nazis in Germany and adopted by a British family.” Rabbi Sudak said that Ed had told him the adoption was arranged by his birth parents before their deportation and extermination. Ed, along with his birth brother and his adopted parents, later moved to Newfoundland, but the couple warned the boys against telling anyone of their heritage, a promise he kept until he met Rabbi Sudak.

And the rabbi did indeed give him a yarmulke, along with a siddur and tallit, but that was later. Years after that, Ed’s son told the rabbi, his father was buried wearing his gifts, the yarmulke and tallit.

A second story in the play — and that week in Gander — shows a town official noticing that the rabbi isn’t eating. “But what can we do for you so that you’ll be able to eat while you’re here?” the rabbi said he was asked. On stage, and in real life, the rabbi is given access to a staff room at the school where they were housed that had a stove and cooktop he makes kosher — he buys new utensils and kosher ingredients, turning the staff room not only into the kosher mess but the meal room for vegetarians and people observing Halal rules.

Rabbi Sudak added to the tale: Since their stay included a Shabbat, the rabbi went around inviting guests and gathered up a few dozen people, including a Tibetan monk who was a descendant of a generations-old Jerusalem family. The monk had two requests, said Rabbi Sudak: “That he be able to make his own Kiddush and that he help with the food preparation. So there he was for two hours on erev Shabbat standing at a counter, one leg crossed over the other, peeling potatoes for our Shabbat meal. Gander even scared up Kiddush wine, Rabbi Sudak said. “Welch’s grape juice isn’t kosher in Canada, but we did find a bottle of Manischewitz.”

Even figuring out how to leave Gander brought out the best in the locals. Rabbi Sudak said his rescheduled flight back to London turned out to be on Saturday, and having to miss it put him at risk for still being in Gander on Rosh HaShanah a few days later. But again his hosts came to the rescue, driving the rabbi and two other observant passengers 500 miles to a flight. “And thanks to them I walked into my in-laws’ home in Brooklyn seven minutes before candlelighting on erev Rosh HaShanah.”

Rabbi Sudak is disappointed the playwrights didn’t reach out, but he did have a chance to publicly thank representatives of the Gander community. Several years ago Eithne Smith, who was the coordinator at the school where Rabbi Sudak was housed, was the guest of honor at a dinner held by Chabad of Edgware.

And while the “come from aways” lacked for little during their unexpected stay 16 years ago, they might find Newfoundland even more welcoming today— the first Chabad house in the province opened just days before the curtain lifted on Broadway for “Come From Away.”