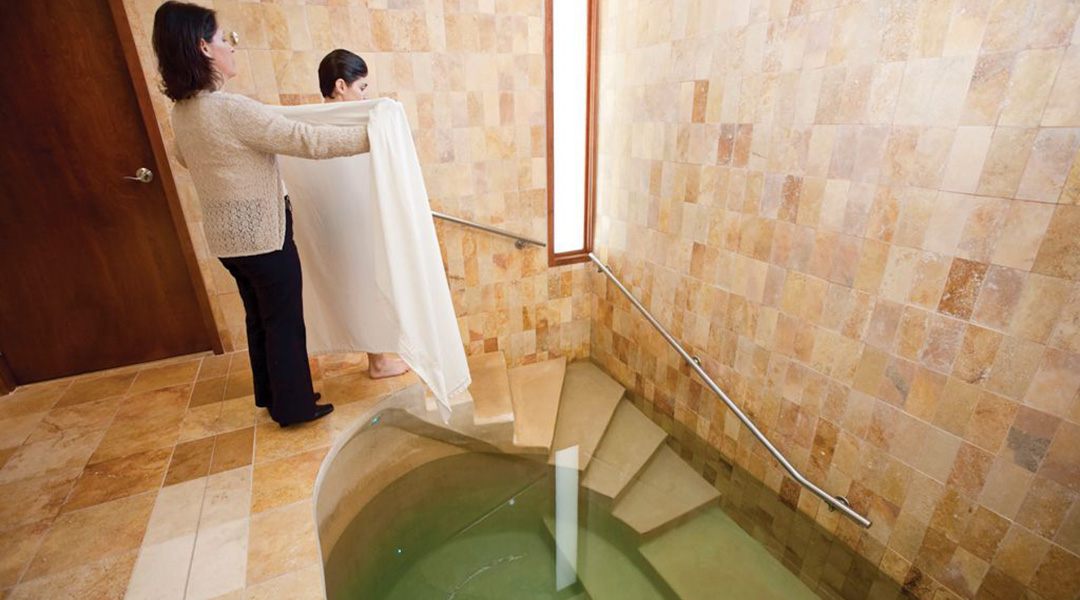 Testing the waters: A proposal for marriage couples and bar-bat mitzvah teens to use the mikveh. (Mayyim Hayyim blog)
Advertisement

Much has changed since our greatest generation was liberated from Egypt, but the challenges and opportunities that come with being an emancipated mixed multitude remain ours to address.

Ours is an age where the nature of Jewish identity and boundaries of communal definition are becoming more, not less, complicated. The numbers speak for themselves — some 70-plus percent of non-Orthodox marrying Jews being married to non-Jews. The age-old definition of defining Jewish identity by way of the mother was upended decades ago by the decision of the Reform movement to accept patrilineal descent. Whatever the conventions of Jewish definition may once have been, any study of Jewish demography makes clear that Jewish identity is shifting from an objective top-down religious or inherited definition to a subjective bottom-up matter of cultural, ethnic or other identification.

And in this new world of shifting terrain the one constant that remains is love. Love is a powerful thing, and time and again, young people find themselves, as the song from “Fiddler on the Roof” goes, wanting to build a home with a person not from the home they love. As a rabbi, this conversation is not a matter of theory, but of deep pastoral consequence. More than the statistics and sociology are the real-life stories that walk into my office all the time. What to do when a child of my congregation wants to marry a non-Jew or a patrilineal Jew? Am I to tell a woman descended from a former Soviet Union family that her Jewish journey is less authentic than another’s? When a child born to a non-Jewish mother seeks to enter my congregational school, wishing to celebrate her bat mitzvah, would I dare derail her emerging Jewish identity by suggesting that she isn’t really Jewish?

As a rabbi I have a commitment to uphold Jewish law and, as such, not officiate at interfaith weddings. As a rabbi, I also have an obligation to meet people where they are, and serve the Jewish future by helping build Jewish identity. So what exactly is a rabbi to do?

It is a question that I have been wrestling with for some years and that has becoming increasingly pressing in the Conservative movement and world Jewry as a whole. Given that not doing “anything” strikes me as lacking in a certain courage, I offer a proposal for consideration, for synagogue communities like my own, for the Conservative movement and perhaps other arms of Jewish life to consider.

By my read of the sources, from the Talmudic period onward, there is an established position permitting conversion to Judaism by way of mikveh immersion for a woman, and for a man, circumcision and immersion in a mikveh, coupled with a course of study.

Mikveh immersion is the Jewish act ritualizing a sacred transformation from one state of being to another. For the conversion of newborns or minors the course of study is waived, the act of being called up as a bar or bat mitzvah signaling a willed acceptance of an adolescent’s Jewish identity. The duration and content of the course of study is not specified in rabbinic sources, merely to teach the would-be Jew some of the strict and lenient commandments along with the obligations and misfortunes that can accompany being a Jew. Furthermore, on the question of the degree to which that would-be convert must be observant of the totality of Jewish law, there exist multiple opinions amongst respected authorities ranging from comprehensive observance to a sincere assent to the ideal of living an observant Jewish life.

It is because I am eyes wide open to the demography of American Jewry, it is because my read of the tradition is what it is and, most of all, because everything I do as a rabbi is done on behalf of the Jewish future, that I believe that the same body of Jewish law that mandates that I only officiate at weddings of one Jew to another may also be leveraged towards a maximally embracing approach as to who is or isn’t a Jew according to Jewish law.

The needs of the hour call on us to invoke the rabbinic principle of Kocha Deheteriah Adif — “The power of rendering a lenient ruling is preferable.” In our world where there are no guarantees regarding who our children will fall in love with, it is incumbent upon us to lower, not raise, the barriers to entry to being a Jew. If a non-Jew desires to build a Jewish home with a Jewish partner, a rabbi’s job is to nurture that desire, draw both partners close and make the onramp to Jewish life as inviting and doable as possible.

The length of the process should be up to the discretion of the sponsoring rabbi, not based on some magic number of classes.

As for the argument that only by being fully observant may one convert, we would do well to acknowledge that this is a self-validating criterion imposed by those who would limit the definition of what it means to be a Jew only to those who are fully observant — a definition that devalues the Jewish authenticity of the entire non-Orthodox world.

Jewish identity can be measured by observance, but it can also be measured by way of culture, ancestry, nationality, communal affiliation, philanthropy and otherwise. Like-minded communities must invest in outreach, education and programming towards creating as many pathways to Jewish life and living as possible, all with the aim to bring the maximum number of people into the definition of a Jew as defined by Jewish law. The Conservative movement should be the movement of conversion; that should be our mission. There is a need to be met and a market share to be had were we to have the courage and wherewithal to do so.

As to the question of the weddings of patrilineal Jews, Jews of uncertain descent and Jews of any other shades of Jewish identity, I would suggest the possibility that mikveh immersion become a requirement for rabbinic officiation. As it stands now, I require brides and grooms to get genetic testing, see a couples’ counselor and be a member or child of a member of my synagogue. Under this proposal, another requirement would be added: Regardless of whether one can trace their lineage back to Moses, every bride and groom immerses in the mikveh prior to the chuppah.

I did so before I got married. It was an incredibly transformative ritual that enabled me to reflect on my past and prepare for the exciting chapter to come. Such a requirement or stringency (which is really a leniency) would serve the purpose of leveling the playing field of Jewish identity — much in the same way, incidentally, that Israel should have done when hundreds of thousands of Jews of uncertain Jewish descent emigrated from the former Soviet Union. No vetting, no making someone feel “less than”— rather, the same rule applied to all. An affirmation to create a Jewish home and raise Jewish children, mikveh immersion — everyone equal in the eyes of Jewish law.

And so too, with our children. Due to the legal status of a minor in Jewish law, it is easier to address matters of Jewish identity prior to a child reaching maturity than after. What if we were to explore the possibility that every child who wants to celebrate their bar or bat mitzvah, matrilineal or patrilineal — my kid, or anyone else’s — takes a dip in the mikveh? For those children whose identity is not in question — mikveh immersion will serve to announce that theirs is a Jewish identity derived not merely by way of an accident of birth, but as a willed choice to be a stakeholder in the Jewish destiny. For those whose Jewish past calls on them to affirm their commitment to the Jewish future — mikveh immersion further serves to dot the “I’s” and cross the “T’s” of their identity for the remainder of their lives.

It is a policy, which, if adopted by world Jewry would, over time, obviate the question of who is and who isn’t a Jew by the time these b’nai mitzvah kids are ready to get married.

There is much more to say, thousands of details to work out and more questions than answers, but we have to begin somewhere. In broad brushstrokes, what I am suggesting is: A conversion process whose length is left to the discretion of the sponsoring rabbi; mikveh immersion becoming part of the pre-wedding preparation for all couples; and mikveh immersion becoming part of the b’nai mitzvah process.

Such a policy would not meet the needs of every interfaith relationship. But it would indicate we are doing everything we can — in spirit and in deed — to meet people where they are while remaining within the bounds of Jewish law.

I believe that if a large enough swath of the Jewish world, in the diaspora and in Israel, embraced such an inclusive approach to Jewish identity, it may in the long term bear the potential to shift the politics on the age-old question of “Who is a Jew?” and redound to the benefit of the Jewish people as a whole.

At the seder table, we just declared, “All who are hungry come find a seat and be satisfied.” This year, let our focus turn to include those possessed with a spiritual hunger to sit at the table of our people. Passover reminds us that every child has a seat reserved for them. Let us fulfill our obligation to bring as many as we can into the narrative and covenant of our people, and in so doing serve the Jewish past by building a very bright and inclusive Jewish future.

Rabbi Elliot Cosgrove
is the rabbi of Park Avenue Synagogue in Manhattan.
The views and opinions expressed in this article are those of the author and do not necessarily reflect the views of NYJW or its parent company, 70 Faces Media.