As Opioid Crisis Grows In Orthodox Circles, Those Closest Speak Out 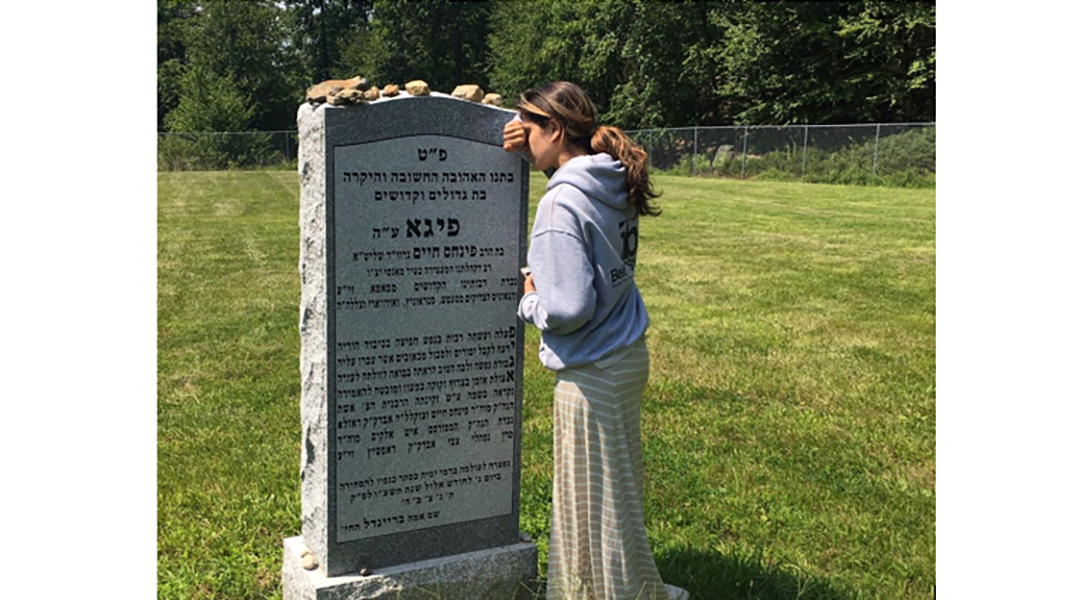 Chana Gibber at the grave of her friend Faigy Grunwald. (Courtesy of Chana Gibber)
Advertisement

Five months ago, Chana Gibber, a 20-year-old recovering opioid addict, woke up in a hospital bed attached to a ventilator.

She had been hospitalized the night before after overdosing on heroin.

“I was homeless and panhandling [at the time],” recalled the Midwood native, speaking to The Jewish Week in an exclusive interview. She grew up in the Brooklyn ultra-Orthodox enclave and attended a high school for troubled girls; she has since broken with the insular community. “I overdosed and flatlined for like 13 seconds. … They Narcanned [administered Naloxone, an opioid antidote] me like six times.”

“Addiction wants us dead,” said Gibber. “It wants to torture our lives.”

Despite her unstable condition, she texted a friend from her hospital bed, asking for more heroin. Her friend smuggled the drugs past security and the nurse station and up to her room. Propped up on the sanitized pillows, she injected herself again.

“Addiction wants us dead,” said Gibber, today in recovery. “It wants to torture our lives. … The battle of fighting against it is so crazy.”

Gibber — today over 100 days clean, newly employed and living in Los Angeles — lost five friends to overdose in the past year. Most recently was a close high school friend, Malky Klein, who, like Gibber, had left her chasidic community. She died in Brooklyn in June. She was 20.

The national opioid crisis — a combination of doctor over-prescription and patient misuse that has contributed to an epidemic of addiction and overdose — has not spared Orthodox communities, despite strict guidelines that attempt to shelter youth from outside influences. The crisis seems to be hitting home particularly hard for those who leave the ultra-Orthodox Jewish community, self-identified as “off the derech,” or path. Since the beginning of June, 13 people have died of overdoses among Orthodox and formerly Orthodox Jews under the age of 35; since January of this year, that number is over 100, experts say. While 2016 saw an alarming spike in the number of ultra-Orthodox deaths by overdose — 65 in the past Jewish calendar year, according to Zvi Gluck, director of Orthodox social service organization Amudim — this year’s death toll quickly surpassed those numbers.

Since the beginning of June, 13 people have died of overdoses among Orthodox and formerly Orthodox Jews under the age of 35 — since January of this year, that number is over 100, experts say.

While prominent members of the ultra-Orthodox community have started to weigh in on potential causes and solutions, those even closer to the tragedies — friends, family members, and individuals like Gibber who have themselves narrowly escaped tragic deaths — are starting to talk.

“People are dying — this is not about religion anymore,” said Mushky Z., a 23-year-old college student living in Crown Heights (She requested her last name be kept private). She was close friends with many of the young adults who recently succumbed to opioid addiction. Though she grew up in the Chabad chasidic community, today she no longer considers herself part of it.

“They rejected me,” she said, recalling that she was “kicked out” of her all-girls elementary school because the school staff did not know how to deal with her complicated problems. Though Mushky did not use drugs, she struggled with alcohol addiction in high school and a complicated family life. “When someone is acting out and going against the rules, people [in the religious community] step away — they are scared, they don’t want to deal with it.” The problem is that these “bad behaviors” — partying, drug use, alcohol use — are a “desperate cry for help.”

“By pushing these people away, the suffering only gets worse,” she said. “Open your eyes. Realize you can help someone.”

Although she has seen many friends struggle — and succumb — to addiction over the years, something has changed in recent months, she said.

“We’re not hiding it anymore,” said Mushky referring to an increasingly active — and angry — group of young people who are leaving (or have left) the Orthodox community — either by choice or systematic exclusion. “We used to hide everything we did — not keeping religious rules, partying, doing drugs — we hid that from the community, because we were ashamed, or because of negative feedback. Now, we’re showing our faces. We’re done hiding who we are.”

Perry D., a 22-year-old formerly Orthodox young woman (who requested her full name not be used for privacy reasons), recently posted on her Facebook wall: “The religious community only started caring once we started dying.” Her post received a flurry of comments and responses, most affirming the sentiment. (The comment was reprinted here with permission.)

“We used to hide everything we did — not keeping religious rules, partying, doing drugs — we hid that from the community, because we were ashamed, or because of negative feedback. Now, we’re showing our faces.”

Demo M., 24, a friend of Meyer Green — an ex-Orthodox man in his early 20s who died in early June — recalled the experience of being cast out of an upstate Monsey religious community before the struggle with drug addiction began.

“Many of us were cast out — [we] didn’t have family support, or community support,” Demo said. “Maybe it’s the fact that we’re addicts. There are a lot of factors [that contribute to addiction]. One of them is losing community.”

Integrating more sports and creative outlets — like art and drama — into Orthodox schools could steer frustrated youth away from drugs, Demo suggested.

“When someone disconnects from a community, [the person’s] identity is lost,” said Schechter. Though the data is not “clear enough” at this point to draw conclusions, “falling out of hope” can lead to depression, overdose, and suicide.

“When someone disconnects from a community, [his/her] identity is lost.”

Yaacov Behrman, a program director in the Chabad-Lubavitch community in Crown Heights, directs the drug-prevention group Operation Survival. He said the Orthodox community is not unique in its struggle against opioids.

“We’re not angels,” he said. “We’re affected by the outside world.” Religious communities, no matter how insular, are not immune to this national epidemic, he said.

“It’s hard for any parent to imagine that their kid is capable of overdosing,” Behrman said.

A challenge that is unique to the Orthodox community, he said, is an absence of awareness, exposure and education about these issues. The “mindset of protection” that pervades many Orthodox homes and schools is actually doing a disservice to its youth, he added.

“Parents don’t want their kids to be exposed to these ugly realities, but it is worth the exposure,” he said. Under Behrman’s leadership, Operation Survival has become the first Jewish program in New York State to register as an Opioid Overdose Prevention Training program; the program aims to provide the Jewish community of Crown Heights not only with prevention education, but also overdose response training.

“Awareness is important. It’s hard for parents to have a conversation with their kids about drugs. It’s harder not to,” he said.

Zvi Gluck, founder and director of Amudim, an organization that provides support and mental health services to the Orthodox community, pointed to a 2016 survey by the National Institute on Drug Abuse that found that drug use among high school students is on the decline. He attributes the shift to early education and intervention programs. Orthodox schools are slowly beginning to follow suit, he said.

“I am quite pleased overall with the way our Yeshiva systems are making subtle changes in different areas such as training and education,” Gluck told The Jewish Week. “But sadly it is still lacking tremendously in the fields of addiction and abuse,” he added.

“Alcohol is still a big gateway. Rarely does someone start taking opiates before they started experimenting with alcohol or marijuana.”

“Drug use is a response to a lot of pain,” she said. “If you leave religion, you are branded as an outcast and a rebel … you become a ‘bad person.’ [You] ask yourself ‘Why shouldn’t I do drugs if people already assume there’s something wrong with me?’”

“Drug use is a response to a lot of pain,” she said. “If you leave religion, you are branded as an outcast and a rebel … you become a ‘bad person.’ [You] ask yourself ‘Why shouldn’t I do drugs if people already assume there’s something wrong with me?’”

The thought process is cyclical and self-fulfilling, she said. It is hard to fight off the despair.

Despite losing several close friends to overdose — and despite her own volatile journey, from relapse to recovery to relapse — she plans to fight for life.

“Hope is everything,” she said.

Hannah Dreyfus is a staff writer; Chaim Levin is an editorial intern.

Editor’s Note: Mushky’s last name originally appeared in the article, but was later removed at her request.