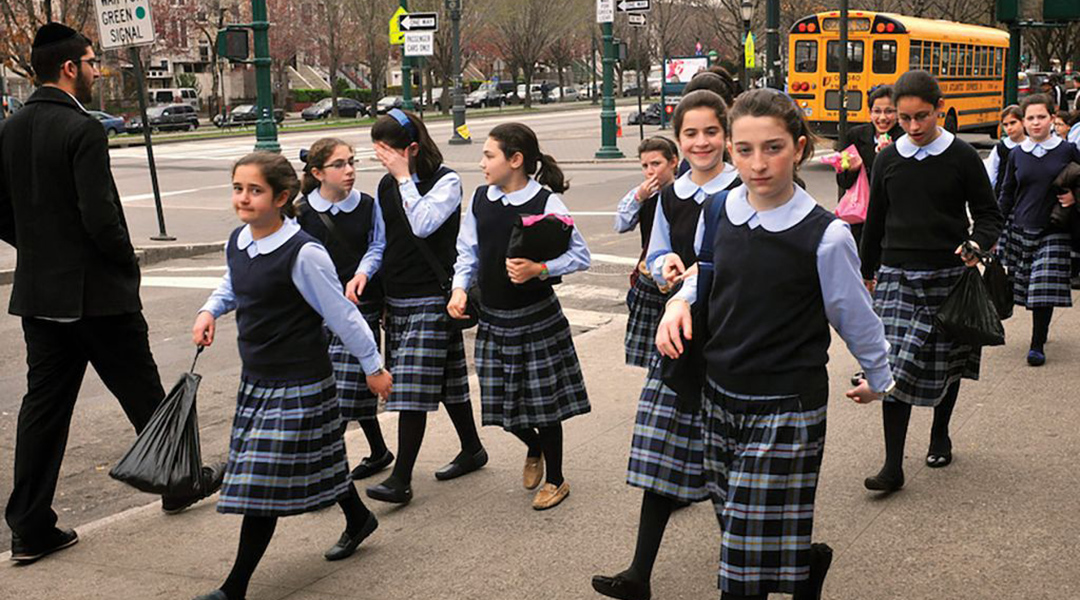 Ayala Tiefenbrunn, a 21-year-old design student at FIT and an Orthodox young-married, took the mic in front of 75 people a few months ago. She took a deep breath and launched into a personal essay about her tortured relationship with birth control.

While acute communal and social pressure dictated that she and her husband start “trying,” her young age and professional aspirations kept her dutifully on the pill. But, she said, the choice isn’t easy. “Every time I don’t see a friend for a few months and she’s pregnant, it hurts a little — I so want to be there.”

Married at 19, Tiefenbrunn addressed an audience of young, predominantly Orthodox women; she wore a silver and blue head wrap, horn-rimmed glasses, and a layered top. Later, she confessed, “I constantly feel guilty because I’m on birth control.”

The open mic night, which took place over the summer at the JCC Manhattan, was organized by Monologues from the Makom, a grassroots initiative to open up conversations about female sexuality in religious circles where the subject is still largely taboo. The project is a spinoff of Eve Ensler’s 1996 Off-Broadway sensation “The Vagina Monologues”; Makom, which literally means “place” in Hebrew, is the Talmudic euphemism for vagina.

Launched last year by 23-year-old psychology research assistant Sara Rozner, the project aimed to fill a void of “sex positive spaces” for Orthodox women. Now, with another event in the works and plans to publish a book of personal essays on the subject (submissions close Dec. 1), the initiative is gaining traction, despite its controversial premise.

The burgeoning conversation about modesty culture, victim blaming and sexual harassment struck a nerve last month in the Orthodox community after Mayim Bialik, the actor and vocal Orthodox feminist, wrote an op-ed in The New York Times arguing that modest dress protected her from Harvey Weinstein-like sexual advances. (Bialik later apologized for the article.) Now, young observant women have started speaking out about the dearth of sex education in Orthodox high schools, and the concerning, sometimes harmful messages about modesty and sexuality they received.

“Very often, when Jewish women talk about sexuality in public, we’re shamed for it,” said Tiefenbrunn, who struggled with the decision to speak publicly about her relationship with birth control. “It’s not considered ‘tzinus’ to speak about,” she said, using the umbrella term for modesty employed to enforce strict codes of dress, speech and action, particularly among young women. “People ask, ‘Why are you embarrassing yourself in public by speaking about these things?’ They’re wrong. [Sexuality] needs to be talked about. Young women need to know they’re not going through these experiences alone.”

“Very often, when Jewish women talk about sexuality in public, we’re shamed for it.”

Rozner, who grew up in an insular Orthodox community in upstate Monsey, recalled one of the only classes in her all-girls high school that addressed sexuality. The teacher, a male rabbi, drew a stick figure of a boy on the chalkboard. He then proceeded to lecture the room full of teenage women on the obscenities that preoccupy the male mind.

“‘Boys only want one thing,’” Rozner recalled him saying ominously. Nervous laughter filled the room as she felt her heart “sink.”

“If boys only want one thing, that must mean girls don’t want that thing,” she said. When, in early adulthood, she became conscious of her own sexual identity and desires, she thought “I literally must be a freak.”

“Sexuality was framed as a thing boys experience. It was not something we, as religious young women, should feel, think about or want.”

“Sexuality was framed as a thing boys experience,” she said. “It was not something we, as religious young women, should feel, think about or want.”

Orthodox high schools are beginning to address the problem. Bracha Rutner, the assistant principal of the Queens-based Central High School for Girls, described a sex education program that is one of the first to deal with these sensitive issues: “Torah Value Intimacy Education for Women,” or T-VIEW. The program, in its fourth year, tackles complex subject matter — including body image, eating disorders, homosexuality, pornography, STDs, ‘sexting,’ harassment and consent — in an “honest, straightforward way,” said Rutner. (The curriculum for the course was created by the Israel-based educator Yocheved Debow and is currently being piloted at Central and three other prominent Modern Orthodox high schools in the Northeast: Ma’ayanot Yeshiva High School for Girls in Teaneck, N.J., Rae Kushner Yeshiva High School in Livingston, N.J., and Kohelet Yeshiva High School in Philadelphia.)

“Most of our students are very conservative,” said Rutner, who is also a Yoetzet Halacha, a female expert in the laws of family purity. Still, those who are “experimenting” can feel isolated and ashamed. “This course opens the door to create a safe space for students.”

When Bialik’s controversial op-ed went viral, Rutner brought it to class. “Does modesty ‘save’ you? Does it not?” Students argued both sides.

Rutner stressed that all of the subjects are taught “through the lens of Torah and halacha.” Other educators disagree with this approach, believing that religion need not enter a frank conversation about sex.

Other educators disagree with this approach, believing that religion need not enter a frank conversation about sex.

“We as community need to be very careful when we extrapolate Jewish values [about sexuality] from the texts that we have,” said Ora Weinbach, a religious studies and sex education teacher at Abraham Joshua Heschel School in Manhattan, speaking on the topic at the most recent Jewish Orthodox Feminist Alliance (JOFA) conference. Like other subjects in a dual-curriculum setting, “sexuality needs to be taught from a strictly secular perspective,” providing students with all the information free of religious judgement and “bias,” she said. She gave the example of educating students about all different forms of contraception, including those prohibited by Jewish law. Separate spaces can and should be provided for students to learn about the Jewish perspective.

“These conversations are happening behind the walls of social media,” said Rabbi Eliezer Rubin, head of Kushner High School, who began piloting an intimacy education program last year. “Better that we as educators bring them into the light in a healthy, faculty-facilitated and honest way.”

In the immediate aftermath of the Harvey Weinstein scandal, Rachel Caplan, a 26-year-old actor who grew up Modern Orthodox, wrote a widely shared #MeToo Facebook post that expressed frustration, anger and sadness towards the sexual education she received at her all-girls high school in New Jersey.

“I was taught that men cannot control themselves, thus we as women must make life easier for them by dressing a certain way, not singing in front of them, not doing anything which might tempt them,” she wrote.

The message, and the belief that fewer “curves” might protect her from unwanted advances, led to a tortured and dysfunctional relationship with eating. “It felt safer to have fewer curves, to feel like when I walked, nothing jiggled, nobody could mistake me for trying to bring attention to my body.”

Her attempts to “de-sexualize” her body led to a tremendous sense of guilt when she was sexually harassed, despite all her efforts.

“Of course the first time a man took liberties with my body, I blamed myself. … After all, he’s just a man with uncontrollable instincts. It was my job as the level-headed woman to keep him at bay, wasn’t it?”

Rachel Hercman, a licensed clinical social worker and sex therapist who works with the Orthodox community, said the responsibility to educate children and young adults about sex does not only lie upon institutions alone.

“Of course the first time a man took liberties with my body, I blamed myself.”

“Parents play an incredibly important role by teaching children how to be vulnerable, express affection and articulate their needs and desires,” she said. Developing a fluency and comfort with addressing matters of sexuality in the home is essential, she said, though she frequently sees the tendency to “blame educators.”

Nonetheless, Hercman, who has lectured widely on sexuality in right-wing environments, said that she is seeing a new “openness” to address these issues.

“There is energy being put towards topics that carry stigma,” she said, citing infertility and mental health as further examples. “There is a growing demand for open, judgement-free spaces.”

And, unlike other events about sexuality in the Orthodox community that tend to specify “married women only,” Lakritz, who is unmarried, was adamant that the group remain open to all.

“Why are we so afraid to talk about sexuality?” said Lakritz, who reported that the group has been steadily growing — 12 people at the first meeting, 20 people at the second. “We absolutely should have this knowledge before it is ‘necessary,’” she said, referring to the strict prohibition against pre-marital sex dictated by Orthodox law. “When it is necessary, young women won’t feel thrown off the deep end.”

“When it is necessary, young women won’t feel thrown off the deep end.”

Lakritz, who grew up in Milwaukee, attended a right-wing all-girls school growing up, and observed the laws of shomer negiah, the prohibition against male/female touch before marriage. While she found these laws to be positive — “I was able to process sexuality intellectually first” — she said certain messages she received were damaging.

Girls were told: “You are the gatekeeper of men’s sexuality. If you dress immodestly, that is creating a stumbling block for men,” she said.

While a freshman at Barnard College, she was exposed for the first time to the concept that sexual abuse and harassment “is not a woman’s fault.”

“That was a powerful moment for me,” she said. “And also a painful moment.”

“It is still a small slice of the community that is starting to have these conversations,” said Marcus, who helps orchestrate an Orthodox bride and groom teacher training workshop that encourages educators to speak frankly and openly with soon-to-be-weds about sex (a new training session will be held in the Bronx in December). She also co-hosts the “Joy of Text,” a podcast that addresses the intersection between Judaism and sexuality.

Though Marcus harbors “some level of skepticism” about this new openness towards sexuality taking hold in the broader Orthodox community, she thinks grassroots initiatives, like the Monologues project, will influence positive change either way.

“Even if it starts as a crazy idea on the left, it will slowly seep into the right,” she said.
For Tiefenbrunn, who walked away from the mic feeling empowered and hopeful, being part of this grassroots push is a must.

“I feel compelled to shed light on the things people don’t talk about,” she said. “For my sake. And for another young woman’s sake.”