Welcoming The Stranger Is A Core Principle Of Judaism 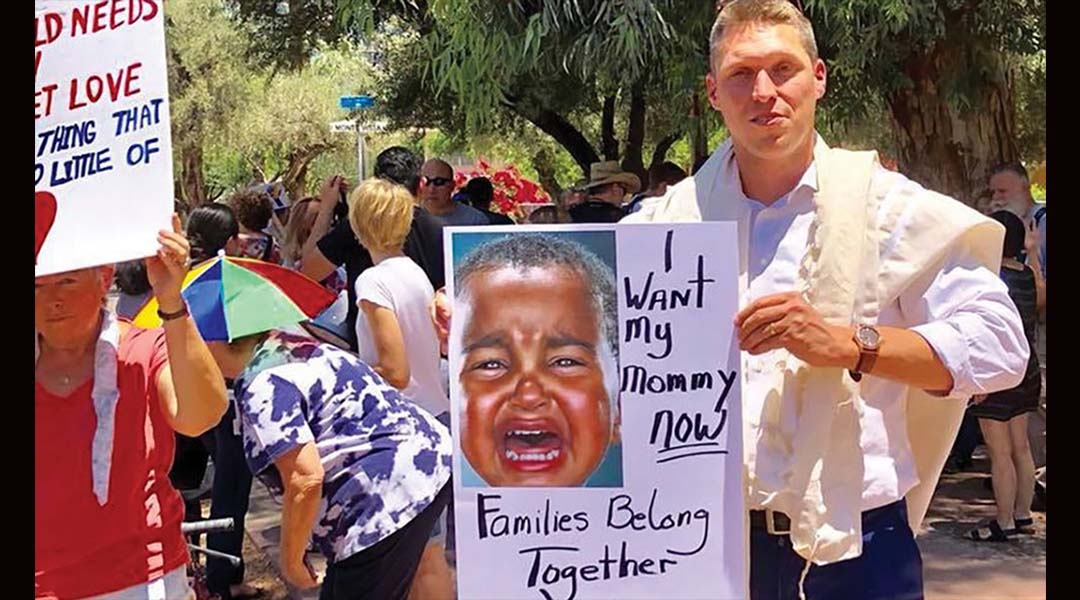 Rabbi Shmuly Yanklowitz, a one-time New Yorker now living in Phoenix, joins members of Arizona Jews for Justice at a rally earlier this month outside an ICE facility near the Arizona-Mexico border. The rabbi is founding president of both the Arizona group and Uri L’Tzedek, an Orthodox group devoted to social justice. (Courtesy of Uri L’Tzedek)
Advertisement

In an age of terrorism and international turmoil, secure borders and orderly, lawful policies for dealing with immigrants and refugees are critical to America’s security. But it is also critical that we remain true to the ideals of a nation that has served as a refuge for those fleeing wars, oppression and intractable poverty — ideals that brought so many of our Jewish ancestors to America’s shores and to safe, prosperous lives.

The humane treatment of even those who come illegally should be a given in a democracy that touts its devotion to human rights. Tragically, today’s headlines suggest that the Trump administration — whether legitimately concerned about the impact of illegal immigration or exploiting traditional anti-foreigner biases for political gain — believes otherwise.

The harsh roundups of undocumented immigrants and the appalling policy of separating parents from children at the border as a “deterrent” to undocumented immigration bring shame to America and weaken the frayed fabric holding us together as a nation. Citing the Bible to justify that policy, as administration officials and spokespeople have done in recent days, is an affront to the values underlying the Jewish, Muslim and Christian religious traditions. Indeed, welcoming the stranger is a core principle of Judaism. The Torah instructs us 36 times to care for the stranger — far more than it commands us to observe the Sabbath or any other law.

For the Jewish community, a longtime advocate of serious immigration reform, the current crisis has three elements. The first is a matter of simple humanity; wrenching families apart and treating some foreigners who have built productive lives here without government sanction with summary deportation has elevated cruelty to the level of national policy. Illegal immigrants are breaking the law, but the searing images of children removed from their parents and warehoused in grim facilities point to a major and frightening moral lapse. (Read the full report here.)

“This policy undermines the values of our nation and jeopardizes the safety and well-being of thousands of people,” according to a letter sent last week by 26 Jewish organizations representing — with the late addition of the Orthodox Union — all four major Jewish streams. “As Jews, we understand the plight of being an immigrant fleeing violence and oppression. We believe that the United States is a nation of immigrants and how we treat the stranger reflects on the moral values and ideals of this nation.”

Secondly, America’s role as safe haven for those facing great danger and oppression is part of the Jewish community’s historical DNA. We remember with deep sadness how ever-more-restrictive barriers to legal immigration in the first half of the 20th century — fueled by the virus of angry nativism that has erupted again in the last few years — shut the door to countless immigrants and refugees, with dire consequences for many Jews seeking to escape the maw of Hitler’s Holocaust. As the Jewish experience in America so vividly demonstrates, diversity bred from immigration has been a source of economic strength and cultural richness for the nation.

Finally, many in our community are justifiably alarmed by the fast-growing use of raw xenophobia as a tactic in the political arena. Angry nativism is nothing new in American culture and politics; what is new is the growing influence of those ideas on government policy and the validation the current administration’s strident rhetoric has given to so many of the nation’s haters. That represents a threat to the soul of our society and to the security of every minority group, including our own.

So for the Jewish community, rational immigration and refugee policies that recognize the value of welcoming those seeking a safer and better life are a matter of community self-interest as well as fundamental morality. This isn’t to say that our borders should be porous or that illegal immigration should be encouraged. Far from it. But those fleeing horrific violence and others — including many families — simply seeking better lives and a thin slice of American prosperity must be treated with basic human decency.

As major Jewish groups have argued for decades, a more welcoming and orderly process for admitting immigrants and refugees legally is long overdue. The decades-long failure of Congress and both Democratic and Republican administrations to enact serious policy reform helped bring about today’s tragic situation.