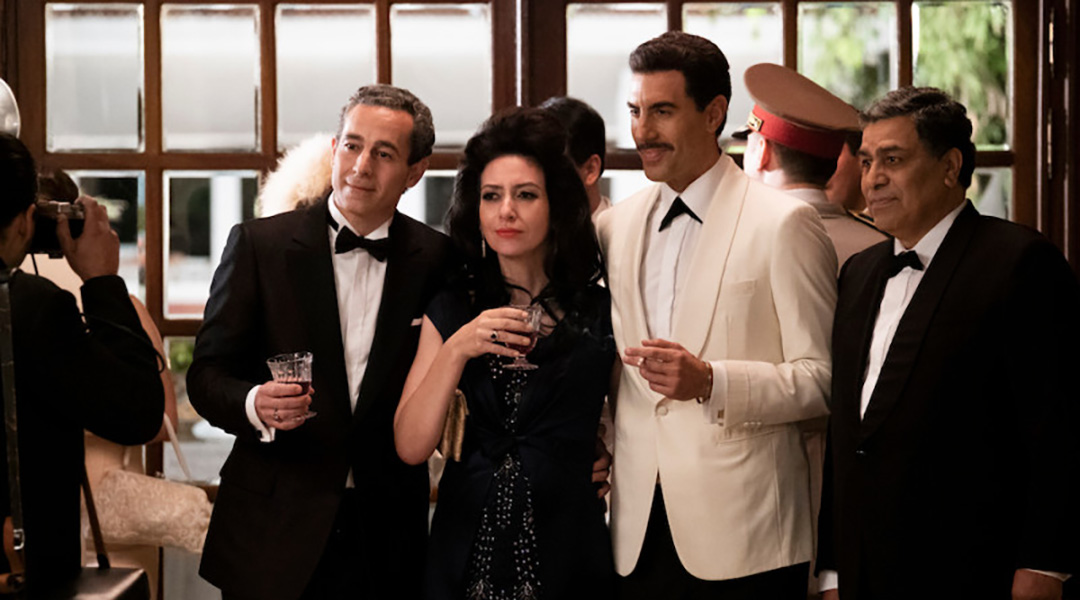 Casting an actor known for his comedy chops to play as serious a role as a Mossad spy undercover in Syria might seems to be a reckless choice. But in his first leading role in a drama, Sacha Baron Cohen proves the theory wrong with a stunning performance as Eli Cohen in the limited series “The Spy,” now on Netflix.

I remember discussing these characters with my friends, saying they each deserve a full feature film of their own. Some said nobody would want to see that.

Later, the stunning successes of “Borat” and “Bruno” as feature films took in about $380 million worldwide and launched the comedian into superstardom. In an interview with Conan O’Brien he said that during a wine-tasting scene for the HBO show he passed out after drinking 21 glasses of wine. Staffers were concerned he would break character when he woke up, but he didn’t.

The late night host told him: “You’d be a good spy. You never forget who you are.”

In an opening scene in “The Spy,” a rabbi finds a confused Cohen in a jail cell, struggling to remember his identity.

As one of the Mossad’s most successful (and famous) spies, Cohen operated under the fake identity of a rich businessman named Kamel Amin Thaabeth. The series shows how he, astonishingly, was able to infiltrate the highest levels of the Syrian government and military by throwing wild parties and using his charisma and money to gain their trust. He used his position to obtain crucial intelligence about military installations in the Golan Heights that was said to have been a key factor in Israel’s successes during during the 1967 war.

Cohen was eventually caught, tortured and hanged in a public square in Damascus in May, 1965.

Baron Cohen makes “The Spy” a must-see. He characterizes the unique blend of strength, stoicism and sensitivity alongside his charm. While most spies have to blend in, here he plays someone who is outwardly flamboyant.

One of the most tension-filled scenes is when he is in a bunker and a Syrian military official gives him the “gift” of firing from a distance and killing Israelis. He doesn’t want to blow his cover, nor does he want to kill his fellow Israelis.

The directors make a bold choice to have scenes edited in grey which appear almost as black and white footage. It pays off, adding a dramatic but serious effect.

In terms of casting, Noah Emmerich of “The Americans” does a fine job as Cohen’s handler, Dan Peleg, who is both confident in his spy’s ability but worried that his eagerness will get him killed. Alexander Siddig, who you might remember as Doran Martell from “Game of Thrones” uses sinister facial expressions to nail the role of Suidani. He’s the man who never trusts anyone and is in charge of sniffing out spies or traitors.

Written and directed by “Homeland” creator, Gideon Raff, and based on the book “The Spy Who Came From Israel” by Uri Dan and Yeshayahu Ben Porat, the series gets stronger with each of the six episodes. One more episode might have done well to show the psychological toll of being a spy. (One scene where he collapses by his fridge in mild hysteria comes out of nowhere and doesn’t do all that well to bring to life the extent of the toll.) Another, where Cohen purchases a television and yells at a security guard doesn’t seem authentic because we haven’t seen previous outbursts of anger. A fight scene could have been more believable and more screen time is needed for his wife Nadia, played by Hadar Ratzon Rotem, for a bit more of an emotional pull.

But Raff has made most of it scintillating, and it leaves audiences wanting to see the next episode, even if you know what eventually happens to the spy. There’s even an eerie moment where Cohen meets a child version of Osama Bin Laden and you wish he could kidnap him and prevent him from being radicalized.

Baron Cohen was once slated to play Freddy Mercury in “Bohemian Rhapsody.” It didn’t work out and Rami Malek did a great job in the role, but Baron Cohen provides an unforgettable performance here and it’s a huge upgrade over the 1987 made-for-TV film “The Impossible Spy.”

Personally, I think Baron Cohen would have been a great spy. After all he’s gone undercover and developed so many characters in his many roles.

Most recently, in his Emmy nominated Showtime series “Who is America?” he tricked numerous politicians into believing he was an Israeli Colonel named Eran Morad. In the show he exposes questionable views on gun violence, and shows the danger of racism and Islamophobia.

Baron Cohen’s someone who takes comedic and professional risks in his work to make people laugh. But he also makes people think and exposes issues swept under the carpet. Who knows what is yet to come for the talented Brit.

More on the man behind the series, Gideon Raff, here.