Holocaust Survivors Will Soon be Gone. Now it’s Up to Us to Speak Out Against Hate. 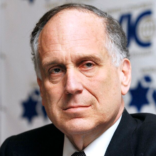 It is a fact well-documented and well worth repeating: Within 25 years, it is likely that no survivors of the Holocaust will be alive.

As a Jew, I am frightened by how the world looks in 2020. The rise of anti-Semitism we are experiencing today, both in the United States and elsewhere, feels eerily like 1933 Europe.

The Interior Ministry in Germany reported last year that anti-Semitic incidents in that country rose almost 20 percent between 2017 and 2018, reaching 1,799 politically motivated crimes with a presumed anti-Semitic motive in 2018, the most recent data available states. Yet Germany is failing to provide police protections to synagogues.

On Yom Kippur last year, a white supremacist would have killed far more than the two innocent victims he did had Roman Yossel Remis not bravely protected his fellow congregants in Halle. When I visited that German town mere weeks after the attack, I was shocked that a historic Jewish house of prayer, which had survived even the Nazis, was abandoned to its own fate, left to face the hate alone, unguarded and defenseless.

In the first half of 2019, there were nearly 800 anti-Semitic incidents in the United States alone — including the attack on a synagogue in Poway, Calif., that left one woman dead — and the year ended on a similarly distressing note. As Jews around the world celebrated Chanukah last month, a small group of worshippers in Monsey, N.Y., were attacked by a machete-wielding zealot while convening at a rabbi’s home for a holiday party. Earlier in the month, three innocent people were shot to death in a Jersey City kosher supermarket by the same two shooters who killed a police officer nearby.

This bloodshed comes in addition to the seemingly unending stream of verbal and physical assaults launched at Jews in Orthodox neighborhoods. And the year before saw the worst attack on Jews in the history of the country, when a gunman killed 11 people during Shabbat morning services at the Tree of Life synagogue in Pittsburgh.

The rate of increase of anti-Semitic crimes in the United States and abroad should frighten every citizen, everywhere, whether they live in a community with a large Jewish population or not. We all have a responsibility to sound the alarm in order to prevent further violence and vitriol because left unchecked, we know all too well the horrors that threaten. We must prevent history from repeating itself.

As International Holocaust Remembrance Day approaches, together we must remind ourselves and others why six million Jews were murdered by the Nazis: Because they were Jewish.

The survivors of the Holocaust who so courageously share their stories have taken it upon themselves to relive the horrors they experienced so no one else has to. But with the number of living survivors rapidly dwindling, it is more imperative than ever that every person of conscience does their part to educate others on what can come if hatred and evil are left to fester unchecked.

The atrocities of the Holocaust must not be forgotten, and the best way to ensure that is through organized, formal and ubiquitous Holocaust education.

I’m grateful to global leaders like German Chancellor Angela Merkel, who just last month, while visiting Auschwitz for the first time as the leader of her country, publicly declared her own personal commitment as well as Germany’s to increasing Holocaust education there. And there is still so much more to do.

We must encourage leaders around the world to stand up to a horrifying new wave of hatred. To curb the rise in anti-Semitism and bigotry, we need action, not words.

For the fourth year, the World Jewish Congress is leading the #WeRemember campaign, bringing people together on social media to ignite a conversation about the critical need for Holocaust education. The project is simple, yet extremely impactful, and anyone can take part.

From now until Jan. 27, when the campaign will culminate at the official commemoration of the 75th anniversary of the liberation of Auschwitz-Birkenau, take a photo of yourself — or in a group —  holding a sign that says “We Remember,” and then post it to your favorite social media platforms using the hashtag #WeRemember.

I implore you to join us in stating emphatically that together, “We Remember.”

When the world was silent, millions of innocent people were systematically murdered in cold blood. Let us join forces and raise our voices to ensure the atrocities of the Holocaust will never be repeated.

Ronald S. Lauder is president of the World Jewish Congress and chairman of the Auschwitz-Birkenau Memorial Foundation. He wrote this for JTA.

Ronald S. Lauder
is president of the World Jewish Congress and chairman of the Auschwitz-Birkenau Memorial Foundation.
The views and opinions expressed in this article are those of the author and do not necessarily reflect the views of NYJW or its parent company, 70 Faces Media.