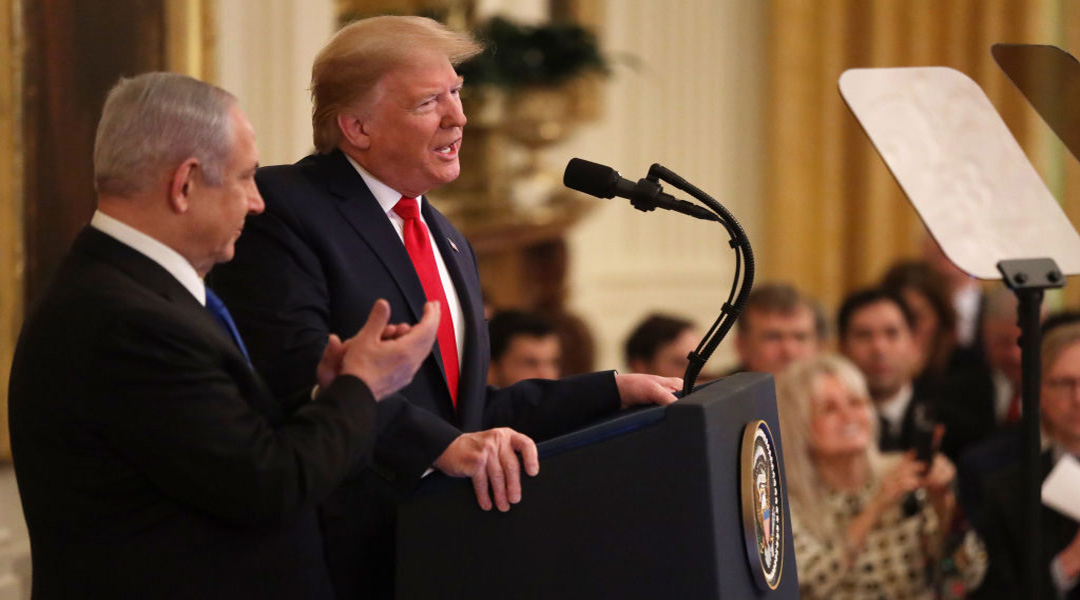 US President Donald Trump on Tuesday unveiled his long-awaited Israeli-Palestinian peace plan, saying it will enshrine Jerusalem as Israel’s “undivided” capital and enable Israeli sovereignty in parts of the West Bank, while also providing for an eventual Palestinian state with “eastern Jerusalem” as its capital.

He hailed the plan as marking “a big step towards peace” for Israel, and said “we have an obligation to humanity” to get the deal done.

Speaking at the White House alongside Prime Minister Benjamin Netanyahu, the US president said support for the plan by both Netanyahu and his election rival, Blue and White party leader Benny Gantz, showed “peace transcends politics in Israel.”

“This vision for peace is fundamentally different from past diplomacies,” Trump said. “Even the most well-intentioned plans were light on factual details and heavy on conceptual framework.” He added that his plan was 80-pages long, calling it “the most detailed proposal ever.”

“Today, Israel is taking a big step toward peace… Netanyahu informed me that he is willing to endorse the vision as a basis for direct negotiations.”

The US president said that the “peace vision” that Trump’s son-in-law and senior adviser Jared Kushner has been working on for nearly three years calls for a two-state solution, includes detailed maps of territory.

He said the future Palestinian state will be contiguous, but would not be able to threaten Israel’s security interests.

Trump said his plan includes “a realistic two-state solution,” and that his administration would “work to create a territory for a contiguous Palestinian state in the future” that would “reject terrorism.”

He hailed Netanyahu as “willing to endorse the vision as the base for direct negotiations.” Calling it “a historic breakthrough,” he added: “Mr. Netanyahu, thank you for being willing to take this bold step forward.”

Trump said the plan more than doubles the territory currently under Palestinian control, while also recognizing Israeli sovereignty over major settlement blocs in the West Bank.

The Palestinians have already rejected the proposal, accusing Trump of being biased in favor of Israel as he has adopted policies that bolster Israel at their expense.

Trump thanked representatives of the Arab states of Oman, Bahrain and the United Arab Emirates for being in attendance, which could possibly mean those countries support the plan. Oman’s Ambassador Hunaina al Mughairy, asked by The Times of Israel whether her presence meant the sultanate accepts the peace plan, replied: “We haven’t seen the plan yet.”

Under the plan, Jerusalem will remain Israel’s “undivided capital,” Trump said, raising eyebrows after he had said that the capital of the Palestinian state would be in “eastern Jerusalem,” where the United States would “proudly open an embassy.”

He said the status quo in Jerusalem’s Temple Mount compound will be preserved in coordination with Jordan, which will maintain its special role in managing the Al-Aqsa Mosque (which Trump mispronounced as “al-aqua”).

He said the Palestinian state would be formed in a way that “resolves the risk to Israel’s security” and the risk of terror attacks, saying: “We will never ask Israel to compromise its security.”

“No Israelis or Palestinians will be uprooted from their homes,” he added, saying West Bank settlements wouldn’t be expanded for four years, during which negotiations will be advanced.

Trump said he was “saddened by the fate of the Palestinian people. They deserve a far better life — they deserve a chance to achieve their extraordinary potential.”

“We are asking the Palestinians to meet the challenges of peaceful coexistence,” Trump said, calling on them to pass laws enshrining human rights, “stop the malign activities” of the Hamas, Islamic Jihad and other terror groups, “end incitement” against Israel and “halt financial compensation to terrorists.”

Trump said the plan would “end the cycle of Palestinian dependence on charity.”

He said bring peace between Israel and the Palestinians “may be the most difficult challenge of all,” noting that many former US presidents had failed to achieve that. “But I was not elected to do small things or shy away from problems,” he added.

“We will be there every step of the way. It will work. If they do it, it’ll work.”

The plan builds on a 30-page economic plan for the West Bank and Gaza that was unveiled last June and which the Palestinians have also rejected.