When Your Frum Child’s in Love with a Non-Jew 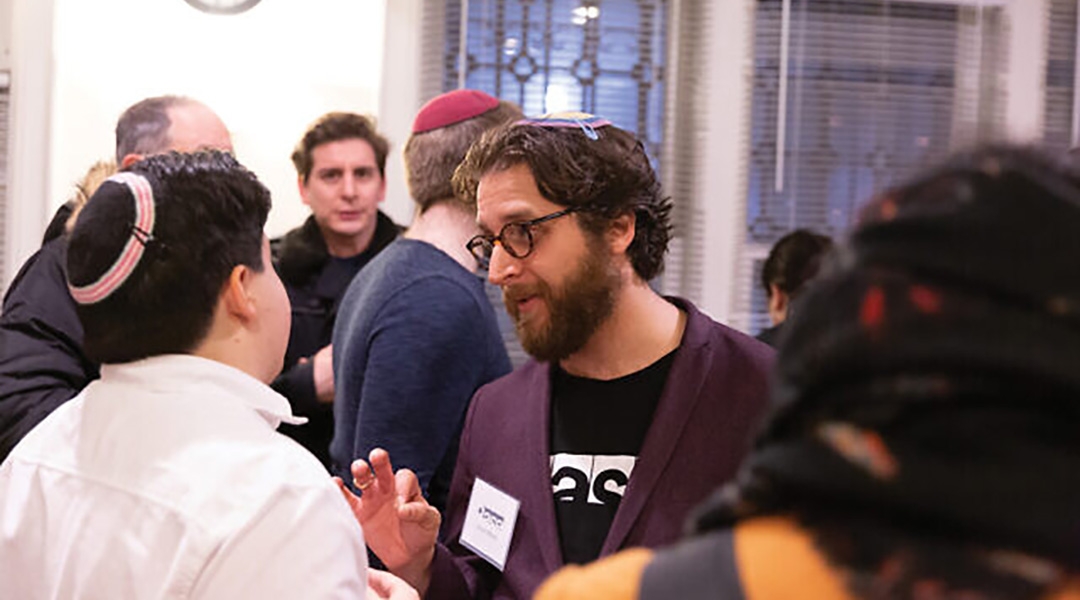 The author, center, with students at Base Hillel. “Yes, the world is changing, but think about the long game,” he writes. (Courtesy of Base Hillel)
Advertisement

I’m coming to you with a matter close to your hearts: your children.

Your children have attended the country’s finest Jewish day schools and yeshiva high schools. They spend a year or two in Israel, come from vibrant Jewish communities in Long Island, Englewood, Teaneck, Boston, Los Angeles, Chicago, Miami. They have grown up in your homes, your shuls and camps. They have experienced first-hand the sweetness of Shabbos, the history of the Holocaust, the triumphant beacon of Israel.

And then, they meet the girl, the boy, the one. And they’re in love. But the loved one isn’t Jewish.

And they don’t know what to do or who to turn to because they’re not in touch with their rabbis from yeshiva or from high school. They don’t feel comfortable turning to you because they’re not in the same ideological/religious world they were raised in. And a lot has happened between their time in Israel to the time they met their beloved. But they have a Yiddishe neshama (Jewish soul) that burns brightly in them. They are proud Jews, through and through.

And they feel at a loss.

Because some of you have said you would disown them if they brought home a non-Jew even if that person is open to conversion.

Because some of you have refused to invite them for a Shabbos meal, knowing full well they have been dating for extended periods of time.

Because some of you can’t even fathom what you would tell your neighbors and friends at kiddush.

I empathize. I am a father of three and a grandchild of Holocaust refugees and survivors. I can only imagine the emotional, financial, spiritual and religious commitment you have put into rearing your children, so that they might follow in your family’s footsteps. I appreciate this struggle deeply. I admire it, respect it and though you may be suspicious of my work (perhaps you see me as too naïve, too liberal), I devote my life to it.

And as someone who has the privilege of working with your children, especially at these moments of immense life transition, often soaked in pain, confusion and mistrust, I implore you to open your hearts.

The Amidah prayer that we recite three times a day has these words: “Upon the righteous and upon the pious, upon the righteous converts and upon us, may You place our part with them forever.” Who are we referring to if not your potential children-in-laws? While conversion has become laced with politics, we should remember these words along with the very system for conversion outlined by the rabbis. Never could our Sages have imagined the type of intermingling Jews experience today with non-Jews. We no longer live in ghettos but send our children to the top universities and anticipate the highest levels of success in their professional lives. Encountering “the other” is bound to happen, and we should remember that our tradition doesn’t shy away from this possibility but has a structure in place when the non-Jewish partner is willing to engage. If your child is dating someone who isn’t Jewish and that person is interested in conversion, that should be cause for celebration.

In the Book of Proverbs, it says: “Educate and prepare a child according to their individual path.” If your son or daughter falls in love with a non-Jew and even if they do marry outside the Jewish community, trust that your imprint on their souls has not been for naught. The counsel they seek, the rabbis they turn to, the shuls they might visit, the type of Yiddishkeit they practice might very well be different from yours. They may follow different hashgachas than you. It doesn’t mean that they don’t love you or Yiddishkeit. It means they are following their own journey of religious, spiritual formation. Allow them this opportunity of learning and expanded horizons with compassion. Try to remember your own youth.

The Torah portion in Devarim reads in part, “For you are children to Hashem, your God.” Your children will always remain your children no matter who they marry or how they raise their children. Every Yom Kippur, we implore HaKadosh Boruch Hu to have mercy upon us in the way that a parent shows compassion to their children. Compassion does not mean you must comply or agree with every life decision your child makes. But if your first response to them is crying when they tell you their partner isn’t Jewish but is looking to convert, do you think this bodes well for your grandchildren’s future Jewish education?

Yes, the world is changing, but think about the long game. You might think your attitude is upholding an ancient Torah truth, but it is not only pushing away your future child-in-law but your actions might very well push your own child away too. Think about how you’ve parented up until now. When has a closed-door policy ever worked? How have you conversed with your children about their dreams or lofty career goals? Your same parenting sensitivity can be applied here.

For those who are not at this stage, let it serve as an opportunity for reflection. Instead of simply reminding your kids they shouldn’t date non-Jews, try articulating what it is about the Jewish project that is worthwhile.

Allow yourself moments of mourning, grief and acknowledgment that your children’s world will not exactly mirror your dreams or visions. But for the sake of your children and those of us who work with them, reconsider how you react when your children bring you news about whom they love. Chances are your reaction matters more than you think.

Rabbi Avram Mlotek, a co-founder of Base Hillel, is the director of spiritual life for the international program and rabbi of its Manhattan site.

Rabbi Avram Mlotek
was named one of America's Most Inspiring Rabbis by the Forward in May 2016 and is a founder of Base Hillel, a home focused rabbinic ministry now in ten cities worldwide. He is the author of "Why Jews Do That or 30 Questions Your Rabbi Never Answered."
The views and opinions expressed in this article are those of the author and do not necessarily reflect the views of NYJW or its parent company, 70 Faces Media.