Investing Legend Sanford Greenberg Looks Back on a Life of Blindness 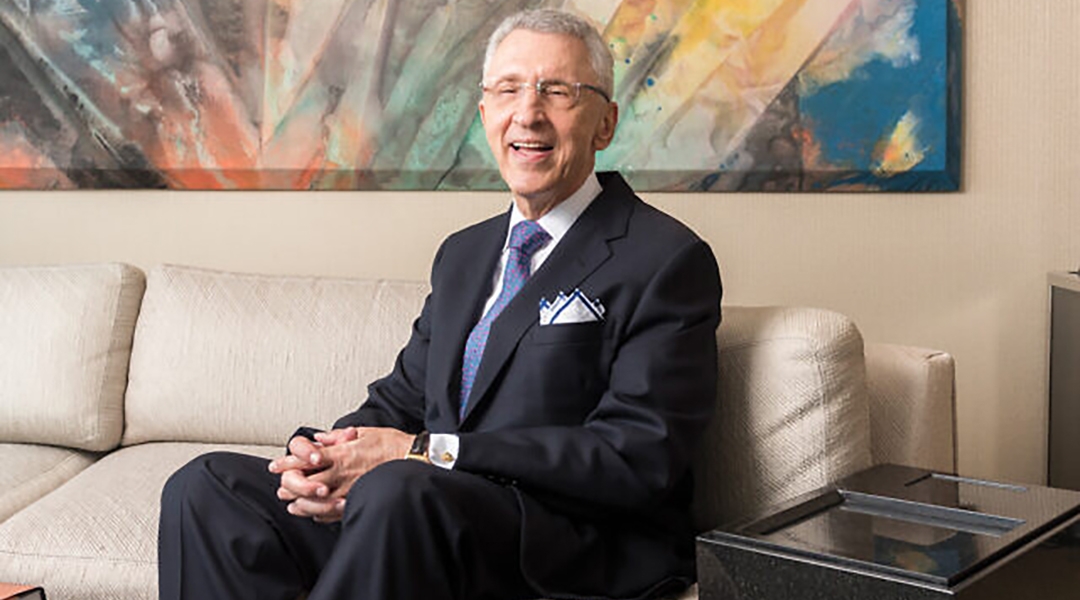 Sanford Greenberg was a junk dealer’s son from Buffalo when, in 1959, he arrived in New York City with one suitcase, to attend Columbia College on scholarship. Flourishing, he studied anthropology with Margaret Mead and poetry with Mark Van Doren, and made sure to get around the city to museums and concerts.

Within his first month on the Morningside Heights campus, he met a classmate, Arthur Garfunkel, who asked him to look closely at a certain patch of grass and consider its color and shape. He was taken with the young man’s dreaminess and intelligence, and they became fast friends and then roommates — and more than 60 years later, Greenberg and Garfunkel and their other roommate, Jerry Speyer (who would become a major New York real estate developer), remain the best of friends.

But the golden glow Greenberg felt when he entered the gates of Columbia didn’t last. During his junior year, Greenberg lost his sight to misdiagnosed glaucoma — a surgery to save his eyes couldn’t save his vision. Back home in Buffalo, he felt like his dreams of study, perhaps Harvard Law School and even a governorship, were quashed. A social worker suggested that he might become a justice of the peace in a small town or learn to cane chairs. Soon after, Garfunkel traveled up to Buffalo and convinced him to return to the Columbia campus, and that he would help in every way.

With a title inspired by his friend, Greenberg has written a memoir, “Hello Darkness, My Old Friend: How Daring Dreams and Unyielding Friendship Turned One Man’s Blindness into an Extraordinary Vision for Life” (Post Hill Press), with an introduction by Garfunkel, foreword by Ruth Bader Ginsburg and a final word by Margaret Atwood.

Greenberg ultimately graduated Phi Beta Kappa (as class president) and went on to doctoral studies at Harvard and Oxford and a life of great accomplishment, including serving as a White House Fellow under President Lyndon Johnson. He invented and holds a patent for a compressed speech machine that can speed up the reproduction of words from recordings without distorting sound, was named to presidential commissions, built companies, was a pioneer in technology and philanthropy and more. Greenberg now chairs the Board of Governors of The Johns Hopkins University’s Wilmer Eye Institute.

The memoir is for the most part focused on his childhood and education and on the early part of his career, and perhaps he will write more about his entrepreneurial success at another time. The strength of this book is in Greenberg’s powerful descriptions of blindness and his determination to choose life — not to be seen or pitied as a blind man. His is a life of resilience, never surrendering to the darkness. Readers will think anew about sight and color, about the way we see and what we see — and appreciate the light.

It’s also a story of deep friendship, written with humility and gratitude.  In the introduction, Garfunkel writes, “My friend is my gold standard of decency. I try to be his cantor, the tallis that embraces him.”

In one unforgettable scene, while they were seniors at Columbia, Garfunkel accompanies Greenberg to an appointment in Midtown to see a social worker who specializes in helping blind people. She suggested that he consider a seeing eye dog or a cane and to at least acknowledge that he was blind; he would do none of that. After the meeting, Garfunkel, studying architecture then, remembered an assignment in Midtown, and suggested that Greenberg wait for him. They argued a bit and then Greenberg said he needed to get back and set out on the subway on his own.

Stumbling, sometimes falling and getting bloodied, asking people for directions and trying to follow them, bumping into people, stumbling some more, Greenberg made his way through Grand Central Station, feeling his way onto the shuttle train and then transferring to the uptown train. He then trudged up the stairs at the 116th Street station and a man bumped into him, excusing himself — and he realized it was Garfunkel, who had been trailing him the entire time.

Greenberg recalls that he wanted to kill him — and then he was euphoric. He still feels the satisfaction he felt then, the triumph that he could be independent.

“If you can go through the New York City subway system blind, you can accomplish anything,” Greenberg says in a telephone interview from his office in Washington, D.C. “That was the defining episode of my life. That moment was the spark that caused me to live a completely different life, without fear, without doubt. For that I am tremendously grateful to my friend.”

Also at his side throughout has been Sue, his high school girlfriend and now his wife.

His earliest memories, while he was still sighted, are of tough times. His father, a tailor who fled persecution in Poland and then Germany, died when Greenberg was very young. Inscribed in his memory is a blind beggar in their neighborhood, in torn clothing, sunglasses and holding a metal cup, who has been a regular visitor in his dreams. The very first poem he wrote as a child was about the horror of blindness and cancer. A few years after his father’s death, when Greenberg was 10, his mother married her late husband’s brother Carl and their lives improved, as they moved from the city’s poorest section into their own home, and Greenberg attended a better high school, where he was class president and prom king.

He began writing the memoir in 1962 as he was starting graduate school at Harvard. He says, “I was trying to make sense of what had happened. I took out my Smith-Corona typewriter and wrote 40 pages. It was as though my unconscious was writing. I put it aside for 40 years, after decades of introspection and thought.” He began this version about 15 years ago.

Greenberg details adventures in life, including a Marshall Scholarship at Oxford, world travel on behalf of presidential commissions, trips with his kids and Garfunkel, basketball practice with Bill Bradley, often circling back to explorations of blindness.

He draws connections between blindness and memory and imagination, places where he often dwells. His memory is sharply attuned, and it’s “one of the things that saved me all these decades. I live much of my life inside my own head,” he says. “There is my mind and beyond that the universe. I have the pleasure of roaming anyplace I’d like, dreaming of the wonderful things that might be.”

Since he had 19 years of sightedness, he also has visual memories and colors remain vivid in his memory, as does the art he saw in his early years at Columbia.

“That treasure of visual images has stayed with me all these years, enabling me to visualize every situation I’m in. It may not be the view a sighted person has.”

When asked about the experience of driving through the mountains of Utah, he explains that there are some spaces you can feel, like the phrase between musical notes. “Walking between office buildings, when you come to a clearing, you can feel the space; soon you would come to another building and would feel a change. So I cannot see mountains but I can feel the space on either side of them.”

Still, he admits to difficult moments, when he might lie on the floor and listen to his friend’s recording of “Bridge Over Troubled Water.” Prayer has always been part of his life, and when asked about feelings of anger toward God, as he expressed when he first got back from the hospital, blinded. “I would be lying if I said no. I have felt anger, but rarely. I believe in what Harry Truman said: ‘I have no time for bitterness.’”

Back in 1961, when Greenberg was in the hospital in Detroit, newly blinded, he made a promise to God that he would do everything he could, for the rest of his life — to make sure that no one else would go blind. That thought has stayed with him. In 2012, he and his wife announced an international prize, End Blindness by 2020 — with a cash award of $3 million. The winner will be announced on Dec. 14, 2020.

In the announcement of the prize, Garfunkel wrote, “We are searching for nothing less than light.”

In final chapters, Greenberg details his own Blindness Balance Sheet, describing debits (“I have not seen the faces of my children”) and assets in separate chapters. He also dreams up a grand party, gathering the living and dead as guests in a ballroom on a houseboat on water “dappled with sunlight,” with music, dancing and celebration. In his toast, he describes himself — as he does when he is not dreaming — as “the luckiest man in the world.” _