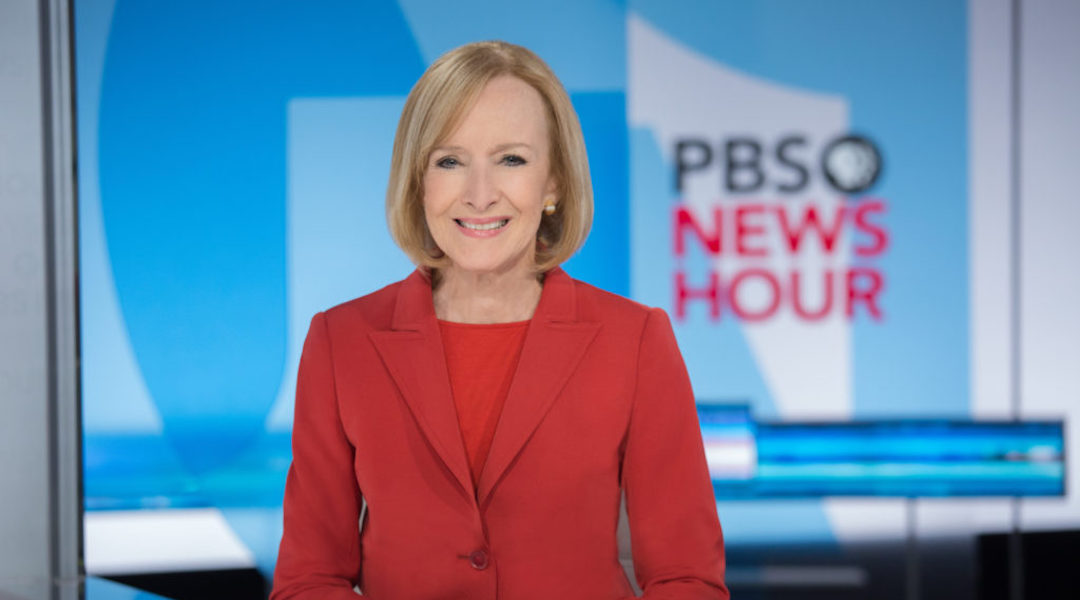 Broadcast journalist Judy Woodruff is the anchor and managing editor of the PBS NewsHour. (PBS)
Advertisement

So how do you keep your head when all about you are losing theirs?

I know my viewing habits seem a little beside the point at this fraught moment. But with friends and colleagues swapping tips on how to cope with the anxious days and sleepless nights, I thought I’d share an endorsement.

I get impatient with knee-jerk cynicism about “the media,” like a recent tweet from a rabbi who asked us to agree that most of the media are biased. That feeds into the notion that the truth is impossible to know, because all the messengers are unreliable. Actually, and despite a devastating economic environment for reporting the news, there are plenty of outlets doing the hard work of getting things right, shining light in dark places, telling the stories the powerful don’t want us to hear and the powerless need telling.

Feeding the cynicism is the cable news habit, which for most people means Fox News, MSNBC and CNN – three networks that dish up more partisan outrage than actual reporting, especially in prime time. And even when you remove the bias, you need to remember this: Panel discussions are not journalism. When you see four or five heads floating on a screen, that means the bodies attached to them are not out gathering quotes, sifting through documents, or being eyewitnesses to whatever topic they are covering. They are chatting.

All three networks have reporters on the ground, and some hosts are better than others in keeping the chats grounded in fact, but no one watches cable news to get the “real story.” Knowing this, the shows aim at rallying a like-minded audience around a set of assumptions, some more reality-based than others.

“NewsHour,” which airs for one-hour on weeknights and a half-hour on weekends, takes a decidedly old-fashioned approach. The anchor, Judy Woodruff, delivers the news like a camp nurse calling parents at home: “First of all, everything is all right. But Donnie and Joey got in a little scrap today, and I’m afraid your fella got a little bruised.” It’s a relief from all the “BREAKING NEWS” hysteria on cable.

“NewsHour” has a small crew of top-notch on-air reporters who share Woodruff’s sober approach to the news. When the pandemic allows, they hit the streets to do both spot news and good long-form reporting. Confined to their living rooms, they ask pointed, challenging questions of their Zoom guests, letting them hang themselves on the ropes of their own contradictions or lies, or soberly share facts about, say, the pandemic or the economy.

The show’s breakout star is Yamiche Alcindor, the White House correspondent, who seems to be a particular bane of President Trump. Back in March Trump grew impatient with a perfectly reasonable line of questioning by Alcindor on medical supplies, interrupting her to say, “Look, let me tell you something. Be nice. Don’t be threatening. Be nice.” Many observers noted that Alcindor is Black, and that calling her “threatening” was the kind of epithet Trump reserves for African Americans and women. I’ve watched the tape and the only word I would use to describe her performance is “professional.”

Still, Alcindor is called on to report on a lot of nonsense coming out of the administration, and I sometimes suspect that she wants to begin her reports by saying, “You are not going to believe this, Judy, but….” Still, Alcindor always plays it straight.

It’s fair to ask if the PBS approach is the right one at a time when the White House is shattering norms on a daily basis. Is it really serving the public to present “the view from nowhere” — philosopher Thomas Nagel’s term for dangerous neutrality — when a public figure engages in a daily assault on the truth and the institutions he was elected to uphold? (It’s a question that has been torturing The New York Times, which is facing what New York magazine describes as an internal “insurrection” by staffers who think objectivity is acquiescence with  a corrupt regime.)

All this week, with Trump refusing to accept the results of the election and Republican leaders going along with his baseless attacks on the integrity of the vote, “NewsHour” has stuck to its (modest) guns. It brought on guests like Republican attorney Benjamin Ginsberg and David Marchick of the nonpartisan Center for Presidential Transition to calmly explain the dangerous game Republicans are playing.

Too many of us don’t want news that informs, especially if it challenges any of our closely held beliefs.

What worries me is that the PBS approach barely speaks to an angry, polarized, hair-on-fire audience. (I had a weird moment earlier this week, during a report on Biden’s potential economic policies, when I was frankly bored with the news. Trump has conditioned us to expect outrage on the hour, every hour.) Too many of us don’t want news that informs, especially if it challenges any of our closely held beliefs. We complain about bias in the media, then pledge allegiance to news outlets that confirm our own biases.

The onus, however, is on us, as consumers of the news. Instead of blaming the media, we need to be discerning viewers and readers. Enjoy cable news for what it is: a performance of our prejudices, larded either with disinformation or like-minded chatter. Be aware of the biases of outlets that you tend to agree with, and learn to distinguish between opinion and fact, advocacy and information.

And when you do have your list of reliable outlets, reward their responsible, fact-based reporting — of which there is plenty — with subscriptions and pledges, as in cold, hard cash.

And even Judy Woodruff isn’t above a little editorializing, however indirect. At the end of segment Monday on the death of Alex Trebek, the incomparably decent host of “Jeopardy!”, Woodruff turned to the camera and said, “Proof again that nice guys can finish on top.”