A Jewish librarian spied on New York Nazis in the 1930s 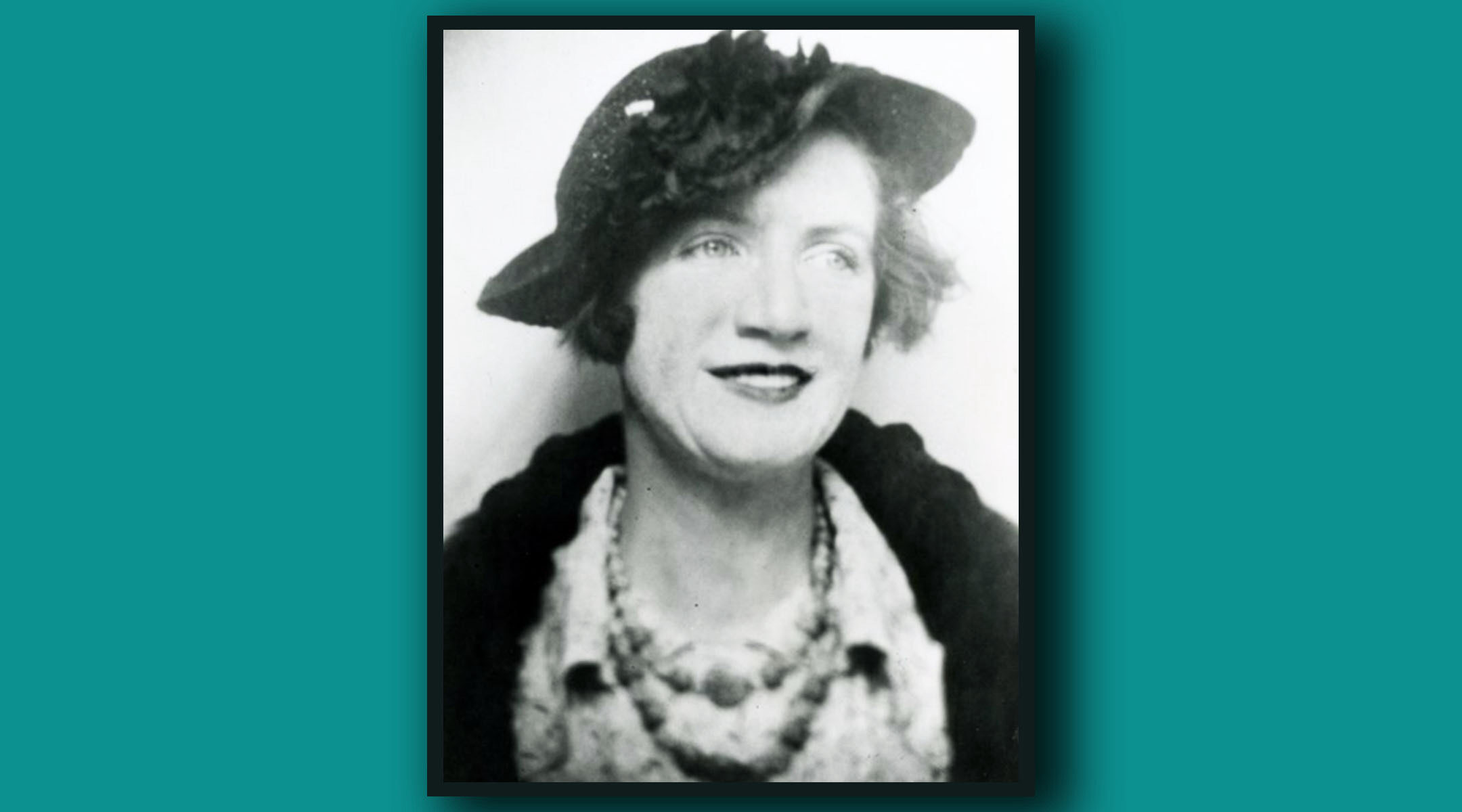 (New York Jewish Week via JTA) — There is zero evidence that Florence Mendheim was the inspiration for Batgirl. But the real-life Jewish woman from the Bronx and the fictional daughter of Gotham City’s Commissioner Gordon were both librarians who led secret double lives fighting bad guys.

In Mendheim’s case, the villains were German-American Nazi sympathizers who met in taverns and beer gardens throughout New York City in the mid-1930s. The daughter of a German-Jewish family that still had close contact with relatives back in Berlin, Mendheim would end her day’s work at the New York Public Library branch in Manhattan’s Washington Heights neighborhood and go spy on meetings of the Friends of New Germany, later the German American Bund.

Pretending to be a Nazi sympathizer herself and working under various aliases, she’d gather names, take notes and collect pro-Nazi and anti-Semitic material for the American Jewish Congress.

Boxes of that material now sit at the New York branch of the Leo Baeck Institute, the research library and archive focused on the history of German-speaking Jews.

“I don’t know whether she was recruited or volunteered, but it was clear from what was happening in Germany and to her relatives – and just being Jewish – she really was dedicated to stopping the Nazi threat in this country,” said Michael Simonson, head of Public Outreach and archivist at the Leo Baeck Institute.

On Tuesday, Simonson joined a virtual panel about Mendheim co-presented by the Museum of Jewish Heritage-A Living Memorial to the Holocaust, Leo Baeck Institute and the Brooklyn Public Library. His fellow panelists included Marshall Curry, director of “A Night at the Garden,” a short film about a 1939 Nazi rally at Madison Square Garden, and Daniel Greene, president and librarian at the Newberry Library in Chicago and curator of the U.S. Holocaust Memorial Museum’s “Americans and the Holocaust” exhibit.

Although planned well before the Jan. 6 insurrection at the U.S. Capitol, the panel focused on a hero of  another era in which private citizens and interest groups were ahead of law enforcement in grasping the threat from right-wing domestic extremists.

In the 1930s, pro-Nazi sentiment was prevalent throughout New York: in Bay Ridge, Brooklyn; Ridgewood, Queens, and in the historically German neighborhood of Yorkville on Manhattan’s East Side. Hitler’s deputy Fuehrer, Rudolf Hess, gave immigrants permission and direction to establish Friends of New Germany to support National Socialism and isolationism. By 1935, Hess understood that a pro-German American organization should be seen as homegrown and ordered all German citizens to leave the group, as well as the name change to the German American Bund – “to make it sound more pro-American,” said Simonson.

The organizations would sponsor concerts and summer camps, leading many Americans to assume they were simply cultural organizations.

Mendheim, a single woman living with her family in the Bronx, was likely brought into the domestic spy trade through the American Jewish Congress.

The group’s founder, Rabbi Stephen Wise, had already started a boycott campaign against German goods in response to the Nazis’ anti-Jewish boycott in Germany. Wise saw support for the Nazi cause among German immigrants, and realized their meetings were more sinister than a typical “home country” gathering, or “verein.”

From 1933 until about 1938, Mendheim would travel to pro-Hitler meetings throughout the city, sometimes at great personal risk. Often after a meeting she’d be offered a ride home by another participant – Simonson said she was never sure whether the driver was being kind or perhaps had suspected her. Mendheim never let them drive her back to the Bronx, and asked to be dropped off at an address on 86th Street in Manhattan. She’d skulk in the lobby until the car drove away, then dash into the subway for home.

Sometimes she’d been taken to the Café Hindenburg on East 86th Street to meet with other Nazis. The meetings were a goldmine of information — but also frightening. Members would greet each other with a German phrase meaning “kill a Jew.” Meanwhile, her two brothers would be waiting for her at home, terrified she wouldn’t return.

“It was scary,” Simonson said of Mendheim’s late nights at the cafe. “Has she been found out? Had they hurt her or beat her up? Or was a Nazi going to try and make a pass at her – which Florence would have found even more repellent?”

Calling herself Gertrude Mueller, Mendheim went so far as to work as a secretary for Friends of New Germany. Some accounts suggest that she quit the inside job because her cover was blown, but Simonson hasn’t found any evidence of that.

The boxes in the Leo Baeck collection are largely propaganda produced by the Nazi sympathizers and other hatemongers, and Mendheim left behind few personal writings.

“I think her idea was always that the American Jewish Congress would give their reports to the FBI,” Simonson said. “I’m not sure if they did that or not, but it’s certainly possible.”

Either way, lawmakers had access to pro-Nazi material when they launched a series of hearings in 1938 to investigate allegations of Nazi infiltration. Later, as the House Un-American Activities Committee, the body became notorious for hounding real and alleged communist sympathizers.

“It’s hard to say how much she was able to tell, but I think quite a bit,” Simonson said. “Everybody had an alias, even in these meetings, and she had to fraternize and get them to reveal their real names.”

America’s entry into the Second World War led to a quick crackdown on pro-German groups, and their leaders were often interned or deported. Little is known of what happened to Mendheim after she quit spying, probably in 1938, although Simonson said she taught Jewish adult study classes and tried her hand at writing novels – thrillers, in fact, that often starred a daring femme fatale. Never married, she later served as secretary of the Committee for Arab-Jewish Understanding, an organization promoting a binational Arab-Jewish state in prestate Israel.

She died in 1984, and the material kept by her brothers eventually made it to the Leo Baeck Institute. The Center for Jewish History has written about Mendheim and her archive, and an exhibit at the New-York Historical Society included a panel about her life and work.

“There are sad things about this story,” Simonson said. “She didn’t write about her time as a spy, and later in life she didn’t talk about it, and when she did people didn’t pay much interest. Later in life she’d call herself ‘Ye Olde Heroine.’ She was quite a character.”

Asked if the extremist activity Mendheim infiltrated had resonance for today, Simonson said, “I’ve been thinking about it a lot. It is interesting to see how these racist arguments and anti-Semitism don’t change. It’s a constant repetition of these rehashed theories.”

He recalled a comment that Donald Trump made about Henry Ford, saying the industrialist and notorious anti-Semite had “good bloodlines.”

“Who says that? Who knows that?” Simonson asked. “We do know that the Bund was very active in Queens” — where Trump grew up, the grandson of a German immigrant — “and Henry Ford’s anti-Semitic book ‘The International Jew’ was a bestseller in Nazi Germany and sold well here.”

Simonson said people look back on the 1930s and think “‘I can’t believe it happened here,’ even though I’d argue, how could it not, when you look at America’s history.”