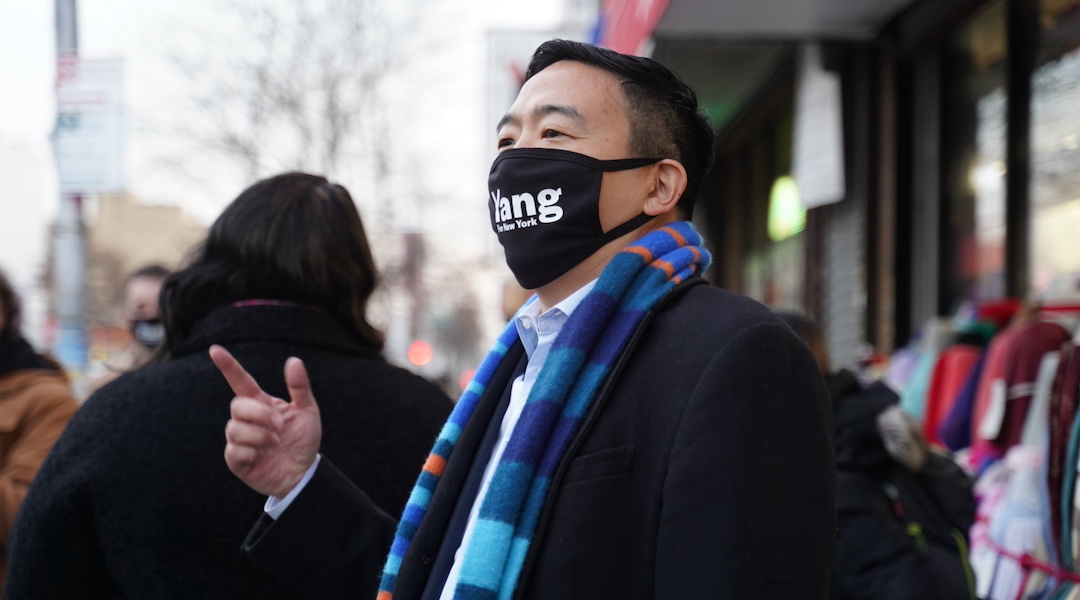 New York City mayoral candidate Andrew Yang, asked about improving secular education at yeshivas, said "we shouldn’t interfere with their religious and parental choice as long as the outcomes are good.” (Yang for New York)
Advertisement

(New York Jewish Week via JTA) — New York mayoral candidate Andrew Yang waded into the debate over the push for secular education at yeshivas, affirming “parental choice” and saying there is a “complete lack of trust” between the haredi Orthodox community and city government.

Organizations that oppose government scrutiny of secular education at the Jewish private schools were quick to praise Yang for his comments.

“We commend any candidate who affirms the importance of parental choice and who recognizes the healthy results of yeshiva education,” said Rabbi Yeruchim Silber, director of New York government relations for Agudath Israel of America, the haredi umbrella group. “This is indeed an issue of fundamental importance to our community.”

But a nonprofit organization that advocates for reform at city yeshivas isn’t having it.

Talk of a “breach of trust” is a “totally made-up” issue, said Naftuli Moster, executive director of Yaffed, which advocates for secular education at New York City’s yeshiva schools.

“What broken trust?” asked Moster, who described the relationship between the current administration and the haredi Orthodox community to be “more friendly than any city administration in the history of New York City.”

Yang, a businessman and a former Democratic presidential candidate, discussed the issue earlier this week with the Forward, saying “we shouldn’t interfere with their [yeshivas’] religious and parental choice as long as the outcomes are good.”

In a statement to The Jewish Week, Yang doubled down on his previous statements.

“There has been a complete lack of trust recently between the ultra-Orthodox community and City and State government,” he said. “We need to revamp this relationship and acknowledge that educators at Yeshivas and City education officials are all working towards the same goal – to ensure NYC students receive high-quality education.”

Yang is perhaps the first in a crowded field of candidates to broach the yeshiva issue, which has embroiled the haredi Orthodox community since the administration of Mayor Bill De Blasio announced in 2015 that it would investigate a complaint alleging that dozens of Brooklyn yeshivas were violating state law by giving their students a subpar education in English, math and other secular subjects.

Both sides in the debate declared partial victory in late 2019, when a long-delayed city Department of Education report found few yeshivas offering secular educations “substantially equivalent” to state requirements, but also that the majority were making progress.

De Blasio’s terms in office have demonstrated the importance, and pitfalls, of nurturing relations with the haredi Orthodox, who form powerful voting blocs in neighborhoods like Brooklyn’s Crown Heights and Williamsburg.

Last year, dozens of Jewish organizations and leaders criticized de Blasio for singling out the “Jewish community” in a tweet criticizing a large Hasidic funeral held in defiance of coronavirus restrictions. De Blasio later apologized for the comment.

Despite that controversy, Moster cited several policies instituted by the de Blasio administration that were well-received by the community. They included repealing regulations surrounding a controversial circumcision ritual that has been linked to the transmission of the herpes virus, permitting the use of government vouchers at religious schools, and increasing security funding for yeshivas and synagogues.

“Any notion that there’s some sort of broken trust that we need Andrew Yang to repair is just utterly insane,” Moster said.

In his statement to The Jewish Week, Yang went on to promise that if elected mayor, he will “always respect religious freedom including the freedom of parents to do what’s best for their kids educationally. Thus, we shouldn’t interfere with their religious and parental choice as long as the outcomes are good.”

Moster criticized Yang for his “brazenness to opine on issues of religious freedom” without reaching out to discuss the issue with groups like Yaffed. He referred to subpar secular education at yeshivas as “a major civil rights issue, an education policy issue,” as opposed to an issue of religious freedom.

“If the way the city repairs ‘trust’ with the ultra-Orthodox community is by throwing kids under the bus, Yang is right on track,” he said.

Richard Bamberger, a spokesperson for a group that advocates for school choice and decreased supervision of New York City yeshivas, welcomed Yang’s comments.

“We are gratified that many of the mayoral candidates have acknowledged what we have always known: Parents choose yeshiva education for their children because they are confident that they will graduate with the skills and the knowledge to have a successful life,” said Bamberger, who represents Parents for Educational and Religious Liberty in Schools, or Pearls.