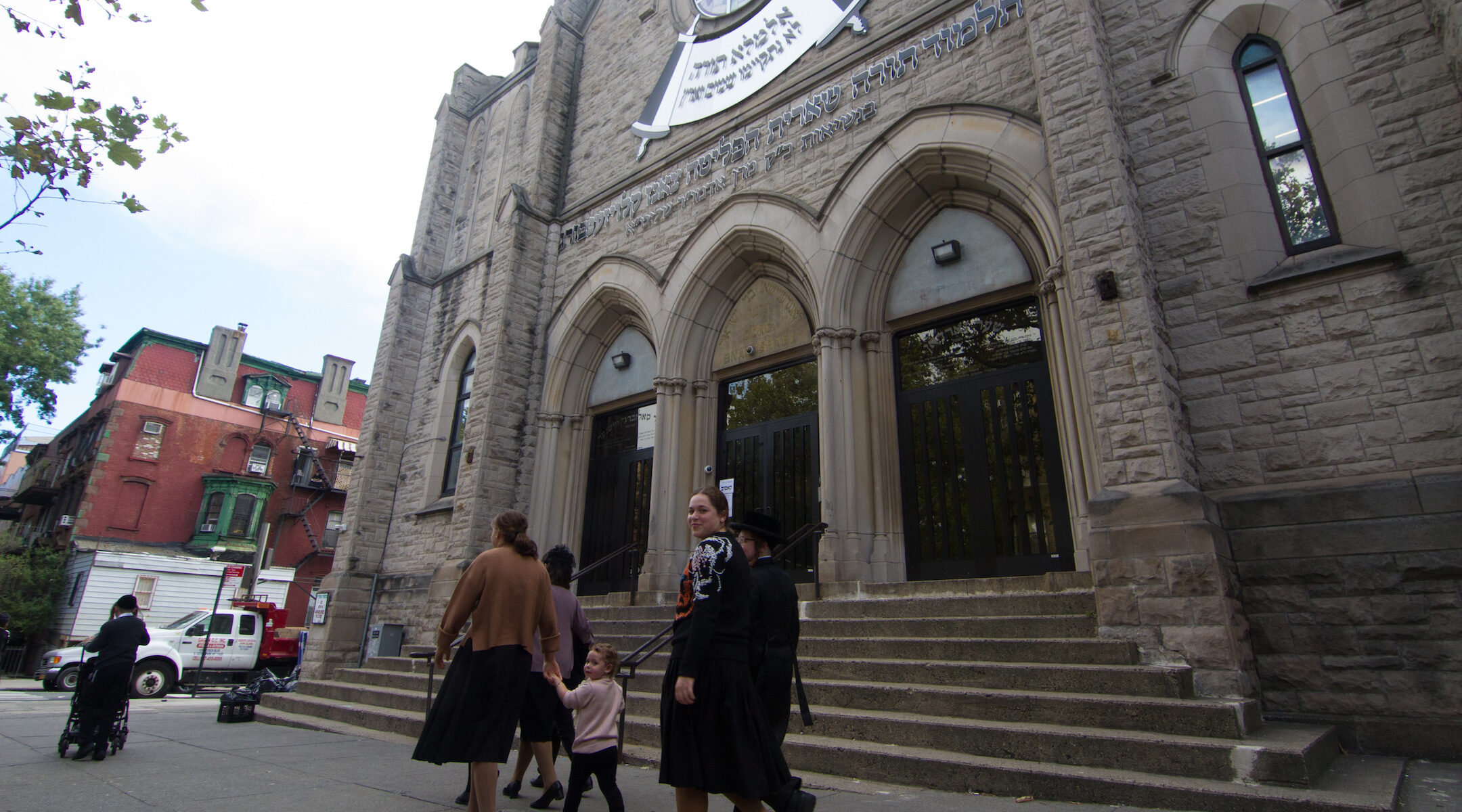 Hasidic women walk past a yeshiva in the Williamsburg section of Brooklyn, Sept. 29, 2020. (Daniel Moritz-Rabson)
Advertisement

(JTA) — When Bill de Blasio ran for mayor of New York City in 2013 and for reelection in 2017, oversight of secular education in haredi Orthodox yeshivas wasn’t a major part of the race.

This year, however, some candidates hoping to succeed de Blasio are wading right in. Critics of the yeshivas say the schools are failing to provide their students with an adequate education in English, math and other secular subjects. Some top candidates, meanwhile, are promising to keep the city’s education officials from interfering in yeshiva curricula.

No candidate has gone as far as Andrew Yang, the former Democratic presidential candidate and tech entrepreneur. At least twice on the campaign trail Yang said he would “respect religious freedom” — a political value that has become increasingly central to Orthodox political advocacy in recent years — and essentially allow parents and administrators of the parochial schools to decide what’s best for their children.

The biggest difference between the past and the current mayoral campaign is an investigation by the city’s Department of Education. The probe, launched in 2015, found that 26 of the 28 yeshivas examined were not meeting state secular education standards. A delay in releasing its results led to charges that de Blasio had slow-walked the report in deference to Orthodox leaders.

The investigation wouldn’t have happened without the activism of Young Advocates for Fair Education, or YAFFED, a group founded in 2012 by yeshiva graduates who believe that some haredi and Hasidic yeshivas leave students ill-prepared for the world beyond their Yiddish-speaking communities. The group organized a 2015 letter from yeshiva graduates and parents of yeshiva students that accused 39 local yeshivas of failing to meet state secular studies requirements and prompted the investigation of the more than two dozen schools.

In a city where the Orthodox vote can be crucial, and a crowded field of candidates are jockeying for attention ahead of an all-important June 22 Democratic primary, the issue has become a hot button. In New York, mayors assert substantial control over the local schools.

“As long as there’s mayoral control, at least for the time being, it’s everything, it makes all the difference,” said Naftuli Moster, executive director of YAFFED.

Haredi Orthodox voters, meanwhile, see criticism of yeshivas or suggestions that they be subject to greater scrutiny by city officials as an attack, according to Hank Sheinkopf, a longtime political consultant.

David Bloomfield, a professor of education at Brooklyn College and CUNY Graduate Center, as well as an advocate for greater oversight of secular education in yeshivas, agrees.

“No mayor has fulfilled their obligation in that area, and the main reason is because of the voting strength of the ultra-Orthodox leadership,” Bloomfield said.

Since 1894, New York has required private schools to provide a secular education of “substantial equivalency” to that provided by public schools.

The city’s investigation into 28 schools, completed in 2018, found that only two were actually meeting state standards. YAFFED leaders believe there are likely more schools failing to meet the standards.

But YAFFED has received intense pushback from leaders of the haredi Orthodox community. A rival group, Parents for Educational and Religious Liberty in Schools, or PEARLS, was founded in 2015 and is “committed to protecting the fundamental right of parents to choose that their children receive the intensive religious instruction and academic programs offered at yeshivas,” according to the group’s mission statement.

PEARLS appreciates the hands-off approach proposed by Yang and others.

“We are gratified that the leading mayoral candidates have repeatedly acknowledged what we have always known: Parents choose yeshiva education for their children because they will graduate with the skills and the knowledge necessary to lead successful careers and lives,” Rich Bamberger, a spokesperson for PEARLS, said.

Yeruchim Silber, director of New York government relations for Agudath Israel, a haredi advocacy organization, said candidates should “understand that parents of yeshiva students have made a choice and to respect that choice,” framing yeshivas as an issue of religious freedom.

“The state should not impose a one-size-fits-all solution on all yeshivas including what courses to teach and how many hours to teach each one,” Silber said in an email.

Several candidates have promised to keep the city from interfering in yeshivas, a stance appealing to Orthodox voters. Yang has tacked in different directions on the issue. In January he told Politico that “Schools failing to meet baseline standards should be investigated.” The next month, at a forum sponsored by the politically liberal New York Jewish Agenda, he appeared to side with the yeshivas, saying “If a school is delivering the same outcomes, I do not think we should be prescribing rigid curricula.”

Moster, responding to Yang’s comments in the New York Daily News, said Yang’s focus on “outcomes” — as opposed to enforcing required curriculum standards — would give yeshivas “free rein to continue failing their students.”

In an interview published Tuesday by the haredi newspaper Hamodia, Yang again suggested that schools be given wide leeway in the name of “religious liberty” and to keep the focus on outcomes.

“We should not be interfering as long as the educational outcomes are good. But we need to be driven by the data,” he said.

Also vying for mayor is Eric Adams, who has fostered close ties with Orthodox communities in Brooklyn during his tenure as Brooklyn borough president. At a visit to a Brooklyn yeshiva earlier this month, Adams praised the school.

“I was really impressed by what I saw,” he told the Forward. “Watching those children understand grammar, understand English, saying they like writing and reading, it was amazing.”

Adams declined to name the yeshiva, though Simcha Eichenstein, an Orthodox city councilman representing Borough Park, told the Forward it was one of the “29 yeshivas most heavily scrutinized by the city.” The Adams campaign did not respond to JTA’s request for the name of the yeshiva he visited.

“A cornerstone of his philosophy is cultural familiarity in education, and how important it is for a child to see him or herself in their education,” Shapiro said. “This principal guides his approach to yeshiva education as well, and what he saw was children experiencing subject matter in a culturally sensitive way, where each student felt a part of what they were learning.”

Scott Stringer, the city comptroller and a mayoral candidate, told Hamodia in an interview this week that he would “work with the yeshivah community that I have strong relations with to make sure that we meet the standards that are applied.”

“No, we’re not barnstorming into yeshivas. We’re going to work with the education leader of the yeshivah,” he said.

Kathryn Garcia, a former Sanitation Department commissioner, also appears to be stepping lightly about enforcement of state standards for secular education. In a recent op-ed in the Forward, she praised yeshivas without getting into detail about enforcement.

“In ensuring all our schools are preparing our youth for bright futures, I will focus on improving our public school system, and will be vigilant about counteracting assumptions about religious education,” she wrote. “The majority of our city’s parochial schools, including yeshivas, provide a strong educational foundation for children whose parents have chosen a non-traditional public school environment.”

While it’s still early to declare a frontrunner in a race that will take place in June, recent polls have shown Yang with a substantial lead. Within the Orthodox community, Adams and Yang are seen as two of the favorites.

“There’s no question that Orthodox Jews are most enchanted with Adams and Yang,” Sheinkopf said.

Even for candidates who are not actively courting the Orthodox community, no candidate wants to appear to be insensitive to a religious group, especially one that comprises a substantial voting bloc. At the same time, they don’t want to appear to be lowering educational standards.

With activists and the media continuing to scrutinize the investigation of yeshivas, the issue is unlikely to disappear when the race is over.

“It’s become such a controversial issue,” Botnick said. “People are paying attention to it.”