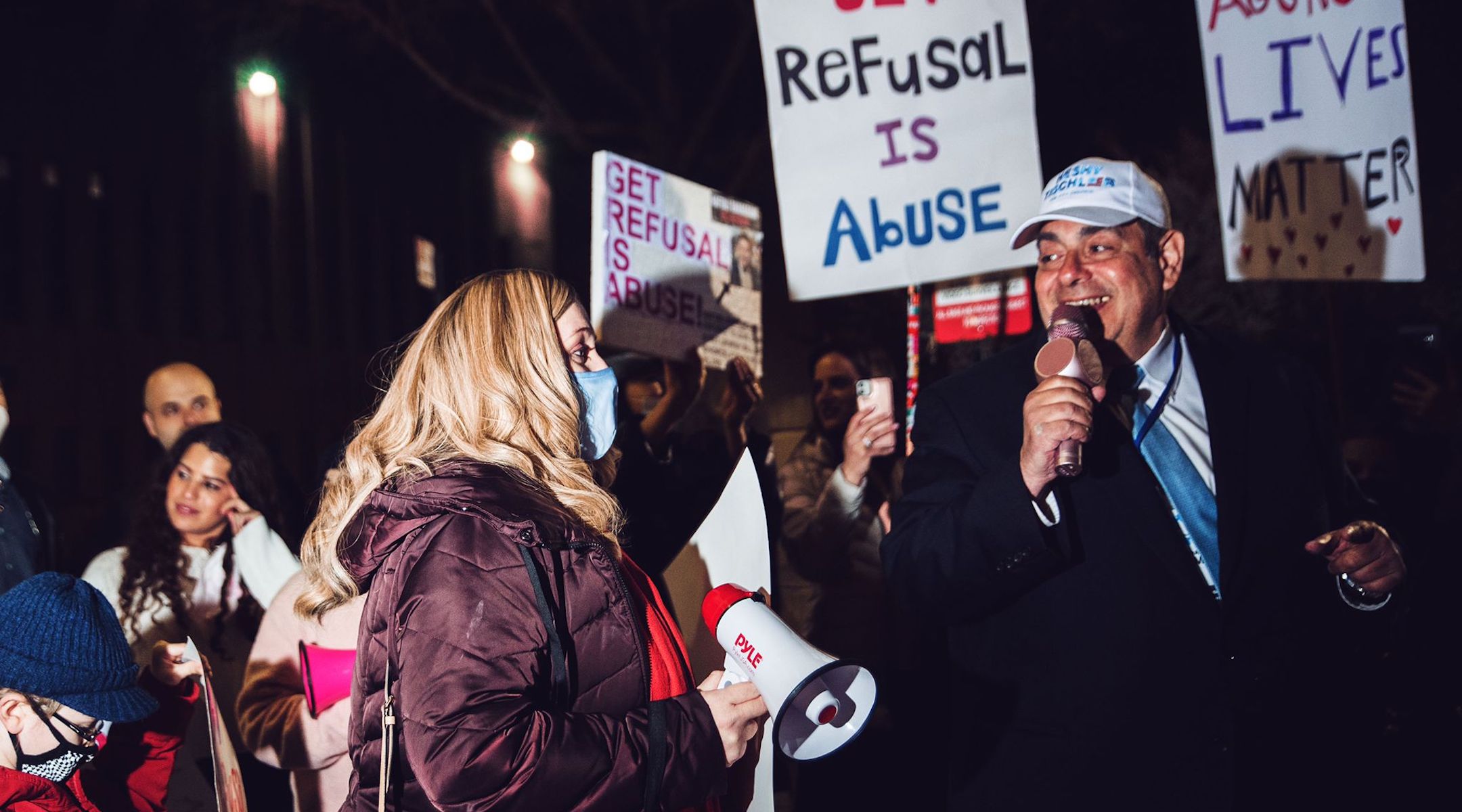 Amber Adler, left, and Heshy Tischler, candidates for New York City Council, attend a rally in Brooklyn, March 21, 2021. The rally was part of a movement to free a woman whose husband refused to grant her a Jewish divorce. (Anna Rathkopf)
Advertisement

(JTA) — It was only about 20 minutes into the virtual debate when the moderators had to mute two of the candidates for New York City Council.

Amber Adler, an Orthodox Jewish activist and mother of two, had just told the other candidates about an attempted brick-throwing attack that she and her family had experienced recently. Heshy Tischler, the Brooklyn provocateur who pleaded guilty last month to inciting a riot at a protest against coronavirus restrictions, accused Adler of fabricating the episode.

Then the shouting began.

“I do want to reiterate that at the heart of this debate slash discussion is really about who can best represent Council District 48,” said Skye Ostreicher, one of the moderators of the Politics NY debate. “So let’s tie everything back to that.”

For residents of District 48, which covers a swath of South Brooklyn and includes neighborhoods with large Jewish populations like Midwood, Gravesend, Sheepshead Bay and Brighton Beach, the June 22 Democratic primary is less about ideology than it is about tone and personality. Several of the candidates have switched between the Democratic and Republican parties, and parts of the district voted overwhelmingly for Donald Trump in the 2020 election.

And the race features plenty of personalities.

Tischler is perhaps the best known of the candidates, having come to the city’s attention as the face of the anti-mask and anti-government protests by Orthodox Jews in Borough Park in October. Though hardly the favorite, the implementation of ranked-choice voting means he can’t be ruled out.

All the candidates are talking about public safety as a top issue in the district, citing shootings and antisemitic incidents as evidence that funding should not be taken away from the police. Special education teacher Steven Saperstein has been endorsed by the police union, while attorney Binyomin Bendet has called for “refunding” the police. 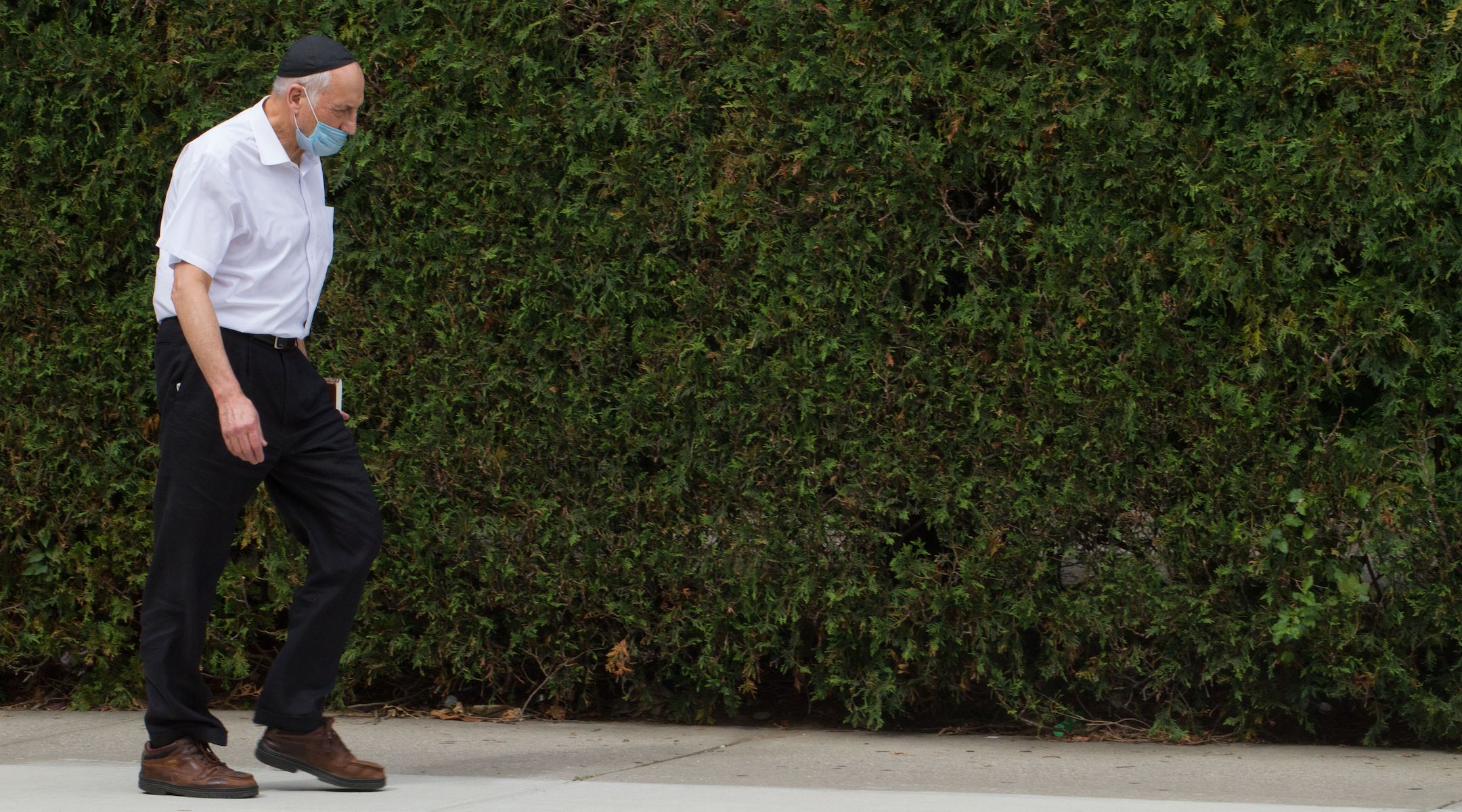 Saperstein, Bendet and Mariya Markh, who has worked as an aide for three City Council members, are considered the front-runners in the Democratic primary. All three are Jewish.

Markh, who grew up in the Soviet Union and came to the United States in 1990, is the establishment candidate with endorsements from New York State Assemblyman Steve Cymbrowitz and other local elected officials.

Saperstein is well known to area residents from his previous campaign for the City Council seat as a Republican in 2017 and an Assembly run in 2018.

Bendet is the least experienced of the group but has raised the third largest amount in the city’s public matching funds program since joining the race in January.

The City Council is made up of 51 seats, 35 of which are up for grabs this year due to term limits. Council members have the power to write new laws, negotiate the budget, have oversight of city agencies, control their own discretionary funding within their district and generally act as a check on the mayor’s power.

Unlike neighboring District 44, which encompasses much of Borough Park and has been represented on the City Council by Orthodox Jews for years, District 48 has not historically elected Orthodox Jews.

So when Chaim Deutsch won the district in 2013, it was a major coup for the Orthodox Jewish community there, which is mostly not Hasidic and less given to voting as a bloc. A council member is considered a key way of earning support for local community organizations through discretionary funds and addressing perennial community issues like building permits and parking issues.

Deutsch could not run again this year due to term limits, and in April he was expelled from the City Council after pleading guilty to charges of tax evasion.

Bendet’s campaign, seeking to capitalize on fears that the seat would be held by someone who is not Orthodox, mailed flyers that called Bendet “the only frum candidate with real experience who knows and deeply understands our community.”

“Having a frum council member has done wonders for our community,” the flyer proclaims, using a Yiddish term for Orthodox. “Let’s keep it that way.”

But Bendet is far from the only Orthodox or observant candidate seeking the seat.

Adler, who worked on Deutsch’s 2017 campaign, believes maintaining Orthodox representation at a time of rising antisemitism is key.

Adler’s campaign might be hobbled, however, by the fact that newspapers and magazines serving the Orthodox community refuse to publish her — or any woman’s — photograph, as she noted to Politico.

Markh, though not Orthodox, described herself as traditional. And Inna Vernikov, who as the sole Republican candidate will run against the Democrat in the November general election, is observant.

Tischler, who has a weekly radio show, is also Orthodox, although his legal troubles may dampen his appeal in a district that just lost a council member due to tax fraud. Tischler was sentenced to 10 days of community service after being charged with inciting a riot: In October, he egged on a crowd of Hasidic men in Borough Park who were physically threatening a Jewish journalist, Jacob Kornbluh, at a rally to protest COVID restrictions. Brazen and unrepentant, Tischler has earned — and welcomed — comparisons to Donald Trump.

In spite of or because of his infamy, Tischler has a following in the Orthodox community and has raised more private funds than anyone in the race, although that doesn’t necessary translate into votes.

The Flatbush Jewish Community Council, or FJCC, an organization representing the Orthodox community in Midwood, declined to endorse anyone in the District 48 race, although it did endorse for mayor, comptroller, borough president, the 45th District City Council seat and two judgeships.

“There are several good candidates, please do your research and select one,” reads a flyer from the community council announcing its endorsements in other races.

Asked why the FJCC chose not to endorse in District 48, its chairman reiterated the flyer’s message.

“There are a number of qualified candidates running with similar platforms & positions,” Josh Mehlman wrote in an email to JTA. “Our leadership felt that in this specific race, because of their similarity on the core issues, individual candidates should take their case directly to the electorate and let the best man or woman emerge.”

Asked what the next City Council member could do for the Jewish community, Mehlman cited a need to put more city resources into policing to fight crime, antisemitism and hate crimes generally; to clean up the streets; and to support small businesses. He also hoped the candidate would protect religious rights.

One local Jewish leader said that while there is no clear favorite in the race, ranked-choice voting means even wild cards like Tischler can’t be ruled out.

With ranked-choice voting, voters rank their top five candidates, and a winner is declared only when someone wins at least 50% of the votes plus one.

“Ranked-choice voting means everybody has a chance,” said the leader, declining to be named over concerns that Tischler would come after  him on his weekly radio show.