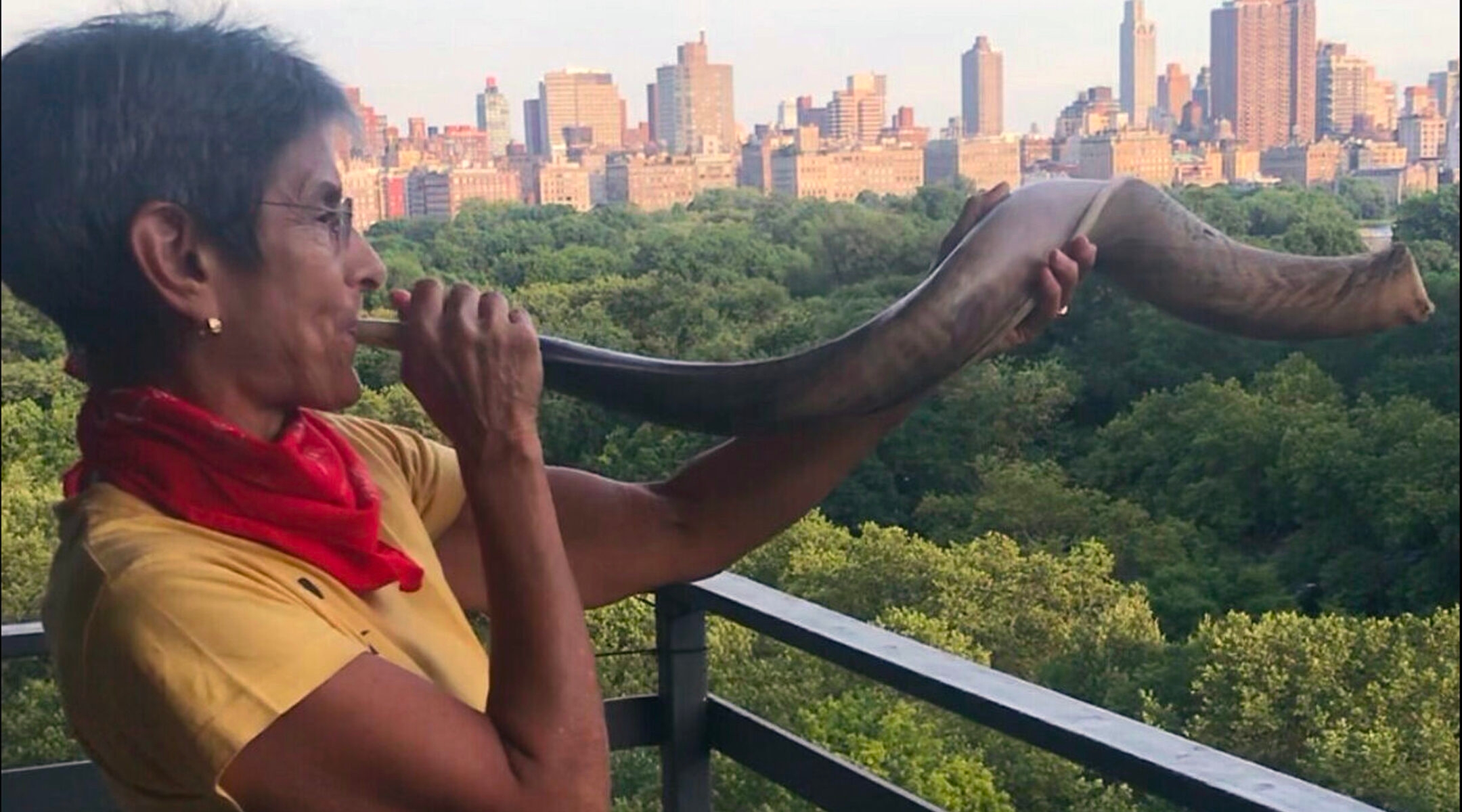 Since the early days of the pandemic, Rabbi Janise Poticha has kept up her shofar-blowing at 7 p.m. daily as a salute to health care workers. (Lydia Orias)
Advertisement

(JTA) — Rabbi Janise Poticha had been blowing the shofar on her terrace every evening at 7 for five months when the daily ritual began to take on a new meaning.

Her sister contracted COVID in August and, after a week and a half at home, had to be hospitalized and later intubated.

“She spent a great amount of time closer to death than life,” Poticha said.

Unable to visit her sister in the hospital, Poticha continued to join the 7 p.m. cheers for health care workers by blowing the shofar, a ram’s horn, every evening from her Upper West Side apartment’s terrace. For Poticha, a rabbi at Temple Sinai of Massapequa on Long Island, the shofar reminded her of the binding of Isaac when Abraham slaughters a ram in place of Isaac, allowing Isaac to live.

“During that time, not being able to be near her or her immediate family, the blowing of the shofar to me became another symbol of life as it was a symbol of life for Isaac,” Poticha said.

The evening salute to health care workers was started in March 2020 but abandoned by most people within a few months as the first wave of the pandemic ended. For Poticha, for whom the cheer became a ritual, there needed to be some kind of formality to the way it ended rather than letting it peter out.

Her sister would spend several months in the hospital before moving to a rehab facility and eventually going home. Even after celebrating that milestone, Poticha continued to sound the shofar at 7 each evening — to the disappointment of some of her neighbors.

The week after receiving her first dose of the vaccine this spring, she blew the shofar at 7 as always. Now, however, she felt a new sense of hope.

“Wow, you know, maybe there will be a light if everyone does this,” she thought to herself.

When Gov. Andrew Cuomo announced that New York would begin reopening last month, Poticha figured perhaps it was the moment to end the cheer.

“I actually thought, well maybe this is the time that we stop doing us,” she said. “I asked some of the people that were in the cheer and they were like no, we’re going to [keep doing it], this is still important.”

She added: “That was about three weeks ago. And the numbers are coming back up.”

So Poticha is still sounding the shofar and praying for the day when it does make sense to end the evening salute.

Asked when she might stop participating, the rabbi said she could not predict.

“The numbers are continuing to go up, frontline workers continue to be very stressed with what is happening,” she said, “and there are too many people not vaccinated.”