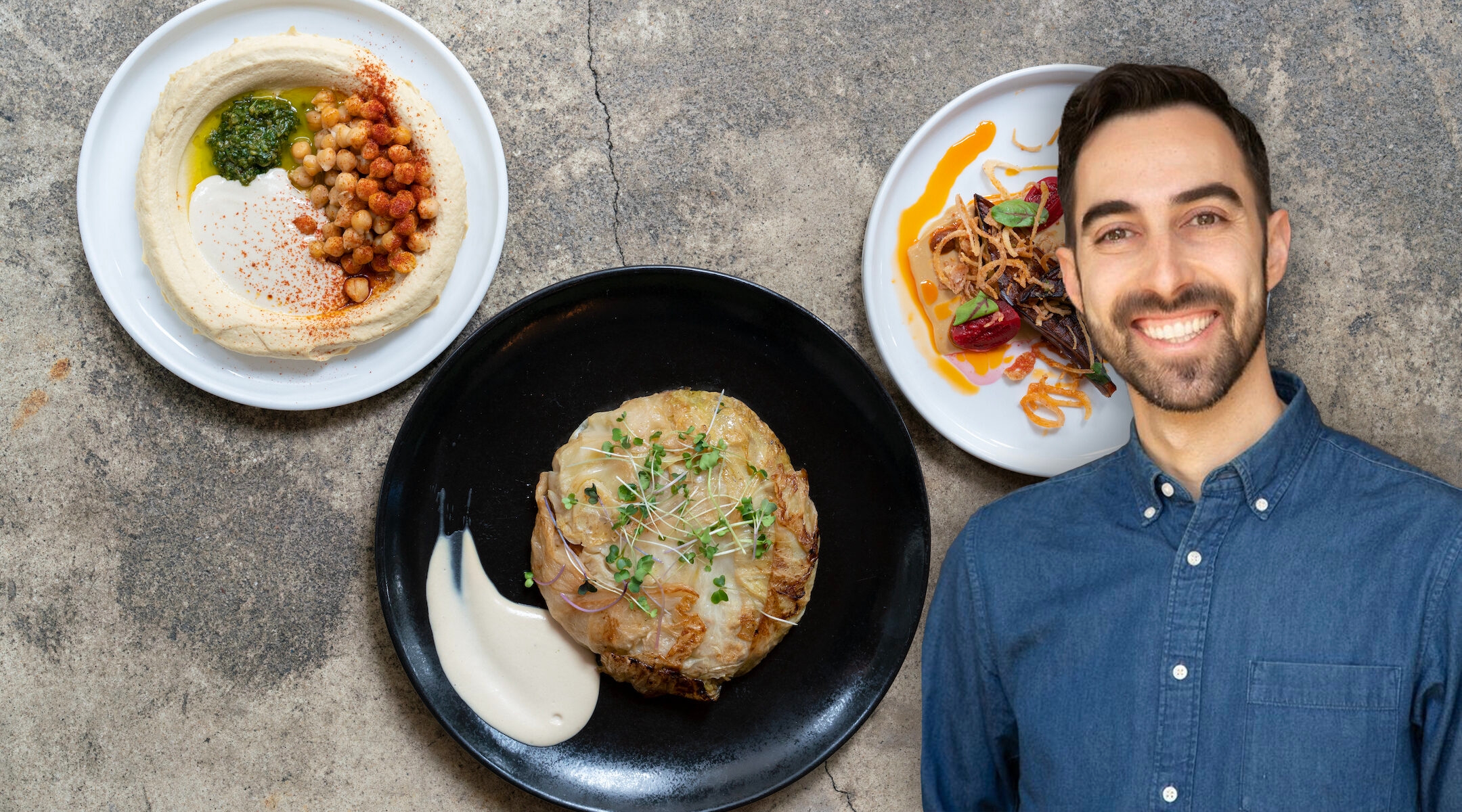 The food writer and entrepreneur is probably best known as the founder of Gefilteria, which sells artisanal gefilte fish, or as the blogger behind Pork Memoirs, a blog exploring taboos, Jewish and otherwise, surrounding the other white (and decidedly not vegan) meat.

But even with that omnivorous past Yoskowitz, 36, recently started Papaya, an online food delivery platform offering fully plant-based meals from top chefs at vegan and non-vegan restaurants. Collaborating with New York City restaurants, the website will feature weekly meal “drops”: a vegan meal prepared by different chefs will be delivered to your door.

The first drop features a meal by Einat Admony, the famed Israeli chef behind the Manhattan restaurant Balaboosta, to be delivered on July 29. The meal, which is meant to feed one “generously” or two for a light meal, costs $45.

While vegan food may sound like a far cry from the classics of Ashkenazi cuisine, like kugel (full of eggs), cholent (meat) and blintzes (milk, butter and cheese), Yoskowitz said vegetarianism has also had a historic role as part of Ashkenazi food culture.

For Yoskowitz, who lives in Brooklyn’s Crown Heights and frequently writes about traditional Ashkenazi foods, there’s almost always a historical connection to his food choices.

“Yes, I am Mr. Ashkenazi food,” Yoskowitz said. “But what you don’t know about me is that my grandmother was a vegetarian.”

His grandmother’s family was strictly vegetarian and spent summers at the Vegetarian Hotel (yes, that was its name) in the Catskills. Established by a Jewish family sometime before the 1920s, the hotel in upstate Sullivan County offered strictly vegetarian meals to a mostly Ashkenazi Jewish clientele.

And at one time, Yoskowitz points out, meat was a luxury for the average Jew.

“In the Ashkenazi tradition, it’s a special occasion food, and for holidays,” Yoskowitz said. “It was a very different story than we see in the Jewish deli today.”

For the first meal with Admony, Papaya customers will get a hummus plate, Asian sesame eggplant and a cabbage cake filled with freekeh, an ancient grain.

“Naturally, Balaboosta is doing a lot of dishes that may not be intended to be vegan or vegetarian, but they’re like that because that’s the type of cuisine,” said Admony, whose restaurant features Middle Eastern cuisine.

Yoskowitz sees his new project as part of a broader trend toward what he calls “plant-forward” eating. The target demographic for the project isn’t just vegans, it’s those who are interested in reducing their consumption of animal products but want to do so with creative meals. The project begins just a few months after Eleven Madison Park, a Michelin starred restaurant in Manhattan, announced it would forgo meat and seafood.

“We call them plant-curious eaters and people who are just trying to eat more plants, who are trying to maybe reduce the carbon footprints, who are just being thoughtful about some of their choices,” he said, counting himself among them.

Yoskowitz views Papaya as a way to challenge traditional restaurants to add more creative vegan options while spotlighting restaurants that are already vegan. He sees parallels between veganism and the kosher rules: Both are punctilious in describing what is and isn’t allowed.

“What we’re trying to do is showcase that within these constraints there are really creative ways of cooking and pushing cuisines forward,” he said. “Some of the really inventive Jewish dishes came about because of all of those constraints.”

For Rosh Hashanah, Yoskowitz plans to prepare a Papaya meal with his Gefilteria partner Liz Alpern and Libby Willis, the chef at  KIT in Crown Heights. While the menu is being kept under wraps, Yoskowitz said it would include challah (made without eggs), as well as dishes that incorporate mushrooms and fermented vegetables.

While he wouldn’t comment on the possibility of making a vegan gefilte fish, Yoskowitz said substitutes for animal products were not the point of Papaya.

“There’s one approach that’s ‘just make it a Beyond Burger or beyond something,’” he said. “And I’m trying to actually push beyond that and try to elevate the space.”