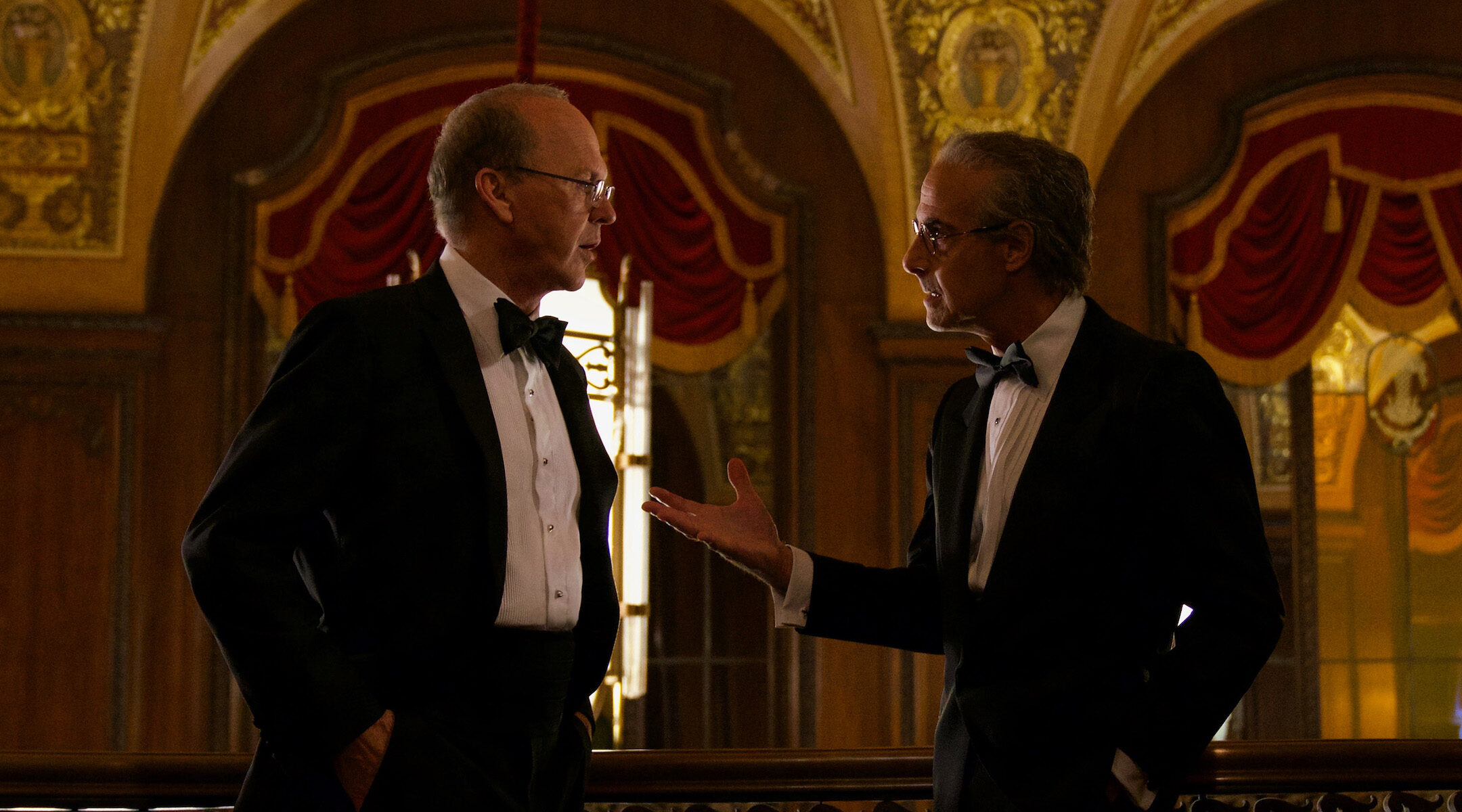 Michael Keaton, left, as Kenneth Feinberg and Stanley Tucci as Charles Wolf in the Netflix movie "Worth." (Monika Lek/Netflix)
Advertisement

(JTA) — At a key moment in the new Netflix film “Worth,” Kenneth Feinberg, the real-life architect of the compensation fund for 9/11 victims, is shown overwhelmed by the monumental emotional toil of the job.

At a town hall meeting for victims’ families Feinberg — whom Michael Keaton until this point has portrayed as an ultracompetent professional arbiter — is assailed by critics of the fund who see its calculations as too impersonal, its salve on their grief too pitiful. One stands up and angrily spits out that his fate is being decided by “some Jew lawyer.”

That moment is as close as the film’s Jewish screenwriter Max Borenstein, making a sharp departure from his usual gig writing the new “Godzilla” movies, and director Sara Colangelo (who also helmed the American remake of the dark Israeli drama “The Kindergarten Teacher”) get to discussing Feinberg’s Judaism. It’s a notable oversight, given that Feinberg himself, placed in the role of a real-life Solomon, told the Jewish Telegraphic Agency at the time that he had sought refuge from Jewish texts when putting the fund together.

Yet the film’s depiction of the attorney, who is aware that he is making judgments way outside his depth for people who at times actively despise his presence, still rings true to his own account. Midway through interviewing families of victims to determine compensation, Feinberg told JTA that he was questioning the very nature of his own profession.

“There is a problem in valuing life based on economic wherewithal,” he said at the time.

Such levels of doubt and introspection are occasionally glimpsed but rarely ruminated on in “Worth.” This is a somber, monochromal movie timed to the 20th anniversary of the terror attacks. It keeps us at a safe remove from the actual horrors of 9/11 while still asking us to process them on an intellectual level — much like how it shows Feinberg, a seasoned arbiter of compensation cases, witnessing the World Trade Center wreckage through the window of his commuter train.

Soon after the attacks, Feinberg is tapped to lead the fund by President George W. Bush’s attorney general, John Ashcroft, and is immediately ready for the challenge. He compiles an actuarial formula to objectively assign a dollar value to each life lost and devises a plan to get at least 80% of impacted families to agree to the fund. Feinberg is so confident in his mission that he insists he take on the work pro bono.

He’s confident, that is, until the families start pushing back and the hardened lawyer sees the error of his thinking. And there are other bits that question the worthiness of the entire project: For example, we learn the fund itself only came into existence because Congress wanted to protect the airline industry from being sued into the ground.

So what was Feinberg working toward? There are times watching “Worth,” even throughout the endless scenes of heart-wrenching family testimony being collected, when you legitimately don’t know whether he sees his purpose as noble or cynical.

Based on Feinberg’s own book “What Is Life Worth?,” the movie is produced by Higher Ground, Barack and Michelle Obama’s production company. And whether intentionally or not, it makes Feinberg out to be a kind of Jewish Obama: an intellectual Democrat handed an impossible task by Republicans who tries to reach diverse groups of people and is derided in public town halls. Also like Obama, Feinberg is accused of being aloof and unconnected to the struggles of real life; offers vague, noncommittal responses to direct questions; and must make no-win choices to reach imperfect compromises.

Because this strangely familiar character type is shown operating in the period from 2001 to 2003, the end of the fund’s signing deadline, the film has the odd effect of using Feinberg to depict the Bush era through an Obama-like moral calculus. It avoids the ugly racism of post-9/11 America and never once mentions war — bitterly ironic for a film set during America’s invasions of Iraq and Afghanistan and premiering this week, of all weeks, days after the U.S. military pullout from the latter. In “Worth,” grief alone rules the decisions. The families that Feinberg hopes to turn into claimants often don’t even want money, only a compassionate ear to hear their story.

By the end, Feinberg even gets to do something that Obama often fantasized about but rarely achieved: work with one of his biggest critics to reach a victory. That would-be adversary is George Wolf (played by Stanley Tucci), who lost his wife in the attacks and organized an effort to “fix” the compensation fund before ultimately siding with Feinberg to declare “The fund is fixed.”

In between, Feinberg and Wolf hold respectful disagreements and chat cordially when they bump into each other at the opera. It’s a vision of injured Americans coming together that, despite its basis in the historical record, can’t help but ring a little hollow 20 years on.

Since 9/11, Feinberg has applied his considered, humanistic approach to victim compensation to many successive American tragedies, including the Tree of Life synagogue shooting in Pittsburgh. It’s work that will continue to strike many of the affected as essential and others as superfluous, even damaging to victims’ memories. The central Talmudic question governing Feinberg’s life — “What is a life worth?” — remains an ongoing project.