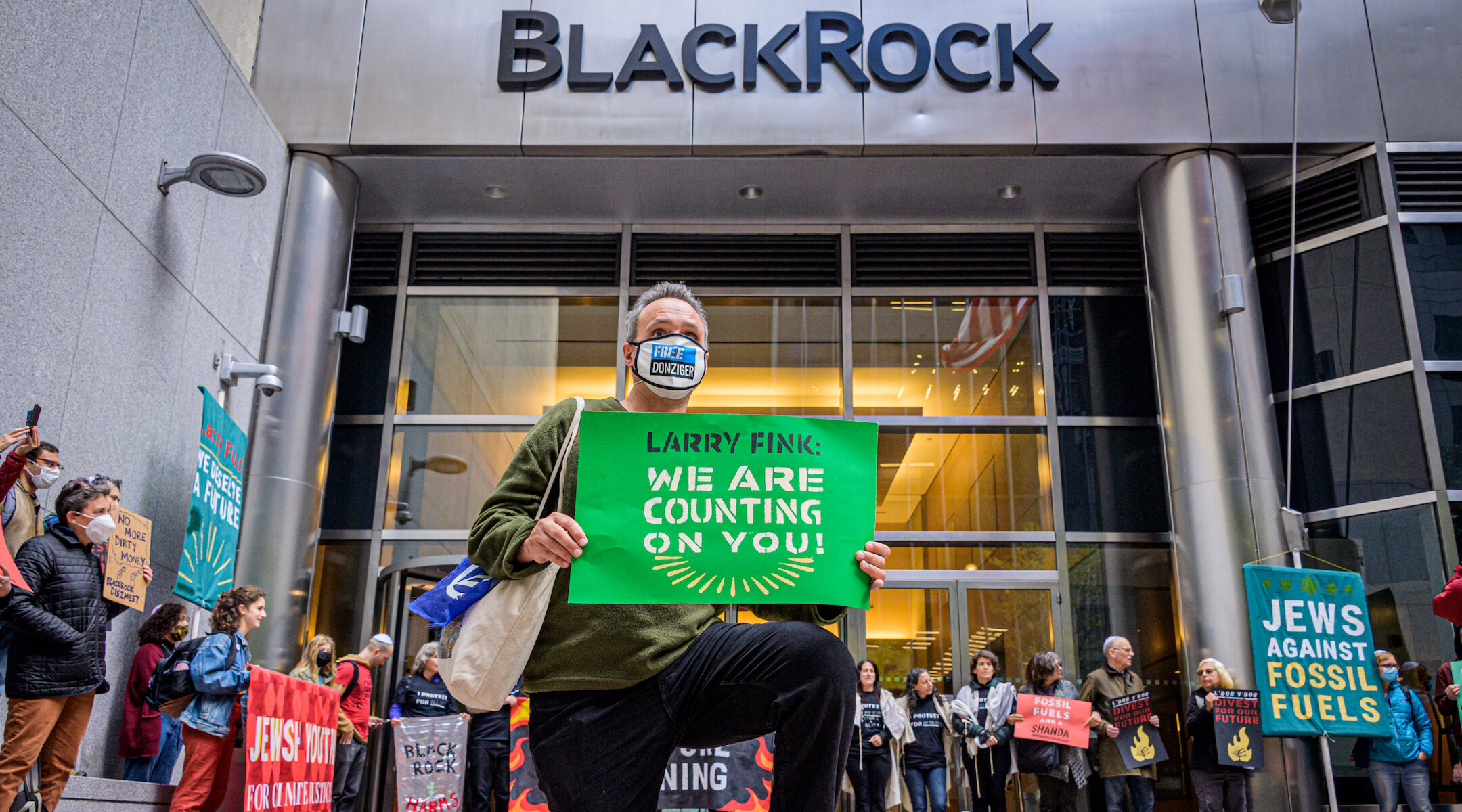 NEW YORK (JTA) — Three rabbis and six Jewish teenagers were among those arrested Monday at a climate protest at the Manhattan headquarters of BlackRock, the largest investment management company in New York.

The demonstration, organized by the Jewish Youth Climate Movement with support from the interfaith organization GreenFaith, demanded the firm stop its investments in and cut ties with companies that fund the fossil fuel industry, which include Enbridge, Inc., Formosa Plastics and Shell.

Rabbis Rachel Timoner and Stephanie Kolin of Congregation Beth Elohim in Park Slope, Brooklyn, and Rabbi Rachel Kahn-Troster, vice president of the Interfaith Center on Corporate Responsibility, were among those arrested.

“Judaism’s highest priority is saving lives,” said Timoner in a statement. “The Jewish youth who are leading us today understand that we are in a life or death moment, that we must divest from fossil fuels now in order to save lives.”

The Jewish Youth Climate Movement, founded by the Jewish environmental group Hazon in 2019, is a Gen Z-led movement dedicated to combating climate change and environmental injustice from a Jewish lens.

The demonstration was one of 500 demonstrations across 41 countries taking place over Oct. 17-18 as part of the “Faiths 4 Climate Justice” campaign organized by Greenfaith. The campaign was set for two weeks ahead of the United Nations Climate Change Conference (COP26), which will take place in Glasgow, Scotland, starting on Oct. 31.

The activists specifically called on Larry Fink, BlackRock’s founder and CEO since 1988, “to stand by his Jewish values and end BlackRock’s funding of the fossil fuel industry and end human rights violations,” according to a news press release.

“BlackRock is the biggest funder of climate destruction in the world. It’s time for Larry Fink to live up to his talk and divest from the fossil fuel industry and end BlackRock’s human rights violations,” said Morgan Long, one of the organizers of the event.

Fink, in a 2021 “Letter to CEOs,” said BlackRock was taking steps to ensure that the companies its clients are invested in “are both mitigating climate risk and considering the opportunities presented by the net zero transition,” that is, emitting no more carbon dioxide than they remove from the atmosphere by 2050.