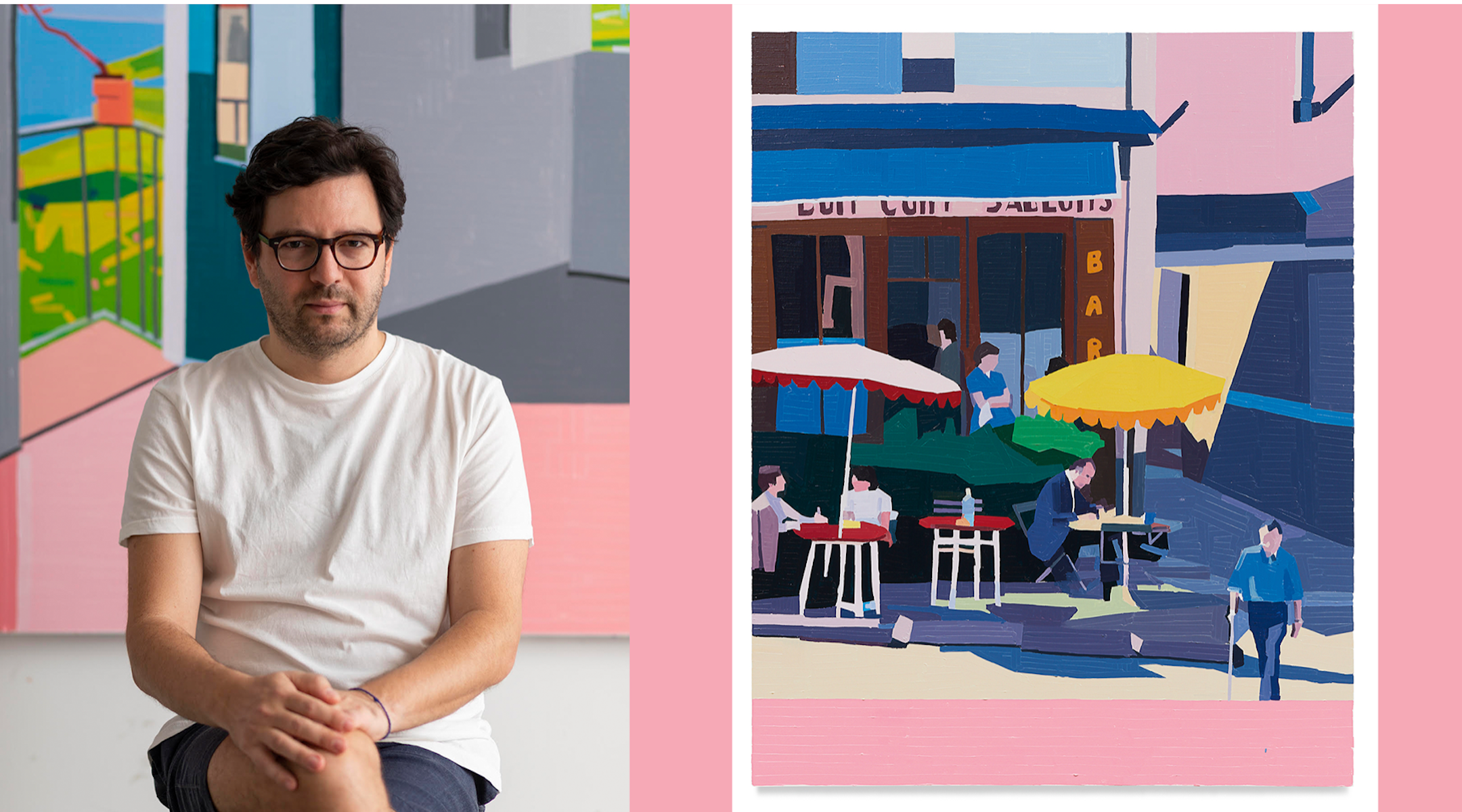 Artist Guy Yanai, left, painted 15 out of 20 of the paintings for this exhibit from his studio in Marseilles, but he splits his time between there and Tel Aviv. At right is "The Letter," 2021. (Courtesy of the artist and Miles McEnery Gallery)
Advertisement

(New York Jewish Week via JTA) — On his recent trip to New York, Israeli artist Guy Yanai felt that the city was the most aggressive it’s ever been in the 20 years he’d been visiting, since he studied art here at Parsons School of Design. He’d forgotten how big the cars are, how fast they drove, how loud their music was.

“Coming back to Tel Aviv felt like visiting a Swiss village,” he said. “There’s no respite in New York. I had forgotten that.”

Yanai was in New York to open “The Things of Life,” his second solo exhibition at the Miles McEnery Gallery on W. 22nd St. in Chelsea. The 20 paintings in the show are bright, colorful and deceptively simple snapshots: a couple embracing in front of their car, sailboats on the water, a man writing a letter in front of a cafe.

The paintings “speak to moments of heartbreak and tragedy, but also to unbridled intimacy, evoking a nostalgia for what was perhaps lost during the lonely months of lockdown,” writes Terrence Trouillot in an essay that accompanies the exhibit.

The show takes inspiration from the movie with which it shares its name, Claude Sautet’s “Les Choses de la Vie” (1970), which follows a man on the last day of his life. He debates whether to end things with his mistress or leave his wife, and visits his son and his father before (spoiler alert) getting into a car accident and dying.

Maybe that’s why Yanai has big, fast cars on his mind.

“I really resonated with this man,” said Yanai. “It’s the last day of his life, and we see him visit his lover, wife, father, son and workplace. Everything is pulling him in different directions, all the demands of his life.”

Many of the paintings in the show are recreations of stills from the movie. They  capture the intensity and beauty of the simple acts that create a life and that can disappear so quickly. 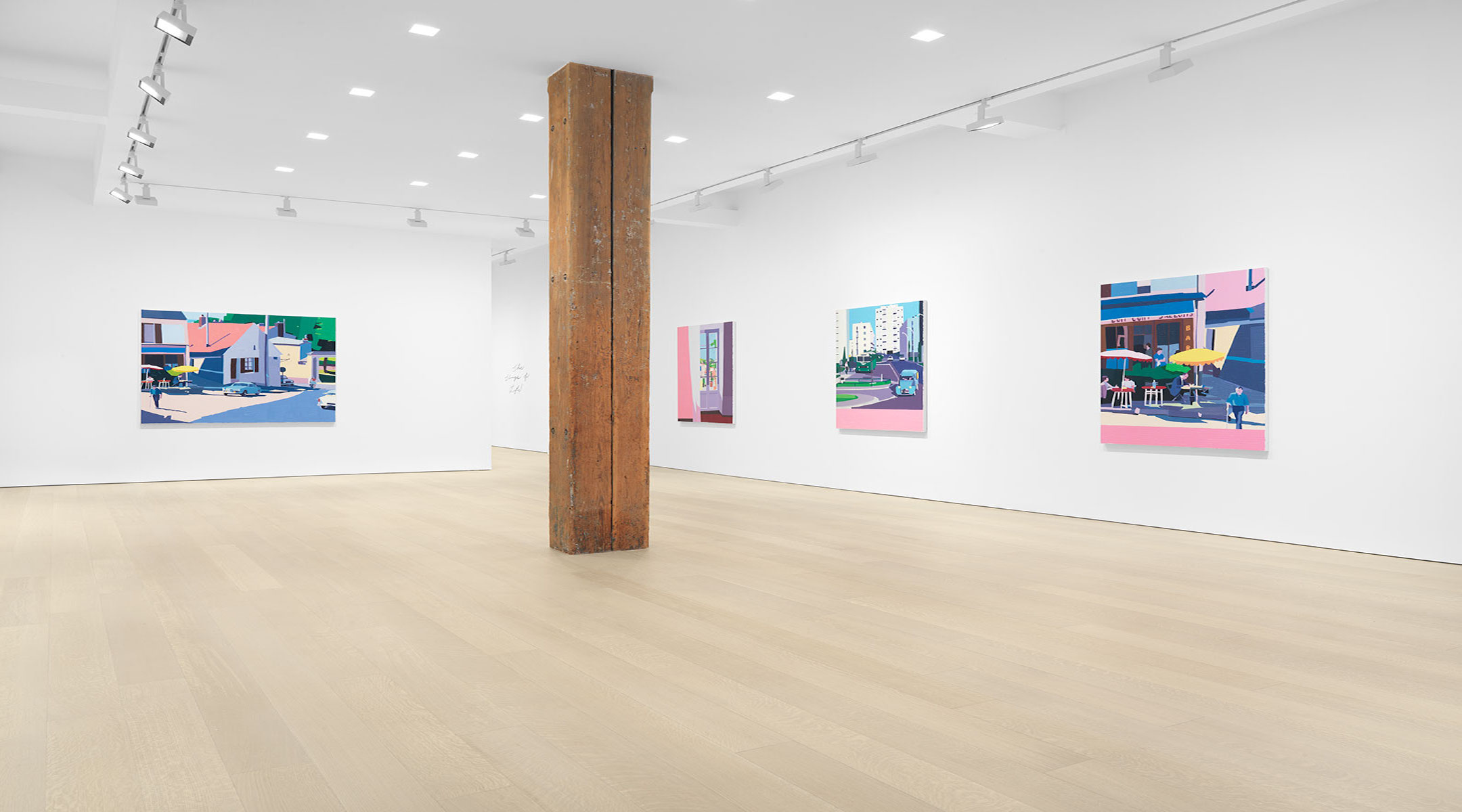 “I love the title, ‘The Things of Life,’” Yanai said. “The older I get, the more difficult the day to day of life becomes. I don’t know how people paint the big issues in their work. I can’t even get beyond breakfast.”

Yanai, 44, recently opened a studio in Marseilles, France, where his wife is from. For the first time, the majority of his work for an exhibit was painted in France instead of in his home studio in Tel Aviv.

“The show felt very French to me, at the end. It bothers me a little,” he said.

Yanai is resistant to being associated with any one particular region. Not France, not Sicily — where he goes on vacation every August — and not Israel, where he mostly lives and works. He does not want to be labeled an Israeli artist, or even a Jewish one, even though he is a self-described “extremely proud Israeli and extremely proud Jew.” To be called an “Israeli” artist or a “French” artist, he explained, “it’s like putting a certain spice on a food and then it becomes the only thing you taste.”

Born in Haifa, Yanai moved with his family to the Boston suburbs when he was seven years old. He attended Parsons School of Design, The New York Studio School, Pont-Aven School of Art and Hampshire College, where he completed a BFA in 2000. Yanai has had two dozen solo exhibitions, and his work has appeared in many group exhibitions around the world.

“The Things of Life” marks the first time Yanai has showcased paintings that put human figures front and center; his previous shows feature plants and landscapes.

But while in the first COVID lockdown, he felt a massive change in what he was doing with his art.

“For the first two weeks, I thought art was over. I sat in bed and didn’t paint. I felt like, ‘That’s it, there’s no more art,’” he explained. But it was those thoughts that allowed him more freedom to paint whatever he wanted, even if it felt irrelevant or imperfect. At the beginning, Yanai painted screenshots of Zoom calls and online lectures. “I didn’t even realize what I was doing until after,” he said. “And I don’t know if I could do it again.”

Combatting the pandemic, for Yanai, meant embracing his idea of artistic freedom. “I got into art for a specific reason, to do whatever I want. A freedom to create what you want, to challenge yourself and go different places.” The movies he watched during lockdown reminded him of that, and let him explore more figurative, narrative, and emotional portraits.

“The Things of Life” is showing at Miles McEnery Gallery until Nov. 27.