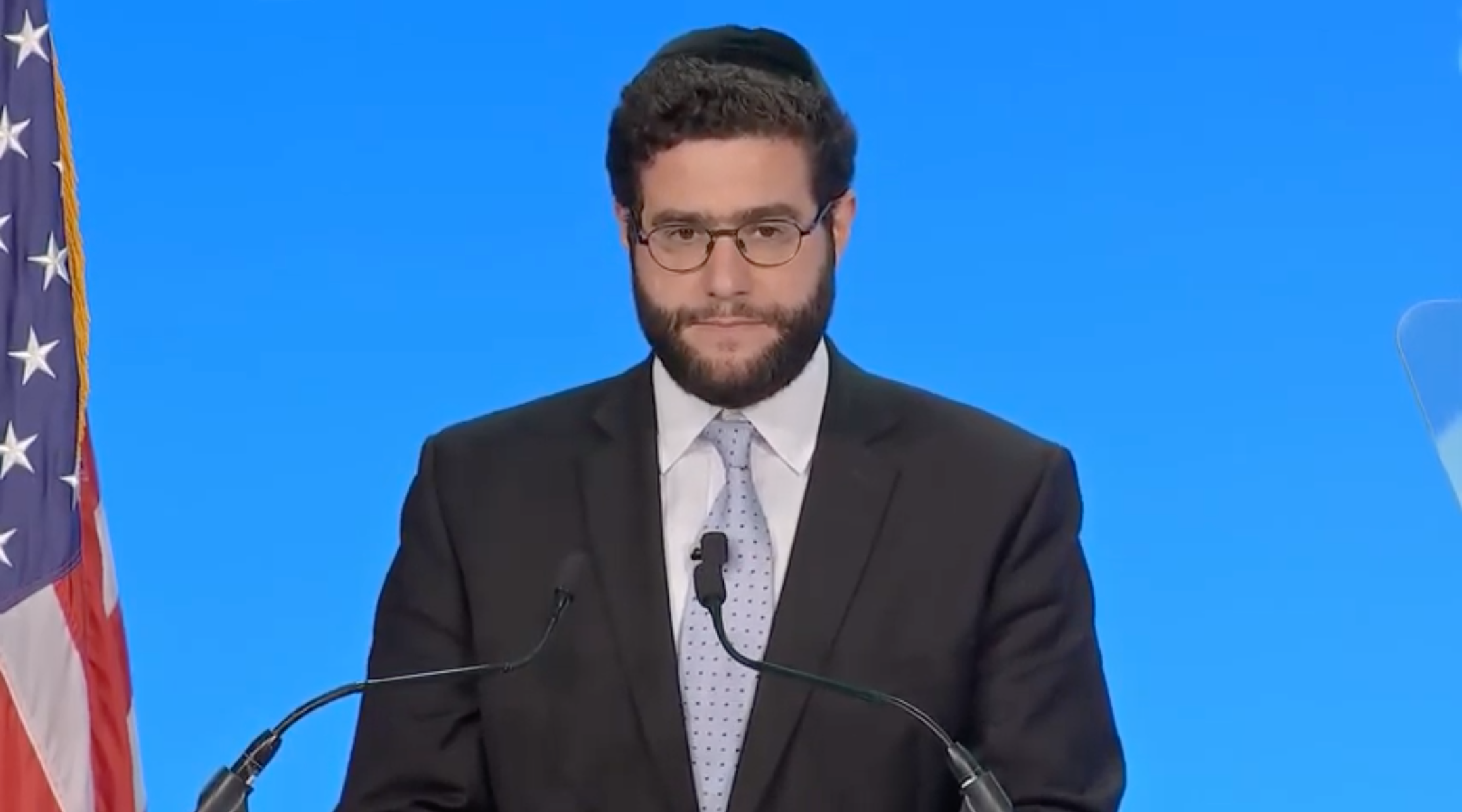 Rabbi Benjamin Goldschmidt, 34, had been working for Park East Synagogue for a decade. (Screenshot from YouTube)
Advertisement

NEW YORK (JTA) — In his first public comments since being fired from Park East Synagogue two weeks ago, Rabbi Benjamin Goldschmidt defended himself against charges of an “insurrection” and illegal activity and raised concerns about his former congregation’s future.

Goldschmidt was abruptly fired from Park East, the wealthy Orthodox synagogue on Manhattan’s Upper East Side, by the congregation’s senior rabbi, Arthur Schneier. Schneier’s allies accused Goldschmidt of inappropriately sharing synagogue members’ email addresses and of orchestrating a coup to replace Schneier, 91, who has led the synagogue for nearly 60 years.

Goldschmidt, 34, had been at the synagogue for a decade.

In an email to Park East members sent Friday afternoon, shortly before the onset of Shabbat, Goldschmidt rebuffed the accusations against him. Claims that he acted inappropriately by giving members the email list, he wrote, were false. Nor did he seek to depose Schneier, he wrote.

He referred to an email sent by four synagogue members to the congregation on Oct. 8. The signatories had written, “we are concerned about the state of our beloved synagogue and what the future holds.”

Goldschmidt wrote in his letter Friday that that email “was not designed to hurt Rabbi Schneier; it was merely a jumping-off point to discuss the future of Park East.”

“Given these public attacks, I feel that I have no choice but to defend not just my reputation, but also the reputations of the signatories of the October 8th email,” Goldschmidt wrote. “The charge leveled against me that I led an ‘insurrection’ to remove Rabbi Schneier is completely unfounded, and personally hurtful given my ten years of loyal service to the Rabbi and the Synagogue.”

READ MORE: A world-famous rabbi, a popular assistant and a succession crisis: Inside the rupture at Park East Synagogue

Goldschmidt also denied a previously unreported accusation, which he dubbed a “wild conspiracy theory,” that younger members of the synagogue planned to sell the synagogue’s real estate. And he shot back at allegations that the signatories to the email weren’t heavily involved in the synagogue.

“Each one of those signatories is a blessing in his own right for our community; they are role models and leaders, committed to community, Torah, and continuity,” he wrote. “Their only motive was to help build a growing, thriving, vibrant, and young community.”

Goldschmidt also echoed concerns about the future of the synagogue in his Friday email, though like the signatories of the Oct. 8 email, he didn’t elaborate.

“For a while, there has been concern over a lack of engagement with young people, the synagogue’s financial situation, and an absence of transparency between leadership and membership,” he wrote. “To begin to rectify the situation, some members took it upon themselves to communicate and start a conversation.”

Hank Sheinkopf, a veteran political consultant who has acted as a spokesperson for the Schneier family, rejected Goldschmidt’s narrative.

“This is his attempt to explain away his insubordination and the use of confidential synagogue information to support himself and the disruption and insurrection he created,” Sheinkopf told JTA Friday afternoon, adding that the email was “dropped right before Shabbat so no one can respond, which shows you that this is an orchestrated, well-thought-through public relations campaign to support his efforts.”

Goldschmidt wrote that the man who fired him “deserves every accolade and commendation.” But later, he wrote that his ultimate responsibility is not to Schneier.

“One important thing I have learned from my dear parents and my years in the Rabbinate is that a rabbi works for the members of his shul,” Goldschmidt wrote. “He does not merely work for a senior rabbi, the synagogue president, or the board. It is you, the membership, that I serve and have tried my best for ten years.”

Goldschmidt did not detail any future plans beyond vowing to continue working in New York City. But he called on his readers to remain at Park East.

“I hope to continue serving our beloved Jewish community in New York City one way or another,” he wrote. “More importantly, I care a great deal about the future of Park East. I hope that you — its members — will remain engaged with the shul to ensure it is a place that is warm and welcoming, one that understands your spiritual needs as Jews and your desires to have your concerns heard and acted upon.”