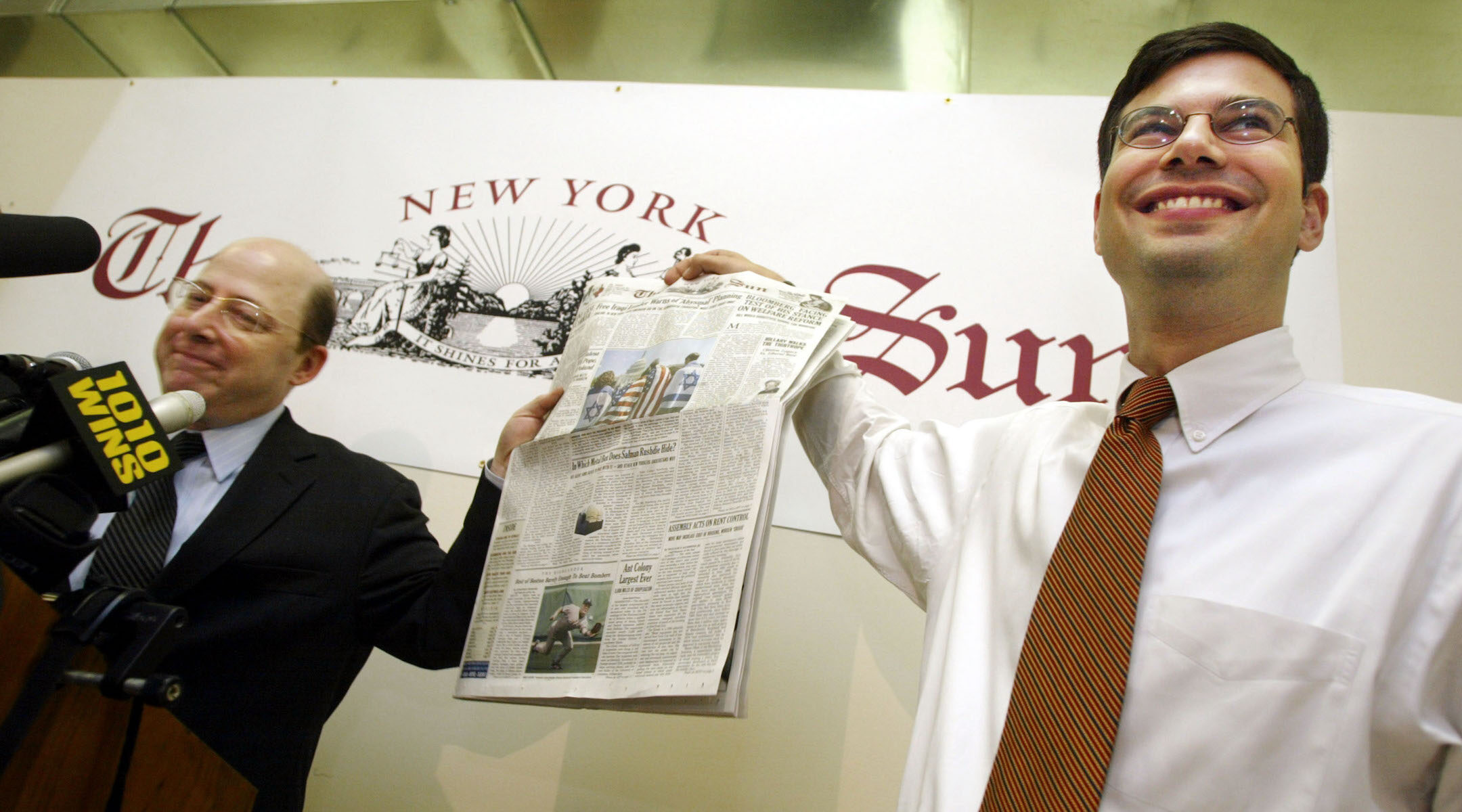 Seth Lipsky, left, then editor and publisher of The New York Sun, holds up a copy of the first issue with Ira Stoll, vice president and managing editor, during a news conference Apr. 16, 2002 in New York City. The paper is being relaunched online after its purchase by Dovid Efune, the former CEO and editor in chief of the New York-based Algemeiner Journal. (Mario Tama/Getty Images)
Advertisement

(JTA) — The New York Sun, a New York City broadsheet published from 2002 to 2008, will relaunch its web site after a sale to a former editor of The Algemeiner Journal, a Jewish publication with a conservative bent, The New York Times reported Wednesday.

Seth Lipsky, who ran the New York Sun in its previous run and has continued to publish his and others’ opinion pieces on the Sun’s modest web site in the years since, sold the publication in an undisclosed cash and stock deal to Dovid Efune, until recently the top editor at the Algemeiner.

In a deal announced Wednesday, Lipsky will continue to serve as editor and will hire a new staff of writers. Efune will serve as publisher and chairman. The New York Sun’s Twitter account put out a call for applications in a tweet early Thursday morning.

Meanwhile, Algemeiner announced that Efune is joining its executive board, and would provide “oversight and leadership of the Algemeiner’s editorial and fundraising departments.”

In an email interview with The New York Times, Efune said he admired the Sun for “practicing precisely the form of journalism that’s so lacking in today’s media environment: values-based, principled and constitutionalist.” Lipsky told The Times that the revamped Sun would support “the American values of constitutionalism, equality under the law, and individual liberty.”

Efune has served as editor-in-chief and CEO of the Algemeiner since 2008, when he oversaw the paper’s relaunch as an English language paper. The Algemeiner was started in 1972 as a Yiddish-language weekly. Last month he was honored at an Algemeiner gala but his plans for leaving were not announced.

Before starting the Sun in 2002, Lipsky served as editor-in-chief of the Forward beginning in 1990. Lipsky, a neoconservative, was forced out of that role in 2000 reportedly due to his political differences with the board, which replaced Lipsky with J.J. Goldberg, whose liberal leanings were more in line with those of the Forward’s socialist roots.

In its first iteration in the early 2000s, the Sun was known for its conservative leanings and has continued in that vein in recent years, publishing opinion pieces by a roster of conservatives.