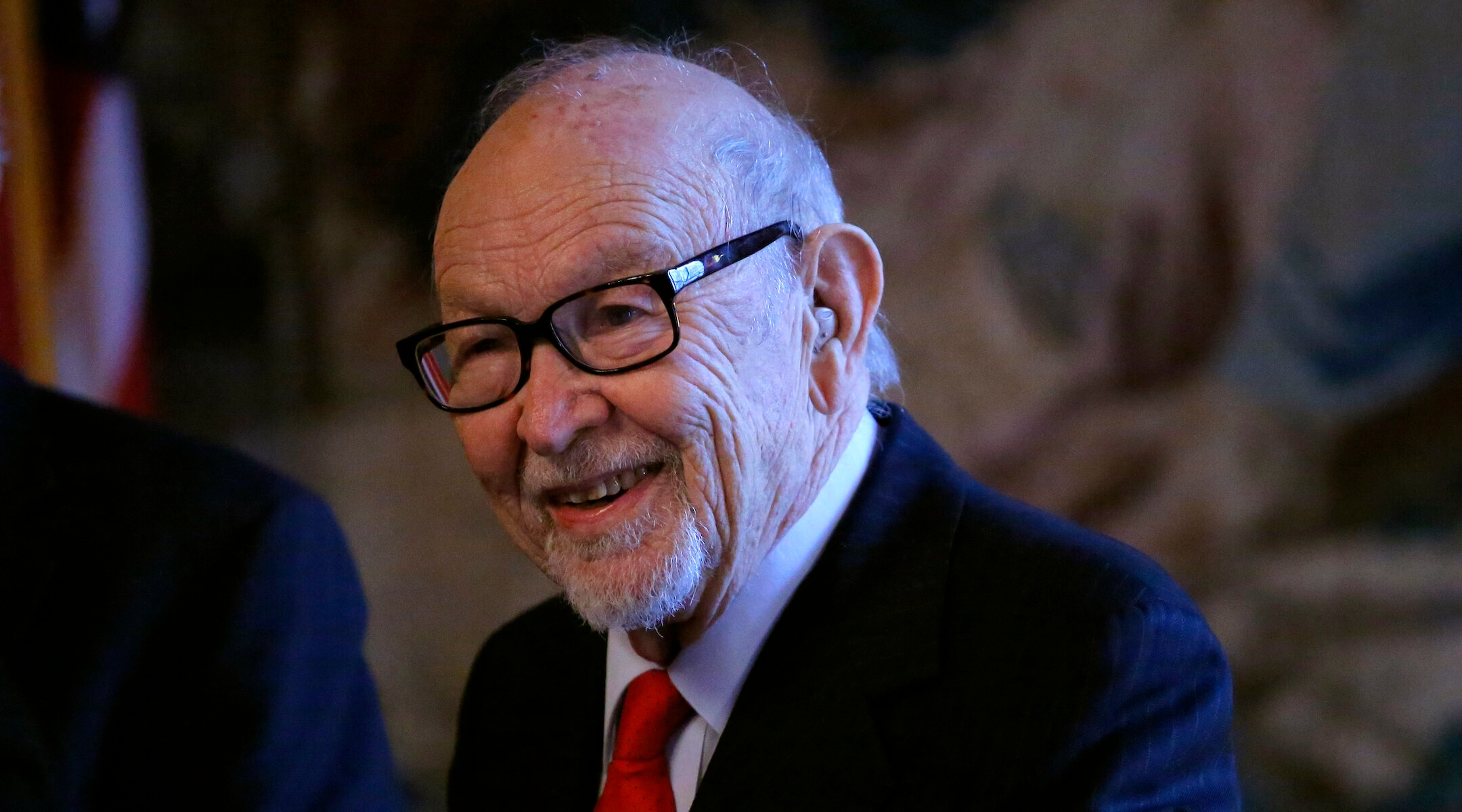 Justus Rosenberg attends an interview before receiving the award of the French Legion of Honor medal from French ambassador to the United States Gerard Araud at the French Consulate, Mar. 30, 2017 in New York. (Kena Betancur/AFP via Getty Images)
Advertisement

(JTA) — Justus Rosenberg, a professor whose long career teaching literature was preceded by a remarkable tenure in the French resistance during World War II, died last month at the age of 100.

Rosenberg was a professor at Bard College in Annandale-on-Hudson, New York for decades where he taught literature and languages, including German, French, Yiddish, Russian and his native language, Polish. It wasn’t until he was in his mid-70s that he began to speak about his experiences during the Holocaust, when, as a Polish-Jewish refugee in Paris, he worked as a courier for a rescue effort led by the American journalist Varian Fry to save intellectuals, writers and artists stuck under Nazi rule.

Even Rosenberg’s wife Karin, who he first met in the 1980s, was unaware of her husband’s heroic past until 1998. “I believe he was a hero. But he did not think of himself as a hero. To him, he was just doing what needed to be done,” Karin told The New York Times.

Rosenberg was born in Danzig, Poland in 1921 to a well-off Jewish family that was not particularly religious. After being forced out of school as a teenager due to new laws barring Jews from the schools, his parents sent him to Paris to continue his studies. When the Nazis invaded Poland in 1939, Rosenberg lost all contact with his parents and sister, who he would only learn had survived after the war ended. He was finally reunited with them in 1952 when they made their way to Israel.

When the Nazis took over Paris, Rosenberg fled to Toulouse where he met a woman who recruited him to join Varian Fry’s Emergency Rescue Committee-sponsored rescue effort in Marseille. Rosenberg, who was blonde, appeared younger than his age and spoke French, worked as a courier for Fry, ferrying forged documents and accompanying some refugees across the border to Spain. The rescue effort saved about 2,000 people, among them the writers Hannah Arendt and Heinrich Mann and artists Marc Chagall and Marcel Duchamp.

When Fry’s efforts ended in 1941, Rosenberg, himself a refugee, was on his own again and was soon sent to a prison camp outside Lyon. When he learned that his fate and that of the other prisoners was to be sent to a labor camp in Poland, Rosenberg feigned an illness that would get him sent to a hospital. But even after having his appendix removed due to his nonexistent illness, Rosenberg was still slated to be sent to the camp. Devising a new plan, he sent a message to a group of priests that worked with the Resistance who brought him a bundle of clothing and a bicycle, which Rosenberg used to escape before he had recovered from surgery. After his recovery, Rosenberg joined the French Resistance and later worked as a guide for the American Army.

He described his wartime experiences in a 2020 memoir, “The Art of Resistance: My Four Years in the French Underground.”

After the war, Rosenberg continued his studies in Paris before immigrating to the United States in 1946. He earned his PhD at the University of Cincinnati and went on to teach literature at several schools before settling at Bard College in 1962. During his years in Cincinnati, he supplemented the meager Jewish education he received as a child by conducting his own study at the Hebrew Union College’s library.

He continued to teach literature classes at Bard after his official retirement in 1992 until his death and was buried at the Bard College Cemetery. Bard College president Leon Botstein wrote of Rosenberg’s love of teaching in a letter to the Bard community.

“For Justus, learning and study were instruments of redemption, remembrance, and reconciliation. He possessed a magnetic capacity to inspire the love of learning,” Botstein wrote.

Rosenberg and his wife established the Justus and Karin Rosenberg Foundation in 2011 to fight hate and antisemitism. In 2018, the foundation endowed the Bard Center for the Study of Hate. The foundation also supported the YIVO Institute for Jewish Research and the National Yiddish Theatre Folksbiene.

In 2017, Rosenberg was honored as a Commandeur in the Légion d’Honneur by the French ambassador to the United States in recognition of his work with the French Resistance.

Speaking to the New York Jewish Week in 2016, Rosenberg said his survival during World War II was “bashert.”

“It was a fortuitous twist of fate,” he explained.

Even so, he didn’t consider his work for Fry particularly worthy of note.

“I didn’t consider it particularly heroic,” he told the Jewish Week. “It was just part of my life. I regret that we did it for only a limited amount of people. There were so many people who did much more and were much more heroic.”