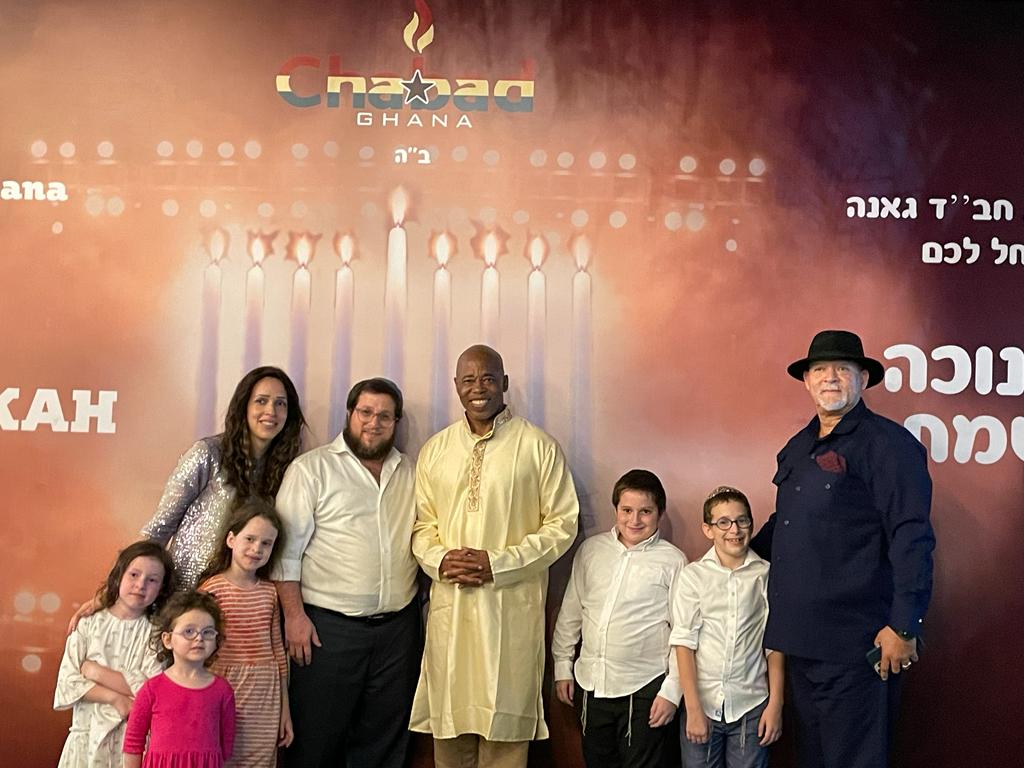 (New York Jewish Week via JTA) — Eric Adams told reporters he planned to engage in “some spiritual cleansing” during a trip to Ghana this week. Still, the appearance of New York City’s mayor-elect at a Hanukkah party Wednesday in Accra came as a surprise.

Adams joined Rabbi Noach Majesky, a Brooklyn expat who is Chabad’s emissary in Ghana, onstage for an event to celebrate the fourth night of Hanukkah, according to a video distributed by the Orthodox movement’s headquarters.

It was at least the second Hanukkah celebration with Chabad this year for Adams, the favored mayoral candidate for much of New York’s Orthodox communities. (He has vowed to go out every night as mayor, to demonstrate that the city is thriving despite the ongoing pandemic.)

On Sunday night, he joined Chabad in Midtown Manhattan to light the menorah the movement has erected there, which it bills as the largest in the world. There, he praised Menachem Mendel Schneerson, the late rabbi who led the Chabad movement, known among his adherents as the Rebbe.

“As a member of the Brooklyn community, and the rich Crown Heights community, we know what the Rebbe did for all of us and how he spread the importance of Hanukkah, and the celebrations that we are seeing all over the world now,” Adams said from a cherry picker at the top of the 36-foot menorah.

The menorah in Accra was more modest, but Adams was just as lavish in his praise for Schneerson and those, such as Majesky, who have moved all over the world to advance his message.

“My ancestors left these shores in slavery. I came back to Africa with the mayoral team. It is because no matter what pain we experience we must turn our pain into purpose. Nothing personified that more than the Grand Rebbe in Crown Heights,” Adams said, to applause from the assembled crowd.

Adams added, “He told the men and women of his community to go out across the globe and open Chabad houses and spread the energy and spirit of Judaism. We are looking at the seeds that he planted.”

Majesky and his wife, Altie, along with their children, moved to Accra in 2015. There, they serve a tiny community of local Jews, largely Israeli businesspeople and their families, according to an article published by Chabad.org.

Majesky’s brother, Berel Majesky, is a major figure in Crown Heights as the founding director of the Friendship Circle Brooklyn, a nonprofit associated with the Jewish Children’s Museum that supports children with special needs.

Adams heard about the local event through his New York City relationships, according to Yaacov Behrman, who does public relations for the Chabad-Lubavitch headquarters in Brooklyn and who distributed the video.

“He heard about Chabad’s event, led by a Crown Heights rabbi, and was happy to participate,” Behrman told the New York Jewish Week. “The mayor-elect has been a friend to Chabad, and the Lubavitch community in Crown Heights for over 10 years.”

In Accra, Adams told the partygoers that he had come to the country to “close the open wound of slavery and reconnect with ancestors,” adding that he knows that Jews, too, have open wounds inflicted by history. But he said it is possible to overcome division and trauma.

“We’re going to show that we’re members of the greatest race alive, and that’s the human race. Let’s make sure it’s a safe Hanukkah for our families and the children and for humanity,” Adams said. “I’m happy to be here in Ghana with you showing how great we are as a people.”

The mayor-elect is set to return to New York on Dec. 8.