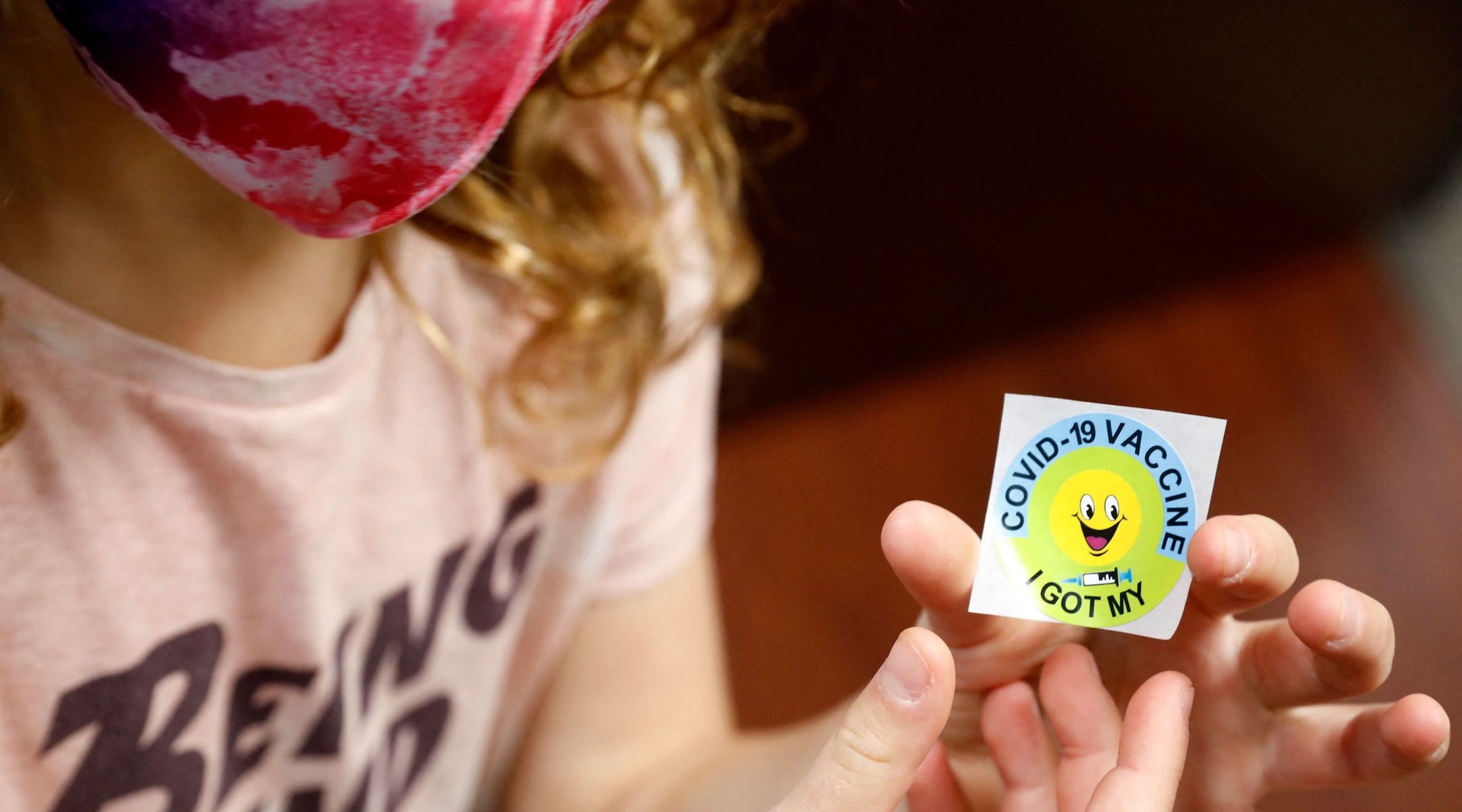 A child holds a sticker she received after getting a COVID-19 vaccine in Novi, Mich., Nov. 3, 2021. (Jeff Kowalsky/AFP via Getty Images)
Advertisement

(JTA and New York Jewish Week) — The morning after the Centers for Disease Control recommended a COVID-19 vaccine for children 5 and older, the Abraham Joshua Heschel School on Manhattan’s Upper West Side had news for parents.

By Feb. 1, 2022, the school announced, all children eligible for the vaccine must be fully vaccinated. “Heschel’s policy has been and remains that all eligible members of our in-school community must be vaccinated against Covid-19,” wrote Head of School Ariela Dubler in an email to parents.

Ten miles away in the Riverdale section of the Bronx, the administration at another Jewish school, Kinneret Day School, waited longer before communicating with families about the new vaccines — then delivered a somewhat different message.

“We strongly encourage parents to vaccinate their children,” the school’s top three administrators wrote in an email to parents, underlining that sentence for emphasis. But, they added, “until the FDA gives long-term approval for the vaccination we will stop short of a full mandate.”

The contrasting approaches to the new vaccines come nearly a year after vaccines for adults first became available and after more than 18 months of vexing pandemic-related decisions for Jewish schools.

Children are required to be vaccinated against a host of diseases to attend schools all over the country. But state health authorities haven’t yet added COVID-19 vaccines to the list, leaving it largely up to individual public school districts and private schools to make the call. Many public health experts say it’s not yet the time for sweeping mandates, citing the fact that vaccine adoption is historically most effective when people are first given a chance to opt in.

“In the next three to six months, encouraging a self-directed push to get people to vaccinate their kids is probably what will help it to not be so ‘line in the sand,’” Dr. Stella Safo, who runs a New York City-based health care company called Just Equity for Health, told NPR last month.

American Jews may need less of a push than others. They had the least COVID-19 vaccine hesitancy of any religious group in the United States according to a July survey by the Public Religion Research Institute. And in the days surrounding the pediatric vaccine’s approval last month, Jewish parents posted online about how they eagerly anticipated their children’s inoculations — and even prepared prayers to accompany them.

Capitalizing on that excitement, Jewish institutions across the country, including day schools, were some of the first to arrange on-site vaccine clinics and photo opportunities.

Jennifer Rak, whose children are in second and sixth grade at Heschel, said she felt a mixture of relief, excitement and hope when she took her kids to get vaccinated at the school’s pop-up site.

“I’m so grateful that they have this mandate,” she said.

At Beit Rabban Day School in Manhattan, students could get their first shot on site Nov. 14 during an event in which teachers helped children say Shehechiyanu, the blessing recited upon reaching a new milestone, as they received their shots. Afterwards, kids were treated to a rooftop party with cupcakes and an art station where they could make their own pom pom coronaviruses.

“It was celebratory and beautiful,” Stephanie Ives, Beit Rabban’s head of school, said of the vaccine drive. “The children felt so comforted to be vaccinated at school, where they feel at home, especially seeing their teachers there to cheer them on.”

Beit Rabban’s policy is that all students and staff must be vaccinated against COVID-19 within 60 days of their eligibility.

Not all Jewish day school parents are rushing to get their children vaccinated; parents in two different states told JTA that they knew about a family leaving their children’s school over vaccination expectations. The landscape is particularly different in Orthodox communities, which tend to be more right-wing and where misinformation about the pandemic, including false claims about the vaccines’ effect on fertility, has spread widely.

Vaccination rates in many haredi Orthodox neighborhoods remain among the lowest in New York City, and when the city recently mandated vaccines for all employees at private schools, including yeshivas, haredi Orthodox leaders immediately objected. Parents at yeshivas, which have not widely enforced masking or distancing and in some cases operated in person when that was barred, say they have had no communication at all about COVID-19 vaccines for their children.

Blimi Marcus, a nurse in Brooklyn who has been outspoken about the need for her Orthodox community to take greater precautions against the virus, said her own children’s schools had not communicated anything related to the pediatric vaccines, and she hadn’t heard of any other schools that had.

“I’d be surprised to hear if they did,” Marcus said.

Across the country, a few non-Orthodox schools schools are setting hard and fast vaccine requirements. Like Heschel in New York City, Milton Gottesman Jewish Day School of the Nation’s Capital is requiring children to be vaccinated by Jan. 31; that’s the school attended by the children of Jared Kushner and Ivanka Trump until late last year, when the family withdrew amid tension over its noncompliance with COVID-19 guidelines.

But other schools that have expressed excitement about the vaccines aren’t yet requiring vaccination as a condition of enrollment — or have signaled that they may not in the near future.

At Hannah Senesh Community Day School, a nondenominational school in the Carroll Gardens neighborhood of Brooklyn, administrators have said vaccines will be required for children — but they have not yet set a vaccination deadline.

A post shared by Luria Academy of Brooklyn (@luriaacademy)

Two miles away, Luria Academy, a nondenominational school in Prospect Heights, held vaccine clinics on campus. But administrators there know that the school enrolls some families that are apprehensive or outright skeptical of the vaccines.

“As vaccines entered the world, the decisions about how to create health policies for the school became even more complex,” Head of School Amanda Pogany wrote to parents Nov. 5, after some squabbling on an independent listserv for Luria-associated families.

Pogany added, “We’ve worked hard to make the best decisions we can with the information we have, recognizing that, no matter which direction we choose on this complex topic, some members of our community will be impacted more than others, and some will not agree with Luria’s decision. This does not, nor will it ever mean, that we don’t want those people in our community.”

Kinneret outlined a typical approach in its letter to parents: Children who are fully vaccinated will no longer have to quarantine if they come in contact with someone who is positive for COVID-19. And children who are not vaccinated will have to present regular evidence of negative test results, undertaken on their own time.

Luria’s program of testing students in school this year will come to an end after the winter break; unvaccinated children will still have to test regularly outside of school. What’s more, the school told families, “because classes will be mixed for [after-school] clubs, unvaccinated students will not be able to participate.”

A parent at New York City’s Shefa School, which serves Jewish children with disabilities, said the stakes attached to the school’s decision around whether to require COVID-19 vaccines felt high.

“If you didn’t want to get a vaccine at Heschel, you could find another Jewish school in the city without a mandate,” said the parent, who asked for anonymity because of a personal policy against speaking on the record about her children. “It’s not the same for Shefa students.”

But she said she thought most families would choose vaccination regardless of what the school requires, both because they want to protect their children’s health and because they are ready for the life that vaccination promises, so long as another wave or variant of COVID-19 doesn’t upend everything yet again.

“It’s not having to quarantine, it’s being able to travel and see family in Israel,” she said. “​​It gives the kids so much more freedom.” 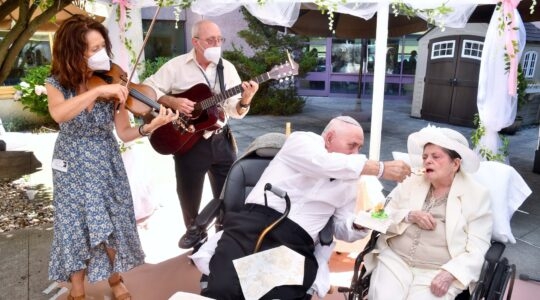