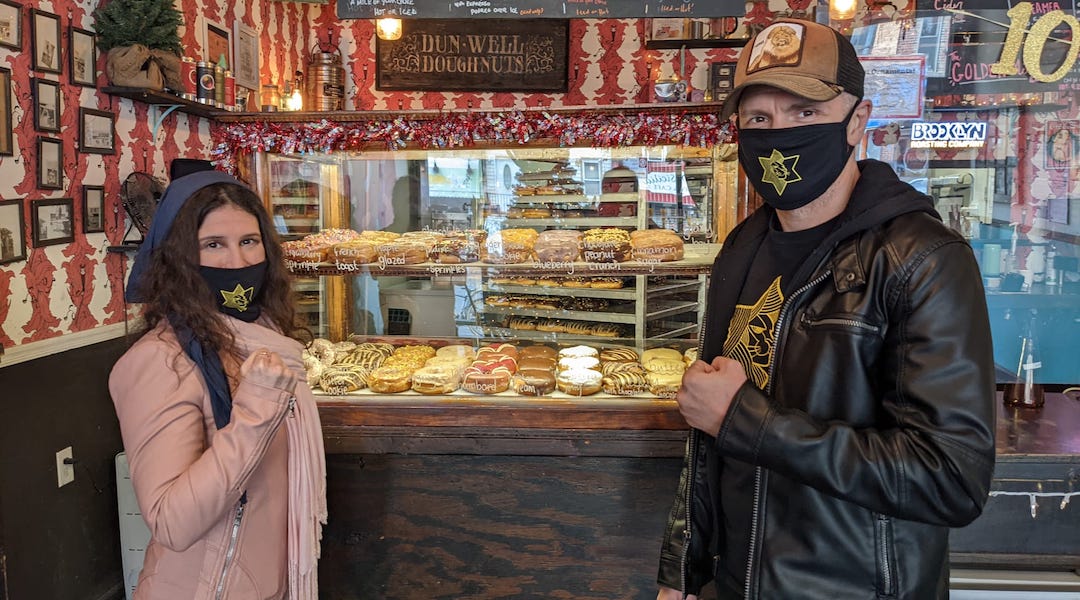 (New York Jewish Week via JTA) — Yuri Foreman’s professional peak as a boxer arguably came 11 years ago, when he faced off against Miguel Cotto in a marquee boxing match at Yankee Stadium.

The match, dubbed the “Stadium Slugfest,” was a super welterweight title fight that had been promoted on huge posters at subway stops around the city. Foreman was a world champion who had won his belt the year prior. Cotto was one of the best boxers in the world, and won the fight by technical knockout in the ninth round.

For most boxers, it would have been a tough break. Luckily, Foreman had a backup plan: He was also studying to be an Orthodox rabbi. He was ordained in 2014 but kept training, fighting and teaching self-defense classes. Now, a decade later, he’s putting his ordination to use — with a twist.

Like many rabbis, he’s using his expertise to provide kosher certification to eateries. Unlike most rabbis, however, he’s only going to certify vegan restaurants.

Oh, and he’s also mounting a boxing comeback at age 41.

“People know quite a bit of the ‘sweet science,’ which is boxing, because we’ve been punching each other for thousands of years,” Foreman told the New York Jewish Week, when asked why he started a vegan kosher agency. “We know way more about the sweet science than the science of food…. It’s horrific, what people do to themselves. Even though we say Jewish law says ‘don’t harm animals,’ we’re harming ourselves every single day.”

Foreman’s journey to veganism was gradual — but now he’s a true believer. He likened it to his experience becoming Orthodox after growing up in a secular family that immigrated from the Soviet Union. One transformation flowed from the other: learning to keep kosher, he said, taught him to be more selective in what he ate. That led first to vegetarianism and then veganism.

His conversion to veganism was due at least in part to the influence of his wife, Shoshana Foreman, a physician’s assistant who became vegan well over a decade ago while working at a health food store. Her secret, she said, is to ask someone what their favorite childhood dish is, and then make a vegan version of it. For Yuri, whom she married in 2018, she made vegan pelmeni, Russian meat dumplings.

In May of this year, the Foremans established VBR Kosher — which stands for “Vegan Boxing Rabbi” — as a limited liability corporation. Since then, the couple has certified one establishment: Dun-Well Doughnuts in the Bushwick neighborhood of Brooklyn. The small shop now bears a certificate in the window with Foreman’s signature, certifying that Dun-Well’s offerings are “strictly vegan, kosher and pareve.” Foreman hung the sign after checking the shop’s kitchen at the end of November, ensuring that all of the ingredients — hence all of the food being sold — met the standards of Jewish dietary law.

Around noon on a mild fall day, Foreman and Dunbar affixed the small case bearing a scroll to the doorpost of the red-brick building, and recited the appropriate blessing word by word. It now hangs somewhat above a bumper sticker reading “LOSERS WEAR FUR TRIM.” 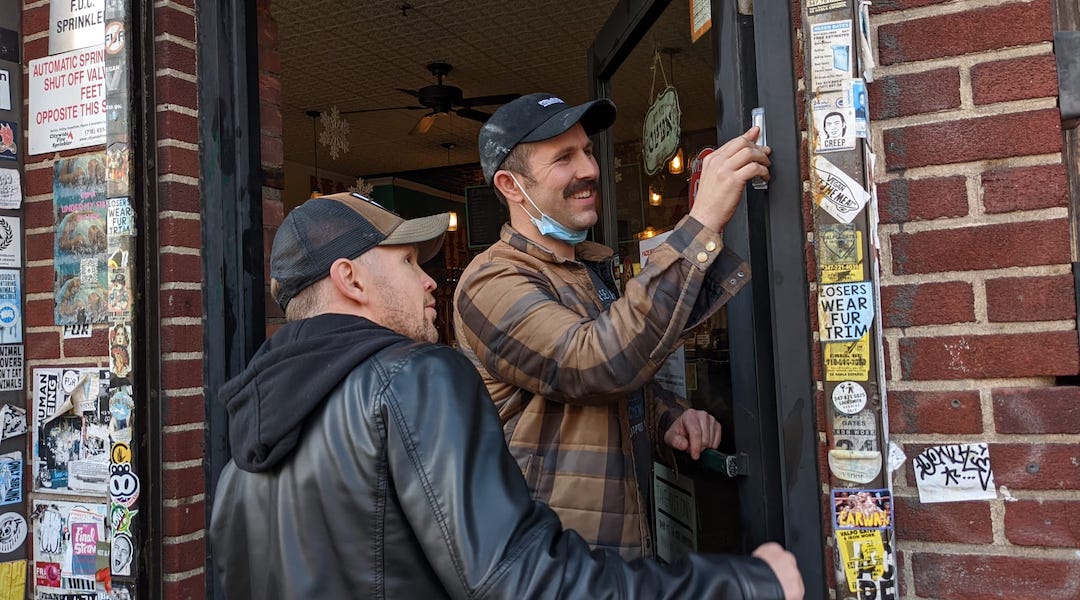 Daniel Dunbar, proprietor of Dun-Well Donuts, affixes a mezuzah to the doorpost of the Brooklyn shop with Rabbi Yuri Foreman’s help on Monday, Dec. 6, 2021. (Ben Sales)

“I like making a product that’s accessible to everybody,” said Dunbar, who is of Jewish descent and identifies as secular. “We get asked a lot, ‘Are any of your donuts vegan?’ and when we tell them they’re all vegan, they’re very excited. Now I get to do that with people that are seeking kosher options and it’s really nice to be able to say, ‘Yes, you can have anything in this shop.'”

Dun-Well may be the first vegan establishment certified kosher by the Foremans, but they hope it won’t be their last. After all, vegan dining is on the rise in New York City; according to Eater, a string of restaurateurs are opting to go vegetarian or vegan both to save money and shrink their carbon footprint.

The couple hopes to supplement the kosher certification with online content — videos, posts, a podcast — about keeping kosher and being vegan.

“Our goal is to put this content out there for people to see, and to teach by example,” Shoshana Foreman said.

Being vegan is, perhaps unsurprisingly, not popular among the couple’s Jewish friends in their Brooklyn neighborhood of Crown Heights. Shoshana Foreman said friends were adjusting to their diet, though from time to time they need to decline invitations to meals on Shabbat.

“The short answer is, we stopped being invited,” Foreman joked.

At VBR Kosher, the Foremans are working with Rabbi Mike Moskowitz, an Orthodox rabbi who works at Congregation Beit Simchat Torah, an LGBTQ synagogue in Manhattan. Moskowitz has decades of experience in kosher supervision and provided certification to Dun-Well several years ago, before the certificate lapsed.

Because Dun-Well’s products contain no meat or dairy, kosher supervision is easier there than at many restaurants. But there are still things to look out for, like whether the food colorings and other ingredients are certified kosher. Dunbar said he had to switch out his soy milk to maintain the certification.

Moskowitz and the Foremans understand that some observant Jews may not recognize or trust their independent authority, as opposed to the imprimatur of a large and well-known kosher certifier like the Orthodox Union. But they’re confident that it will make a difference to some people.

“For people who feel that they know the people here involved and they trust them, then each person should do things that make them feel comfortable,” said Moskowitz. “I don’t feel kosher supervision is there to be persuasive. It’s meant to be transparent and educational and give people the opportunity to make informed decisions.”

Avrom Pollak, president of Star-K, a large kosher agency based in Baltimore, said that because kosher certification can be so complex, a lot of kosher eaters may be hesitant to trust a new certification.

“A lot of the kosher consumers are very discerning,” he said. “They want to know who stands behind that certification and they want to know, if a problem does arise, are they going to deal with it in an honest and forthright manner?”

For now, Foreman considers VBR Kosher something of a passion project, and isn’t charging for the service. In any case, it’s not his main gig. These days, he wakes up at 5 o’clock every morning to run eight miles or lift weights. He trains at a boxing gym in Sunset Park. He said he wants to get back in the ring because he feels good and doesn’t want to regret passing up an opportunity. And at a time when antisemitism is rising in New York, he added, he wants to show that Jews can be tough.

“I don’t want to be years ahead [and] be disappointed that I stopped doing this because a lot of people told me I’m old,” he said. “And partially, being a Jew, we need an image of Jews being descendants of freaking warriors, kings, priests. But we are definitely not a weak people.”

Foreman’s dual career does present a bit of a contradiction. How does he reconcile the violence of boxing with the rabbinic teachings that drew him to a peaceable vegan diet?

Shoshana Foreman  — who is also her husband’s boxing manager — pointed out that, in boxing, both fighters have consented to the potential bloodshed, which isn’t the case with animals at a slaughterhouse.

Plus, Foreman said that he’s an old hand at separating his work in the ring from his life outside of it. “I’m wearing two personalities,” he said. “In boxing, I have to be a different person. I cannot be a husband in the ring, right? Or a father in the ring. Otherwise I’m gonna get beat up completely. So I have to be that person who is about to punch someone in the face.”