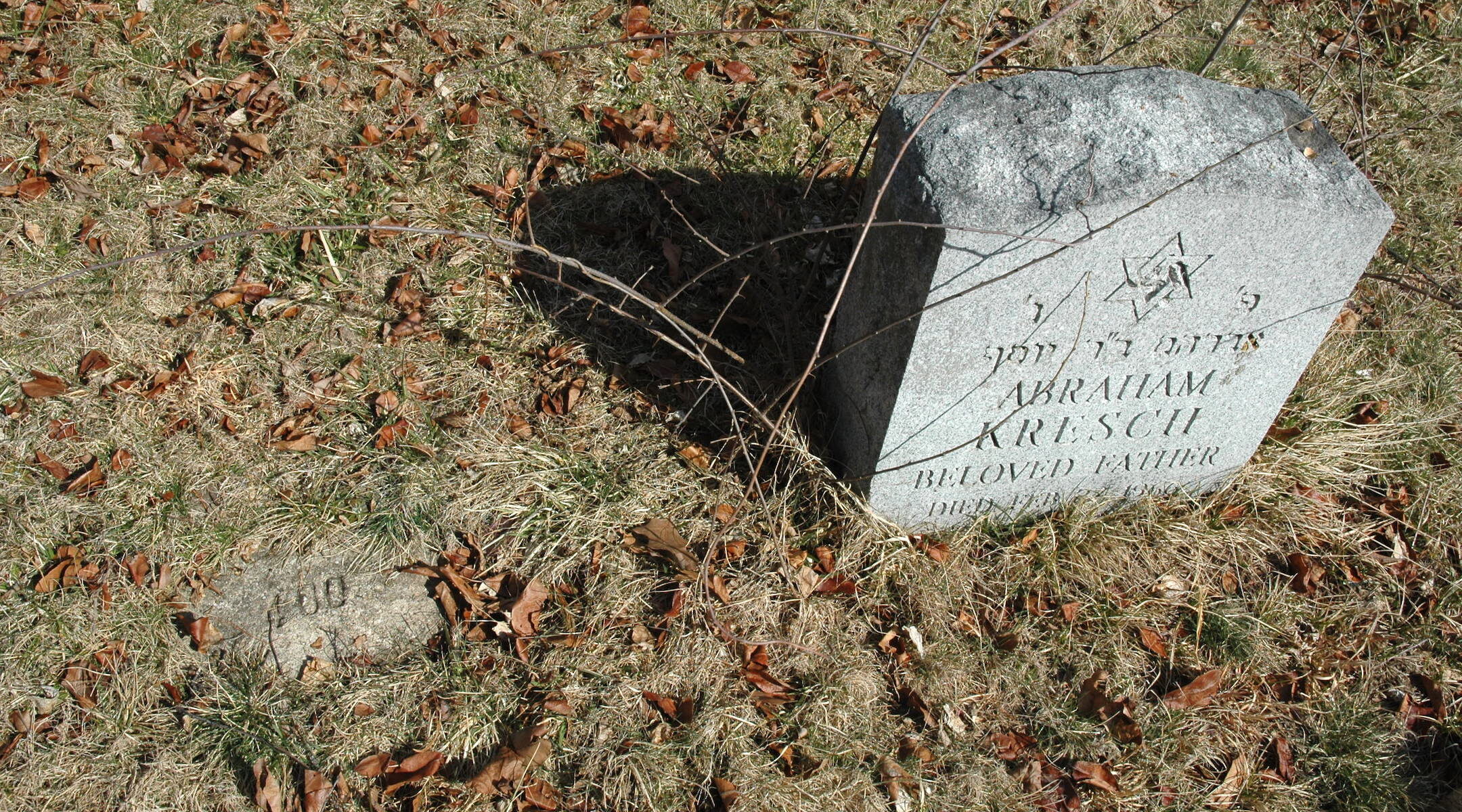 A number marks a Jewish grave, left, at the former Central Islip Psychiatric Center on New York's Long Island. A stone at right was added after the hospital began working with a Jewish burial society. (Patricia Desrochers/Touro Law Center)
Advertisement

(New York Jewish Week via JTA) — While researching his family tree, Brian Madigan of Locust Grove, Virginia, found something strange: Although his maternal great-great-grandfather had lived in Brooklyn, he was buried in East Islip, on New York’s Long Island.

Further research revealed that his relative, Napoleon Hedemark, had been committed to the Central Islip Psychiatric Center sometime before 1900. He died there on Nov. 21, 1916, at the age of 72. He was interred in its cemetery with simply a number to designate his grave.

Several weeks ago, Madigan wrote to the New York State Office of Mental Health asking for a copy of his relative’s “full file” to learn the circumstances that led to him being committed, the exact location of his grave and a copy of his photograph.

“I’m just looking for some kind of closure,” Madigan, 63, said. “I plan to visit there and I would like to know the location of his grave so I can erect a marker [with Hedemark’s name]. I can’t abide by my ancestors’ graves going unmarked.”

Madigan, a defense contractor, may get his closure — thanks to a twice-delayed agreement between a Jewishly affiliated law school and the Office of Mental Health. Before the COVID pandemic hit, they had agreed to care for the Jewish and non-Jewish portions of the cemetery and to assist relatives who believe a loved one is buried there.

For Napoleon Hedemark and other former patients interred at the cemetery, it is an opportunity to restore in death the dignity they may have been denied over the 120-year history of what had been one of the largest psychiatric hospitals in the United States. The unacknowledged dead include Holocaust survivors, who twice in their lives were given numbers instead of names.

Madigan was referred to the state by Sam Levine, director of the Jewish Law Institute at the Touro Law Center, which was built on a portion of the psychiatric hospital’s property after it was closed in 1998. The cemetery is all that remains of the hospital, which was opened in 1889. The cemetery holds the graves of an estimated 5,500 former patients from not only the Central Islip facility, but the Kings Park and Pilgrim State psychiatric hospitals. After the Central Islip hospital closed, the state fenced off the cemetery, restricted public access and provided mowing and cleanup.

Shortly after Touro opened in 2007 as a law school “consistent with Jewish tradition,” Ken Rosenblum, then the school’s associate dean of admissions, walked out the south door of the school and saw a rusted fence at the end of the parking lot.

Pushing aside overgrown brush, he began walking through a seemingly empty field until he realized he was stepping on graves and rectangular stones, flush with the earth, bearing numbers. He then saw two iron gates covered with vines, each marked with a rusting Star of David.

While Rosenblum was unaware that there was a Jewish cemetery with some 500 graves in Touro’s backyard, others remembered. The Jewish section had been consecrated in 1980 by Rabbi Melvyn Lerer, the former Jewish chaplain at the psychiatric center. He had raised funds for the cemetery’s restoration, the installation of the gate with the Star of David and the purchase of proper headstones for all future internments, which numbered about 100 until the hospital closed.

Ben Etkin, president of the Men’s Club at the North Shore Jewish Center in Port Jefferson, Long Island, said that each year for the last 30 years the Men’s Club has held a ceremony at the Jewish section of the cemetery at which they recited the Mourner’s Kaddish for those buried there. 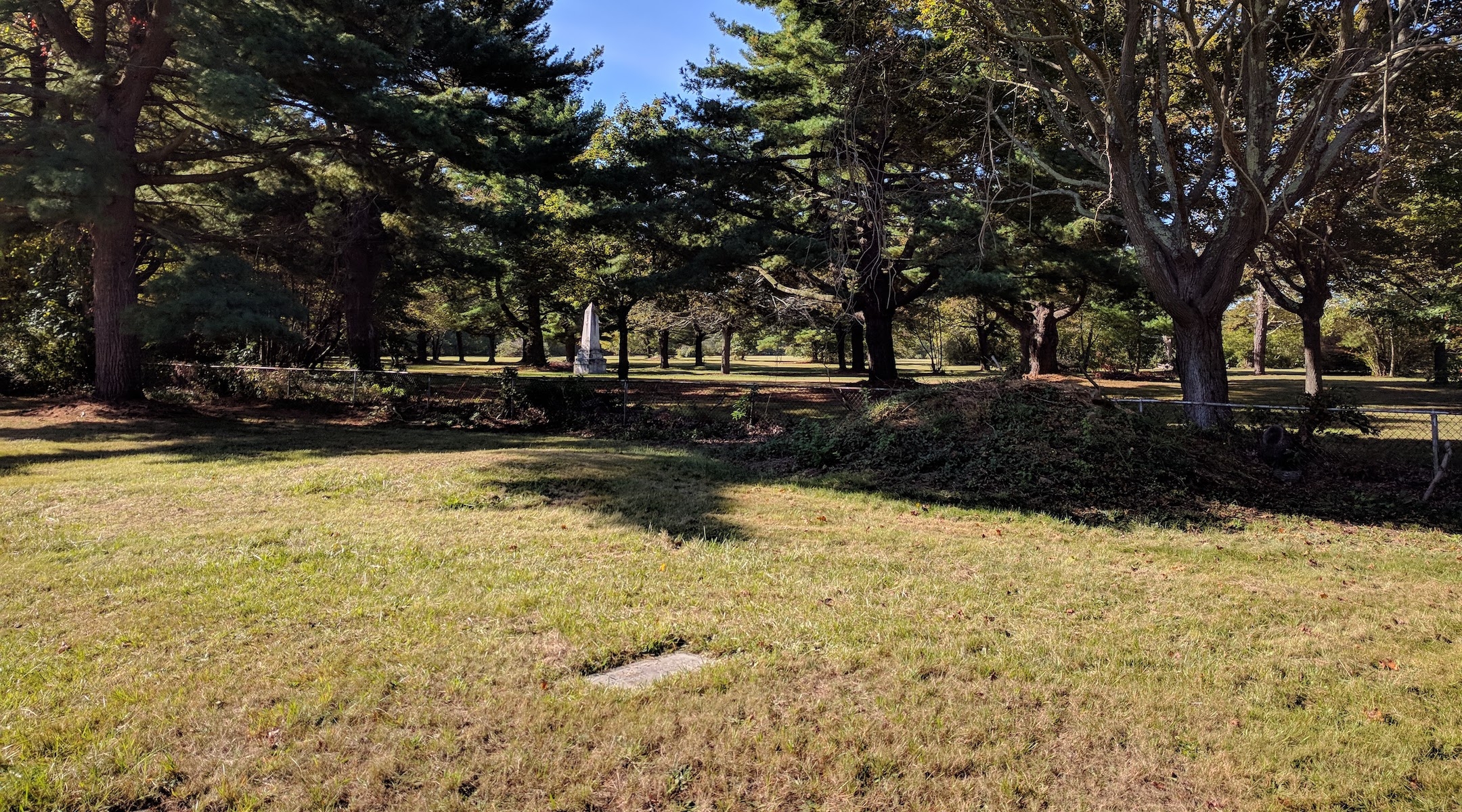 The Jewish cemetery at the former Central Islip Psychiatric Center on Long Island includes small stones, many engraved only with numbers, marking the graves of many of the 500 Jewish patients buried there. (Patricia Desrochers/Touro Law Center)

“We have never failed to have a minyan. These people have no one to say Kaddish for them,” he said. “We go each year after the High Holidays. We walk around and clear some of the footstones that have been covered up. And we tell some anecdotes. The people buried there deserve it. It’s a shame they were buried under just a number.”

Until a few years ago, Rabbi Lerer attended this annual ritual and would often remark that those buried there were forgotten in life and discarded in death, Levine said.

In an interview, Lerer, 92, suggested how so many people would come to be buried in a hospital cemetery, without even a name to remind people who they were. “Most of them were bereft of families,” said Lerer, who in 2018 retired after 42 years as the Jewish chaplain at Pilgrim State and before that at Central Islip. “Many had been in the hospital for 40, 50 or 60 years, and they were the only ones left in their family.”

Some families were also “embarrassed that they had a relative in a psychiatric hospital and so they didn’t want to claim the body. So I arranged the funeral and for the chevra kadisha [burial society] of Shomrei Hadas Chapels in Borough Park. At each funeral, the only ones there were myself, the guy who died and the gravedigger.”

Hired at Central Islip in 1976, Lerer he met with the hospital’s deputy director and soon had an area designating the area as a Jewish cemetery.

From then on, each person buried in the Jewish cemetery had a headstone that contained a Jewish star, their name in English, both the Hebrew and English date and the words in Hebrew: “May their souls be bound up in the bond of eternal life.”

In October 2013, the law school and the state signed their agreement in which the Office of Mental Health agreed to restore the cemetery and help relatives identify ancestors who lie under numbered stones. The project was delayed for a number of years before being revived in 2019.

There were plans to “hold a big event at which we would erect an historic marker at the cemetery, but then COVID came along and it was no longer a priority,” Levine added.

James Plastiras, a spokesman for the Office of Mental Health, said that project is once again under way, and would include a historical marker and paving an existing walkway. 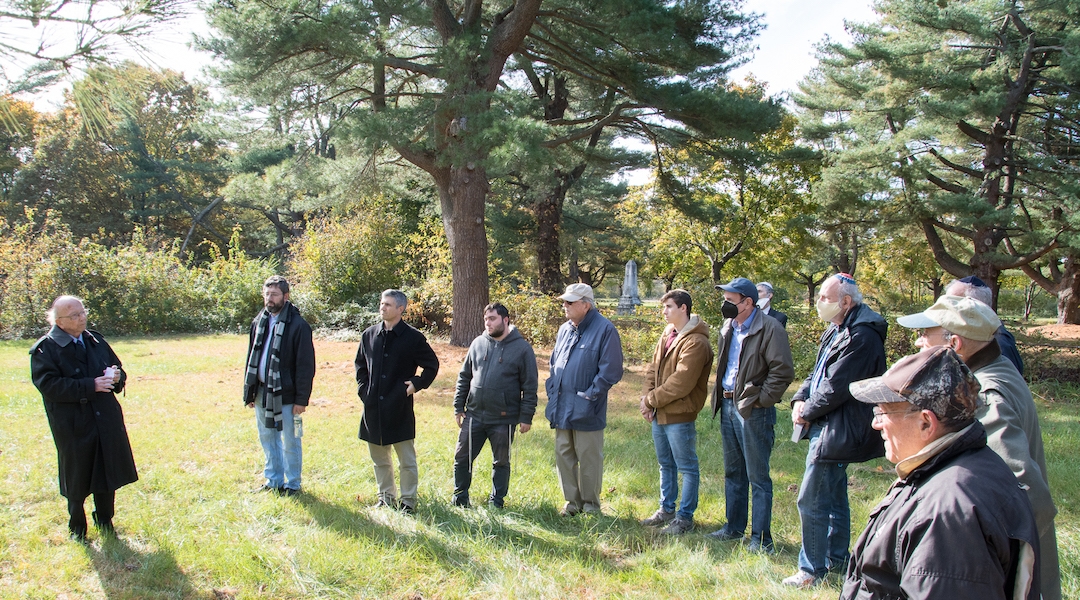 Members of the Men’s Club at the North Shore Jewish Center in Port Jefferson, New York, hold a ceremony at the Jewish section of the cemetery of what had been the Central Islip Psychiatric Center, Nov. 11, 2021. (Ray Cella)

He added that families are free to erect approved markers at the graves of relatives “once direct lineage has been established” through the supervising facilities’ Records Department.

Rosenblum, who is now retired, also noted that some of those interred at the cemetery were Holocaust survivors.

“I felt so moved to get involved in the cemetery when I learned Holocaust survivors are buried there,” Rosenblum said. “That was one of the reasons I made a pest of myself to get funding for a beautiful new fence.… We want to pave the central walkway and put in benches so that students can use this as a place of quiet reflection and there would be limited public access.”