In Brooklyn, a Jewish group tries a face-to-face approach to fighting antisemitism 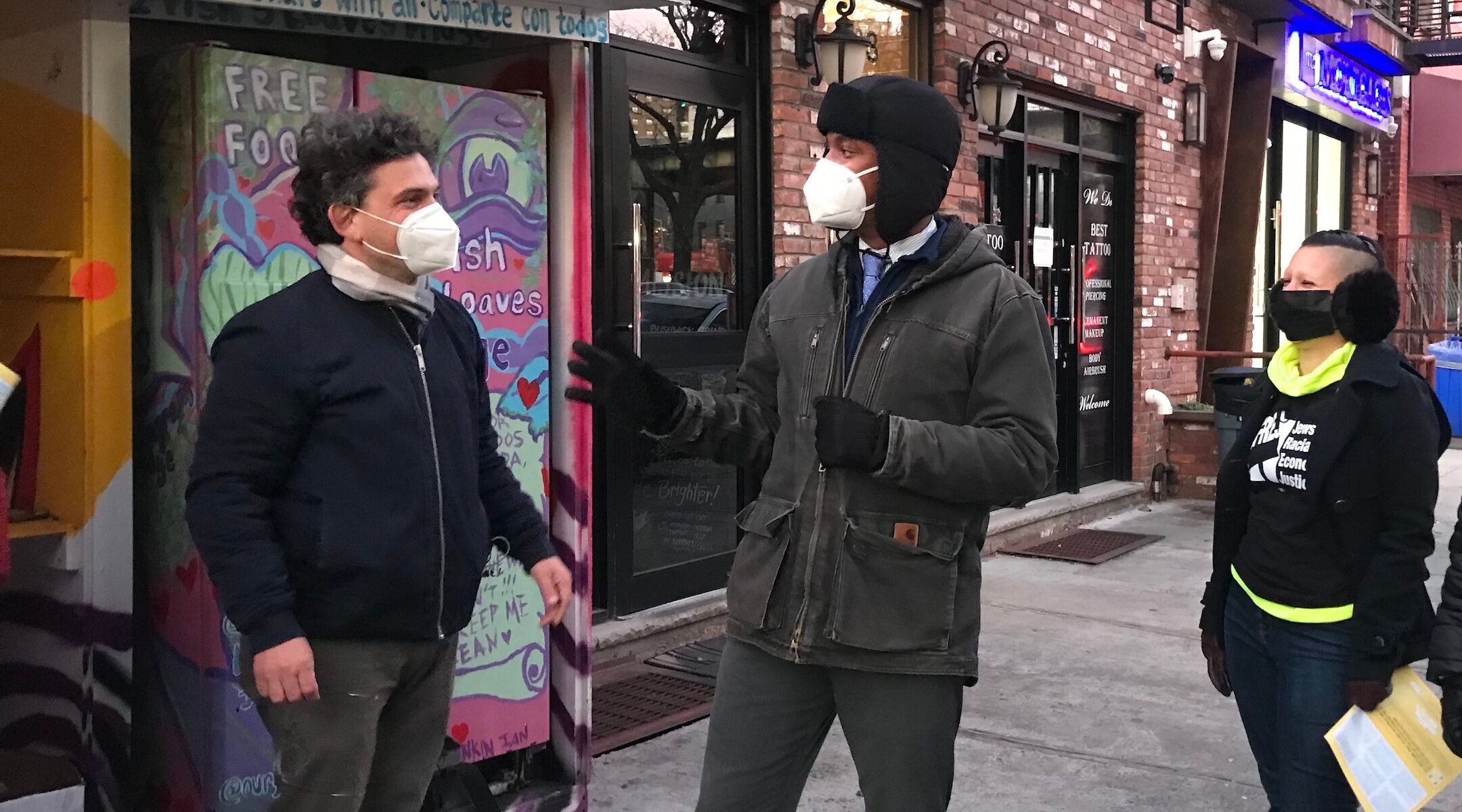 NYC Councilmembers Lincoln Restler and Chi Ossé speak to members of Jews for Racial & Economic Justice, who were in Williamsburg, Brooklyn to canvas passersby and offer tips on how to defuse antisemitic and other bigoted incidents, Jan. 4, 2022. (Julia Gergely)
Advertisement

(New York Jewish Week via JTA) — On Sunday, Dec. 26, in the Bay Ridge neighborhood of Brooklyn, Blake Zavadsky, 21, was walking down the street with his friend Ilan Kaganovich when he was punched, ostensibly for wearing an Israeli army sweatshirt. “He called us ‘dirty Jews’ and that’s all I remember,” Zavadsky said of his attacker, in an interview with CBSNewYork.

In the aftermath of the incident, dozens participated the following Sunday in a solidarity march through the nearby Bensonhurst neighborhood, led by the newly elected Republican city councilwoman Inna Vernikov. (The rally was moved out of Bay Ridge “out of respect for the neighborhood’s large Palestinian and Muslim population,” Vernikov spokesperson Tova Chatzinoff-Rosenfeld told the Brooklyn Paper, although it still drew counterprotestors from pro-Palestinian groups.)

Local and state politicians, including New York Gov. Kathy Hochul, denounced the crime in tweets and statements, and the New York State Police opened an investigation. The Anti-Defamation League of New York/New Jersey offered a $5,000 reward for information leading to the arrest and conviction of the individual responsible for the attack.

It’s a familiar pattern following the antisemitic incidents that occur in double-digit numbers every month in New York: An act of hate occurs, which is followed by a call for Jewish communities to rally for solidarity and protection. Politicians join the cause, either marching with their feet or denouncing antisemitism on social media.

But one group, the progressive Jews for Racial & Economic Justice, is trying a different approach. On Sunday in Bay Ridge, while other Jews marched in protest, JFREJ canvassers spread out in the neighborhood, offering bystanders tips on intervening when they see a hate crime and engaging in conversations in an effort to diffuse any future racist or antisemitic incidents.

“The organizers of the march were cynically exploiting a recent attack,” said Sophie Ellman-Golan, director of strategic communications at JFREJ, about Sunday’s rally. “For us, we’re taking the action that we regularly take because we take hate crimes seriously.”

(Vernikov’s office did not respond to the New York Jewish Week’s request for comment.)

On Tuesday, following yet another antisemitic attack — a Hasidic man was beaten with sticks Sunday evening in the Broadway Triangle area in Williamsburg — JFREJ canvassers were at it again.

From a central meeting point outside of a community fridge on Broadway and Whipple St. in Williamsburg, groups of two and three broke off in every direction to interact with community members.

Newly elected city council members Chi Ossé and Lincoln Restler joined the effort. Their two districts include the neighborhoods of Bed-Stuy and northern Crown Heights, and neighborhoods along the Brooklyn waterfront, such as Greenpoint, South Williamsburg, Brooklyn Navy Yard and Brooklyn Heights.

“I’m looking forward to getting the word out about how we can be better people and citizens,” said Ossé, 23, a native of Brooklyn. “Spread love, it’s the Brooklyn way.”

“This type of response — where we come together, where we educate our neighbors so we all are looking out for one another and we all stop this violence together — this is how we can transform our community,” said Restler.

Marches and rallies like the one held on Sunday, said Ellman-Golan, can be inflammatory or divisive. “They fuel division and fear among Jewish, Arab and Muslim New Yorkers,” she said. By contrast, JFREJ’s aim is to bring diverse stakeholders from every New York community together to promote safety, neighborly intervention and mutual respect.

“We’re never going to arrest our way out of antisemitism — that’s a failed approach,” said Ellman-Golan. “We fundamentally believe in the idea that our communities are the most effective way that we can address hate violence and issues like antisemitism.”

After a brief explanation of what bystander intervention means to the community, participants were given stacks of flyers with tips and graphics on how to intervene.

The same tips are also endorsed by the city’s Office for the Prevention of Hate Crimes, which was launched in 2019. Similar trainings are offered by the Center for Anti-Violence Education, a Brooklyn-based nonprofit.

Combatting antisemitism — and anti-violence work, in general — requires a range of tactics, Restler, the city councilman, said. Social media campaigns and solidarity marches are important work, he said, but they don’t reach every group in a community. What’s more, he added, rallies and social posts are reactive. Educating community members with tangible, practical tips on bystander intervention, by contrast, can help defuse potential future violent situations.

“There is a profound sense of isolation [within communities] after an attack,” Restler told the New York Jewish Week. “Being here in the neighborhood, talking to people on the street and offering support and guidance is one of the most potent signals to show that they are not alone.”

The mood was light and friendly as JFREJ members handed out flyers at the Lorimer St. entrance to the J train, on street corners, and in front of the Food Bazaar Supermarket on Broadway. Many pedestrians steamed right past, but dozens were seen walking down the street holding the yellow flyers, reading them and stuffing them into their bags.

Community work, Ellman-Golan explained, is like “being on the subway and catching someone’s eye and you know you’re both thinking the same thing. They’re a stranger, but there are little moments of knowing that you’re in it together, you’re experiencing something together and it is that warm feeling of community.”

“Strangers are also neighbors in New York,” she continued. “If people find that meaningful, we can actually translate that into genuinely caring for one another and making our communities places where people aren’t being hurt and ignored. I just think there’s a better way. It takes funding and support, certainly political support, but it’s really meaningful.”