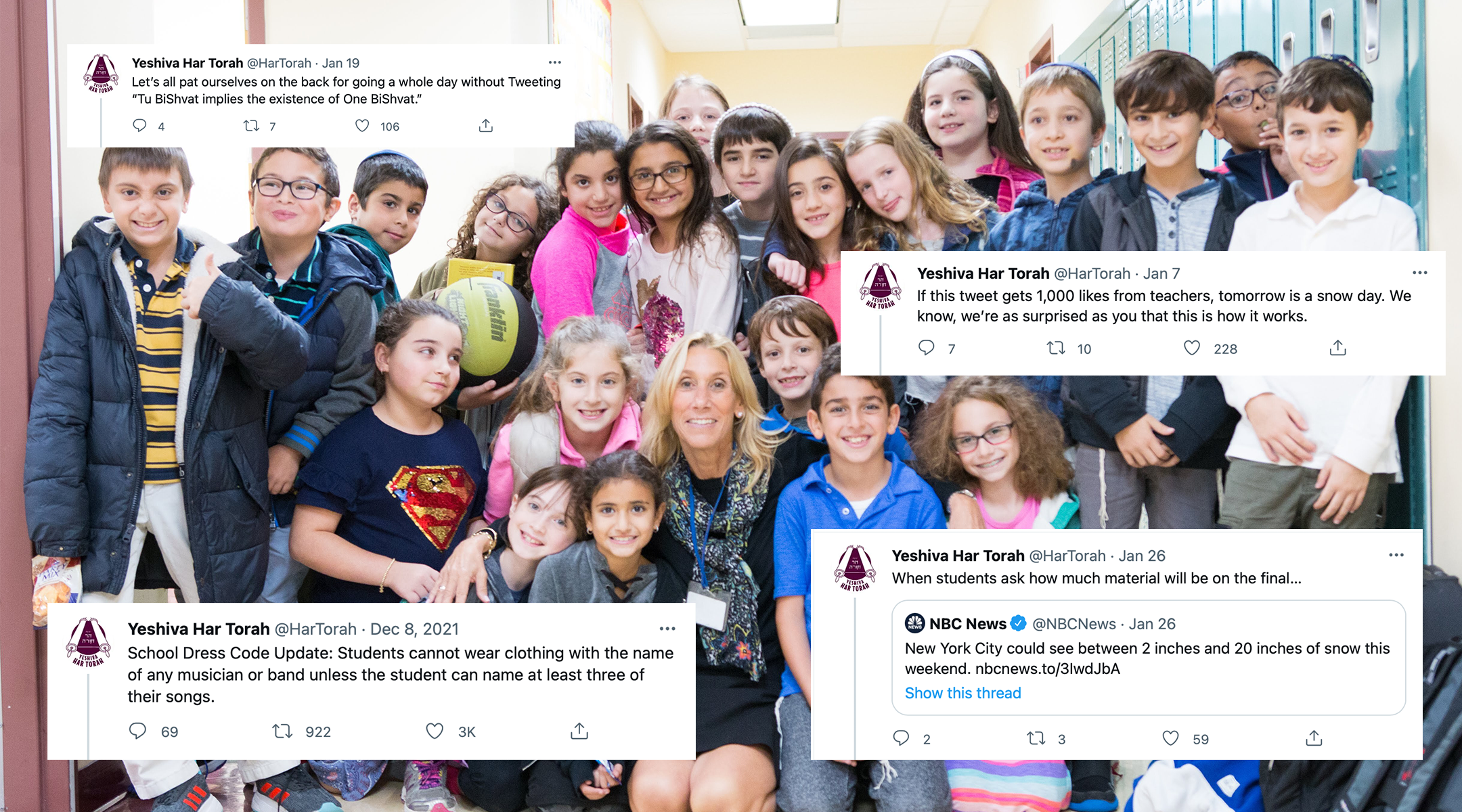 “I don't think the school is attracting kids because of its Twitter account,” said Rabbi Gary Menchel, head of the Modern Orthodox day school on Long Island. “But I think, ultimately, anything we can do to broaden that experience, and engage people in the yeshiva experience is a positive thing.” (Image courtesy Yeshiva Har Torah)
Advertisement

“I don’t think the school is attracting kids because of its Twitter account,” said Rabbi Gary Menchel, head of the Modern Orthodox day school in eastern Queens, New York. “But I think, ultimately, anything we can do to broaden that experience, and engage people in the yeshiva experience is a positive thing.”

And engage people have. While the school’s Twitter account has fewer than 4,000 followers, it has become something of a celebrity among those who frequent “Frum Twitter,” a corner of the internet in which religious social media mavens swap humor and hot takes on issues related to religious Jewish life.

It has also broken out of that corner of the internet at least once, with a viral riff on the school’s dress code: “Students cannot wear clothing with the name of any musician or band unless the student can name at least three of their songs.” The tweet eventually made its way to a grunge music Reddit subthread and from there circulated on mainstream Facebook — eliciting bemused reactions from non-Jewish users.

“It consisted mostly of people saying like, oh, this school is going to turn out some — I can’t say the words — kick-butt rabbis,” said the parent volunteer who runs the account.

The parent is committed to remaining anonymous because he has a day job unrelated to the school. But he and Menchel spoke with the Jewish Telegraphic Agency about the account’s origins, its big moments and how its mix of funny observations about school dynamics, Jewish memes and dad jokes gets developed.

This interview has been condensed and lightly edited for clarity.

JTA: Can you tell me when you started working on the account?

Parent volunteer: The account predates my involvement in the school by quite a while, but I don’t think anything was ever done with it for a long time. All our social media accounts are run by parent volunteers — we don’t really spend money on marketing. So there’s this account, we’re aware of it and at some point, I asked the IT person and I spoke to Rav Menchel about whether we should activate it, because we’ve been using our other accounts more: Instagram, Facebook and YouTube and a podcast. That was probably a couple of years ago, maybe a little less.

We didn’t really have any traction. We just sort of posted the same kinds of things we post on our other accounts — you know, happy kids at school — and it didn’t really make any impact even though that stuff seems to do well for us on our other social media accounts. As recently as several months ago we probably had 60 followers. It was going off into the ether, unnoticed.

How much time would you say you spend on the tweets? And where are you getting your ideas?

PV: I probably spend less than 15 minutes a day total working on it. I don’t know, it’s like, what’s the nature of inspiration? You know, you see something, it makes you think of something else.

Rabbi Gary Menchel: Let me interject for a second. He’s a very, very humble guy, a very creative guy. And we have a number of lay leaders in the school who are exceedingly creative and to ask how much time they spend — I think they spend all their time trying to be creative.

PV: That’s definitely true. I’ll be sitting on a work conference call and someone will say something and I’m like, “Oh, that would be a good school tweet.”

Can you talk about the Nirvana tweet? Was that one inspired by an actual child?

PV: I think my daughter will be upset at me for admitting this. But at some point, it became clear to me she was wearing these band shirts, including a Nirvana shirt, and really had no idea who they were. So that’s on me as a parent. She didn’t quite say, “I think it’s a brand.” But it wasn’t clear to me she knew it was a band at all.

There definitely was an interesting sequence to how it blew up the way it did.

I was told by our director of admissions that a child applying for our nursery showed up in a Queen T-shirt, on purpose, for their interview.

Do you think that the type of humor that you use in your tweets is characteristic of the school?

PV: We take education very, very seriously. But I don’t think that means we have to take ourselves too seriously. A lot of funny things happen during the day with kids — if you have kids, you know that, so I think it’s more relatable and endearing if you can sort of find the humor when you know, a kid does something a little unexpected. But I wouldn’t take the tone of the social media accounts to be exactly the tone of education at Har Torah.

RM: We think that humor has an important role in creating the atmosphere that’s fun, and that’s enjoyable and that kids relate to. I think that, because we’re open minded and we’re progressive, and we embrace different ways to engage kids, there may be some similarities. But I don’t feel that the Twitter account or the social media accounts shape the direction of the school. But I think humor is not inconsistent with what the school wants to try to accomplish.

Do your kids know about your involvement in running this account? And do kids or teachers talk about it in classrooms?

PV: My older two definitely know I’m involved. I think they get a little bit of a kick when they hear from their friends at other schools saying, “oh, Har Torah’s hilarious” or “Har Torah’s awesome.” I think they do actually get some satisfaction. School pride is important.

RM: So I’ve had colleagues reach out to me and asked me if they could hire our social media person.

PV: You didn’t tell me that.

RM: It is talked about in school, people follow it and people notice it. And when funny things come out, I think people enjoy it. And they like the fact that the school is a place where we sort of have a good time and it doesn’t all have to be, you know, so serious, even though as I said, we take Jewish education very seriously.