These Messianic missionaries were at the Ukraine border, and now they’re coming to New York 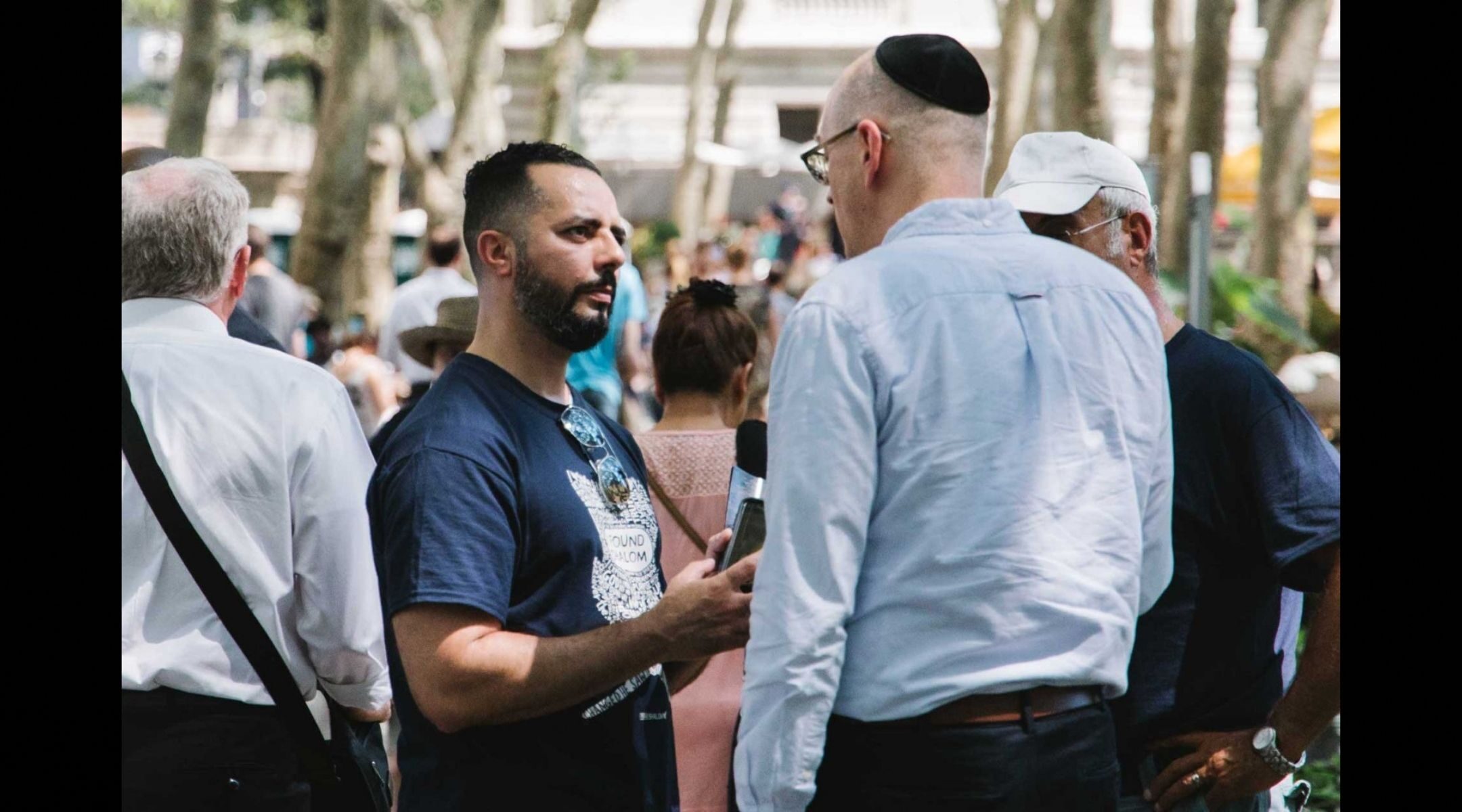 A member of Chosen People Ministries, second from left, speaks to passersby during one of the group's missionizing efforts in New York City. (YouTube)
Advertisement

(New York Jewish Week) — Fresh off of a mission on the Ukrainian border, a “Messianic” group that seeks Jews to accept Jesus is setting its sights on Jewish New Yorkers.

Chosen People Ministries is one two Messianic groups that announced plans this week to visit New York and share their gospel this summer, causing alarm for some Jews in the city who say that their practices are disrespectful.

CPM and the International Board of Jewish Missions both released materials that detailed their plan to visit New York.

“I think most Jews are not aware of how aggressive they are in campaigns,” said Shannon Nuszen, founder of the anti-missionary group Beyneynu, which first reported the missionary groups’ plans.

She recalled a recent effort, in which Yiddish copies of the New Testament were sent to homes in the heavily Orthodox Jewish neighborhoods of Monsey and Spring Valley, New York.

IBJM is offering a missionary package for over $1,000 that runs from May 30 through June 6, which culminates at the end of Shavuot, the Jewish harvest holiday. The trip focuses on spreading “the good news of the gospel of Jesus the Messiah to God’s chosen people.”

“Our Jewish friends are a special people – proud of their religion and heritage,” the pamphlet reads. “For this reason, IBJM provides specialized training. Experienced workers will instruct you on how to approach and share the gospel with Jewish people.” 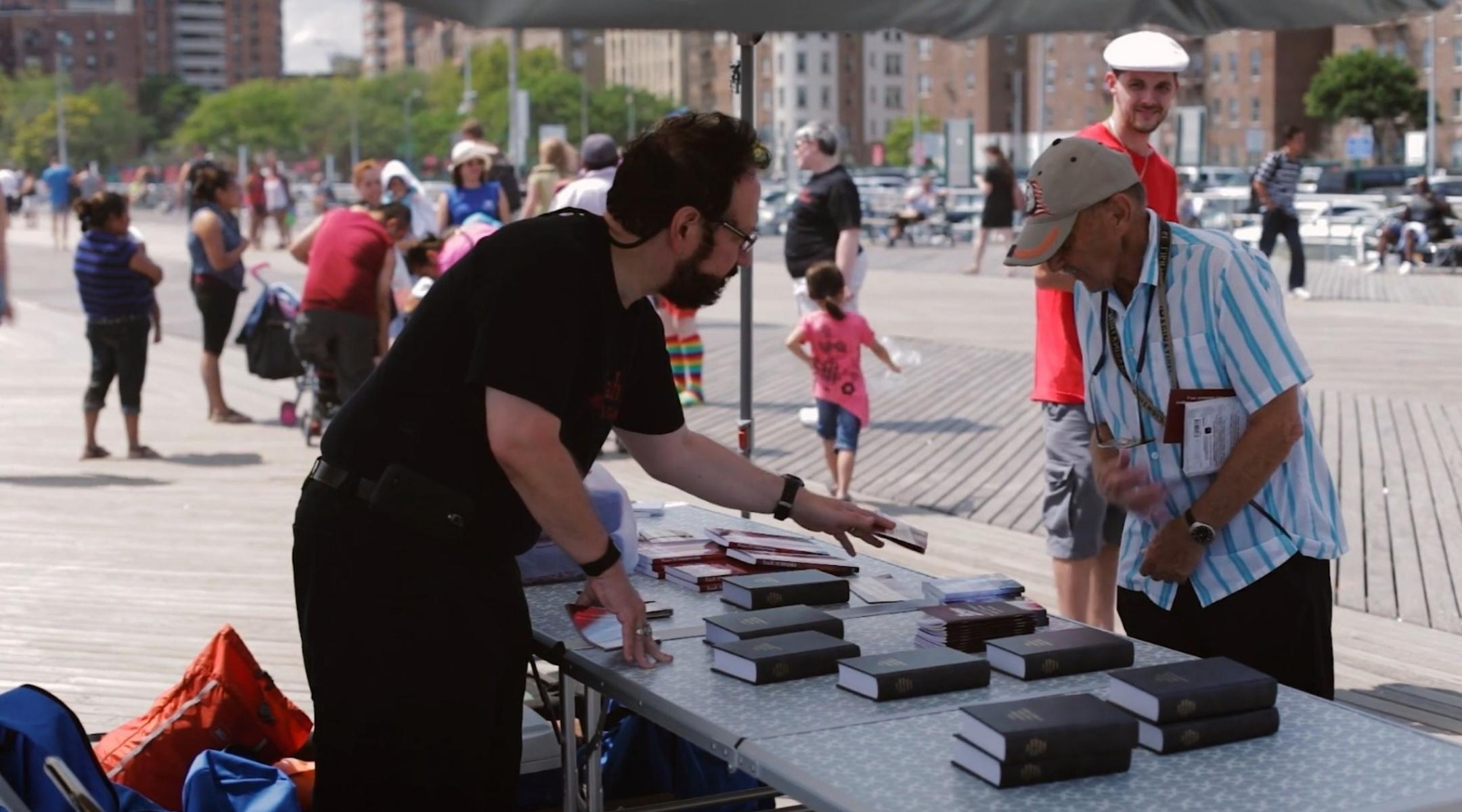 Chosen People Ministries, which is based out of New York, released a video as part of their Shalom Brooklyn program this summer, highlighting the importance of spreading their message to the Orthodox community.

“In the whole United States, the majority of the Jewish people are in Brooklyn,” the video said. “What a better place to actually come and reach them with the gospel.”

Chosen People Ministries President Mitch Glaser, who was born and raised Jewish in Brooklyn, said the group recently dispatched its representatives to the border of Ukraine, where Jews are among the millions of Ukrainians fleeing from the Russian invasion.

Rabbi Tovia Singer, who has studied the Messianic movement for over 40 years, said missionaries at the border are weaponizing humanitarian help in order to “evangelize the exploited.”

“These Jews from the former Soviet Union are very vulnerable, because they’re knowledge base is very limited,” Singer told the New York Jewish Week.

Asked about this charge, Glaser said, “Let’s just say we’re handing out way more blankets than Bibles. This whole charge is trumped up. We’re just one group, but we’re sustaining over 500 people in Europe right now.”

Although it is difficult to gauge how successful such groups are in winning followers, there are 400 “Messianic” congregations in North America combining elements of Christian and Jewish worship. In Israel, more than 30,000 people belong to Messianic congregations.

Jewish groups have long resented Messianic groups for trying to blur the lines between Judaism and Christianity. And yet according to a Pew Research Study in 2013, 34% of all Jews in America said that believing in Jesus as the messiah is compatible with Judaism. (“This does not mean that most Jews think those things are good,” Alan Cooperman, deputy director of Pew’s Religion and Public Life Project, said at the time. “They are saying that those things do not disqualify a person from being Jewish. [But] most Jews think that belief in Jesus is disqualifying by roughly a 2-to-1 margin.“)

Nuszen said that while Orthodox Jews are steadfast in their Judaism, Messianic missionaries seek converts who are among the most vulnerable, including widows and children.

“They purposely target kids that are away from home,” Nuszen said. “Some people are often looking for some sort of spiritual and emotional connection, which Christianity fills for them.”

“Every single Jew represents generations,” Sanders said. “But in their mind, they’re doing the most loving thing they could ever do, which is bringing Jews home, to save them from hell.”

Sanders said many missionaries have “a well-rehearsed script.”

“I’ve likened it to playing chess,” Sanders said. “If you don’t know the game, they’re going to walk all over you. It’s set up to show how ignorant most Jews are.”

Singer faulted the groups for misappropriating Jewish symbols, like the Sabbath candles or the ritual bath, or mikveh. 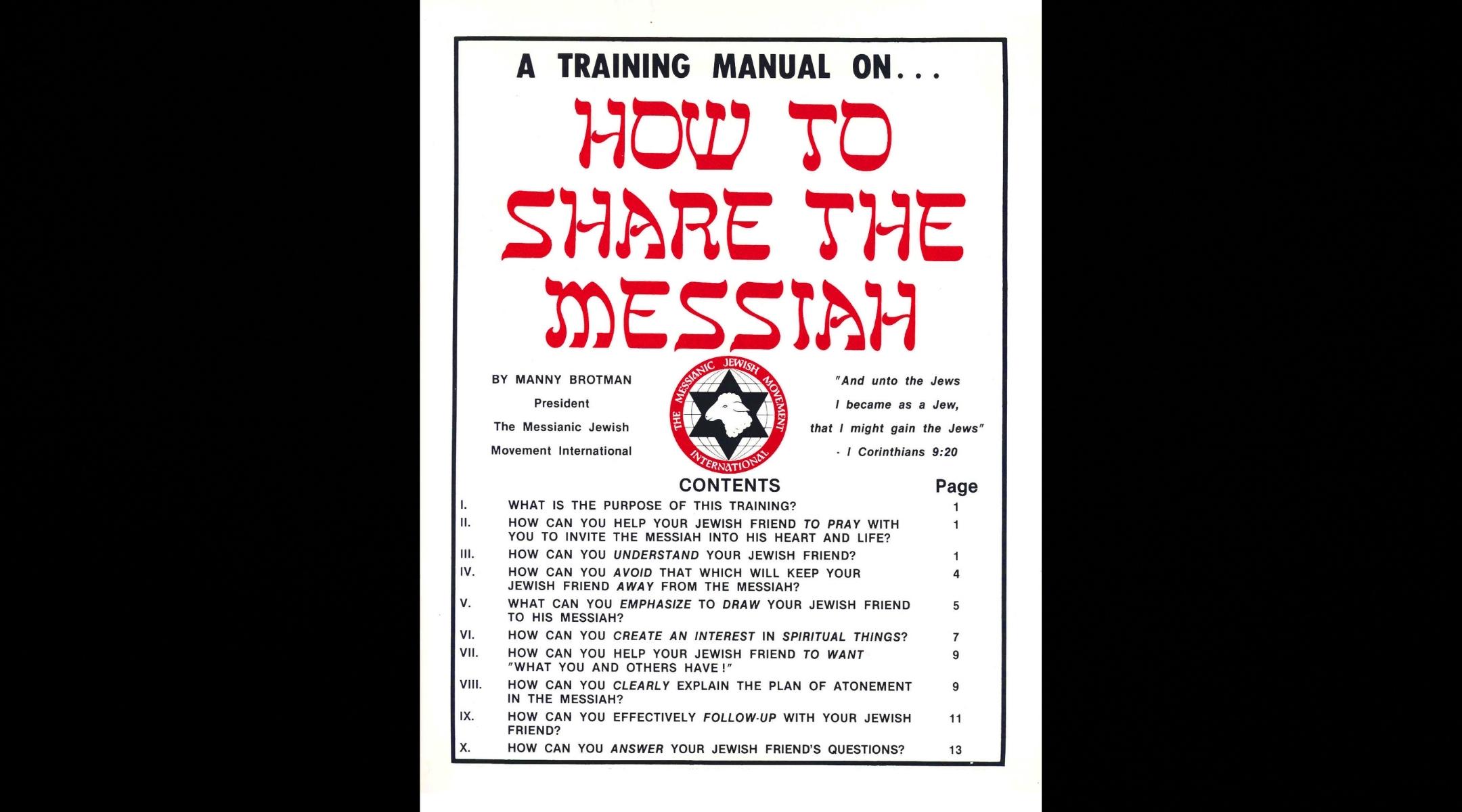 Although Chosen People Ministries, IBJM and Jews for Jesus all claim Jewish founders, most of their financial support comes from Christian individuals, churches and associations. Jews For Jesus income comes from mostly Christian donors, according to the Evangelical Council for Financial Accountability. Members of the current board of directors of the International Board of Jewish Missions, based in Chattanooga, Tennessee, are independent Baptist ministers and lay leaders.

Nuszen said that Messianic missionizing, kicked off in the 1970s, is a more recent spin on the historical attempt – condemned by some but not all Protestant denominations – to convert Jews to Christianity.

“They saw that Jews strongly identify [with] their own culture,” Nuszen said. “So their new marketing was, you can remain completely Jewish, but accept Jesus as your messiah and completely maintain all of your Jewish traditions.”

Glaser said that the accusations that missionaries are targeting Jews are unfair.

“I’m as Jewish as anybody in Chabad,” Glaser said, referring to the Hasidic Orthodox movement. “There is a long assumption that when a Jewish person becomes a believer in Jesus, they somehow forfeit their identity. They’re no longer Jewish. We don’t accept that.”

He said that CPM’s missionaries are no different than the Chabad emissaries who encourage Jews on the street to perform various rituals.

“They are actually far more aggressive,” Glaser said of Chabad. “And I admire them.” 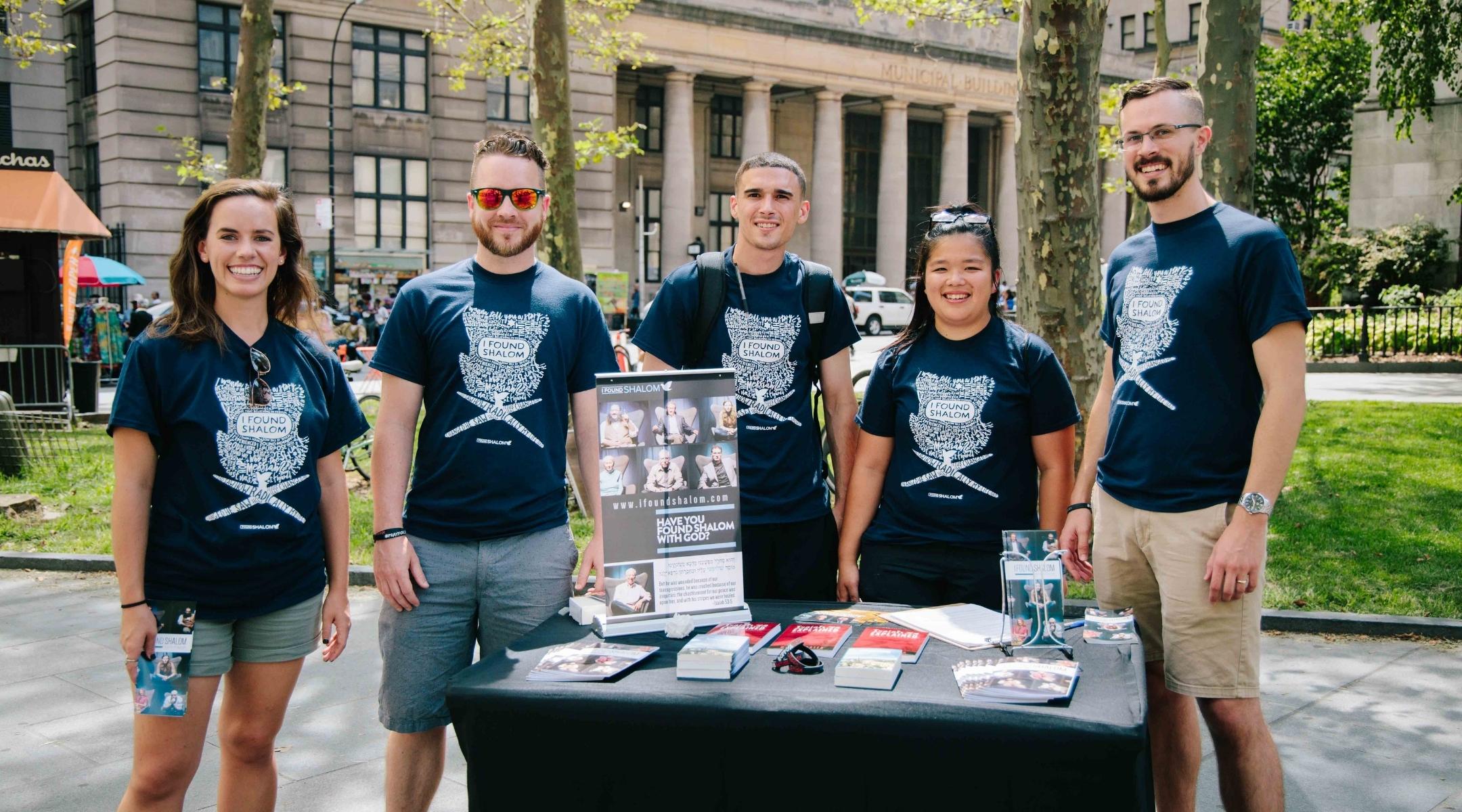 And yet, Chabad seeks to talk with people who are already Jewish, not bring them into another faith.

“We’re good friends to have,” Glaser said. “Because we have influence that your average Hasidic rabbi would never have. We’re not working against the survival and well-being of the Jewish community. In fact, we’re working for it.”

Nuszen said that while Messianic groups say they have a love for Judaism and Israel, Jews have to draw a line over this issue.

“Targeting vulnerable people at such a vulnerable time is downright offensive,” Nuszen said. “They’re supposed to be friends. We appreciate the Christian world, but this is just disrespectful.”