10 minutes with Barry Manilow: The iconic singer dishes on bringing his Nazi-era musical to NYC 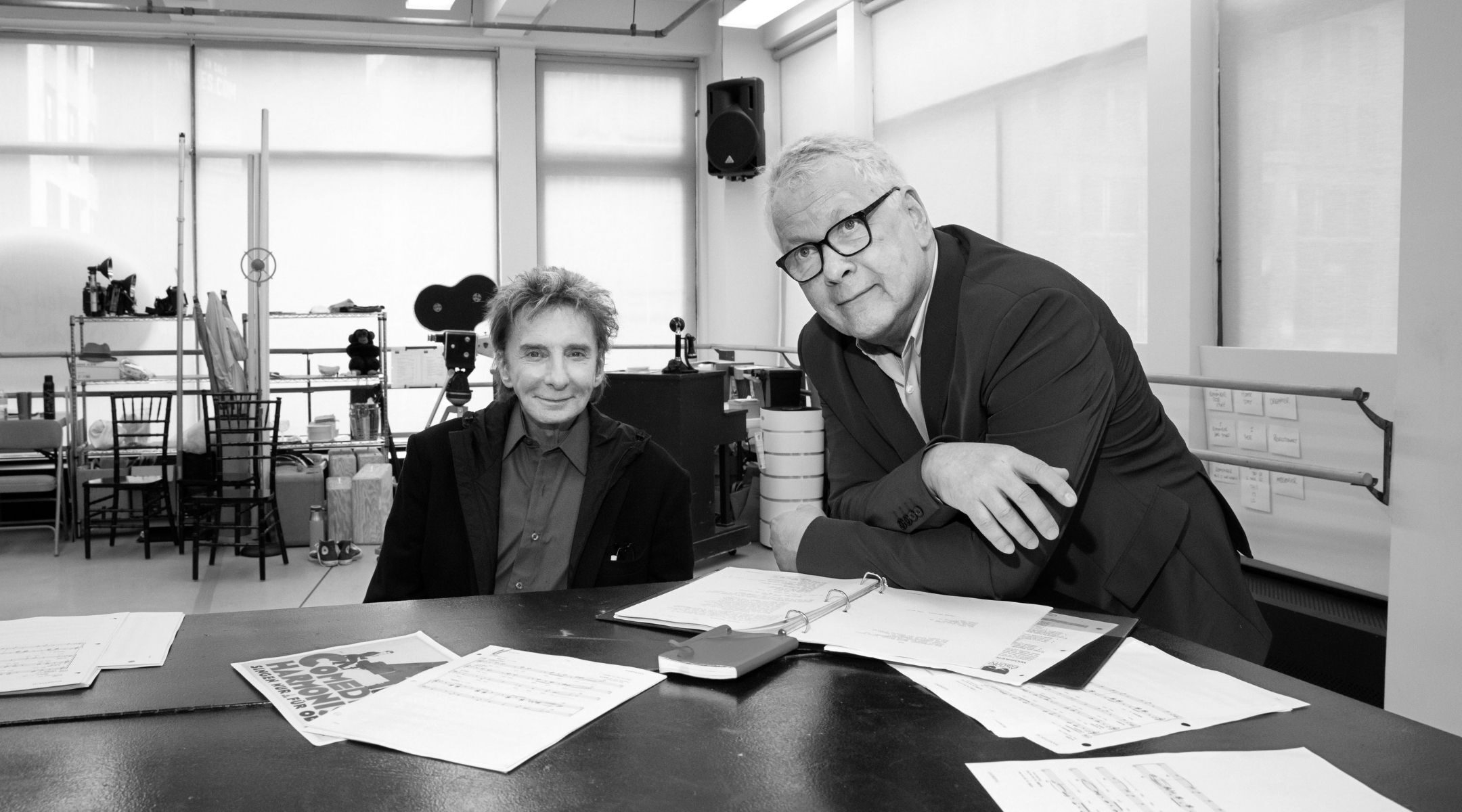 Barry Manilow and Bruce Sussman at a rehearsal for their musical "Harmony" in New York City. (Julieta Cervantes)
Advertisement

(New York Jewish Week) — Barry Manilow could fill a stage just by showing up with a piano, and he has: Starting in 1977, his stints on Broadway have nearly always sold out. With 13 multi-platinum albums, 28 top ten hits, and a famously devoted fan base, he might be forgiven if he wanted to rest on his laurels.

But at 78, the Brooklyn-born singer/songwriter and his writing partner Bruce Sussman are, well, ready to take a chance again: Their musical “Harmony,” which is being produced by the National Yiddish Theatre Folksbiene, is being staged in New York for the first time. It’s a musical about the Comedian Harmonists, a performing troupe of Jews and gentiles who combined close harmonies and stage antics in Germany during the 1920s and ‘30s.

Their success was a counterpoint to the rise of the Nazis, who eventually banned performances featuring work by Jewish composers, which had been a huge part of their repertoire. In 1934, the Jewish Telegraphic Agency reported at the time, the Harmonists were prohibited from giving public concerts because two members of the group were Jewish.

Manilow and Sussman have been working together for decades, with a catalog that includes everything from pop hits to musical theater spectacles. “Harmony” was first staged in 1997; Sussman learned about the group thanks to a lengthy German-language documentary that first aired in 1977.

“We couldn’t believe that we didn’t know these people,” Manilow said of the Harmonists.

Before the show officially opens on April 14 at the Museum of Jewish Heritage in Lower Manhattan, the New York Jewish Week caught up with Manilow and Sussman to talk about musical theater, their Jewish upbringings in New York City, and how to create harmony in an ever discordant world. 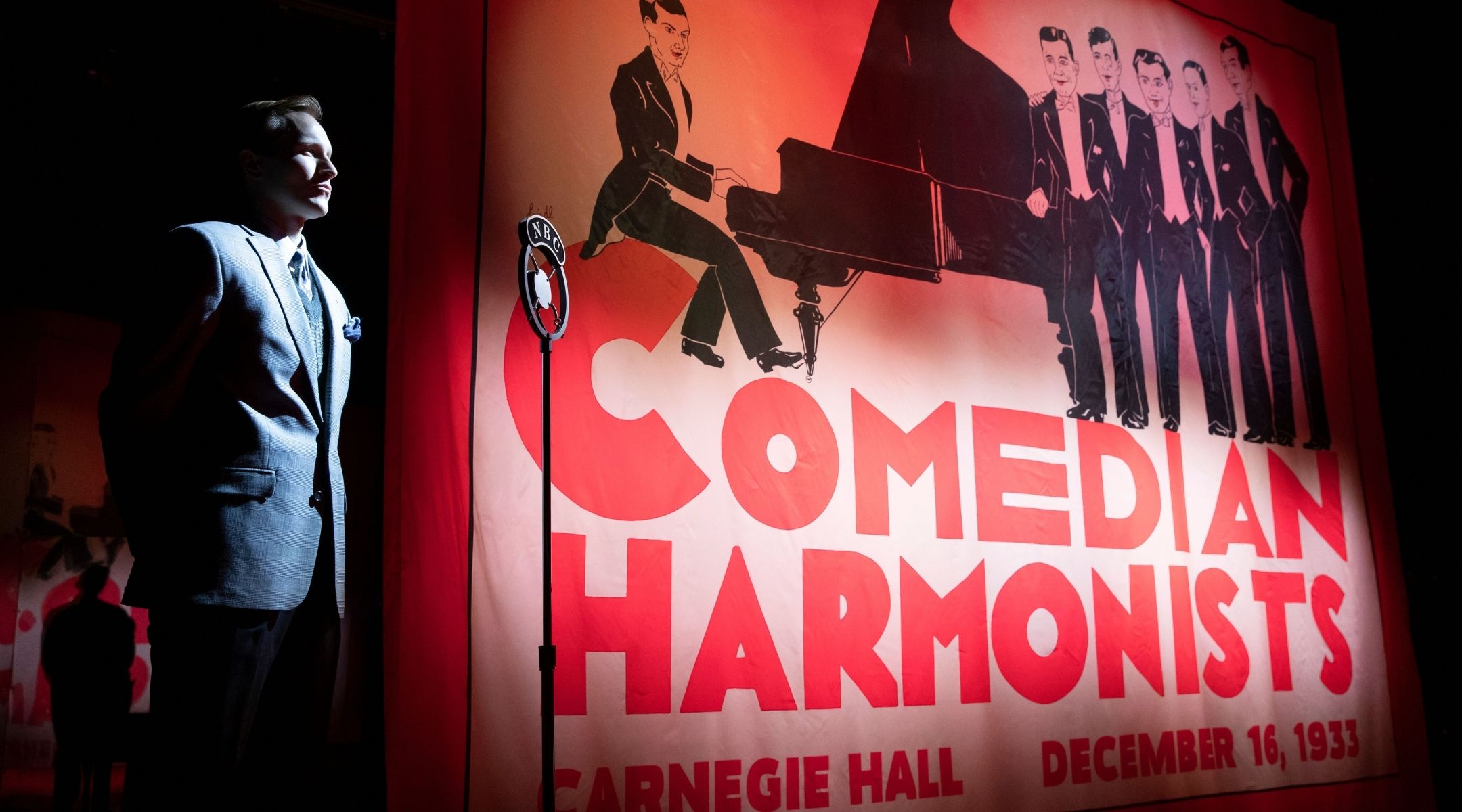 Barry, before you were one of the biggest pop stars on the planet, you started in theater, both you and Bruce. You had to sneak into the second act of “Company” when that show first premiered on Broadway because you couldn’t afford the tickets. Now, you’ve played on Broadway and “Harmony” is opening this year in New York. When you look back at it all, how does it feel seeing your career go full circle like this?

Manilow: I’m not sure it’s exactly full circle, but it’s exciting to be in New York, I’ll tell you that. We’re doing what we’ve wanted to do forever, which is bring “Harmony” to New York. This theater in particular is very moving. It just really resonates with this show, and with me and Bruce. It’s a very big impact on the audiences, being in this theater.

You had a Jewish upbringing, in one of the most Jewish places in the world, Brooklyn. Do you have any specific memories of what it was like growing up Jewish in Brooklyn? Were any of these memories used to shape the songs from the show?

Manilow: My one answer is the accordion. Every Jewish kid had to play the accordion before they would let you over the Williamsburg Bridge. I kid, but I was good at the accordion. They only teach you Yiddish folk songs. I loved those Yiddish songs. The family would sing a lot. I got a very musical Yiddish upbringing. When I left Williamsburg, I knew that world of Yiddish folk songs. I played them, I sang them, I arranged them, I knew everything about them. Jumping into “Harmony” was just a big familiar musical experience for me.

Barry, you’ve performed on Broadway for years, including the 1977 “Barry Manilow on Broadway” show that earned you a special Tony Award. Is there anything you can say about producing and creating theater now when compared to when you first started?

Manilow: It’s still the same. It’s an incredibly difficult thing to do, only it’s even more expensive as the years go by. I don’t know how these shows get up.

Sussman: Also, I think what is deemed commercial is a more narrow number of pieces. When we first started, there were situation comedies on Broadway. There were all kinds of musicals. And I think now, a lot of that stuff is no longer feasible to produce on Broadway. It’s either off-Broadway or regional theaters, but not on Broadway. It’s just harder to finance. The original production of “Follies” that Barry and I saw in 1971 was budgeted at $700,000 [approximately $5 million in today’s money]. And that was the most expensive show produced to date. You can barely do a workshop for that amount of money now. The finances are staggering, and then that puts pressure on the producers to make sure that they have something that’s financially viable. So that narrows the number of shows that are going to qualify.

So in this world of “The Lion King” and “Aladdin,” how were you able to bring this show, a show about Jewish singers facing oppression, to life?

Sussman: We wrote the show we wanted to write, and we hoped that people would like it and that we would find a home for it. It was just a matter of getting it to New York. And now, National Yiddish Theatre stepped forward with this beautiful, gorgeous building that I’m in, and here we are. 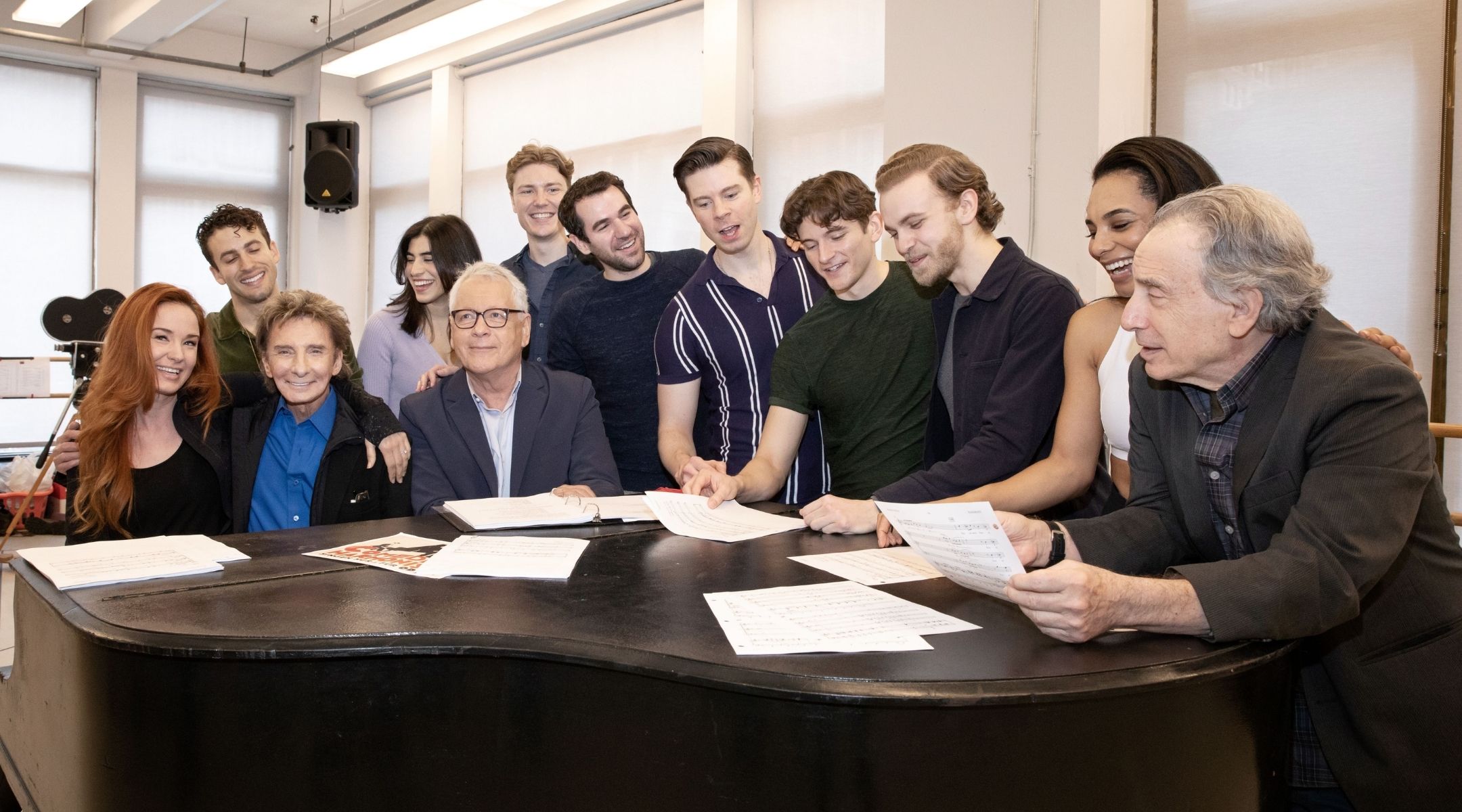 “Harmony” is a show set in a time where Jewish people faced a great deal of oppression and had to fight against that. Did you see any parallels between this story and life right now, or maybe within your own lives?

Sussman: I’m from Queens and Barry is from Brooklyn. We both grew up in something of a bubble. Being Jewish was kind of the norm. It wasn’t until I went to college in western Pennsylvania that I realized, oh my goodness, I’m the minority. I grew up in Jackson Heights. Every school I went to, on the Jewish holidays, nobody went to school. Everybody was off. I was always among my own. The story from “Harmony” was something I knew just from history, but it wasn’t anything I experienced personally in my life.

Manilow: It’s really not about my life at all. The only parallel is that I’m a musician, and they were musicians. And they were very inventive, so inventive that they were the first people to do the kind of harmonies we hear now. Now, we’ve got the high notes, we’ve got Backstreet Boys, nobody did that, plus they were [like] the Marx Brothers. And then all their records, all their music, all their movies, it was destroyed. They were the inventors of a style of music and comedy that had never been before them.

Sussman: And when we realized why we didn’t know them, that was the story. That became very compelling to us. One of the parallels too is that Barry and I, first and foremost, are collaborators. And this show is about “Harmony” in the broadest sense of the word. And one of the ways these guys found harmony was by finding the ability to successfully collaborate with each other. That’s something that Barry and I can relate to very strongly. A lot of people don’t know how to collaborate. And it is very important to us. It’s the thing that Barry and I do best.

My editors are going to kill me if I don’t ask about “Copacabana.” It’s one of your most beloved songs. Do you feel the same way about it? Do you still get the same thrill out of performing your most classic hit today?

Manilow: I do. I would stop doing it if I didn’t. These audiences are lighting themselves on fire with every hit I’ve been lucky enough to have. By the time we get to “Copa,” that’s the last straw for them. In my shows, there are so many hits and songs that they know, that by the time we get to “Copa,” they’ve forgotten I haven’t done “Copa” yet. When those drums start, it’s the last straw for these audiences.

You’ve both hit every music milestone in the industry. What else is there to accomplish?

Manilow: As far as what’s on the horizon, we don’t know yet. We’ve gotta finish this. It’s taken a long time. Whether we make it uptown or it ends at the Yiddish theater, I will be very happy. We’ll have an original soundtrack soon. That will be great. It would be so wonderful if we could move this uptown. Right now, we’re just in the weeds making sure that this version of “Harmony” is the best one we’ve ever had.