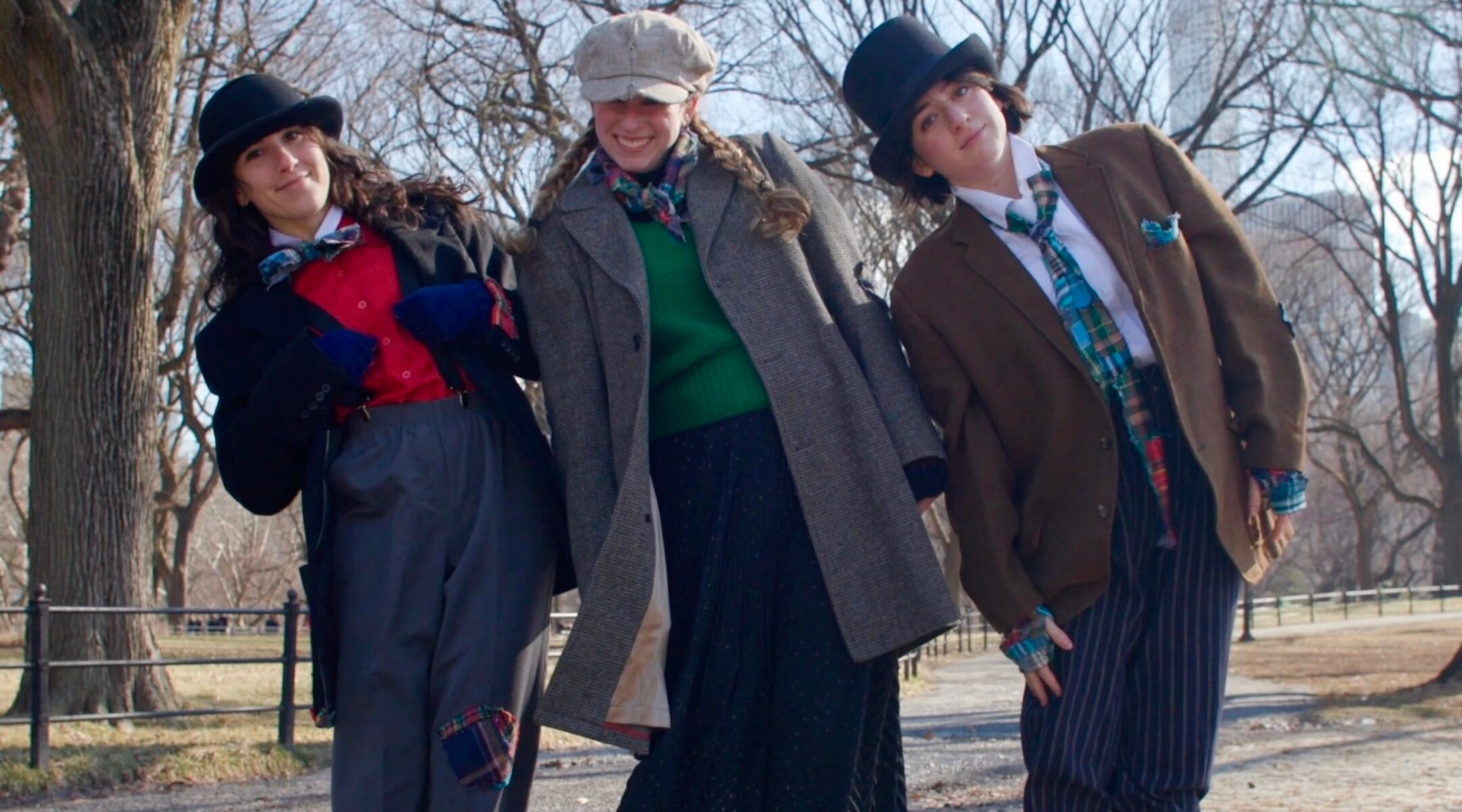 (New York Jewish Week) – Like many great ideas, “The Mamales,” a Yiddish singing group, began on a summer night at a bar on the Lower East Side.

The women who make up the trio, Maya Jacobson, Raquel Nobile and Jodi Snyder, had gotten together for a night of fun and to reminisce about the 2018 production of “Fiddler on the Roof” (“Fidler afn Dakh”) at the National Yiddish Theater Folksbiene, where they met as members of the cast.

Jacobson had been listening to The Barry Sisters — a duo whose Yiddish covers were wildly popular in the mid-20th century —  and realized it was time for the next generation to carry on the tradition.

“I heard The Barry Sisters’ version of ‘Abi Gezunt’ and I knew I wanted to record this with these two, my favorite people and some of the best performers I know, and make a trio,” Jacobson, 25, told the New York Jewish Week. “I knew people in the Jewish community would be really into this. Yiddish is such huge part of Jewish culture stomped on by the Holocaust that is really being found again.”

“We were just having a great time and dreaming out loud with each other,” Snyder, 28, recalled. “This project is coming at a time where we haven’t worked on a Yiddish project together in person in a while. I think we thought ‘why not dream big and try to make something for ourselves and have this passion project?’”

Despite acting in Yiddish productions and singing Yiddish covers, none of the women speaks Yiddish fluently, though Jacobson bragged that she had a continuous 71-day streak in Yiddish on the language-learning app Duolingo.

Nobile, an opera singer with Puerto Rican and Italian heritage, is not Jewish, but “fell in love with the Yiddish language and the culture” in 2017, when she started performing with the Folksbiene. “I have a pretty good ear for it. It’s in my soul,” she said of the language.

Nobile, 30, was awarded the National Theater Conference’s Emerging Professional of 2018 for her work with the Folksbiene, where she’s also performed in “Amerike: The Golden Land” and “The Sorceress.”

Snyder, almost straight out of Syracuse University at the time, earned laughs and glowing reviews as Fruma Sarah, the ghost who appears to Tevye and Golde in the dream sequence of “Fiddler.”

To launch the project, the women started a GoFundMe page, with a goal to record and release a cover and music video of their rendition of “Abi Gezunt.” They raised $5,000 over the course of two months from donors around the country.

“We’re constantly in disbelief by people’s generosity and excitement about this project,” Jacobson said.

The music video premieres today, just in time for Passover. It’s delightful and funny and, as Jacobson notes, sexy too. “When I listened to the song I realized that it’s really sexy,” she explained. “I don’t normally think of Yiddish as being sexy, but it totally can be.”

In the video, the three sing in Central Park, dressed as self-described “muppety, vaudevillian, mischievous, frumpy clowns,” who then transform into lounge singers hanging out and performing at a swanky bar, and back again.

The name of the group, The Mamales, is an homage to the 1938 Polish Yiddish film “Mamele.” It starred Molly Picon, “Second Avenue’s longest-reigning queen and the best-known Yiddish actress/singer later on Broadway,” according to the Milken Archive of Jewish Music. Picon wrote the lyrics for Abraham Ellstein’s melody and performed “Abi Gezunt” in the film, where it became an instant hit.

The three don’t know what exactly is in store for them after the video launch, though they are eager to perform at JCCs, bnai mitzvah, synagogues and other venues. Eventually, they hope to create a concept album with Yiddish covers and accompanying videos just like this one.

“We’re hoping for nichely viral,” Jacobson joked. “I hope it brings some joy and I hope that grandparents can share it with their grandkids and can show them how fun this language is. Because it’s a part of all of us.”