Members of Jews For Racial and Economic Justice and IfNotNow hold signs that say "Baruch Hashem For Abortion" at the Foley Square Rally on Tuesday. (Jacob Henry)
Advertisement

(New York Jewish Week) — Thousands of people, including Jewish groups, politicians and rabbis, turned out in Foley Square in Lower Manhattan on Tuesday to protest the news that the Supreme Court is preparing to overturn Roe v. Wade, the 49-year-old ruling that federally protects legal abortion in the United States.

The rally was quickly organized by a range of activists, politicians and community organizers, following Monday’s leaked draft opinion signaling the court’s intent to overturn Roe v. Wade, which was first reported by Politico. Many in attendance were wearing green, a color that represents a woman’s right to choose, stemming from Argentina’s fight to overturn restrictive abortion laws in 2018.

Among the Jewish groups represented were the left-leaning organizations Jews for Racial and Economic Justice, the Workers Circle and IfNotNow.

JFREJ activists showed up at the rally with green signs that said, partially in Hebrew, “Baruch Hashem for Abortion,” meaning “Thank God for Abortion.”

“Abortion is a Jewish value,” JFREJ Executive Director Audrey Sasson told the New York Jewish Week. “Our texts are very clear that we value life. We value the life of the mother. That’s what’s really important to us.”

She added that the attack on abortion is an attack from the “white Christian nationalist right.”

“That’s an attack on all of us: Jews, Muslims and people of all backgrounds,” she said. “This is an agenda that has been going on for decades to bully all the rest of us into submission.”

Many politicians were in attendance at the rally, including Speaker Adrienne Adams, representing many members from New York’s City Council; public advocate and gubernatorial candidate Jumaane Williams and Manhattan Borough President Mark Levine.

A particular highlight was New York State Attorney General Letitia James, who shared with the crowd that she had an abortion when she was first elected as a Council member in 2004. “I came to this issue in a very personal way,” she said. “I was faced with a decision, whether to have an abortion or not. I chose to have an abortion. I walked proudly into Planned Parenthood and I make no apologies to anyone, to no one.”

She also announced that New York will establish a fund for individuals who want to come to the state for an abortion.

New York Attorney General @TishJames gives a powerful speech about her own experience with abortion. She announced that New York will establish a fund for individuals who want to come to the state for a procedure, which will cover expenses for getting here. pic.twitter.com/jDcBAisaJ3

Jewish comedian Amy Schumer introduced the attorney general, saying that the “Supreme Court is going in the wrong direction.”

“I tell jokes, but this court is a joke,” Schumer said. “This country overwhelmingly supports abortion rights. The decision to overturn Roe is radical and outrageous. We’re mad and we’re going to fight the f**k back.”

Rabbi Stephanie Kolin of Congregation Beth Elohim in Park Slope spoke at the rally about how Jewish tradition has had “an ancient conversation” about the right and the need for abortion in this world.

She added that if Roe v. Wade is overturned, it will be a great risk for everyone, “Jewish people and beyond.”

“We know that the overturning of the right for abortion is going to hit mostly people of color, poor people and people who are most vulnerable,” she said. “My Jewish values do not permit me to stand idly by when that happens.” 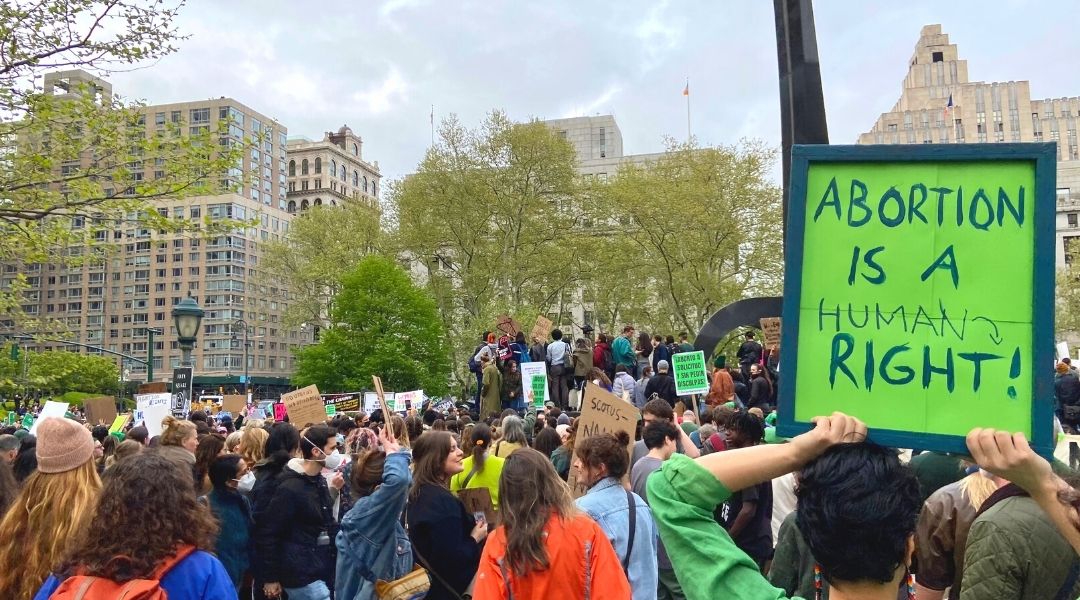 Thousands attend the rally at Foley Square on Tuesday to protest against the overturning of Roe v. Wade, May 3, 2022. (Jacob Henry)

The sentiments of the Jewish activists at the New York rally echo those expressed by liberal Jewish groups across the country that have long supported abortion rights. Pro-choice protesters, both Jewish and not, also convened in Washington, D.C. on Tuesday, as well as at local rallies held in cities and towns from coast to coast.

As the Jewish Telegraphic Agency reported Tuesday, the National Council of Jewish Women had previously announced, in April, the “Jewish Rally for Abortion Justice,” set for May 17 in Washington. The event’s aim was to build support among Jews for defending abortion rights at a time that the rights were under attack. Now it appears the stakes may be even higher.

So far Orthodox Jewish groups — which have increasingly aligned themselves with the Republican Party in recent years — have remained quiet on the issue. Many told our JTA colleagues that they are waiting to learn more before they express an opinion. Traditional Jewish law allows abortion in some circumstances; moreover, it requires  abortion when the life or health of the pregnant person is at stake.

In Manhattan yesterday, Ann Toback, CEO of Workers Circle, a social justice group that builds Jewish identity through progressive values, said that the overturning of Roe v. Wade shows that basic rights are under attack in America.

“It’s about controlling your life,” Toback told the New York Jewish Week. “It’s about the right to control your body and your reproductive health and well-being. For the Workers Circle, these are Jewish rights, which are at the forefront of fighting for human rights. That’s what it’s all about for us.”