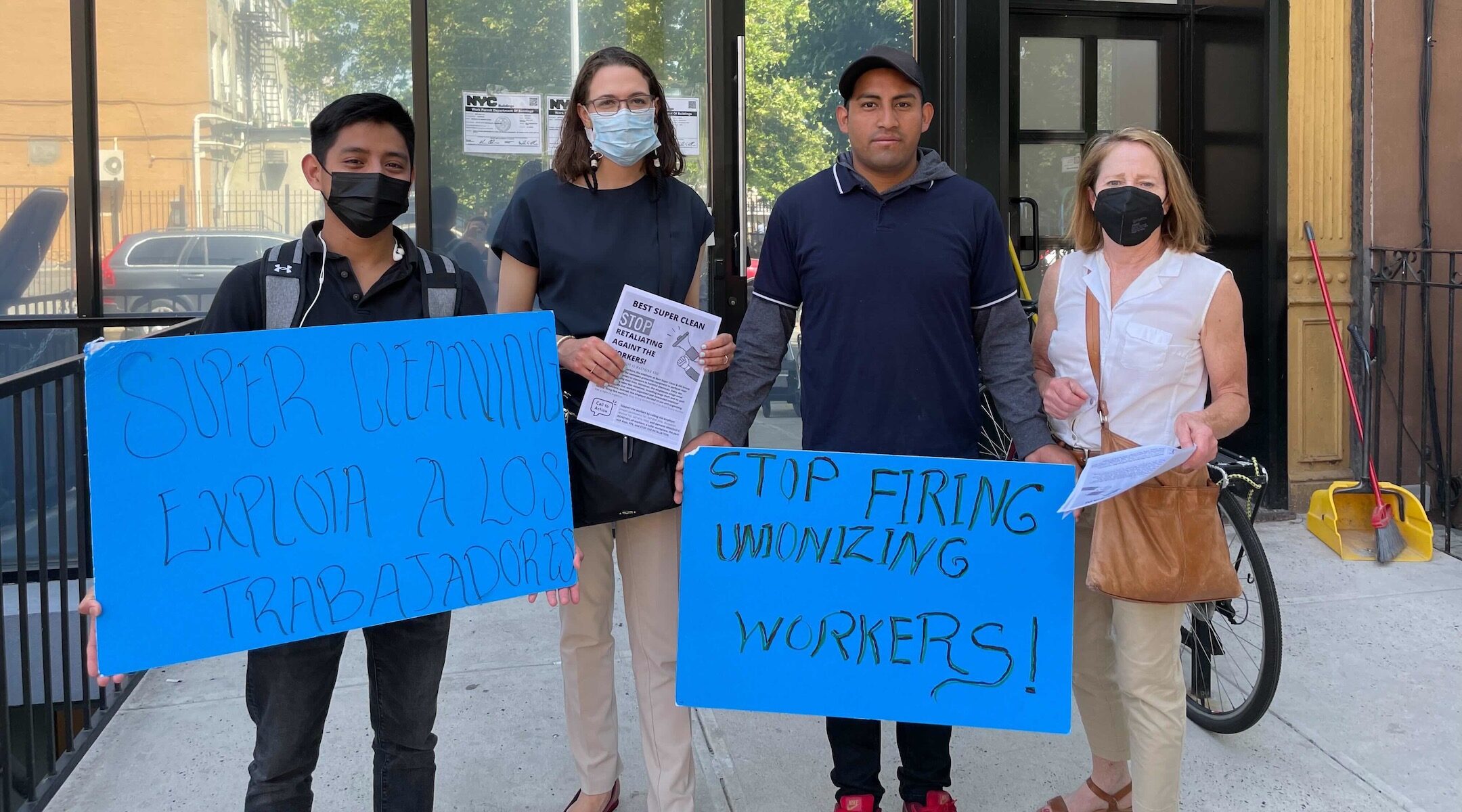 While delegates from each group met with management inside during an impromptu meeting, other members from each group held signs and passed out fliers to passerbys in the neighborhood. (JFREJ)
Advertisement

(New York Jewish Week) — Six local rabbis had planned to deliver a letter to a Williamsburg, Brooklyn-based construction and demolition company on Wednesday morning. The letter, which drew upon Jewish values and teachings, was meant to urge the Jewish owners to reconsider their company’s working conditions and policies.

Instead of a simple drop-off, however, the rabbis ended up spending about 90 minutes with a representative of the Hasidic-owned Best Super Cleaning. The team walked away with tangible concessions for the mostly Latino and immigrant workers at the company.

“It was an unexpected meeting,” Rabbi Rachel Goldenberg, the founder of Malkhut, a progressive Jewish community in Queens, told the New York Jewish Week. “We left with some agreements moving forward, some trust-building measures and some commitments to put some things in place to allow for better more direct communication between workers and management.” 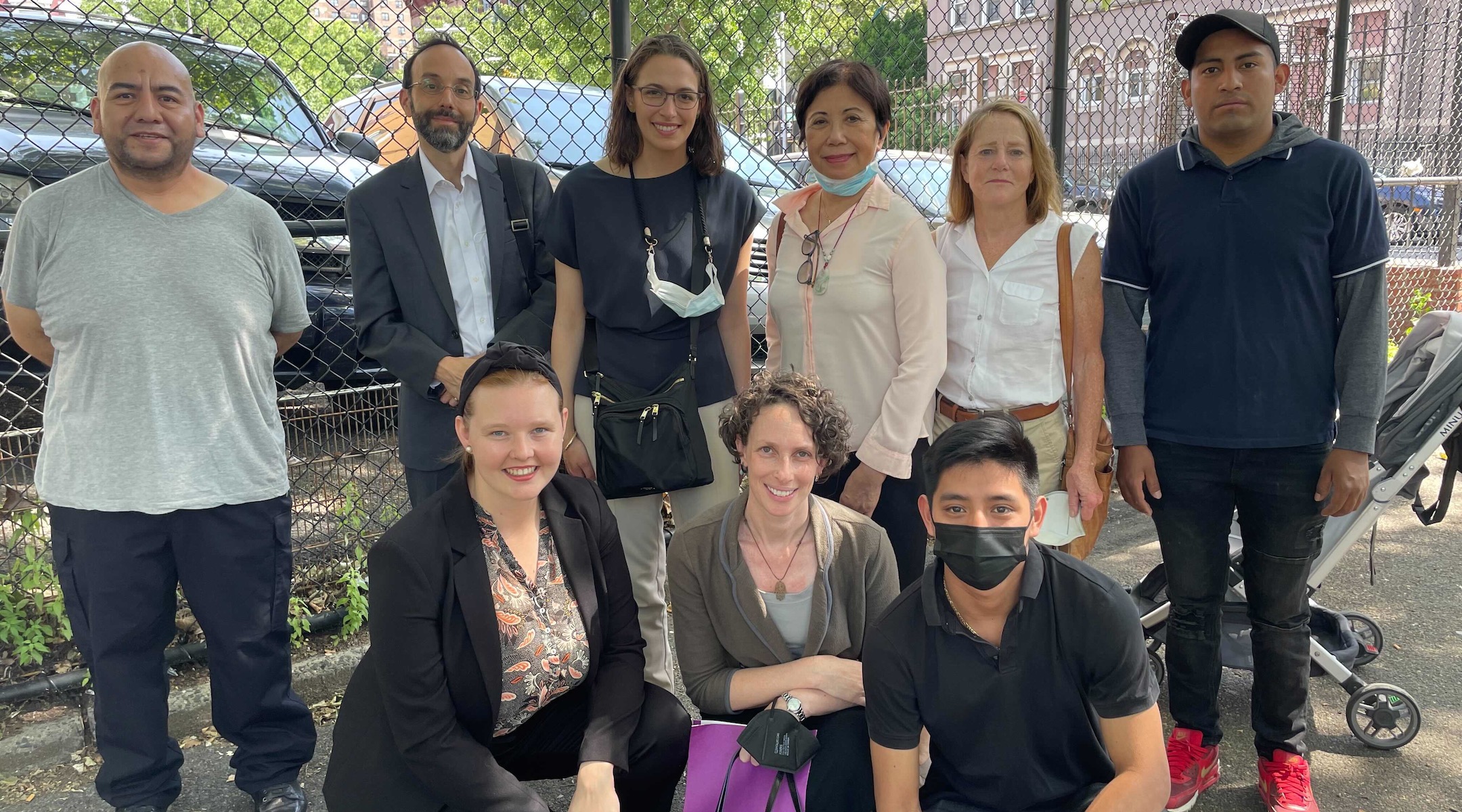 Representatives from JFREJ, T’ruah and the Laundry Workers Center showed up at the offices of Best Super Cleaning on Wednesday morning to demand better working conditions for the employees. (JFREJ)

The impromptu bargaining session between the rabbis and the business owners was part of a larger campaign that paired the left-wing Jewish activist organizations T’ruah, the Rabbinic Call for Human Rights and Jews for Racial & Economic Justice with the Laundry Workers Center, a New York-based, member-led organization that advocates for better working conditions for laundry, warehouse, food service and construction workers in New York City and New Jersey.

Sophie Ellman-Golan, director of strategic communications for JFREJ, explained that campaigns with management tend to be very drawn out — it’s rare to sit down for a meeting right away.

“We feel like [the meeting] was so successful because of our comrades at T’ruah and JFREJ,” said labor organizer Mahoma Lopez, founder and co-director of the Laundry Workers Center, who accompanied the rabbis on Wednesday. “They wrote the letter and are putting a lot of pressure on the employer and a lot of people are watching.”

At issue for the employees of Best Super Cleaning was poor working conditions — specifically lack of breaks and paid time off. Adelso Escalante, a 20-year-old immigrant from Guatemala, has worked there for three years. In a conversation with the New York Jewish Week, he described how lifting heavy objects up and down stairs, with little to no rest or breaks, and very few days off, led to increasing tension and pain in his knees. His condition grew so severe that he was hospitalized for several days earlier this month.

Escalante described how many of his coworkers also had stomach problems because of how late their lunch breaks were — often beginning work before dawn, they didn’t break until 3 or 4 p.m., or sometimes not at all. In addition, he said they were not provided proper personal protective equipment to shield them from the dust and other chemicals that they worked with day in and day out, which led to several illnesses among the team.

Escalante had requested sick days multiple times with his bosses — requests that he said went unanswered.“I was sick but it was nothing too serious. I returned to work. I worked all throughout the pandemic, through 2020. I’m a responsible person and do my work,” Escalante said in Spanish. “I felt bad, but I still went back to work. They didn’t say anything. Not a thank you or anything.”

Then, last week, a co-worker was fired for not showing up to work due to being sick, he said.

“We decided we weren’t going to endure this any longer,” Escalante said. “My coworkers had injuries and many of them had to stop working because of it.”

The Laundry Workers Center had launched the “Cabricanecos Campaign” in early May. Thirty-eight demolition workers at Best Super Cleaning marched with dozens of local supporters from the LWC, JFREJ and T’ruah to their bosses’ Williamsburg office to demand better conditions.

Since the launch of the campaign — which has included picketing campaigns in Williamsburg and passing out fliers to community members, sometimes on Shabbat — the workers say they have been receiving lunch breaks daily at more appropriate times.

“Since I’ve been working with the Laundry Workers Center, I’ve learned that so many things happening at my job shouldn’t be like that,” Escalante said. 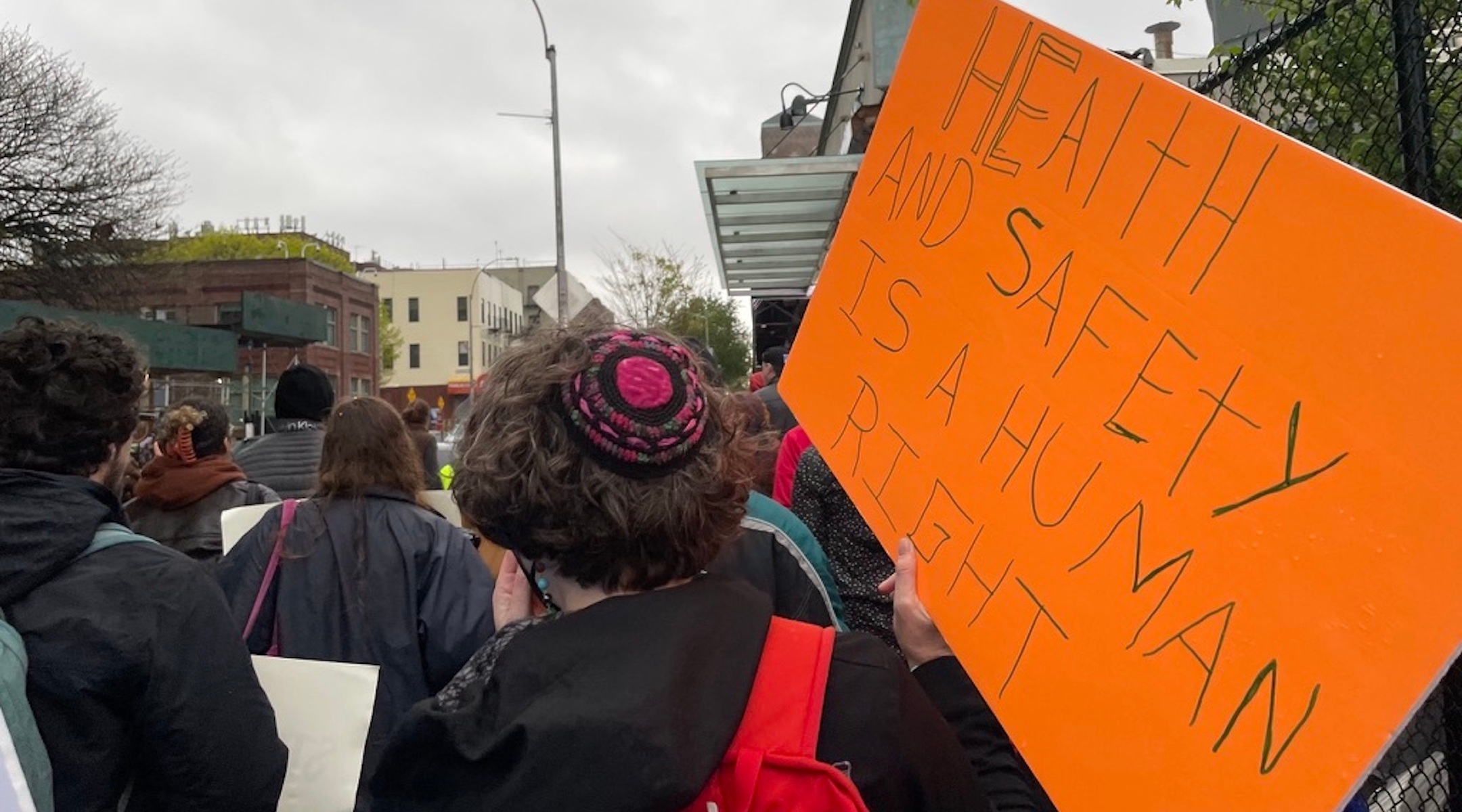 Rabbi Rachel Goldenberg holds a sign reading “Health and safety is a human right” at the launch of the Cabricanecos Campaign in early March. (JFREJ)

But there is still more to do. Lopez said he also helped file lawsuits against Best Super Clean for their labor practices; according to New York State Law, all workers are entitled to at least five sick days a year. Lopez also suspects the company has been retaliating against workers for attempting to organize — in addition to Escalante, Lopez said, five other workers have been fired without cause in recent months.

Another tactic Lopez had, though, was to partner with T’ruah and JFREJ. LWC and JFREJ had previously teamed up in 2015 to garner support for unionization efforts for workers of midtown’s B&H Photo, the Hasidic-owned electronics retailer. Maybe, he thought, if fellow Jews advocated for the workers, the owners of the company would hear their pleas in a new light.

The letter, addressed to Best Super Clean owners Joseph Jacobowitz, Benjamin Mehrel and Jacob David Segelbaum, was released at the announcement of the campaign in early May. Signed by 35 local rabbis, it quoted Deuteronomy: “You shall not abuse a needy and destitute laborer, whether a fellow Israelite or a stranger in one of the communities of your land.”

According to Goldenberg and Lopez, the plan on Wednesday morning was to drop off the letter and walk away. But during the meeting, the representative from Best Super Cleaning agreed to rehire the worker who had been fired last week, and expressed willingness to speak to the lawyers of the other workers who had been fired.

Best Super Cleaning declined to comment on the meeting to the New York Jewish Week.

Both Goldenberg and Lopez said the management also agreed to meeting with a representative from each construction team once a month to open dialogue and communication between workers and management. They also expressed interest in hiring bilingual supervisors for construction teams as well as holding better training for team managers.

In response, LWC agreed to not picket and hand out fliers in Williamsburg on Shabbat.

“The proof will be in the follow-up, but I’m optimistic,” Goldenberg said. She said LWC is planning to meet with Best Super Clean again in the coming weeks to check in on the progress.

“We depend on each other — our communities are also interconnected, and it’s just really meaningful to be a part of, of a campaign that is so local,” Goldenberg added. “As one of my colleagues said to the management, ‘It would be a real kiddush Hashem for the Jewish community to know that this Jewish-owned business is doing right by their workers.’”

Lopez — who noted on Friday morning that the worker management promised to rehire had yet to be contacts by his former bosses —  remains hopeful but skeptical. “Sometimes employers say things when under pressure but don’t follow through,” he said. “I think the company is very scared, that’s why they were open [to meeting]. I don’t know if they are just trying to repair their image.”

As for Escalante, he said he was touched to see how many New Yorkers were willing to stand up for him. “We’re immigrants, we’re Latino, we’re Hispanic. We need respect. We’re human beings too,” he said. “I’m very happy to know that I have the support of so many people that are able to actually help.”