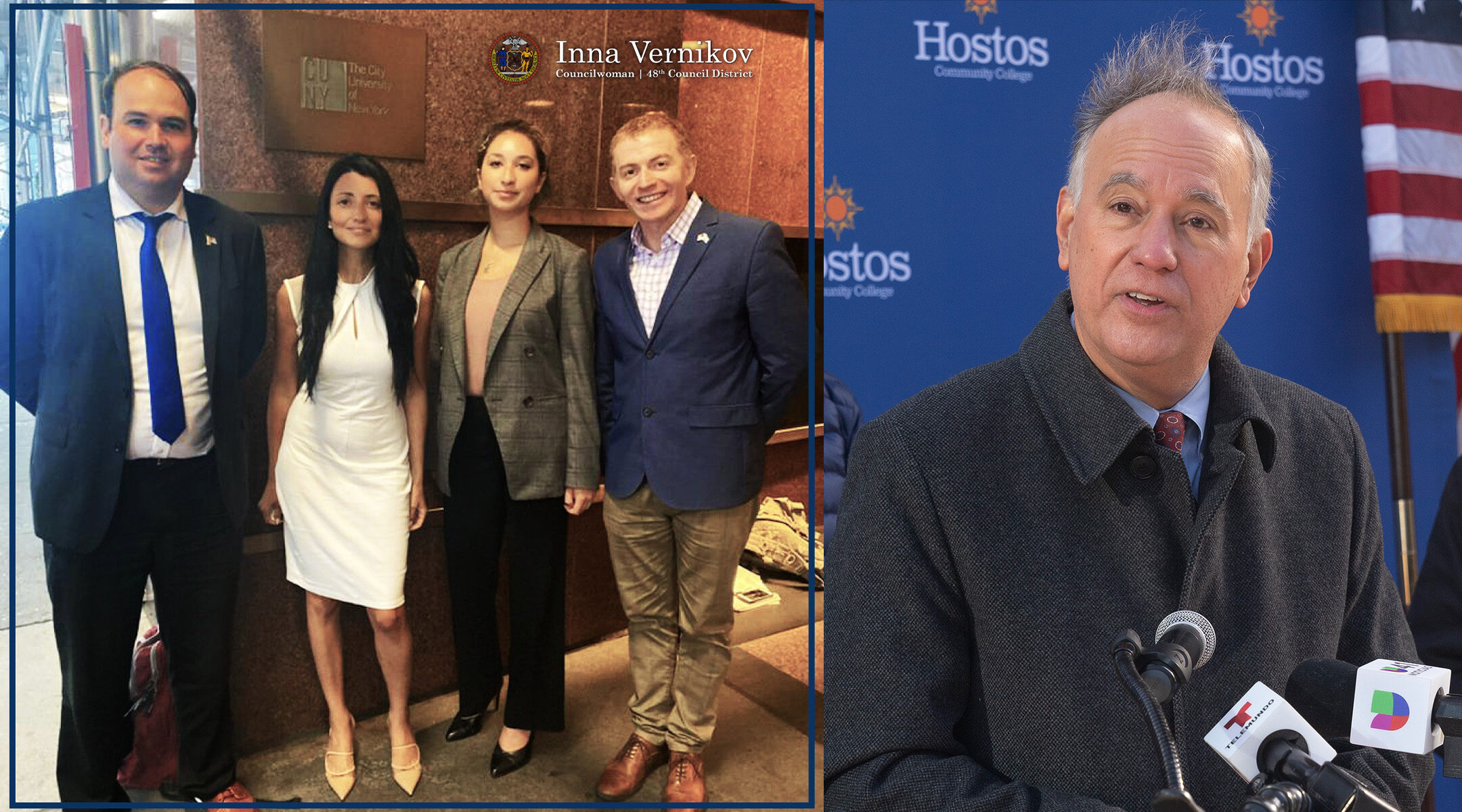 (New York Jewish Week) — Two weeks after declining to appear at a hearing called to address antisemitism within the CUNY system, the city university chancellor met with the City Council member leading the charge to get the school system to address complaints from Jewish students.

Inna Vernikov, a Republican from Brooklyn, told the New York Jewish Week that she had a “powerful and productive” meeting on Wednesday with Chancellor Félix Matos Rodríguez about antisemitism allegations at CUNY.

“I reiterated that by not showing up, it was an insult to the Jewish community,” Vernikov said. “But I don’t want to stick to the past, I want to move forward.”

Vernikov said that, during the meeting, Matos said CUNY will be committing to new Israel exchange programs and will include antisemitism in the system’s diversity and inclusion training.

Matos was not among the CUNY officials who took part in a June 30 City Council hearing, in which dozens of witnesses described the atmosphere on various CUNY campuses as anti-Israel and hostile to Jews. Vernikov previously called the chancellor “cowardly” for not showing up.

In recent years, students and faculty at CUNY-affiliated Baruch College, John Jay College of Criminal Justice, Queens College and Hunter College, among others, have said that anti-Israel resolutions passed by the system-wide faculty union, as well as an anti-Israel climate on their individual campuses, have crossed the line into antisemitism.

Councilmember @InnaVernikov says CUNY Chancellor not showing up for today’s antisemitism hearing is ‘an insult to the Jewish Community of New York.’ pic.twitter.com/S6MbfAZbWz

Vernikov said that CUNY originally offered her a Zoom meeting, which she said was “unacceptable,” in the wake of the June 30 hearing. But she added that the chancellor was “very receptive” and also “wants to move forward.”

When asked why he didn’t show up to the previous hearings, Vernikov said that Matos explained that “the chancellor doesn’t show up to hearings other than budget hearings.”

“I gave him enough slack,” Vernikov said. “They are already feeling the pressure.”

Vernikov also sent a letter to Matos, obtained by the New York Jewish Week, asserting that the testimony at the June hearing demonstrates that CUNY lacks an understanding of antisemitism and “has not adequately addressed this widespread problem.”

In the letter, Vernikov proposed a list of 10 commitments she would like to see CUNY implement, which includes sensitivity training, consequences for harassment and including antisemitism in CUNY’s anti-harassment training materials.

Vernikov also called for the adoption of the International Holocaust Remembrance Alliance’s definition of antisemitism across all CUNY campuses. Gov. Kathy Hochul issued a proclamation earlier this month endorsing the IHRA definition, which has been adopted by a growing number of nations and organizations but remains controversial among free speech and pro-Palestinian activists.

Vernikov added that the chancellor said that CUNY is already looking into adopting the IHRA definition. “It is something they are considering,” Vernikov said. “They will be speaking with the governor’s office about what the governor meant by her proclamation.”

Vernikov also brought to the meeting a representative from her office, a Jewish CUNY student and Ilya Bratman, executive director of Hillel at Baruch College.

“We were grateful for the time he gave us,” Vernikov said. “We are very hopeful that we will see some action from this meeting.”

CUNY did not respond to a request for comment, and has declined all previous requests for comment from the New York Jewish Week.