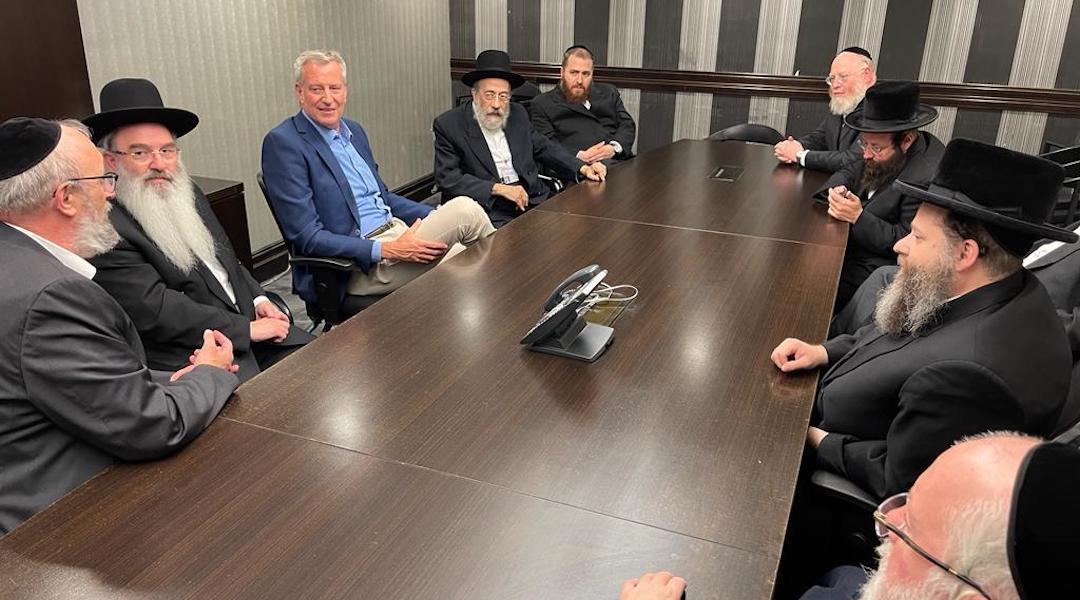 De Blasio said in a video he posted to Twitter that “people are looking for another option” for the district, which includes lower Manhattan and much of brownstone Brooklyn, including some Orthodox neighborhoods.

“Time for me to leave electoral politics and focus on other ways to serve,” he said in the video, following polling showing the former mayor near last place with only 5% of the vote, according to City & State New York.

The same poll showed Council member Carlina Rivera in the lead with 17% of the vote, and progressive Assembly Member Yuh-Line Niou in second with 14%.

De Blasio added that he had made mistakes in the past and wants to do better in the future.

“I want to learn from those mistakes,” de Blasio said. “It’s been a humbling experience at times.”

De Blasio debated running for governor this year, and had a failed presidential run in 2020.

At one point, it seemed that de Blasio was close to securing an endorsement from Borough Park Orthodox leaders, after apologizing for a tweet he made rebuking Jewish people gathering during COVID lockdowns in 2020.

In a video first published by Hamodia, de Blasio was seen being asked about the tweet. “It was a mistake and I shouldn’t have done it,” de Blasio said in the video. “It was a moment of passion and pain over what was happening in the city.”

Niou found herself in hot water last week when she told Jewish Insider that she supports the Boycott, Divestment and Sanctions movement targeting Israel.

“I believe in the right to protest as a fundamental tenet of western democracy, so I do support BDS,” Niou said.

Dan Goldman, who was the lead lawyer in the first impeachment of former President Donald Trump, is polling third with 12% of the vote.

Yitzchok Fleischer, a representative of the Bobov community, told the New York Jewish Week that he was looking at Goldman, who is Jewish, as a second choice after showing support for de Blasio last month.

Goldman, however, is in hot water after telling the Orthodox Jewish newspaper Hamodia that he wouldn’t object to certain restictions on when an abortion might be performed. Rival candidates slammed him, and he walked back his statement Tuesday, saying, “There is no room for government involvement [in abortion] at any point in time, for any reason.”

Former U.S. Rep. Elizabeth Holtzman, who is also Jewish, is polling at a surprising 9%, making the Jewish candidates still competitive players in the primary. Holtzman, 80, served in Congress from 1973 to 1981.

Rep. Mondaire Jones, who is both a progressive and pro-Israel, is still in the fight, polling at 7%, and has a $3 million war chest, according to City & State New York.

The 10th district was previously represented by Rep. Jerry Nadler, the sole remaining Jewish House member representing New York City. He is in a fight for in the newly redistricted 12th against the longtime incumbent Rep. Carolyn Maloney.

The Democratic primary for the Congressional seat in District 10 will take place on Aug. 23.