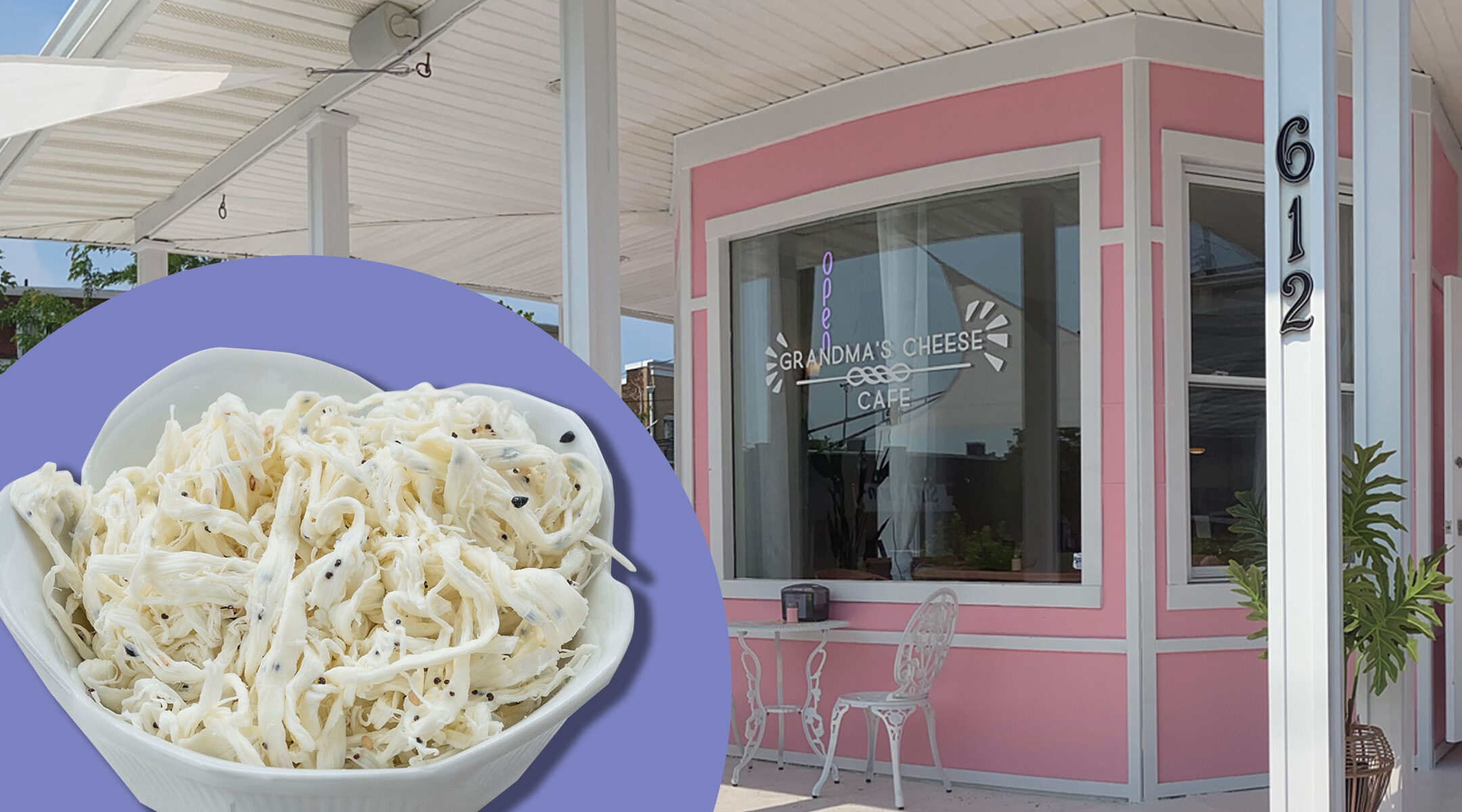 (New York Jewish Week) — Florence (Zeitouni) Cohen grew up in Brooklyn eating string cheese. Not the rubbery Polly-O cheese sticks that you can buy in any old supermarket, though. She means the string cheese of her youth, which she now feeds her 2-year-old daughter: a smooth, spongy and semi-soft mild cheese that is a staple of the Syrian Jewish community.

“Everyone has string cheese in the refrigerator,” said Cohen, referring to the sizable Syrian Jewish communities in Brooklyn and Deal, New Jersey, where she and her young family moved two years ago.

Most Americans think of string cheese as a convenience food, something parents toss to their kids as they hustle from one activity to the next. But if Cohen, 27, has her way, Syrian string cheese will soon become a staple of the broader Jewish American diet. Drawing upon her grandmother’s string cheese recipe, Cohen launched a kosher food business, Grandma’s Cheese, in 2013. Cohen started by delivering homemade string cheese in Midwood, the Brooklyn neighborhood where she was born and raised; these days, she has 16 products that are sold in 30 stores across the Tri-State area and beyond. She also operates Grandma’s Cheese Cafe in Long Branch on the Jersey Shore.

“String cheese says comfort and love,” Cohen told the New York Jewish Week. “I saw an amazing product that was hard to make and I said, okay, let me make it. Let me make something valuable that people actually want.”

A cross between mozzarella and halloumi, Syrian string cheese, as the name implies, is stretched, twisted and strung as it is made. According to Benita Kasbo, the owner of Kasbo’s Market, a Middle Eastern specialty cheese company in Madison, New Jersey, all Syrians — Jews, Christians and Muslims alike — consider string cheese a staple of their diets. Known in Arabic as jibneh shelal, or braided cheese, it is often studded with black nigella or caraway seeds. It can — and should be — separated into strings before eating.

It’s a staple at brisses as well as for seudah shlishit, the third Shabbat meal during which lighter meals are traditionally served.

“If you peek into any [Syrian Jewish] preschool or grade schooler’s lunch box, you will find pita, string cheese and cucumbers,” said Sylvia Fallas, a cook, recipe writer and educator who grew up in Brooklyn’s Syrian Jewish community. “It’s a go-to meal. They love it.”

Cohen is no exception. “It got me out of bed in the morning,” she said. “I went to yeshiva and had to get out of bed super early every day. I hate waking up early. But I said, ‘Okay, I’m excited to have my string cheese and bagel.’”

When she was 17, Cohen learned how to make string cheese from scratch. Her grandmother, Moselle Tobias — who was widely known in their local Syrian Jewish community for her cooking prowess — gave a class in 2013 at the Sephardic Community Center in Midwood on how to make the dairy staple. She asked Cohen, her eldest granddaughter, to assist her.

By the end of the night, Cohen was hooked. She was excited about the process, which she describes as “grueling,” and proud of the final product. Cohen soon announced she was going to start Grandma’s Cheese as a tribute to the family matriarch. Within six months she was delivering homemade string cheese to some 50 local families on Friday afternoons, and the business grew from there.

Cohen isn’t the only Syrian string cheese entrepreneur in the New York area. Jane Choueka began her small string cheese business — String Cheese by Jane — out of her home kitchen in Brooklyn about 12 years ago. “I started making string cheese for my friends,” said Choueka. “I gave it to them and they said, ‘why don’t you sell it?’”

Choueka now makes eight flavors, including pesto, truffle, olive and za’atar. Her products are certified kosher by HomeKosher, a certification service for boutique vendors. She sells most of her products from her home and some via Kosher Valet, a purveyor of small batch, homemade kosher foods.

According to Joe Danziger of Kosher Valet, who sells several brands of Syrian string cheese, Grandma’s Cheese, certified kosher by the Jersey Shore Orthodox Rabbinate, is the most popular string cheese vendor on his site. “It is all about the generation-to-generation recipes,” he said. “People want that homemade, small batch feel of everything versus the commercial cheeses on the market.”

After the initial success of her food business, Cohen took a break to attend Hunter College in Manhattan. But the calls for her cheese kept coming in. In 2017, she started Grandma’s Cheese back up again —  though this time around, the intensity of making the cheese at home and delivering it to her customers took a toll. Her father and her husband, Maxie Cohen, helped her find a commercial kitchen and “land her first store” to sell her product.

“In five years,” says Cohen, “I went from selling out of my mom’s kitchen to selling 1,000 pounds a week to 30 stores in Brooklyn, Manhattan, New Jersey, Florida and Panama.”

In 2020, the Cohens opened Grandma’s Cheese Cafe in Long Branch. The location is close to the Syrian Jewish community in Deal, though the couple also hoped a restaurant would reach people outside the community.

Cohen describes the 3,000-square-foot restaurant as a “pink wonderland” — Miami Beach meets the Jersey Shore. With items like panini and grilled cheese, it’s designed to showcase Grandma’s Cheese. There are nods to more modern, millennial tastes, including several varieties of avocado toast.

The Cohens hope that their restaurant will turn non-Syrians on to the versatility of this delicately flavored cheese. “We feel that we just have to get it into people’s mouths,” Cohen said. “Then the rest will follow.”