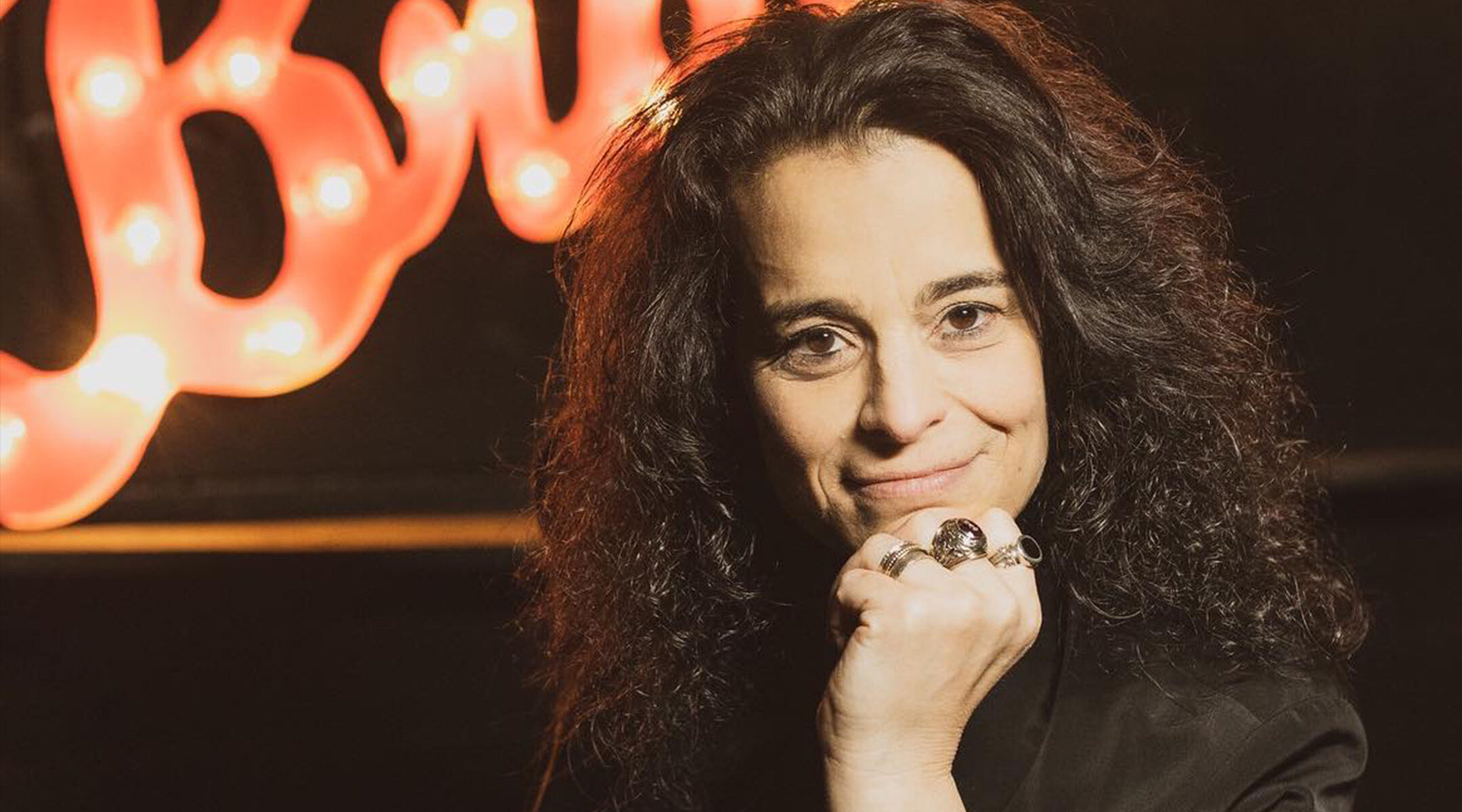 New York comedian Jessica Kirson, enjoying a breakout moment after putting in years at the craft, is performing at The Chosen Comedy Festival in Coney Island on Tuesday, Aug. 16. (Courtesy)
Advertisement

“I’m constantly complaining,” she added by way of explanation.

While that may be true — in her 23 years in comedy, Kirson has made a name for herself doing less-than-charitable impressions of family members and riffing on how life is horrible —  the 52-year-old Jewish mom also called this reporter a “sweetheart” during a 15-minute conversation.

A mainstay at the Greenwich Village’s legendary Comedy Cellar, Kirson — who grew up in South Orange, New Jersey and calls herself a “proud Jew” — is having a breakout moment thanks to viral clips on social media where she masterfully battles hecklers. “I’m working on an all crowd-work special right now,” Kirson said. “No woman has ever done one before.”

According to Dani Zoldan, owner of another leading New York comedy club, Stand Up NY, Kirson is “really one of the funniest comedians working today. And she has so much respect amongst comics, too.”

She’s recently been a guest on “The Howard Stern Show” and most major comedy podcasts, including “The Joe Rogan Experience.”  On her own podcast, “Relatively Sane,” she’s interviewed comedy heavyweights like Bill Burr, Jim Gaffigan and Rosie O’Donnell.

Her own full-length special, “Talking To Myself” premiered on Comedy Central in 2019, and she has a featured performance on Burr’s “Friends Who Kill” comedy special on Netflix.

In 2021, she produced a feature-length film with FX called “Hysterical” about women in comedy, which features Nikki Glazer, Margaret Cho, Chelsea Handler and others. It’s streaming now on Amazon Prime video.

Next up, Kirson will be performing at The Chosen Comedy Festival in Coney Island on Tuesday, Aug. 16, a show produced by Zoldan. It features an all-Jewish lineup of comedians and musicians including Alex Edelman, Leah Forster, Laivy Miller and more.

Before the festival, the New York Jewish Week caught up with Kirson to talk about her Jewishness in her life and comedy, and what it takes to make it in such a male-dominated field.

New York Jewish Week: You are a New York-based Jewish comic. Can you describe what that translates to on stage?

Jessica Kirson: I bring a lot of New York flavor into my comedy and I talk about being Jewish a lot. I’m really proud to be Jewish, and I think it’s important to talk about. I do a lot of characters in my act, and I act out my Jewish family and my Jewish grandmother and all her friends, and people love it.

I do a lot of clubs around the country, and I talk about being Jewish in my set. It’s important because a lot of people in this country don’t know about Jewish people. They’re clueless, and they’re uneducated, and I feel like I really teach them a lot about our culture, and who we are. They really learn a lot about us through my comedy.

And then also, a lot of them do know about us, and they love it and they relate to it. A lot of Jewish people around the country love when I come to the clubs in the area. They love seeing a Jewish comic perform because they might have these small Jewish communities, like in the South or in the Midwest, and they’ll come up to me after the show and be so excited to talk to me. It’s become a very big part of my act.

But it’s also very upsetting to me, just all of the hate out there, and what has gone on obviously for so many years, for forever, since the beginning of time, and what’s going on now and how bad it’s become. I feel like I need to put out a message on stage and educate people and address it and not stay silent about it. I can do that through humor and it’s very powerful to talk about it.

There’s also an element of sweetness in your performances, like a Jewish mother who’s just had it and is letting it out all out on stage. Is that a fair interpretation of your comedy?

Yes. I have four children — I definitely have that in me. It’s also on purpose. It’s a way of saying things that are so intense and powerful in a way that’s disarming. I say these things that could put people off, but I do it in a very loving way so that people don’t get turned off. I can come off likable, and they’ll be willing to hear it and be open to it. I do it on purpose that way.

I think it’s important to talk about what’s like being a woman in comedy — a typically male-dominated industry. You’ve had a good amount of success, that continues to grow with your social media, your specials, and you are appearing on podcasts all over the place. How do you think you did it?

That’s a good question. I am seen as a comic, and not a female comic. A lot of male comics say that. I purposely appeal to men and women. I don’t do jokes about being a woman at all, and that’s on purpose. I know that it’s very important to do material that men will laugh at and want to hear because 50% of the audience is men, and a lot of the industry is run by men. In fact, most of it is, so it’s crucial to do material that men will understand and relate to.

And, thank God, I was born with this ability to present myself on stage in a powerful, confident way that’s assertive, that could be called male. I don’t come off as insecure or timid or nervous.

It’s very important to come off with a “don’t screw with me” kind of attitude. It’s crucial to be like that as a female comic, because the minute you go on stage as a woman, they’re thinking, “you’re not funny.” That’s the first thing they’re thinking. You have to prove them wrong immediately.

And I’ve just worked really, really, really hard. I think that when people see me, they don’t even think about gender, they just think, “this person’s funny.”

What’s the most Jewish thing about you?

I complain from the second I open my eyes. In my head, I’m just negative. I usually look at the worst-case scenario. I have stomach problems constantly. Every day, I just work on trying not to be negative. I was brought up in a family where everyone was always anxious and negative and worried and so that’s the work I’ve had to do. I try to not be like that with my kids, to try to break the pattern. That’s really the Jewiest thing about me.

The New York Jewish Week is the media partner for The Chosen Comedy Festival. For tickets and information click here.