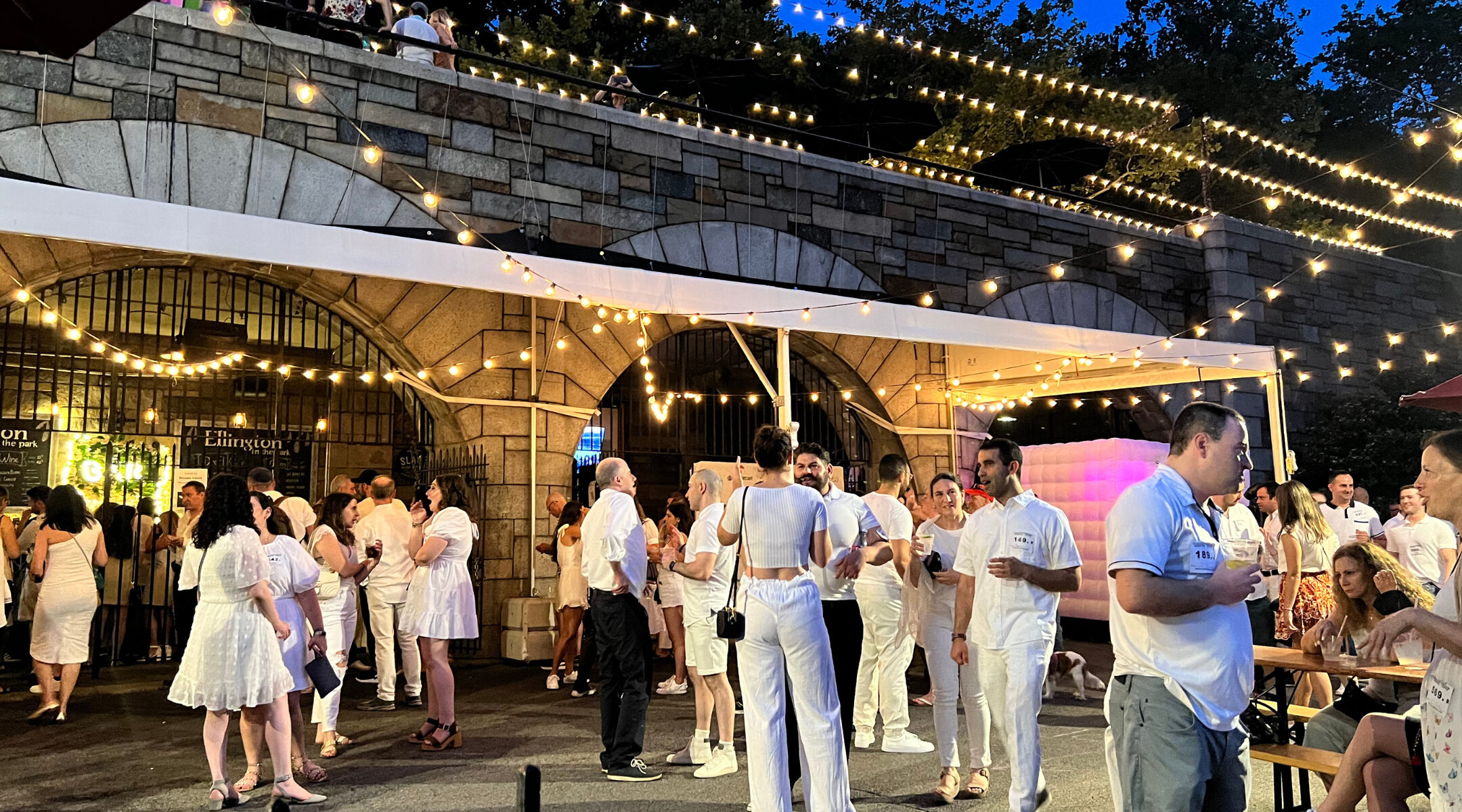 (New York Jewish Week) — How do you stand out when everybody’s dressed in white?

On Thursday evening, nearly 700 Jewish singles in their 20s, 30s and 40s gathered in Manhattan’s Riverside Park to celebrate Tu B’Av, a minor holiday often referred to as the “Jewish Valentine’s Day.” As requested by the organizers, everyone in attendance wore white — but people interpreted the assignment differently. Many women wore trendy, designer dresses, doing their best to look elegant and put together. Some of the men, meanwhile, wore white, wrinkled polo shirts.

This was Bangitout.com’s first Tu B’Av White Party since before the pandemic began. Had COVID-19 not upended, well, everything, it would have been their 20th annual Tu B’Av shindig. Instead, it was an auspicious 18th convening of the summer event uniquely designed for Jewish singles in the greater New York area.

Founded by brothers and Yeshiva University alumni Isaac and Seth Galena in 2001, Bangitout started as a way to share Jewish content online. Over the years, it grew into a platform known for advertising kosher apartment shares, kosher restaurants and shiurim (lectures). They also became known for hosting signature Jewish events, like “Sukktoberfest,” a hybrid Sukkot and Oktoberfest party. 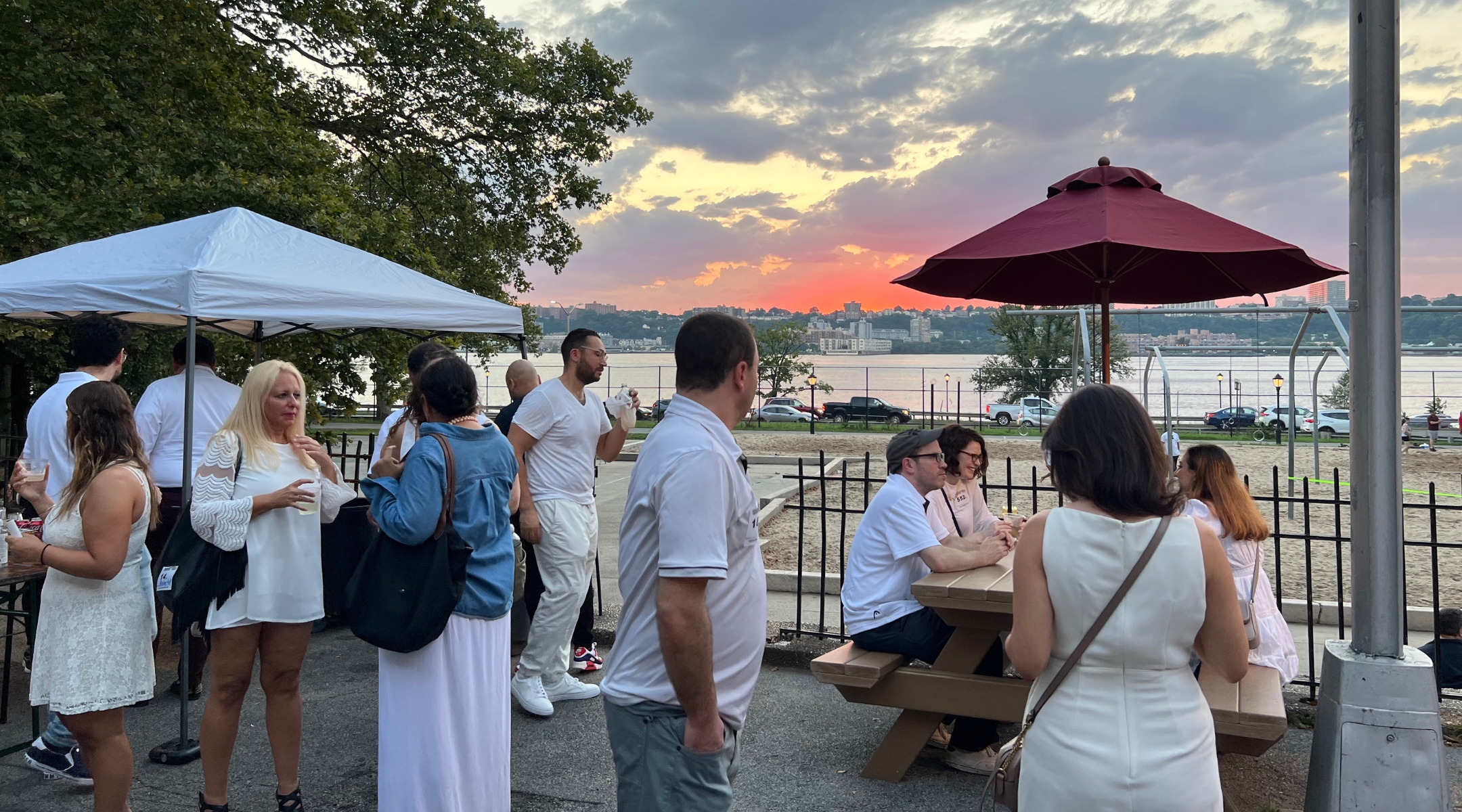 As for Bangitout’s other major annual event, the Tu B’Av White Party, it “simply enables singles to cut the crap and actually meet someone to marry,” according to the organizers’ marketing materials.

The Galenas claim nearly 50 couples who originally met and have gotten married through one of their parties. One couple, who met at the 2012 Tu B’Av White Party, got engaged at the same event the following year.

“These guys are the real deal,” Jordan, a lawyer and freelance writer at Bangitout.com, told the New York Jewish Week about the Galenas.

“You can really see the evolution of life through these parties,” he observed, referring to the matches — and subsequent families — that were made over the years

In fact, the Galenas’ own sister, Sarah, met her husband at a Tu B’Av party in 2008 — something she briefly demonstrated to a reporter by pulling out her phone and FaceTiming with said husband and their child.

Thursday’s White Party, like many singles events, employed a numbered matching system — everyone wears a sticker with a number on it, and a person can write down the number of someone they are interested in and place it in a large bucket. If the other person writes down their number, too, the pair will be set up on a date.

Still, some in attendance urged partygoers to flout the rules: Leora Schiffman, a matchmatcher, event promoter and founder of Leora’s List, encouraged singles to simply ask one another for their phone numbers, old-fashioned style.

“What’s the worst that could happen?” she asked. 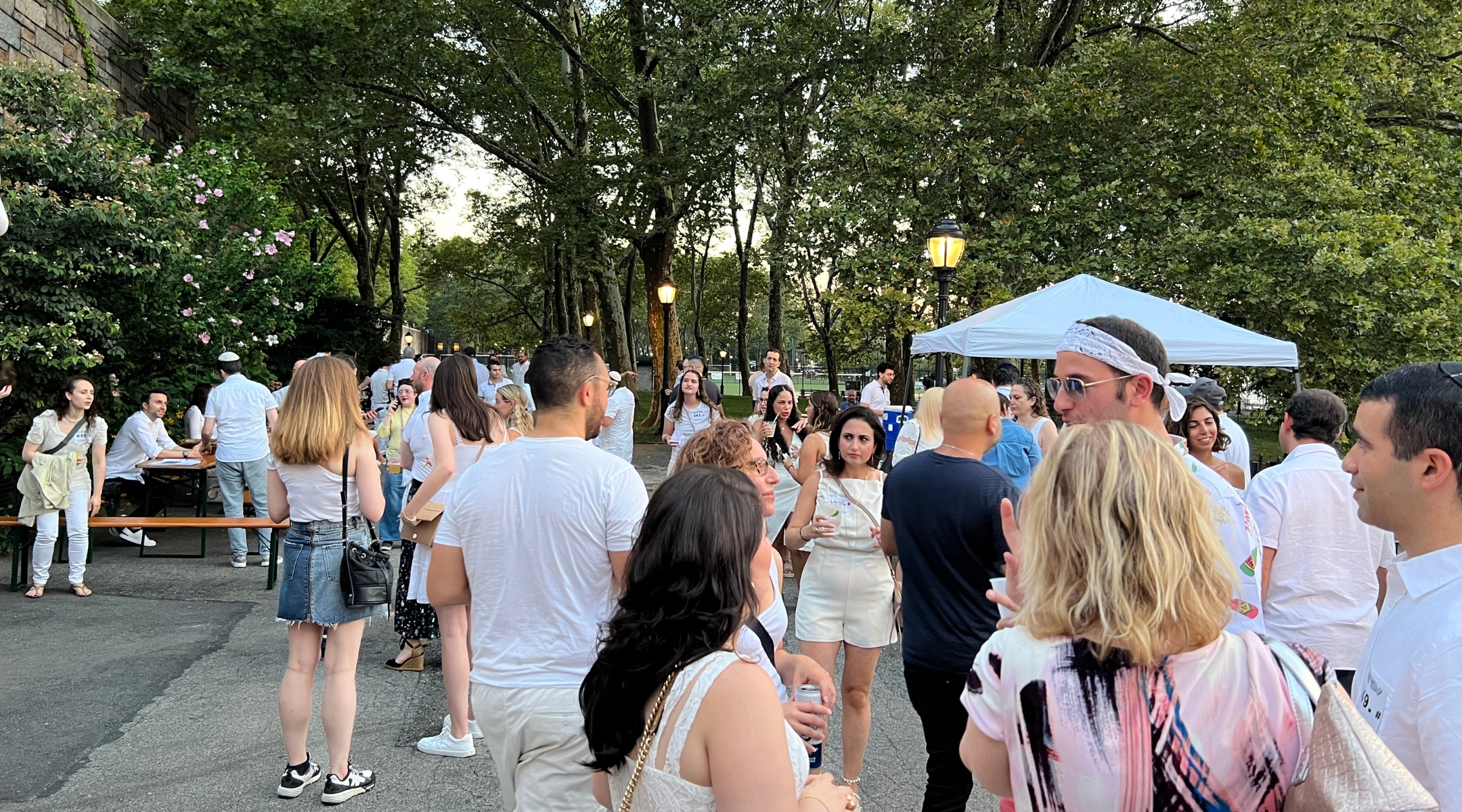 The annual Tu B’Av White Party, hosted by Bangitout.com, is a singles event for Jews in their 20s, 30s and 40s. (Jackie Hajdenberg)

As the sun set over the Hudson River, tipsy singles took turns in the photo booth, refreshed their drinks at the bar, or listened to pitches from party sponsors, like Blink Date, a new audio-first dating app, or JScreen, a Jewish genetic screening service. Others pursued their mission single-mindedly: They were here to meet someone.

Two sisters from Flatbush, both in their early 20s, shied away from the crowd. They took seats at a picnic table, preferring to focus on their drinks and each other rather than approach a stranger.

But that’s OK, because a friendly stranger approached them instead. Howard — a young man from New Jersey wearing a white polo, navy pants, gray baseball cap and black, rectangular glasses — told the sisters why white is worn on Tu B’Av, when unmarried women in the Second Temple period would dance in the vineyards at the beginning of the grape harvest. “You wear white so you can’t tell the difference between a rich girl and a poor girl,” he said.

Historically, women would swap clothes so that even those who could not afford a new white dress would not be embarrassed on Tu B’Av. Here in New York, the singles aren’t quite dancing in the vineyards, but they did appear to be enjoying themselves in the public park — perhaps even paying an unconscious tribute to the grape harvest by grabbing a glass of wine. Overheard conversations ranged from women trying to rescue their friends from close-talking interactions with uninspiring men, to discussions on topics that veered from TV to antisemitism.

“I stopped watching ‘Chicago Med’ because I heard one or two of the main actors are antisemitic,” one young woman said to a new male acquaintance, both clutching drinks.

An older man in attendance, maybe in his late 40s, also dressed in white, didn’t come alone: He nonchalantly walked his Cavalier King Charles Spaniel through the crowd. Upon closer inspection, however, the dog, named Chicken, was also looking for love — she wore a number sticker, too. 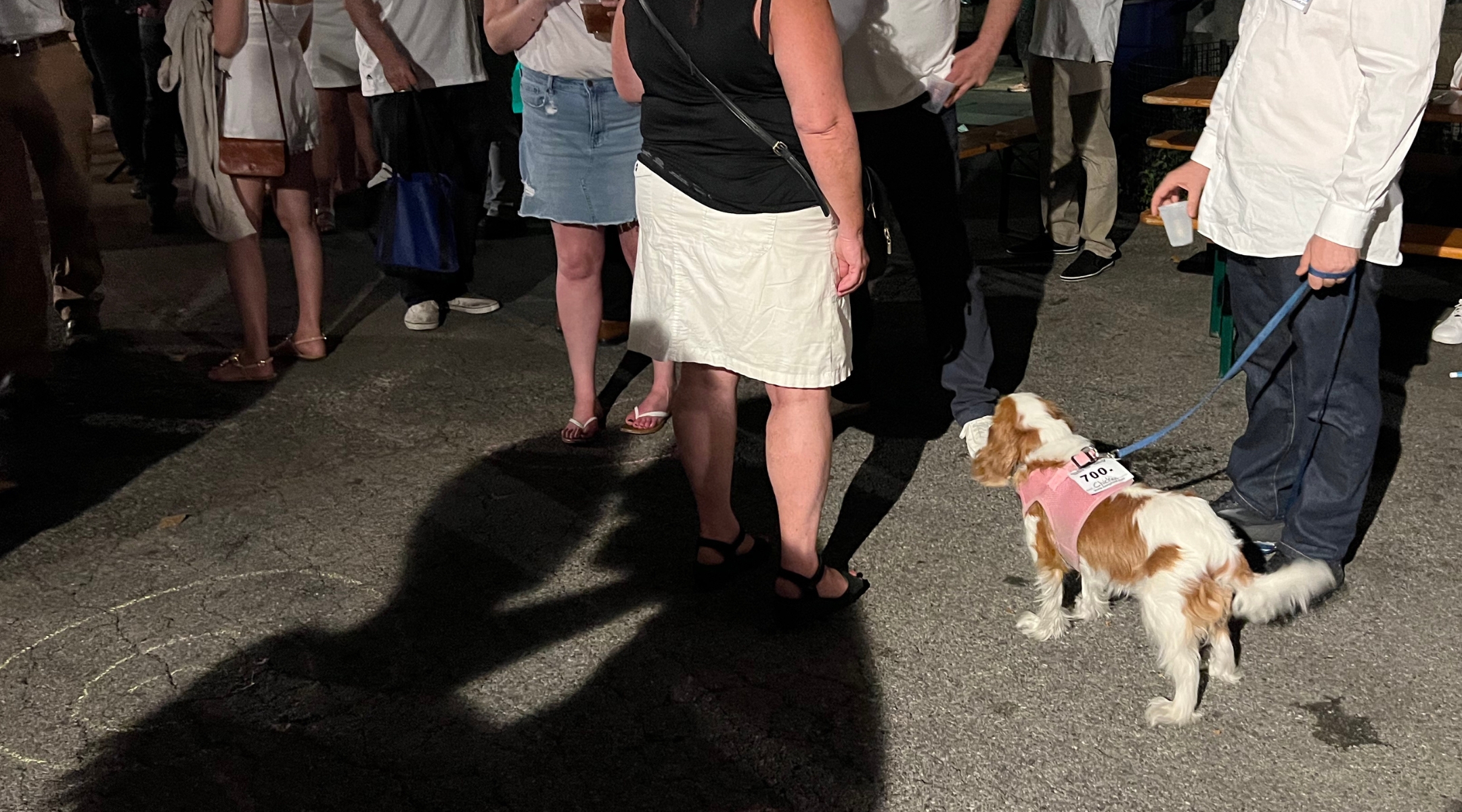 Even the dog was looking for love! (Jackie Hajdenberg)