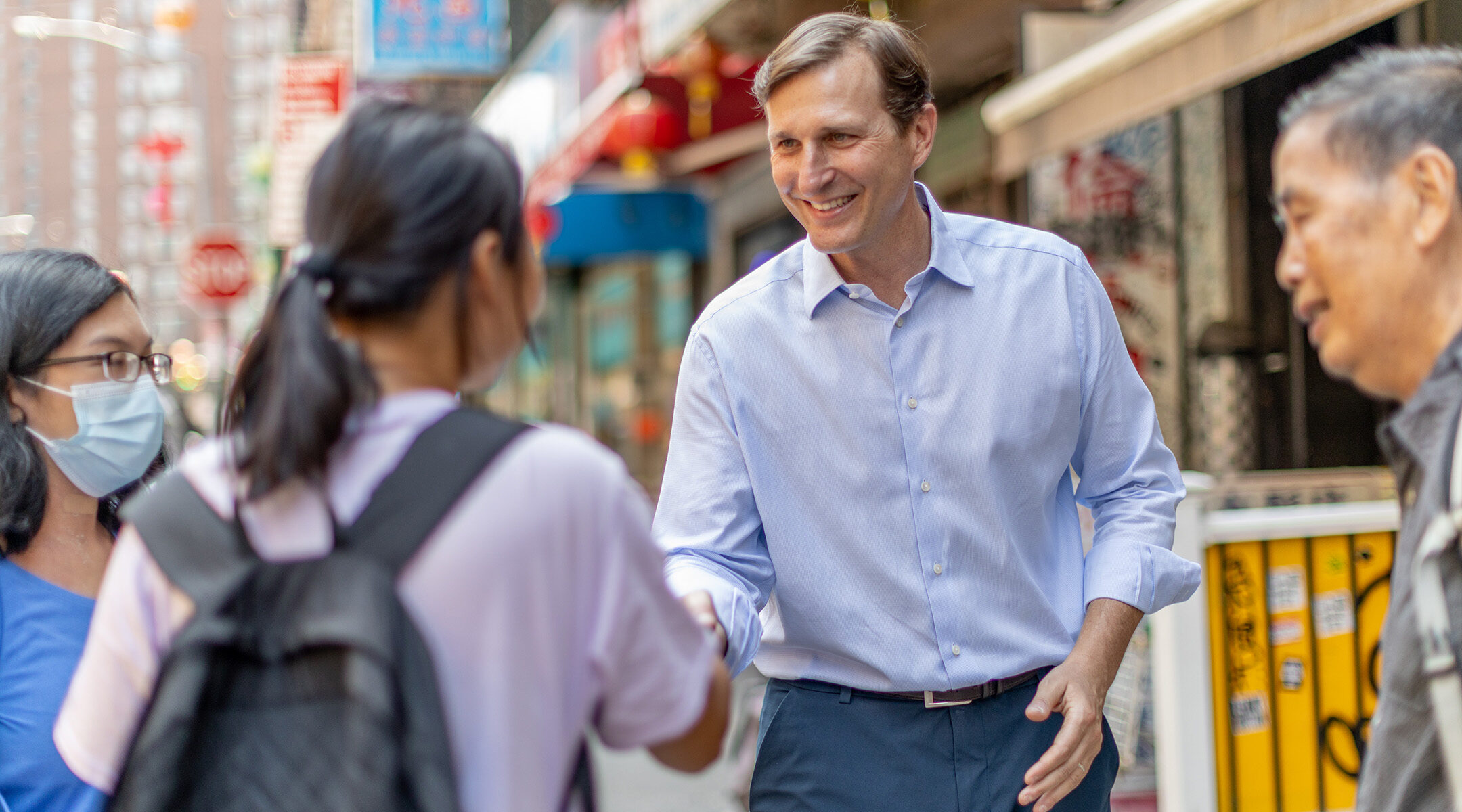 Jewish attorney Dan Goldman is facing new attacks about his financial record as frontrunner in the race for a congressional seat in New York's District 10. (Courtesy)
Advertisement

(New York Jewish Week) — As director of investigations for the House Intelligence Committee, attorney Dan Goldman made a name for himself in 2019 as the lead counsel for the first impeachment inquiry against former president Donald Trump.

That inquiry — which accused Trump of abusing power by withholding military aid to Ukraine while he pressed the country to investigate the Bidens — ended in acquittal.

Yet Goldman believes the fight against the Republican standard bearer is far from over, saying that is why he is setting his sights on New York’s 10th Congressional District, where a crowded field is vying for the Democratic nomination for a rare open seat that includes Lower Manhattan and parts of Brooklyn.

Goldman, 46, certainly has the Jewish pedigree to match the district — which includes both liberal Park Slope and heavily Orthodox Borough Park. What’s more, he told the New York Jewish Week, his Jewish values are what inspired him to run for office. “I have a desire through my Jewish values to give back and make this world a better place,” he said.

Goldman said these values took root when he was a law student at Stanford University, where he wrote about the Jewish involvement in the Civil Rights movement.

In his first run for elected office, Goldman is the frontrunner in the race, polling at 22%, according to the latest polls, with fresh endorsements from both The New York Times and leaders of the Bobover Hasidic movement, a major player among Orthodox Jewish voters in Borough Park.

According to a statement from Rabbi Joel Rosenfeld, director of government affairs for Bobov, the movement endorsed Goldman because he has Orthodox family ties and is “a strong supporter” of the community.

“I will certainly be a strong advocate for the Orthodox community, to ensure that they are given the same opportunities to flourish as every other community in this district,” Goldman said.

Goldman was raised in Conservative Jewish family in Washington, D.C.; his grandmother fled from Russia due to antisemitism in 1921. His grandfather, Richard Goldman, was a billionaire philanthropist in San Francisco and one of the founding supporters of Birthright, the program that brings American youth on free trips to Israel. His grandmother, Rhoda Haas Goldman, was the daughter of the president and chairman of Levi Strauss & Co., the blue jeans empire.

These days, Goldman is raising three kids in Tribeca in a “Modern Orthodox way,” as he describes it, with his second wife, Corinne Levy, who grew up Orthodox and studied at a yeshiva. He and his family are active at Congregation Magen David in Greenwich Village and Chabad Tribeca, where a daughter goes to Hebrew school, as well as the Jewish Community Project, the nondenominational congregation in Tribeca where his youngest children went or currently go to preschool. His wife also serves on the synagogue’s board. He also has two children from his first marriage.

Goldman is a strong supporter of Israel, which, according to responses he gave to a questionnaire distributed by the Jewish Community Relations Council of New York, he considers a “democratic beacon in the Middle East.” Israel became an issue in the campaign after another District 10 candidate, State Assembly member Yuh-Line Niou, said last month that she supports the Boycott, Divestment and Sanctions movement targeting Israel, explaining that she believes “in the right to protest as a fundamental tenet of western democracy.” (In the Aug. 15 JCRC questionnaire, however, when asked if she supports BDS, she answered simply, “No.”)

Goldman supports a two-state solution in Israel, saying that a secure state for Israel and a demilitarized state for Palestinians is the only means to ensure that Israel remains both a democracy and a Jewish state. He worries, however, that the Israeli government has moved “too far to the right.”

“Palestinians need to disavow any violence and show that they will not engage in violence,” Goldman told the New York Jewish Week. “But Israelis should take steps to stop and reduce settlements in the West Bank for the same reasons.”

“I don’t agree with the fundamental premise of [cash] bail, which is that people should not stay in jail because they can’t pay bail,” Goldman said. “That clearly has a disparate impact on those who are poor, who are disproportionately people of color.” In law school he contributed on “The New Jim Crow” by Michelle Alexander, a book about the racial inequalities within the criminal justice system.

Still, Goldman, who served as a prosecutor in U.S. Attorney’s Office for the Southern District of New York in Manhattan, said he opposes any defunding of the police and called for a “zero tolerance policy on hate crimes.”

“If elected, I would propose to add sentencing enhancements for any crimes where the prosecution can prove that there was a discriminatory motive,” he said.

Goldman attributed the rise in hate crimes to the “racist and xenophobic rhetoric of Donald Trump,” saying that the former president has “infiltrated the psyche of the American people in a divisive and polarizing way.

“I don’t think it’s a surprise that antisemitic and Asian hate crimes have risen over the past eight years,” Goldman said. “It coincides with Trump’s emergence.”

The rest of the candidates are closely behind Goldman. Niou is at 17% of the vote, while Council member Carlina Rivera and Rep. Mondaire Jones — a Hudson Valley House member running in the newly redrawn district — are at 13%. They are now sharpening their political attacks against Goldman as the race goes closer to the finish line.

Those attacks are pointed at Goldman’s finances: As an heir to Levi Strauss, a $7.3 billion company, he has been able to pour millions of his own money into his campaign, a luxury other candidates cannot afford. If elected, Goldman would be one of the richest members of Congress.

“I’m very grateful and appreciative of the opportunities that my ancestors have provided for me,” Goldman said. “That is the principal reason why I have committed and devoted my life to public service.”

“I strongly believe that we should reform our system to get all that out of the system,” Goldman said.

Without naming names, Goldman noted that other candidates have raised money from special interest groups, and put his own money into the campaign to “help get the message out.”

“I wanted to spend more time speaking to voters rather than donors,” Goldman said. “I will be beholden to no donor and no special interest.”

And yet, Stephen Ross, the Hudson Yards real estate giant who was one of Trump’s largest donors, has also donated to Goldman’s campaign for Congress.

Goldman’s House Ethics Committee financial disclosures from 2021 and 2022 show that he owns stock in one of the country’s leading firearms manufacturers, Ruger Guns, as well as News Corp, the company behind the right-wing media titan Fox News.

“I have been a blind trust for almost 10 years,” Goldman said of his investments. “None of my stock positions would ever have any influence on my representation. I am certain that if anyone looks at my entire career in public service, they will have no doubts that I have always done the right thing.”

He added that he has been “one of the strongest opponents against Fox News” and has called for investigations against gun manufacturers.

On Monday, Jones and Niou held a joint press conference, calling Goldman a “conservative Democrat” and  criticizing his financial record. “Our district can’t be represented by someone who gets a dividend check every time a mass shooter buys an AR-15,” Niou said. “New York’s 10th Congressional District cannot be bought.”

.@yuhline and @MondaireJones both arguing @danielsgoldman is a “conservative Democrat” who doesn’t fit the ideals of the district. @yuhline adds: “We’re standing with the people, and it’s disappointing more candidates in this race can’t make that commitment.” pic.twitter.com/OlMBNl8yxW

Jones has also released an attack ad calling out Goldman’s stance on abortion, referencing an interview in July with the Orthodox Jewish newspaper Hamodia, in which Goldman appeared to say he would be okay if a state were to ban abortions after viability. Later in the same interview, after consulting with an aide, he said that “my personal views on the termination of pregnancy are secondary to the right of a woman to make the decision about a pregnancy herself.”

Still, Goldman said that his campaign’s positive message is “clearly resonating” with the voters of the district.

“People really do seem to understand that although we have many important priorities in this district, the first priority has to be to defend and preserve our democracy and our fundamental rights,” Goldman said. “I will be a zealous advocate, both for democracy, but also for them.”