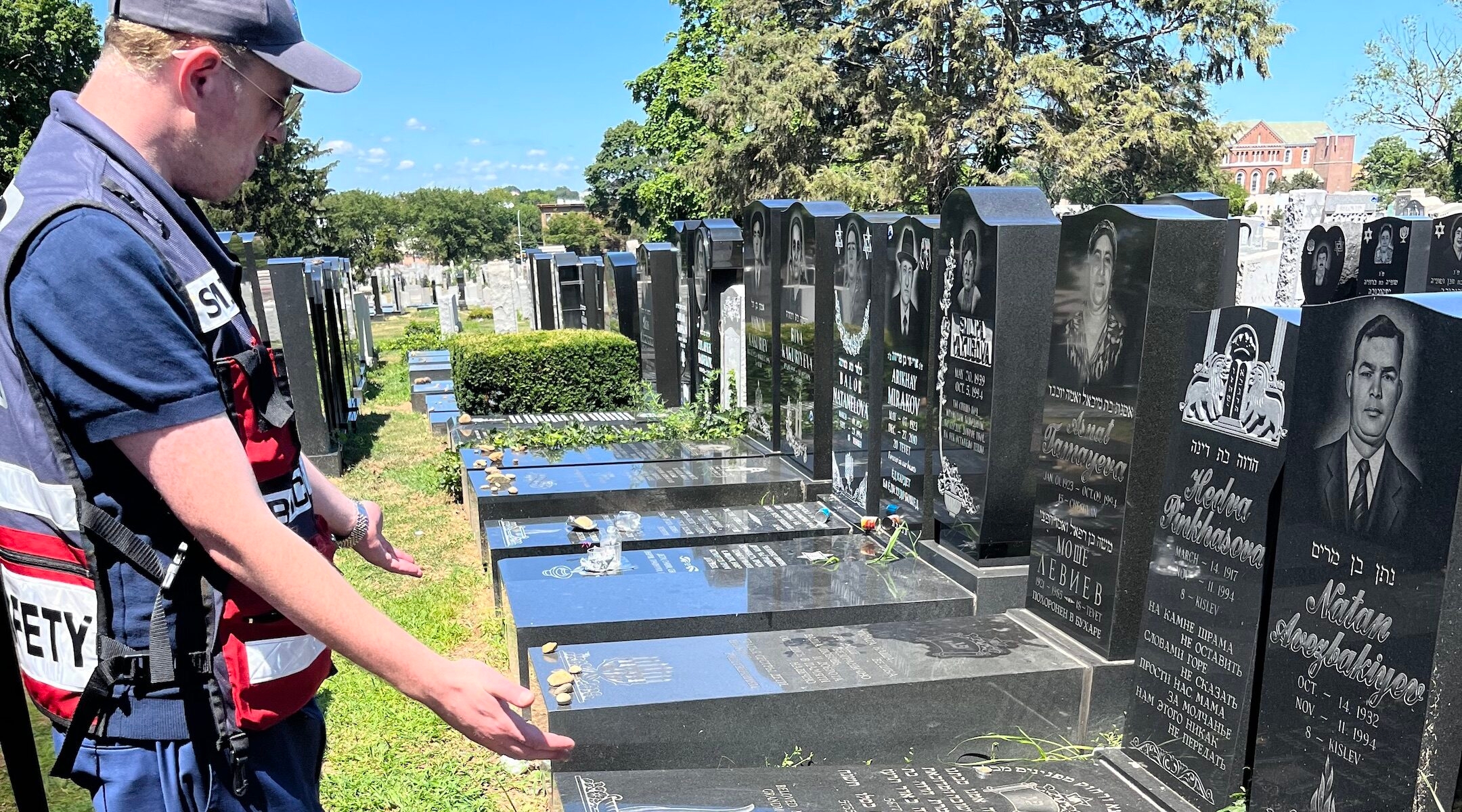 Leaders of the community, whose members immigrated from Central Asia, have held a rally and backed legislation demanding that cemeteries take responsibility for damaged graves.

The wave of activity began after an April 2020 funeral in which workers at Mount Carmel Cemetery damaged an existing grave, then made the family foot the bill for repairs. The incident kicked off allegations of sinking graves and shoddy care at the historic cemetery, the resting place of a number of notable Jews as well as members of the religiously observant, Russian-speaking Bukharian community.

A rally in Glendale, Queens, in August drew dozens of protesters, who are seen in a YouTube video holding signs in English and Russian reading “Stop atrocities” and “The bodies can’t scream.” The rally took place on Tisha B’Av, a fast day considered the saddest day on the Jewish calendar.

Two Queens lawmakers have introduced legislation in Albany that would require cemeteries to expand insurance to cover repairs, rather than charging families.

“I think this is the first time in history when the Bukharian Jewish community in New York is able to not only advocate and hold a rally, but push a bill and try to get this taken care of on a state level,” said Manashe Khaimov, a history professor at Queens College who studies in the history and culture of Bukharian Jews.

The current dispute dates back to April 2020, when community members noticed sinking graves, damaged coffins and cracked gravestones at Mount Carmel Cemetery in Queens. At the time, cemeteries across the New York area were operating at unusual pace as they struggled to accommodate the bodies of people who died in the early days of the COVID-19 pandemic.

At a Bukharian woman’s funeral, cemetery workers using a backhoe to dig a new grave next to her husband’s hit the cement container of the husband’s grave, creating holes in its foundation, according to Shabsie Saphirstein, a writer for The Queens Jewish Link and other local newspapers. The family saw their father’s grave being destroyed, then were made to foot the costs of the reburial, he said — a trauma made worse because Judaism allows exhumation only under extraordinary circumstances.

“You can only imagine the experience,” Saphirstein said.

Concrete liners are commonly used in graves to prevent them from sinking as coffins decompose; they also allow cemeteries to use heavy machinery to dig graves. New York does not require concrete liners and requires cemeteries that require them to waive the requirement when families present a religious objection, as long as they agree to pay for upkeep as graves settle.

Jewish tradition calls for burials to take place under conditions that allow bodies to decompose naturally, and some Jews choose a perforated liner to facilitate decomposition.

The Bukharian activists worry that cemetery engineers are not using enough concrete to protect coffins, especially when backhoes are used to dig graves. They want the cemetery to notify family members when damage occurs and to pay to have any issues fixed as part of its agreement to provide perpetual care for graves.

“Every week, they move the appointment,” said Danielov, whose brother is buried in the cemetery. “After postponing it a third time, they said, ‘Season over. Come next year.’”

“For the last two years, Cemetery management has met with a small group of representatives from the Bukharian Community regarding specific complaints concerning cemetery operations,” Namias said.

She noted that backhoes are essential to fulfilling the Jewish tradition of speedy burials. “It is imperative that [a] backhoe be used when possible for grave openings to avoid any delays in making of interments,” Namias said.

The bill being considered in the New York State legislature would require the cemetery to expand insurance to cover repairs, rather than charging families, while increasing oversight of cemeteries and requiring cemeteries to provide detailed breakdowns of charges. Its sponsors are Queens Democrats Joseph P. Addabbo in the state Senate and Andrew Hevesi in the state Assembly.

The bill would also require that cemeteries with designated sections for certain religions, such as Mount Carmel, hire an inspector to ensure compliance with the practices of that religion. Cemeteries would also need to open outside of business hours when necessary to accommodate the Jewish practice of burying the dead before dusk on the day they died — as long as those requesting the extra hours are also footing the bill.

“This legislation will have a negative impact on all not-for-profit and religious cemeteries,” Namias said. 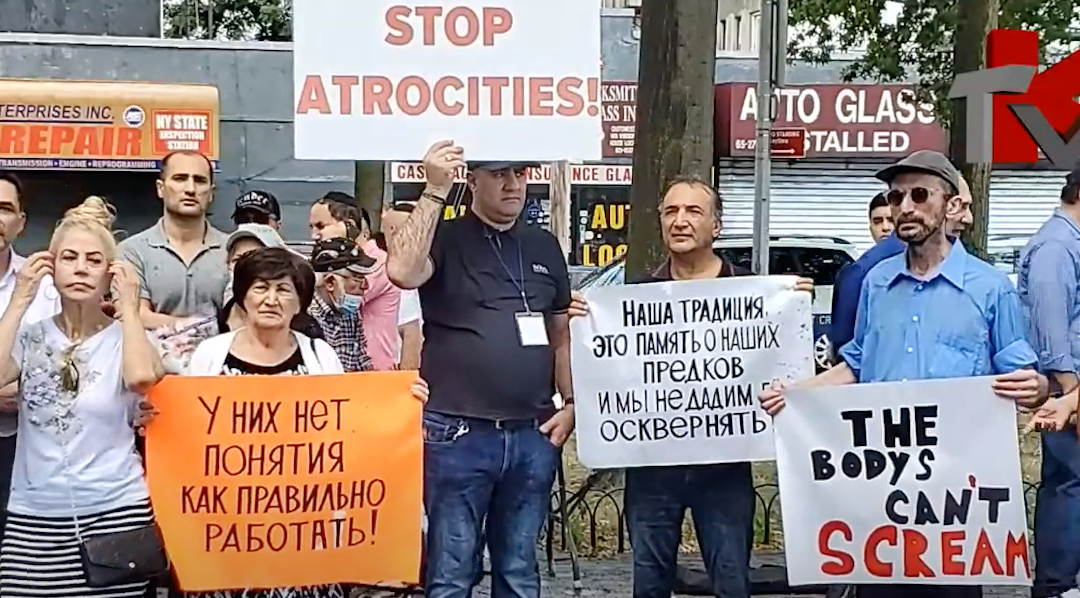 Members of the Bukharian Jewish community demand oversight of Jewish cemeteries during a rally in Glendale, Queens, Aug. 7, 2022. (KaykovTV, via YouTube)

The issues extend beyond the Bukharian community, whose members live largely in the Queens neighborhoods of Forest Hills and Rego Park, as well as ​​Kew Gardens Hills and parts of Brooklyn. When activists began sounding the alarm at Mount Carmel Cemetery, they found common cause with Ashkenazi families who also have loved ones buried there.

Among the notable Jews buried at Mount Carmel are the pioneering congresswoman Bella Abzug; Yiddish writer Sholom Aleichem; and Leo Frank, who was lynched by an antisemitic mob in Georgia after being falsely accused of murder in 1913.

Mount Carmel is not the first Jewish cemetery in New York City to face criticism of its maintenance. The synagogue that owns Bayside Cemetery is the subject of longstanding litigation over the cemetery’s conditions, which reportedly had not improved even after the synagogue, Congregation Shaare Zedek, benefited from a multimillion dollar property sale.

The Bukharian community is considering a lawsuit, too, Danielov said.

Such a move would mark a watershed moment for the community that began when Jews from Uzbekistan, Tajikistan and Turkmenistan arrived in New York City in the 1960s and swelled quickly after the fall of the Soviet Union. Now, there are about 70,000 Bukharian Jews in the United States, most of whom live in Queens, where Bukharian kosher restaurants offer traditional cuisine of the community.

Largely religiously observant and Russian-speaking, the Bukharians, like many immigrant communities, have grown more active in municipal affairs as their numbers and self-confidence have increased. During the pandemic, small Bukharian organizations came together to form the All Bukharian Community Network, which shared information within the community, provided meals to elderly community members, obtained personal protective equipment and communicated with external organizations and the media.

Now, the group is turning its attention to Mount Carmel cemetery — and to addressing other communal issues. “The people we have at ABCN are best suited for that position, and I think with that, we’ll be able to bring more and more changes to the community,” Danielov said.

Khaimov said the group’s activities marked a turning point for the Bukharian community in the United States.