Texas is shipping migrants to New York. A Jewish group is giving them a warm welcome. 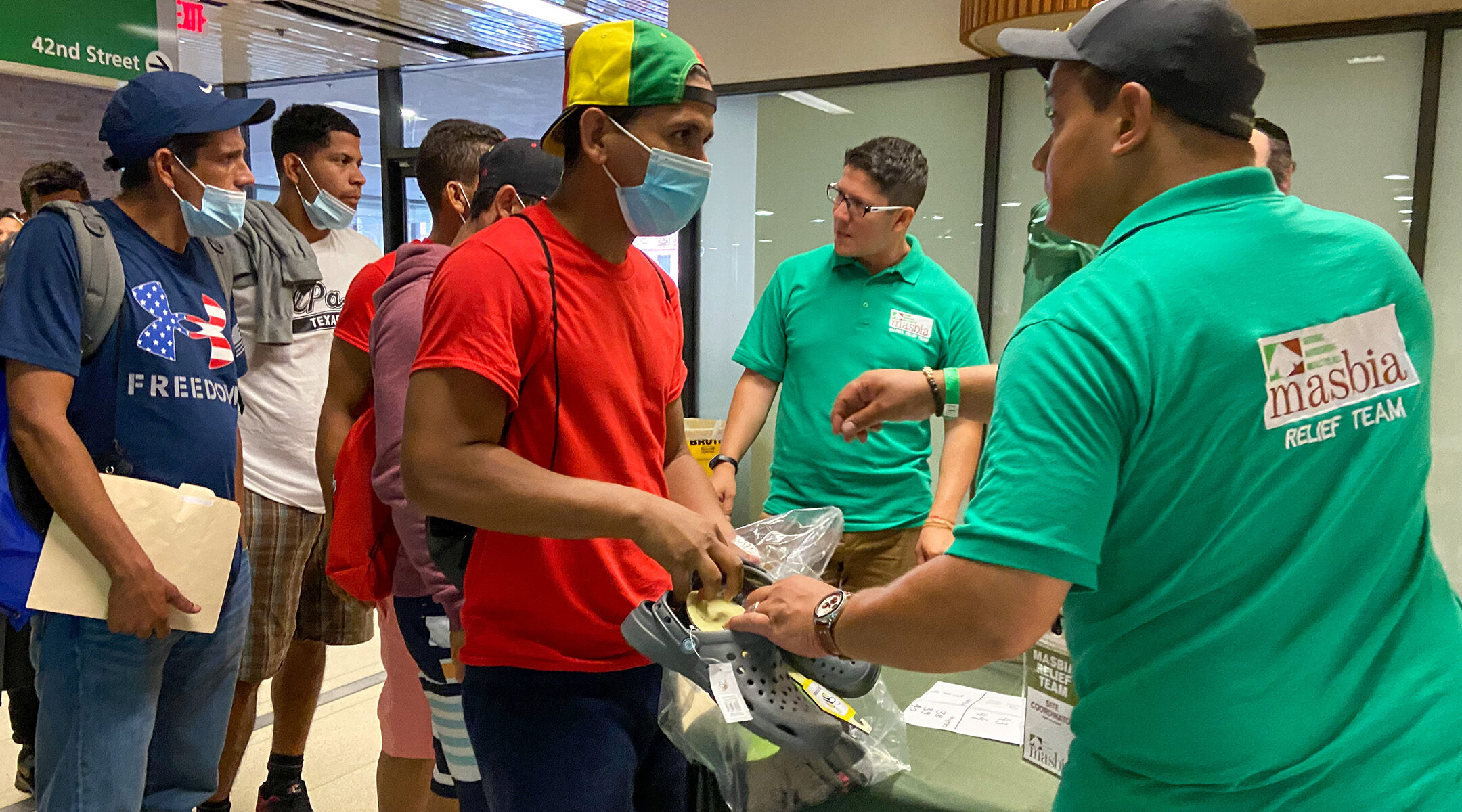 And when they arrive, Masbia, the kosher food pantry, is among the organizations there to greet them, providing shoes and smiles for hundreds of weary migrants.

“It is hard to keep up the pace,” Masbia Executive Director Alexander Rapaport told the New York Jewish Week, after his organization had been there for days, handing out hundreds of pairs of shoes they picked up from Walmart and Target. “It’s not a little sandwich we’re giving people.”

On Thursday, another busload of migrants arrived from Texas at 11:00 a.m. after a 72-hour journey. Among them was Anthony, a 22-year-old from Venezuela. He told the New York Jewish Week that his route north took him through the Panamanian jungle, where he injured his feet, leaving him “crying and depressed.”

“There are people who come for us in the jungle,” Anthony said. “They have shotguns, revolvers, they just run through us, take our money, our cellphones, rape our women, then go.”

He added, “A gentlemen of 60 years old, the people took and raped his granddaughter, he tried to defend her, and he also got raped.”

Anthony said he came to New York City alone, leaving his family behind in Venezuela.

“I don’t know anyone here,” Anthony said. “My family is very poor. I’ve been lucky to even get to New York. My goal is to get a good job and help my family back in my country.”

He added that he was apprehended after crossing into Texas, and border patrol officials asked if he wanted to go to New York.

“They put me on a bus, and here we are,” Anthony said. 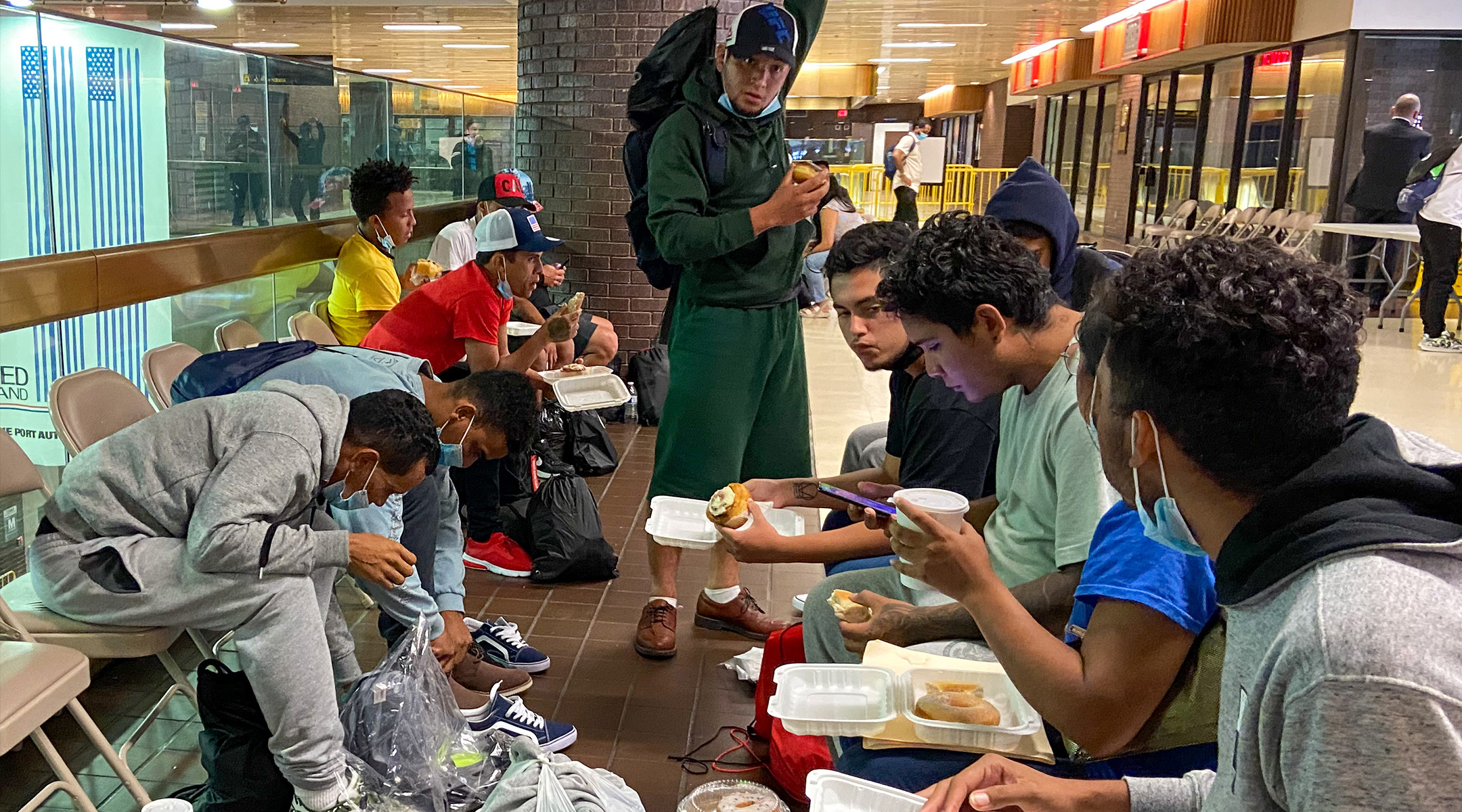 The buses are part of what the Republican Abbott says is a plan to pressure the Biden administration on border security; critics, including NYC Mayor Eric Adams, say it is an inhumane political stunt. In a New York Post op-ed on Tuesday, Abbot called Adams a hypocrite for calling New York a sanctuary city and then complaining about the new arrivals.

“They deserve more than being used by a governor who only cares about reelection,” Levy said.

Abbot said he began sending immigrants from Texas on Aug. 5, although New York City officials say it began earlier than that. Thousands of asylum seekers — including individuals and families, young children, people in wheelchairs, sick people — have arrived since then, often having worn the same clothes for months and confused as to how they ended up in New York. Five buses arrived on Wednesday, and another five on Thursday.

Masbia set up a table at the bus terminal with a three-foot-tall Statue of Liberty greeting the immigrants.

Ruben Diaz, a Masbia manager, said that the organization visited seven Walmarts, buying “six to seven carts of shoes” at each store. 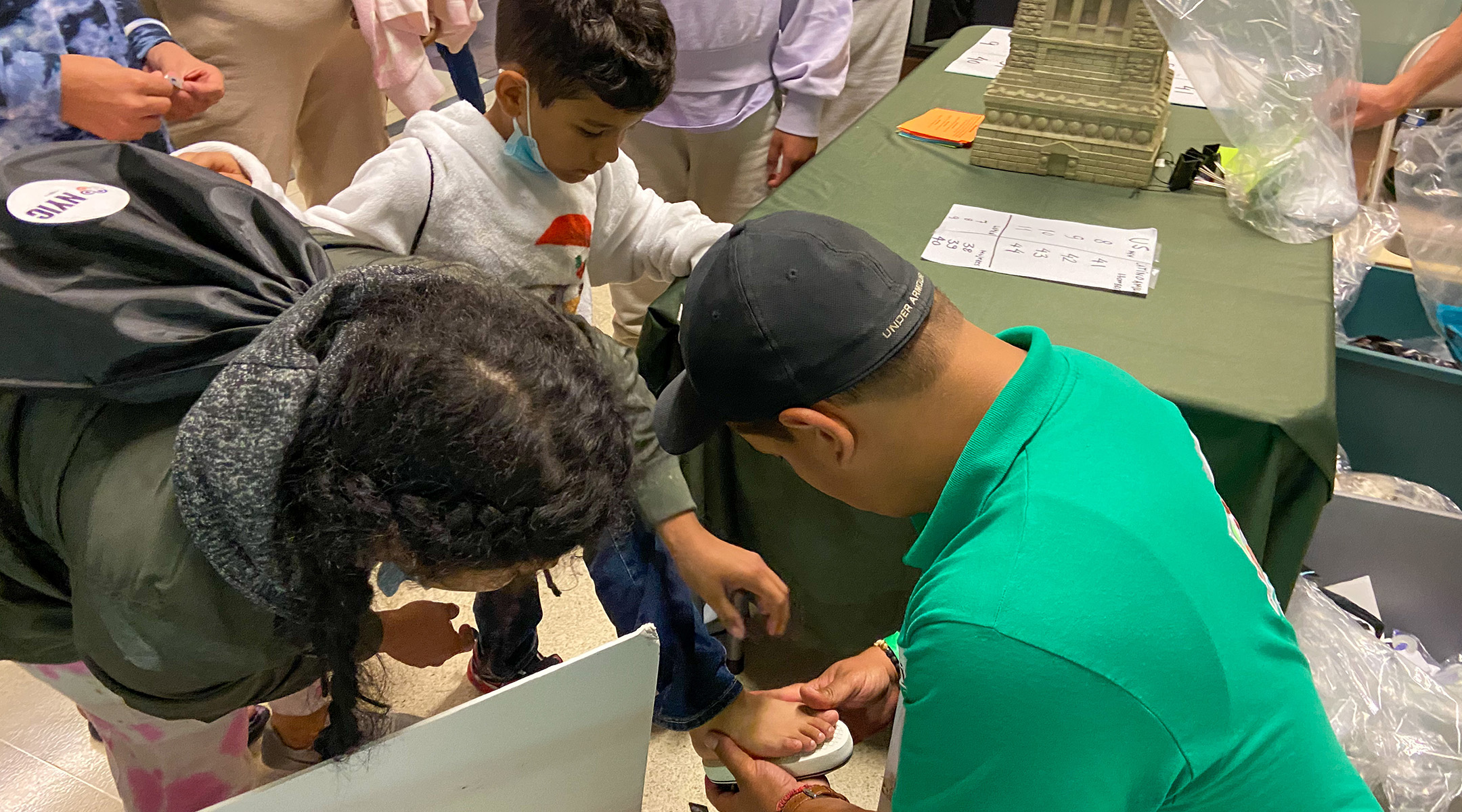 A Masbia associate in New York City fits a new pair of shoes for a child who came off of a bus from Texas, Aug. 25, 2022. (Jacob Henry)

“They thought it was a joke, some TikTok prank,” Diaz said.

Hearing Anthony’s story, Rapaport said he was reminded of his own family’s immigration story: His grandmother’s brother was killed in the Holocaust, leading his family to seek a better life in America.

“People are going through hell coming here,” Rapaport said. “It shows their perseverance. If someone is so determined, this speaks about their character. How bad must it be over there?”

Rapoport also saw reminders of the Holocaust in the wristbands the migrants wear on their arms, which appear to be a digital tracking service used by the Border Patrol in Texas.

Miguel Castro, commissioner of the Mayor’s Office of Immigrant Affairs, said at a press conference on Thursday that the barcodes are being used to intimidate people to stay on the buses. 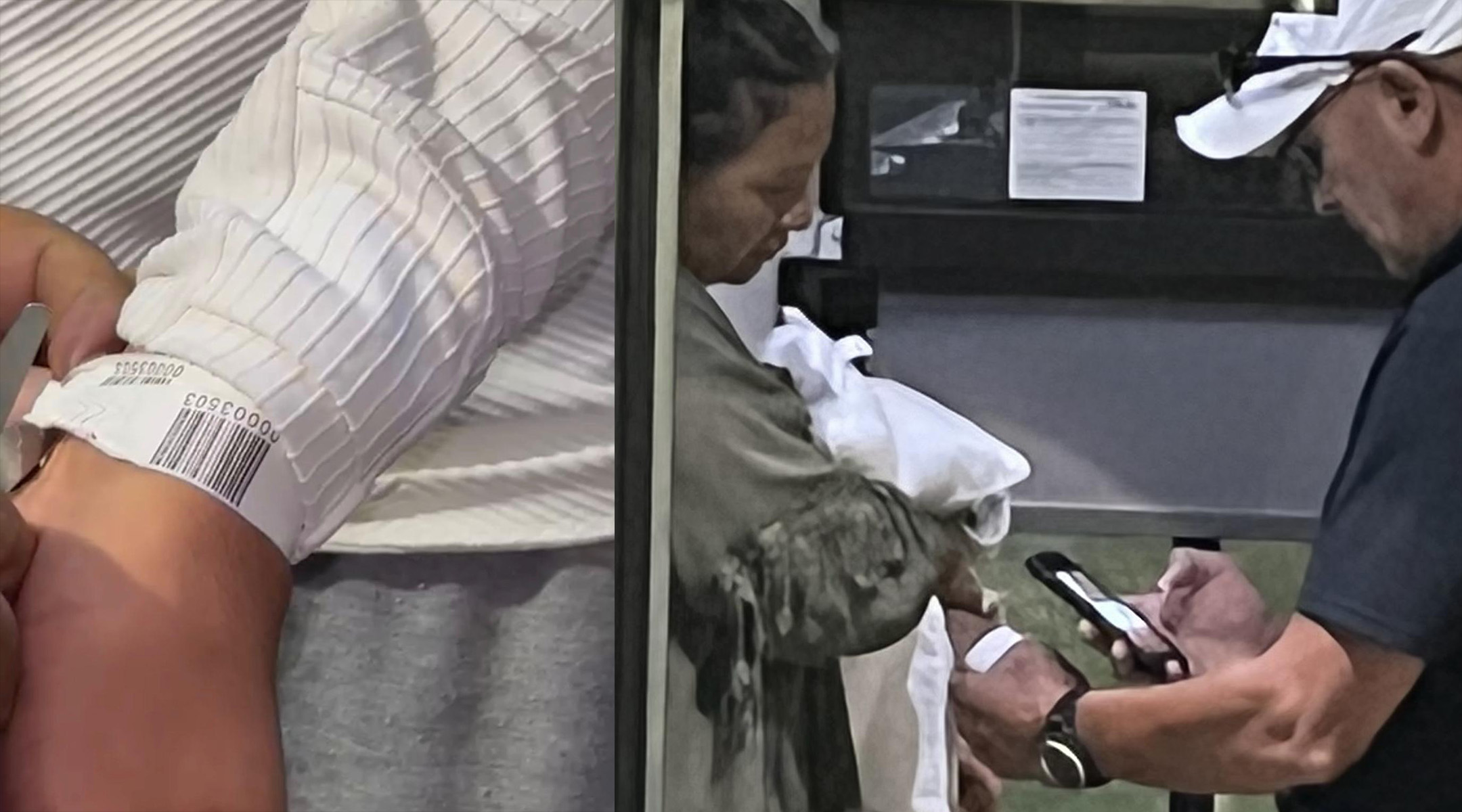 Rapaport said that the wristbands reminded him of the tattoos the Nazis used to tag concentration camp prisoners.

“When you see numbers on arms, where its digital, a barcode, it’s not the Holocaust, but there are traces of it,” Rapaport said. “It doesn’t need to be as bad as that to run away from it. It’s not comparable, but that doesn’t mean it’s not a lesson to not even get close.”

Shaina Coronel, the director of communication for the Office of Immigrant Affairs, told the New York Jewish Week that the city is providing food, water and legal and medical assistance.

“We’ve had people come off the buses needing immediate medical attention,” Coronel said. “A lot of them are coming COVID-positive. They’re traveling on a three-day journey, with very little food, with very little water. These are the conditions we’ve been seeing on the ground.”

She said that Abbott refuses to communicate with New York City officials and expects this to go on until November, when Abbott is up for reelection in Texas.

“He’s playing with people’s lives as if they were political pawns,” Coronel said.

Coronel said that New York is a right-to-shelter city, which means that by law, “New York is mandated to provide shelter for those in need.”

“We’ve adjusted,” Coronel said. “We’ve opened 13 additional spaces and hotels to accommodate the asylum seekers and their families that are coming here. And we’re continuing to adjust.”

She added that there have been “positive conversations with Washington, D.C.” about federal aid and they are “hoping to get an update soon.”

Coronel also brought up New York’s history, where millions of immigrants have arrived over the years, including the Irish, Italians, Jews, West Indians and Dominicans.

“The spirit of New Yorkers is all about coming together and saying we got your back as soon as you get here,” Coronel said. 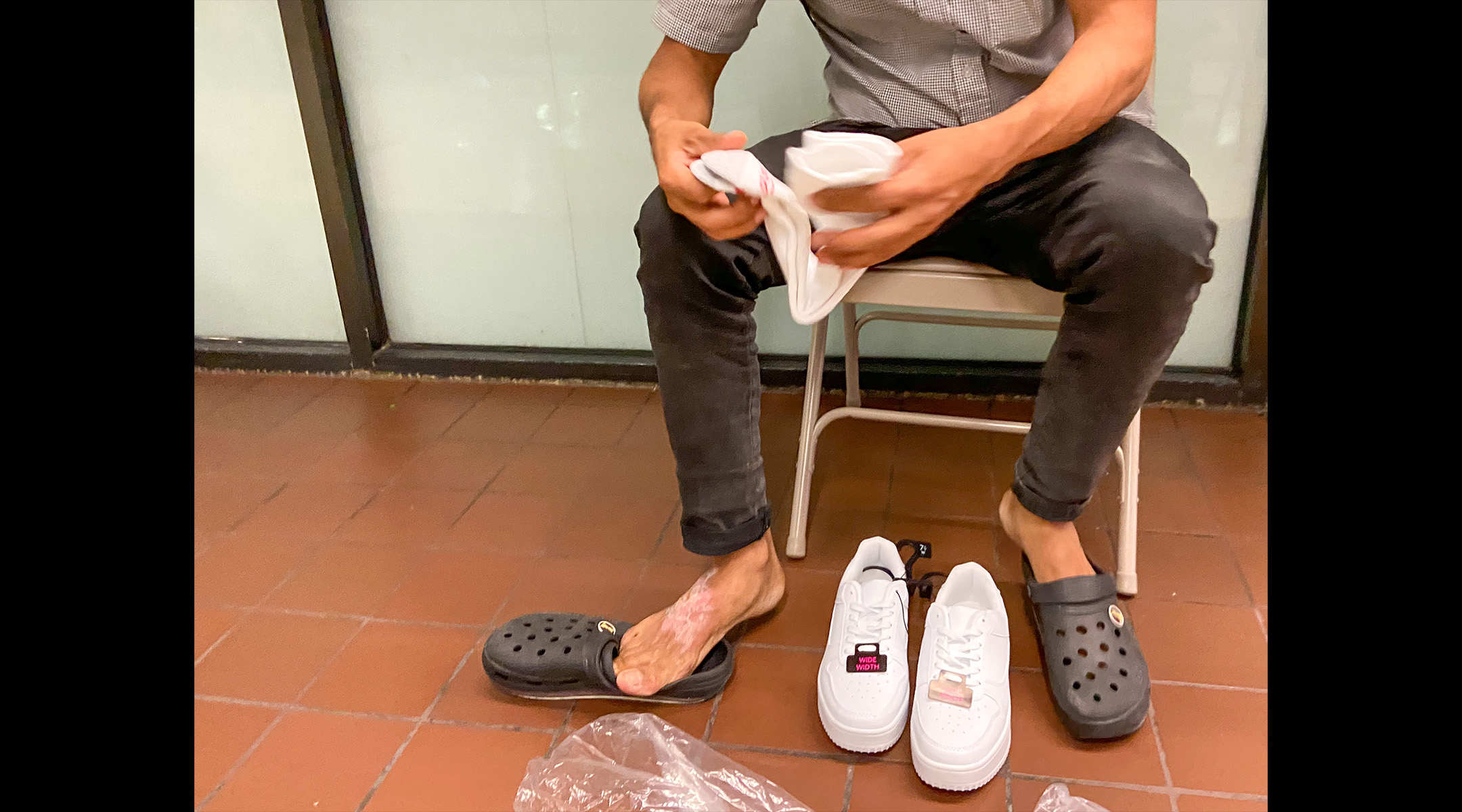 An asylum seeker changes into new shoes given to him by Masbia, revealing damaged skin from his three-month journey. (Jacob Henry)

From a Jewish perspective, Rapaport said giving shoes to asylum seekers is inspired by a verse in Torah saying how God protected the Israelites’ feet during their 40-year sojourn in the desert.

“These asylum seekers, their feet were destroyed,” Rapaport said. “There’s still going to be a lot of challenges. They’re navigating a new place. It’s not easy, but at least we put out these welcoming signs.”

He added another lesson from the Torah: “remember the stranger.”

“You can learn the Torah, but when something like this happens, you have to bring it into action,” Rapaport said. “It’s the basics in Judaism. We are very few generations on this soil. We all heard the stories of how our communities were welcomed. We want to give back now. This is what America means.”